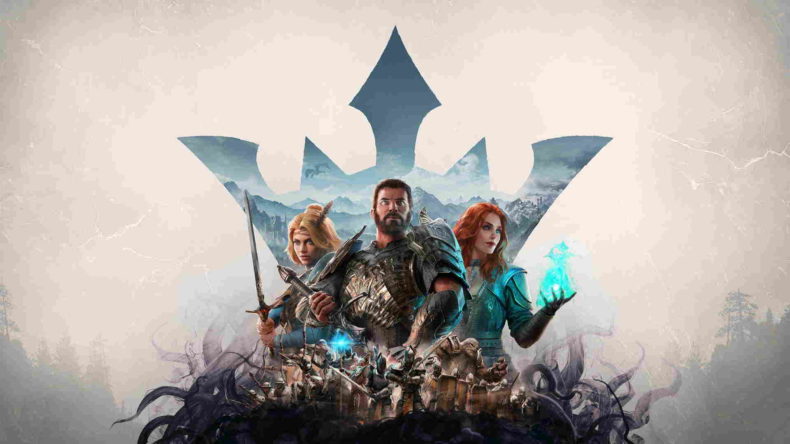 It says a lot about a game that can change someone so set in their ways as me. In a team, I’m always the support character of the group. I’m always the healer, the ranged attacker protecting my melee-favouring friends. And that inclination filters through into single-player too. I’m always the nice guy, the paragon, the do-gooder. But then along comes King’s Bounty II to throw that virtuous persona right in the bin. It’s got me flip-flopping from the people’s hero to an underhand thief and back again in the course of a few minutes. I’ve become a confused mess of morality, and I’ve never been happier to say so.

But, how did we get here? After selecting one of three characters, none of which are particularly nasty at all, I start in jail, only to be released by the order of the Prince to help him solve some of the urgent problems of the realm. Have no fear sire, your honorable hero is here. When you’re out in the world, it’s the general third-person RPG adventuring as you’d expect. Its fantasy setting is reminiscent of Dragon Age Inquisition, The Witcher 3, and Skyrim, despite not offering the location scale that those games offer. But King’s Bounty II does seem to manage to pack quite a lot into its world, with less general emptiness than those comparisons. It means you’re never too far away from a point of interest or a new quest marker.

The mechanic that ultimately called time on my otherwise unblemished moral compass though is King Bounty II’s Ideal system. Made up of two sets of opposing viewpoints, you’re often asked to choose during quests how to solve a certain problem. Think a doubled-up version of Paragon and Renegade from the Mass Effect series. Choosing certain options be it in Order or Anarchy, or Power or Finesse, awards you points in that Ideal. Then as you level up as a character you can add Talent Points into the game’s skill tree. But it’s split into the four Ideals. This means to unlock certain benefits, you need to earn enough of a certain type of Ideal Points. And here’s where the fun begins. 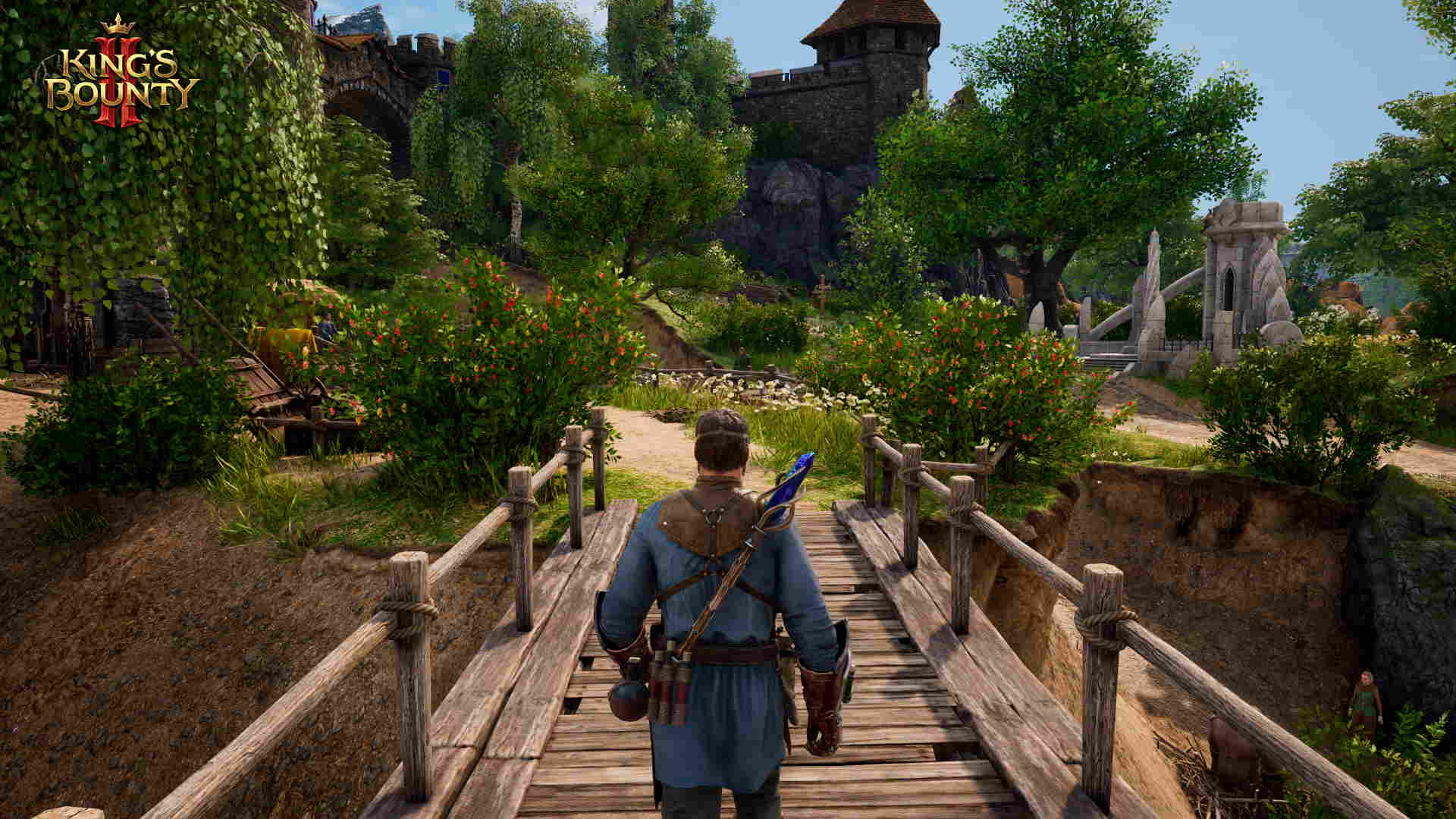 Back when I previewed King’s Bounty II, I’d stuck to my traditional do-gooder and had been rapidly leveling up the Order Ideal. But I realised some perks in the other Ideals I wanted and regretted my normal approach. So this time, I picked a few decisions and veer towards the evil side. Just to balance things up. Purely for perks, you understand? This way I could still look at myself in the medieval mirror. What I didn’t expect is to enjoy my underhand tactics as much as I did. A combination of the well-considered different resolutions King’s Bounty II offers and my new approach meant I’m really enjoying the truly varied interactions and resolutions. The story still ends up the same in the end, I guess. But this is a narrative more focused on the journey, and it’s certainly enjoyable.

Unlike some of its other fantasy RPG competition, King’s Bounty swaps free-flowing combat for separate tactical turn-based warfare. Battles happen in hexagonally-gridded arenas between two armies. Your role is to command your battalion of up to five different units to victory. Your armies, and as many reserves as you can afford only appear during battles. Presumably, at all other times, they’re taking residence in your back pocket, not constrained by the laws of time and space. 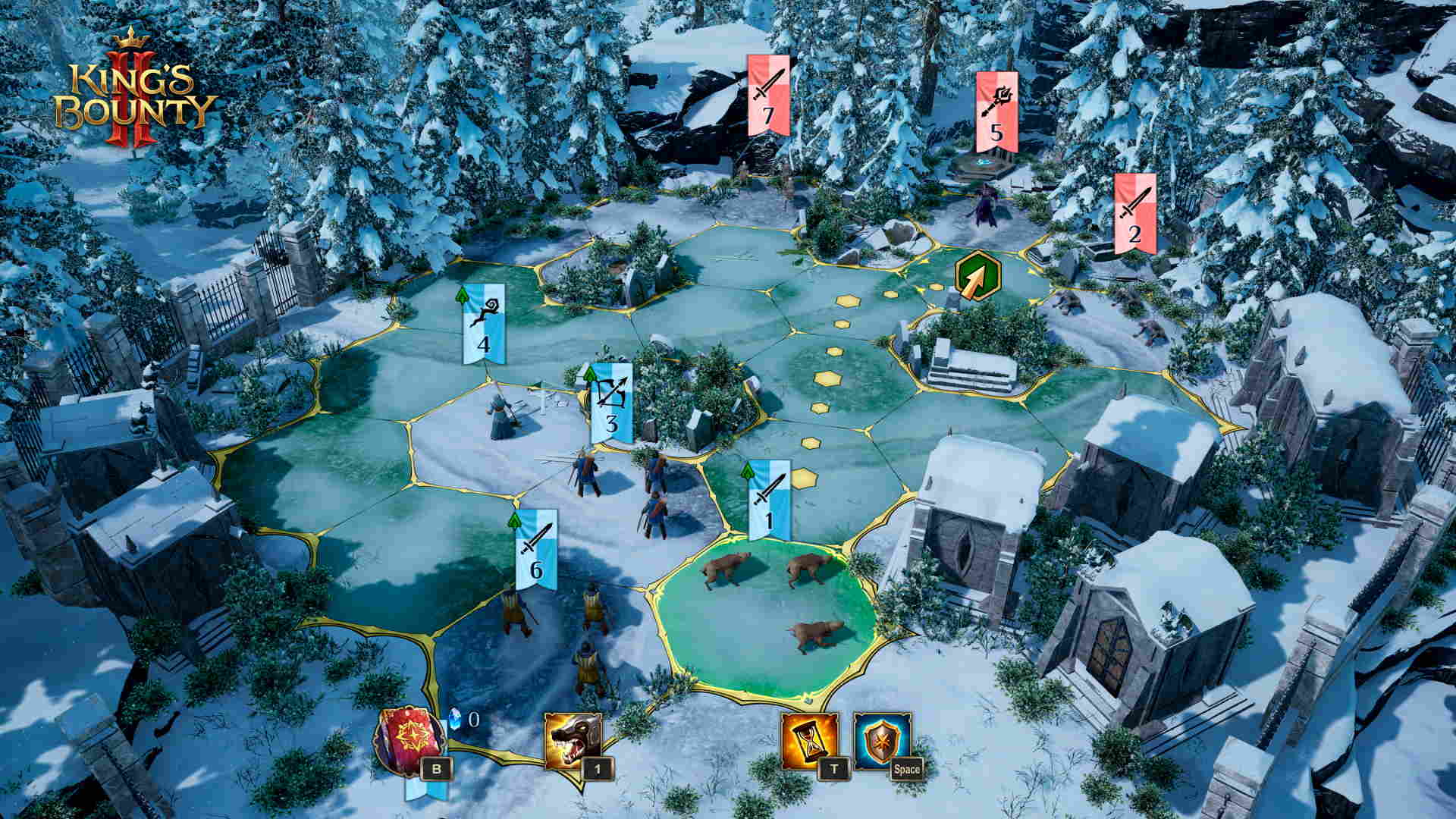 You can choose which units to take into battle considering the foe and the setup of the environment. Will you want more melee units? Or would you prefer to occupy high ground and attack with ranged units from afar? You can also choose to withdraw from battles if the opponents look too tough to take on and come back later. Some fights block progress on the map or certain quests, so they can’t be ignored forever. But the option to regroup and come back when you are stronger is certainly a welcome one.

There’s a lot going on in the combat, too. Each unit can move and attack each turn, but also has a special skill it can use. Some of these are one-time only uses in a fight, whereas others recharge over a certain number of rounds. As the commander, you also have a book of spells that you can use once a turn to try and influence proceedings in your favour. Certain enemies also do different damage to other units. Archers for example will struggle to damage skeletal enemies because they’re harder to hit with an arrow. Expected damage is shown before each attack so you always go into each attack knowing the likely outcome.

Up for a challenge

And you’ll need as much help as you can get. Particularly early on in proceedings as you cut your teeth with the battles. King’s Bounty II adopts a permanence to death a bit like Fire Emblem. If you lose a unit entirely it’s gone for good and must be rebought from your precious gold. Even if you lose two mages in a unit of four, you have to pay to recruit the difference if you want to maximise them for the next bout. And whilst there’s plenty of Gold and treasure hidden in the nooks and crannies of the world, it can be easy to get into a cycle of simply just surviving with a core army and using your remaining Gold to resupply the difference. 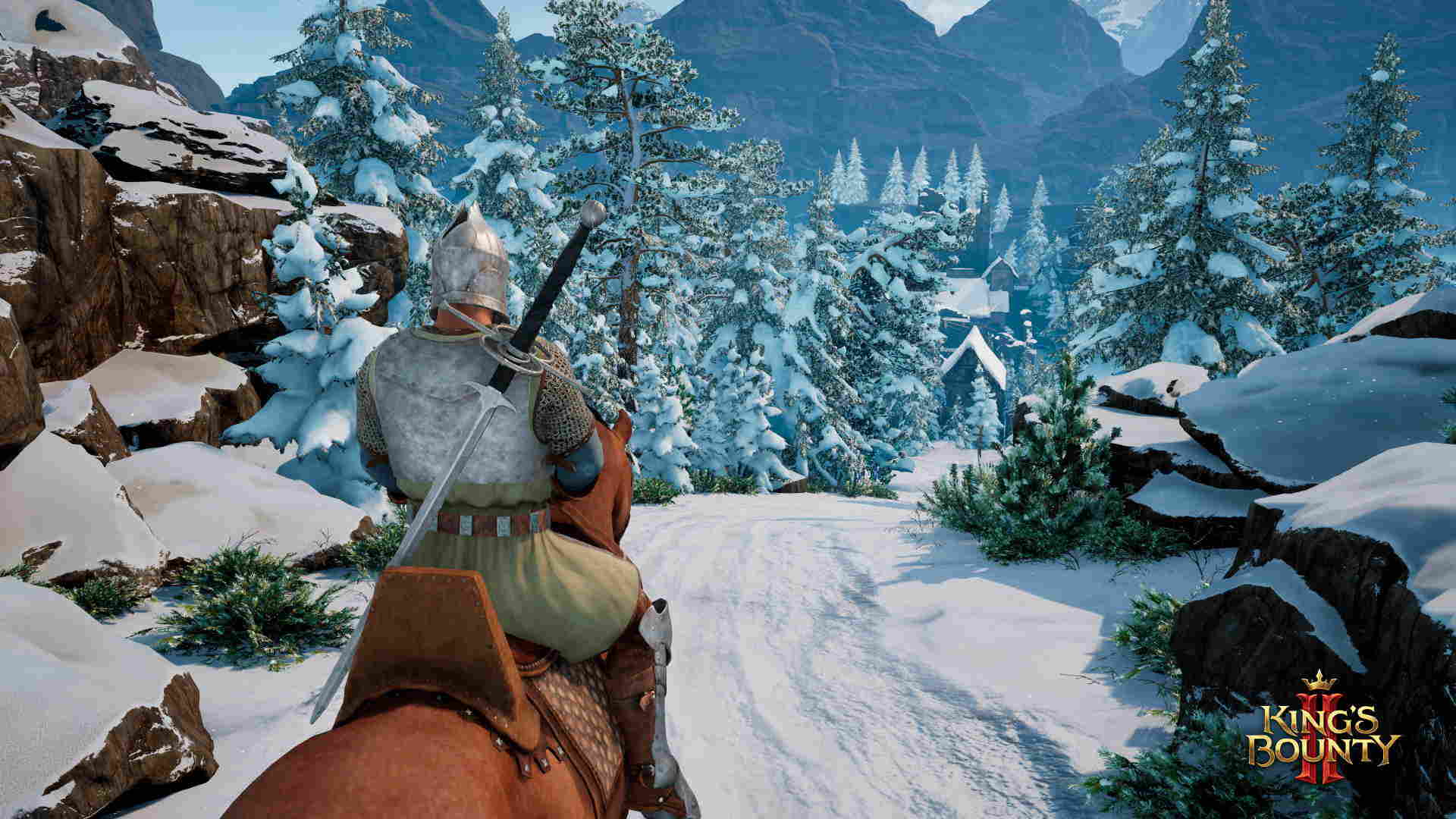 Going back into King’s Bounty II after having played it for ten hours in the preview, I found the initial battles much easier. Partly through having better understood the importance of being incredibly selective in my unit movements and actions. You can brute force your way through, but you’ll take heavier losses. And returning with hindsight I realise that you start to experience King’s Bounty II as it was designed – with an ever-increasing army to choose from – if you play smart from the get-go.

Getting to grips with it right away can be tough, not helped by some odd difficulty spikes in some of the unavoidable battles near the start. It’s a trial by fire, but if you save before each one and maybe retry the battle if you lose a few units even if you ultimately are victorious. The best way to learn is by experimenting, but at least this way you set yourself up right to enjoy the rest of the adventure.

The devil’s in the detail

And there’s certainly a lot of that here to enjoy, with a degree of detail that should be commended. NPCs are often heard chatting to each other inconsequentially,. This adds a feeling of life in the towns and settlements that you visit. You’ll hear gossip, arguments and commands being decreed, all happening outside of any questlines you’ll undertake. There’s plenty of lore hidden in books and scrolls which are entirely optional. And this details a sense of dedication to creating a world that feels lived in and has existed long before you stepped foot in it. 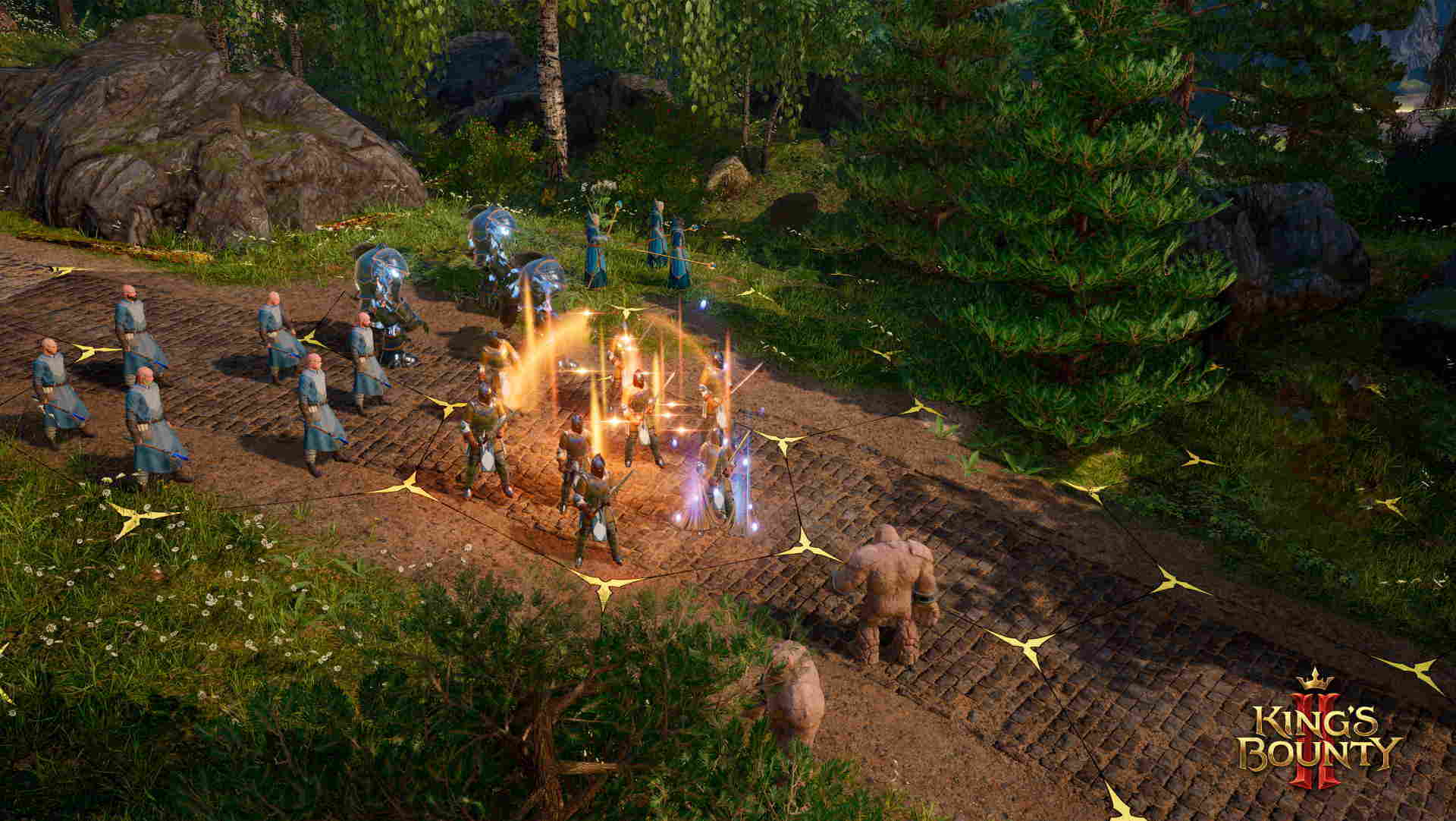 The world itself looks detailed enough. Up close some of the textures look less than inspiring and some of the character models look a little dated. It runs smoothly though, and the voices are well written and acted for the most part too. The music is fairly unobtrusive, particularly outside of battle, but fits the serene ambiance of the fantasy setting.

King’s Bounty II, by being both a fantasy RPG and a turn-based combat simulator, needs to excel in two quite different genres to succeed. And for the most part, it achieves what it sets out to rather well. It’s easy to get lost in the questlines you go after and the world feels full and believable. Running alongside that, the combat is deep and incredibly strategic, requiring your attention and grey matter to really experience it the way it wants you to.

So if you’re looking for a tactical RPG that actually requires some thought, King’s Bounty II is a fun, addictive experience. It’s packed with detail and the combat is varied throughout. It shows great respect to the genres it merges together and is a worthy addition to both.

King's Bounty II offers an enjoyable mix of a fantasy RPG and tactical turn-based combat that fans of both genres will lap up.