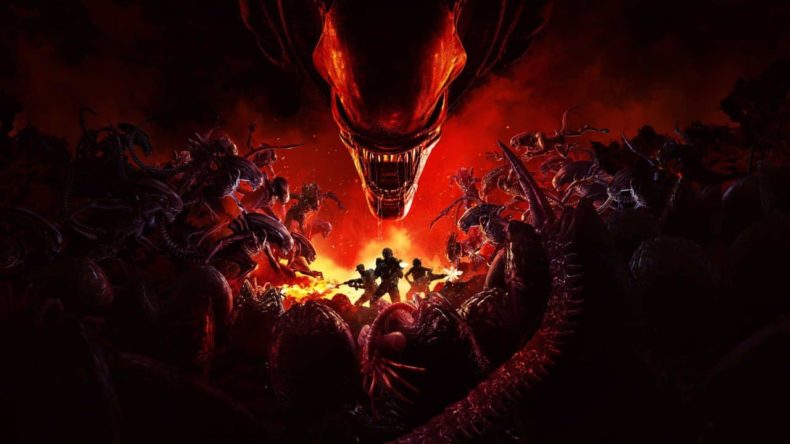 Primarily categorised as horror, the Aliens franchise is a series that arguably peaked with its first entry. While James Cameron’s gung-ho sequel is rightly celebrated, it was more action-packed war movie than slow burn horror. This change did it no harm at the time, but it’s a series that has struggled to really find solid ground since 1986. Alien 3 returned to the horror roots with some success (albeit heavily influenced by studio involvement), while almost every entry since has been considerably hit and miss. Games have been no different, and even though the franchise easily lends itself to several genres, this may be why Aliens: Fireteam Elite often struggles to find its centre.

In fairness, most games in the series have had a hard time capturing the essence of the franchise. The closest and most impressive attempt was Creative Assembly’s 2014 Alien: Isolation. Despite being somewhat drawn out, Isolation succeeded in nailing the sense of raw terror introduced in the 1979 original. Isolation did so well because it picked a genre and leaned heavily into it. It was designed as a horror game, with very few attempts at even dark humour, and very little full-on action. No game yet has managed to do the same with Aliens’ desperate bug-hunt action. Aliens: Fireteam Elite almost gets it right, but fails in some pretty key areas. 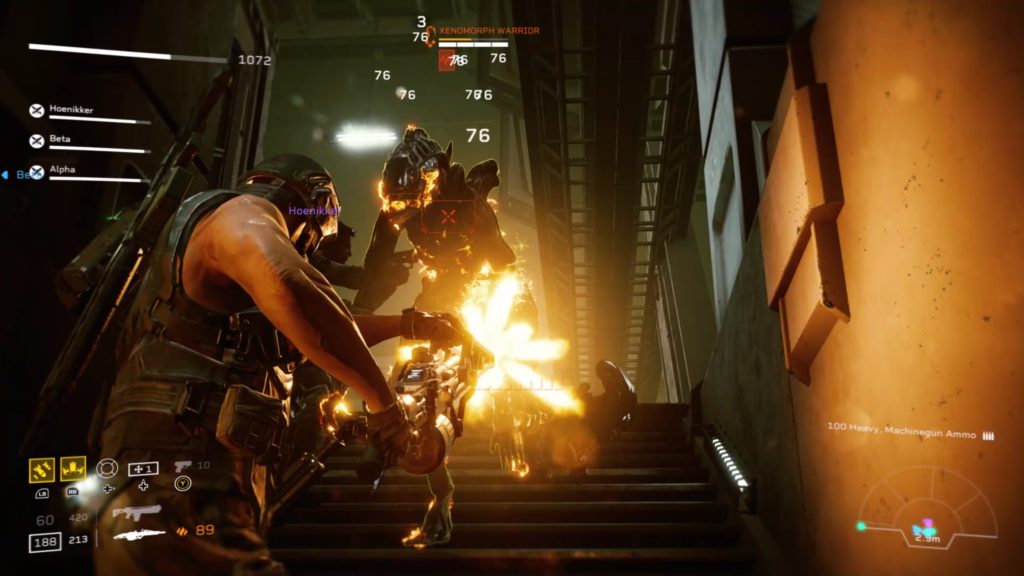 For example, it’s a bit of a tonal mess. Set some ten years after the events of LV-426, it exists in a weird place in the franchise timeline. We have a universe here where the Colonial Marine Corps seem to know all about the Xenomorph threat and are routinely dispatched to deal with the issue. This throws up a few problems. Firstly, it discredits entries like Alien: Resurrection because why would any company still be trying to breed these things covertly so far in the future? And secondly it begs a very important question. Why, when hunting a species that can insta-kill you on contact and will bleed concentrated acid all over you, would you go into battle with them wearing a sleeveless cuirass? Because that’s what you do.

CHECK IT OUT: The best (and worst) Aliens games so far

Modelled almost stubbornly on the aesthetic of Aliens, your band of rough tough hombres head into battle woefully underprepared. One medkit per marine, a squad of three when there are four distinct classes. No acid-proof gear. The list kind of goes on. You might think I’m complaining unfairly, but what’s the point of setting a game in this universe and then doing nothing remotely interesting with it? You’re shown to have synthetic combat units who can double as stand-in soldiers – so why risk human life and propagating the Xenomorph threat at all? 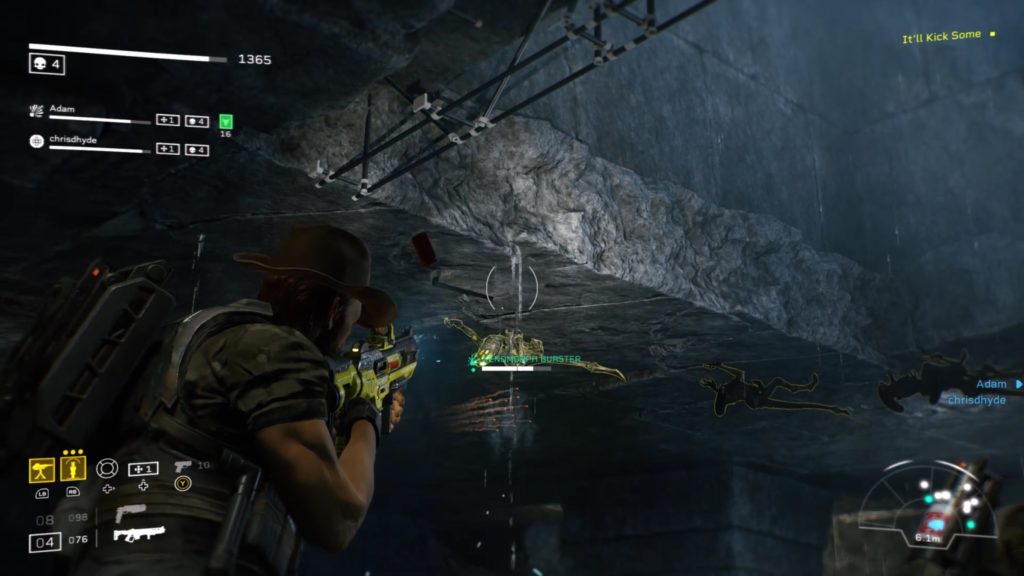 Anyway, the story follows that you’ve travelled to Katanga station, a research outpost on planet LV-895, where the dastardly Company are still trying to weaponise the alien. Makes sense, given the legions of weaponised tigers and honey badgers that real-world militaries deploy on the frontlines. Your squad of hardened space marines (or you and two fairly stupid AI synths if you play alone) are despatched on search and rescue missions to secure key personnel. Weyland-Utani have been experimenting with ancient technology, Xeno biology, and various other unethical sciences. This has led to the station and surface being overrun by aliens.

And I do mean overrun. There are thousands of Xenomorphs in this game. As you traverse darkened corridors and the one or two areas that aren’t darkened corridors, you’ll constantly be warned of approaching swarms. Aliens will come at you from all directions. Across the ceiling, up the walls, out of vents and ducts and doorways. Aliens: Fireteam Elite apes the Left 4 Dead formula just enough to be recognisable while also putting its own spin on most of it. Sadly, the standard enemies (literally referred to as “fodder” in the options menu), render the Xenomorph runner (based on the Dog Alien from Alien 3) about as threatening as medium-sized Collies. They run at you, and if they get through your hail of gunfire, will actually sort of headbutt you. This is a creature that has been shown multiple times to be an instant killer. Not in Aliens: Fireteam Elite.

CHECK IT OUT: What to expect from Knockout City Season 2 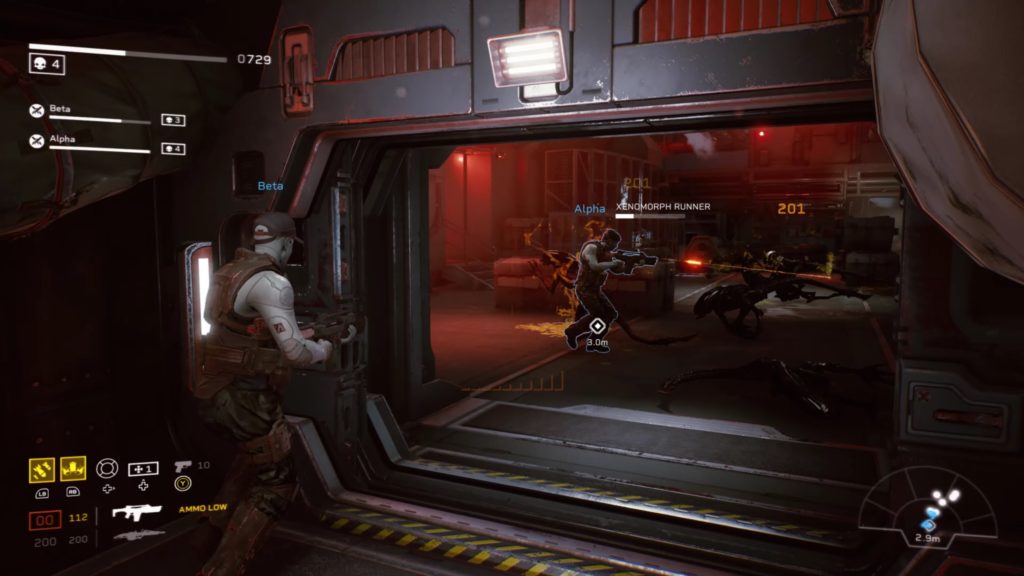 They mostly come at night

Much more threatening are the “big ones”. These come in various archetypes. There’s a Spitter, which spits. A Burster, which bursts near you covering you in acid. Then there’s the Drone, that will appear, do some damage, and run away. The Prowler hides in corners and doorways and pounces upon you, necessitating some QTE work. Weirdly, despite the acid blood visibly eating through the environment, it does no permanent harm to you even when you’re covered in it.

There are four Campaigns, each containing three missions. Despite the layout and enemies changing, the formula does not. Each mission sees you fighting your way to some form of machine that needs activating, which you then stand in front of until either a countdown ends or all the Xenomorphs are dead. This repeats on average three times per mission. I can’t pretend it’s not fun, but a little variety would have gone a long way. There’s one escort mission, and a pretty frantic escape in the late game, but besides those two moments, the gameplay is pretty similar mission to mission.

It’s elevated when you play with others, of course. Partly, this is because if you’re playing alone, you can’t make much use of the different classes. The AI Synths come in one bland flavour, with no special abilities to synergise with, and about as much spacial awareness as a half-blind hippo on roller skates. They shoot and throw grenades and will try to revive you before clearing any immediate threats, which basically means if you go down when solo, you’re probably going to fail. 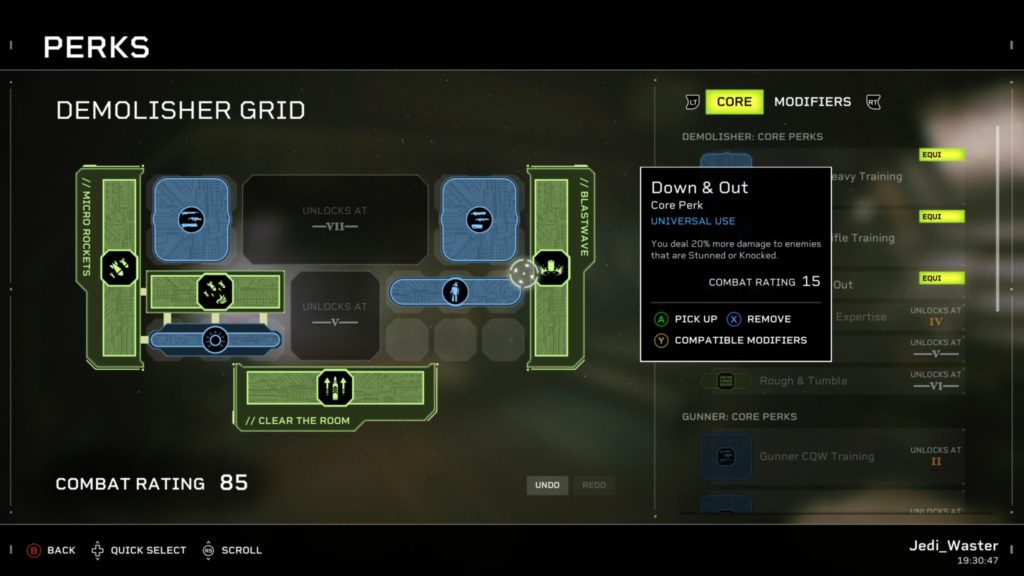 There’s a fair bit of thought behind the classes, though. The Gunner is your standard shoot-and-explode-stuff class, but the Doc can heal and buff the group, and the Technician has a rechargeable auto-turret. By far though, the best class to play as is the Demolisher. Silly title aside, this class can carry the standard M41A1 Pulse Rifle, as well as the rig-mounted Smartgun. And by god, is the Smartgun fun. It fits perfectly in universe, mows through enemies in seconds, and has so much ammo that Coldiron will probably nerf it. You can swap it out for a heavy flamethrower, grenade launcher or RPG, but you won’t. It’s too cool. The Demolisher also has a downblast that stuns enemies (including armoured Warriors) and shoulder mounted rocket launchers. It’s just mental.

As in Left 4 Dead, enemies randomly spawn, and the hidden cache containing decals, weapon skins and gun mods moves around each time. You’re never quite sure what’s coming, which when playing with friends really elevates the tension. For a few missions, you’ll face enemies with guns, at which point Aliens: Fireteam Elite turns into a very competent cover shooter. As you level up weapons through use, they’ll increase in usefulness thanks to quicker reloading or improved damage. Leveling your class, however, gives you perk slots into which you can socket buffs and mods to improve your survivability. It’s a solid system with a huge amount of options.

CHECK IT OUT: Arigami 2 is a fun twist on the classic stealth game 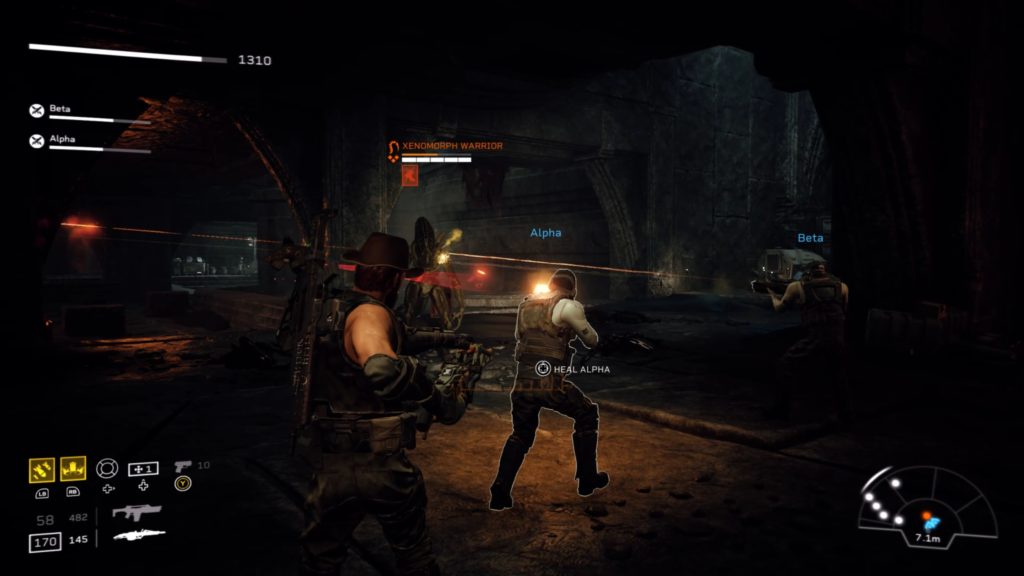 The writing lets it down, though. One moment your intel officer, Herrera, is making jokes about the Aliens’ lethality, the next you’re supposed to be scared when an NPC squad you’ve never met is killed off-camera and you hear them screaming. The tonal shift is weird. Herrera gets all serious and grave, then is right back to cracking jokes a few minutes later. Fireteam Elite struggles to pick a lane. On one hand it wants the gung-ho abandon of Aliens, on the other it wants the deep space horror of the original. Sadly, it works about as well here as it did in AVP.

Once you finish the fourth campaign you’ll unlock a 5th Class, and Horde Mode. I spent a while in Horde Mode alone and with others and, honestly, it feels no different to the game. Yes you can buy consumables between waves, but the rewards are so stingy that you’ll barely afford anything useful each time. It needs some serious balancing. But then, so does a lot of the game. When the normal enemies take one burst of a Pulse Rifle to obliterate, and a Warrior takes rockets, mines, and two full clips of a Smartgun, something isn’t calibrated right.

There’s some variety thanks to Challenge Cards, which impose a difficulty modifier for increased rewards. They come in a few rarities, but there’s no real penalty for failing the set challenge. Oh, and you can’t stop. Like, ever. Each mission is around 20 to 30 minutes long, and you can’t pause the game. There are also no safe spaces, and standing still for more than ten seconds will attract prowling Xenos. It’s annoying, and because there are no mid-mission checkpoints, you’ll need to finish the one you’re in every time or start it again. 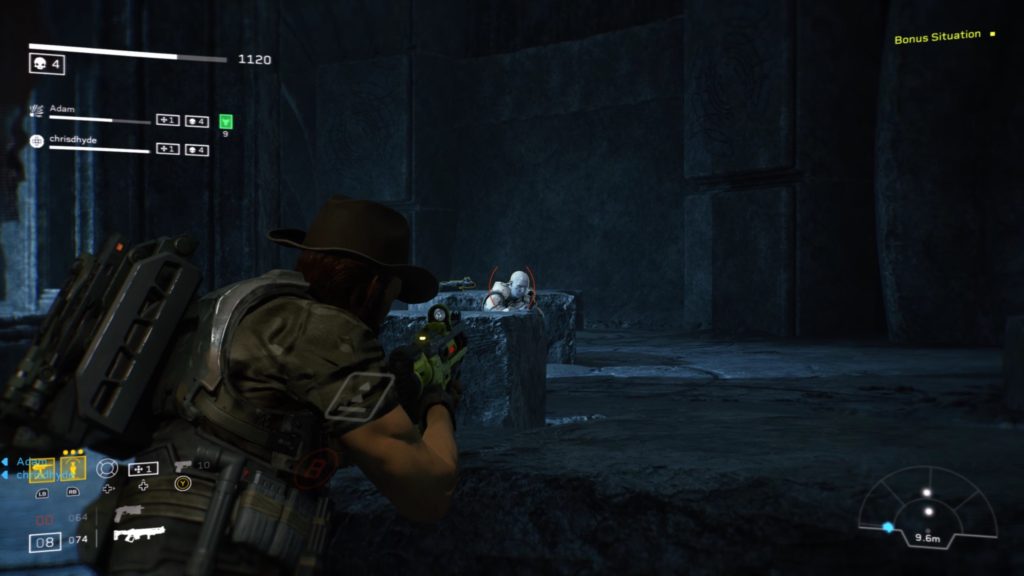 Perhaps the biggest plus in Aliens: Fireteam Elite’s box is the most obvious: it’s set in this universe. There are so many iconic lines, sounds, sights, that fans of the franchise will easily forgive many of the shortcomings. The ping of the motion tracker, the squeal of the Xenomorph – even sound effects like a marine grunting in pain I swear are taken from Cameron’s movie. The atmosphere when the Aliens are swarming at you, and alarms are beeping, the tracker is going and the Pulse Rifle is screaming in its legendary rattle-whine… Fireteam Elite nails this for a few minutes at a time, and it’s enough. Just.

A cross between a Left 4 Dead style team shooter, a class-based RPG like Outriders, and tower defence, Aliens: Fireteam Elite does some impressive things with the sights and sounds of its universe. Strip away that element, though, and you’re left with a fairly repetitive third-person shooter that struggles to tell an engaging story or deliver enough raw excitement to sustain you through the dull moments. It’s an absolute win if you’re a franchise fan and you stick to the multiplayer; if you’re a solo player and the universe does nothing for you, there’s not much here worth exploring.

Aliens: Fireteam Elite is an absolute win if you’re a franchise fan and you stick to the multiplayer; if you’re a solo player and the universe does nothing for you, there’s not much here worth exploring.