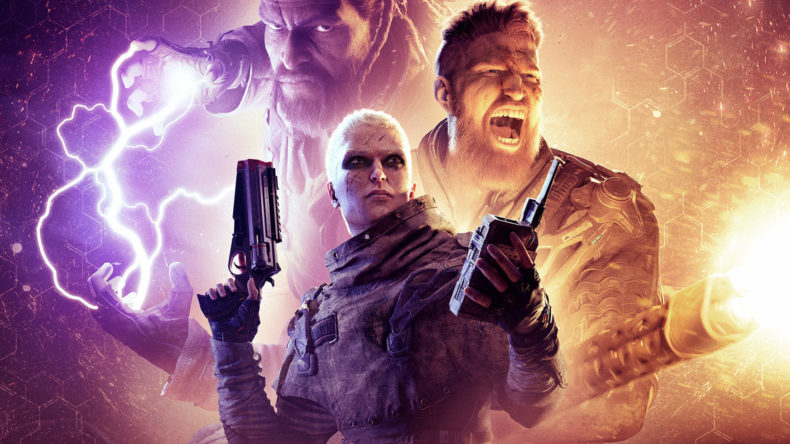 Outriders, from People Can Fly and Square-Enix is a looter shooter RPG that leans so heavily into its core concepts that everything else becomes just another support joist holding it all up. Story? It’s a bit like Anthem and Destiny, but with swears. Character development? Dig for it a bit and you’ll find it. World-building? It’s there if you’re interested. But ultimately, Outriders is a game about whoosh-banging things to death until they spit out loot in a variety of ever-more desirable colours and then strapping on your new pants and shotgun and doing it again and again. And that, frankly, is bloody great.

There’s something very unpretentious about Outriders. The simple enough plot sees humanity leave Earth in search of a new world to colonise and coming upon Enoch, a geographically diverse world with breathable air, a host of alien nasties and The Anomaly, a huge global energy storm that either vapourises or force-evolves any living thing it comes into contact with. It makes animals big and angry, and, in most cases, grotesque, while the people it doesn’t reduce to squishy atomic particles it enhances. These humans become Altered, and are able to manipulate various natural and unnatural forces to essentially do space magic.

Your protagonist is one such, thankfully. Hit by the Anomaly shortly after landing, they were then wounded and forced into cryostasis for thirty years before emerging into a world that has quite literally gone to shit. The humans of Enoch are stranded there, you see, lacking sufficient technology to communicate with or reach the Flores, the colony ship that has been stuck in orbit for three decades. In this time, rather than pull together and attempt to overcome adversity and struggle to establish a new colony using the abundant natural resources afforded them by such a lush world, they have instead decided to factionalise and wage bloody, savage war on each other complete with trenches and tanks and none-too-subtle World War II motifs. But, y’know, with giant spiders and space magic. 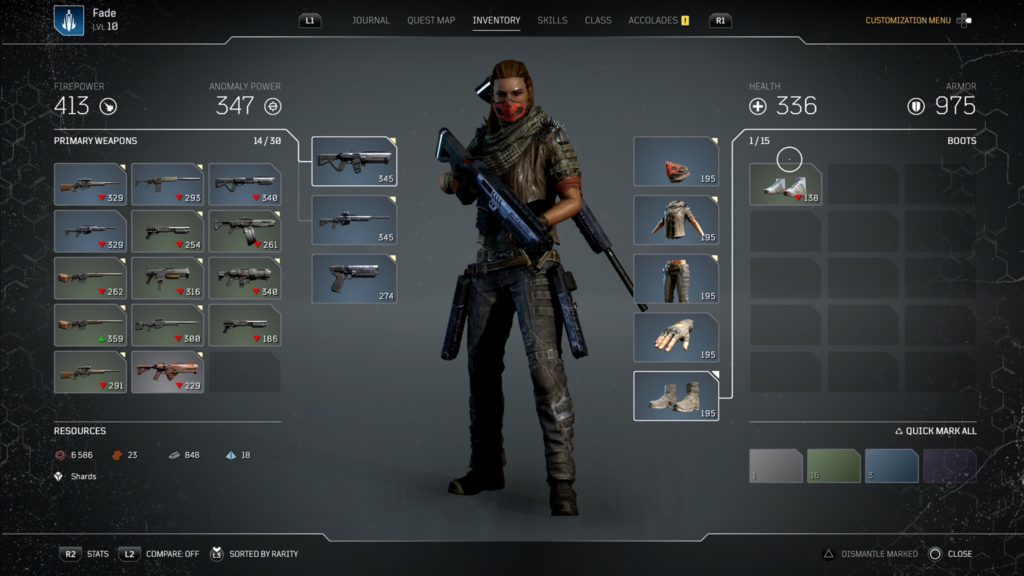 It’s difficult in this day and age to consider that a great deal of Outriders’ plot relies quite heavily on the protagonist not washing their hands, but here we are, blasting and exploding our way through a story that hinges on a frequency drawn on their off-hand with a Sharpee that may allow them to finally make contact with the Flores. In the meantime you, as them, will engage on various skirmishes and missions into enemy lands to rescue VIPs, liberate sites of strategic importance, defeat pockets of enemy resistance and generally blow countless holes in the countryside in the name of survival. Oh and there’s a cover mechanic, but honestly it feels like the more you use cover beyond a place to catch your breath and reload, the more you’re punished for it. Enemies will get bored waiting for you to put bullets in their faces and come to you, smiles affixed, to make it easier – and you can only heal through dealing damage and killing mobs, and so the onus is on getting into the thick of the action regardless of which class you play.

As an Altered you are given the option of four classes once you get through the Prologue. Devastator, a tanky class that deals with heavy damage and survivability; the Pyromancer, who unsurprisingly likes to burn things; the Technomancer, who can inflict enemies with toxic damage and summon turrets and gizmos to aid them in a fight; and the Trickster, who can play around with time and space to slow enemies, evade damage and teleport around the battlefield. Each class can equip three skills at any time, which you’ll unlock as you play, and a lot of the loot you gather is designed to synergise with these skills to create powerful builds.

In fact, the loot itself is one of Outriders’ greatest strengths. People Can Fly have done the impossible and launched a looter that doesn’t need endless patches to make sense. While there are elements of imbalance, these are mostly skewed in the player’s favour and, as there’s no PvP, this isn’t an issue. If the odd skill or weapon is a little overpowered, so be it – Outriders’ “World Tier” system exists so that you can up the difficulty at any time if you feel you’re a bit too powerful for a given mission. 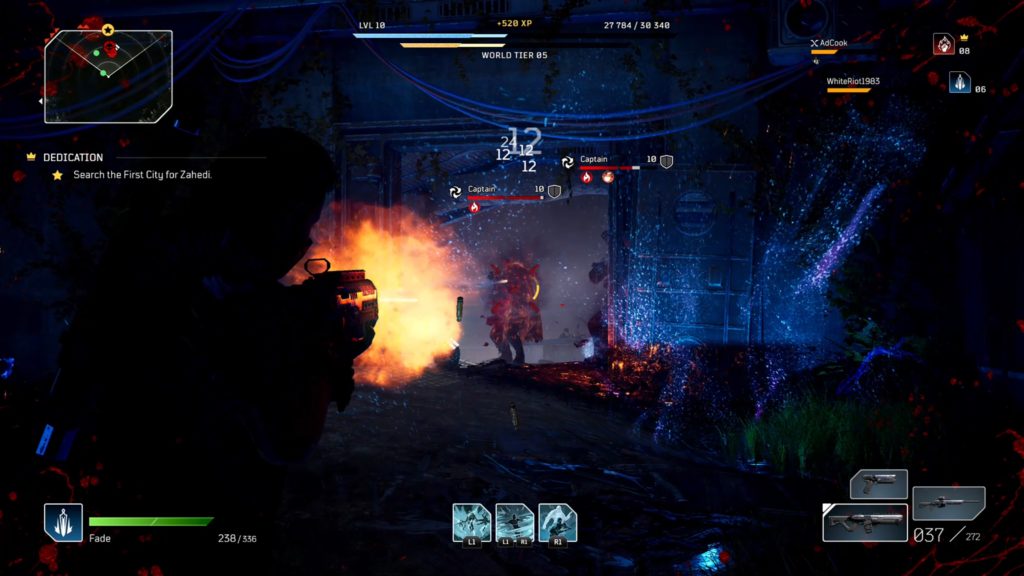 Similarily to Diablo 3, Outriders’ difficulty system allows you to play the same content over and over but with tougher enemies and concurrently better rewards. The tougher you make it, the better the loot drops are, and the stronger you can become. You can set the World Tier back at any time, too, which will make it a little easier but prevent you from earning progress towards the next one.

There’s also a strong element of character progression as you earn XP to unlock new abilities, wear better gear, wield stronger weapons and look more and more badass as the game moves on. Crucially, the more time you invest in growing your character, the more build options you’ll unlock and loot as you power towards the endgame. This will take around 12 to 15 hours for most people, at which point the grind for better loot and challenge becomes the primary focus.

Outriders’ endgame is a collection of 15 repeatable encounters called Expeditions, which reward successful players with showers of loot that will get progressively better and goes far beyond the character level cap of 30. It’s difficult to tell yet if the endgame will have real legs, but hopefully People Can Fly will be able to support Outriders for years to come with updates and DLCs despite it apparently not being a live service game. 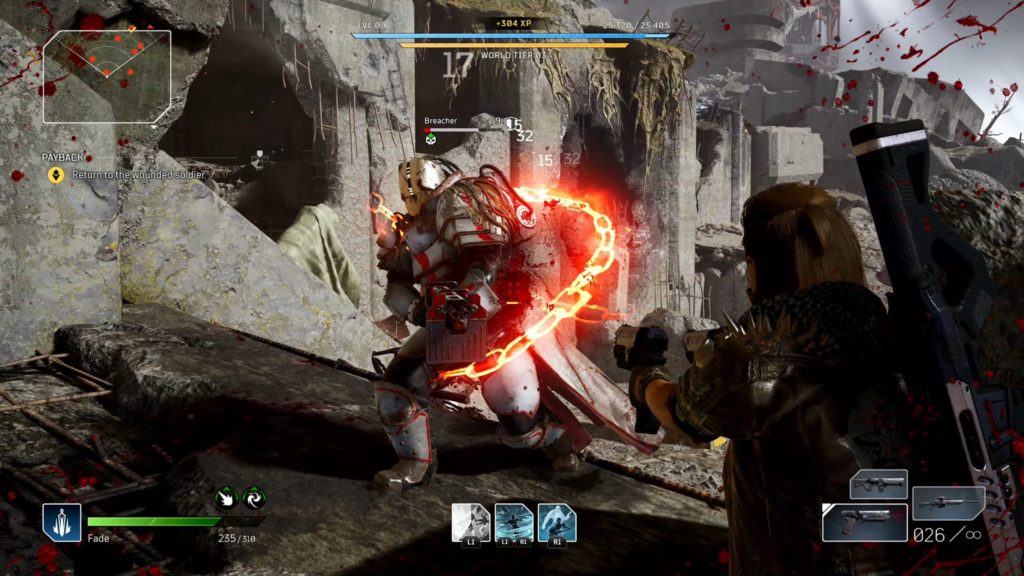 The biggest issues I’ve come across so far are all performance-related. Gamely PCF have listened to feedback from the month-long demo period and added the option to remove the excessive motion blur, and you can also reduce the nausea-inducing camera movements during cutscenes – but you can’t switch this one off completely. Instead the option kind of anchors the camera in place like a length of rusty chain on a junkyard Doberman and it will keep trying to break free, leading to sudden jarring swings, weird vibrations, screen glitches and odd camera angles. Also, the cinematic direction is fairly poor throughout. Most scenes end with a pretty heavy fade-to-black that always feels out of place and even cuts off some of the dialogue, while random cutscenes – also book-ended by long fade-outs and ins – show your character doing mundane things like hopping over a broken bridge or opening a door.

Which version is best?

Graphically it performs okay on next-gen hardware – and I do mean next-gen. The difference between the Xbox Series S version and the Series X or PS5 is very noticeable. Playing on PS5 I’ve found Outriders’ various locations to be highly detailed and diverse enough to keep me interested, while some of the backdrops are pretty impressive. Enemy design isn’t overly varied, though. There are three main factions with various repeating archetypes and a handful of different monsters, but by and large you won’t see an awful lot to get excited over and by hour 20 you’ll have seen everything enough that you’re kind of hoping for something different to come along. 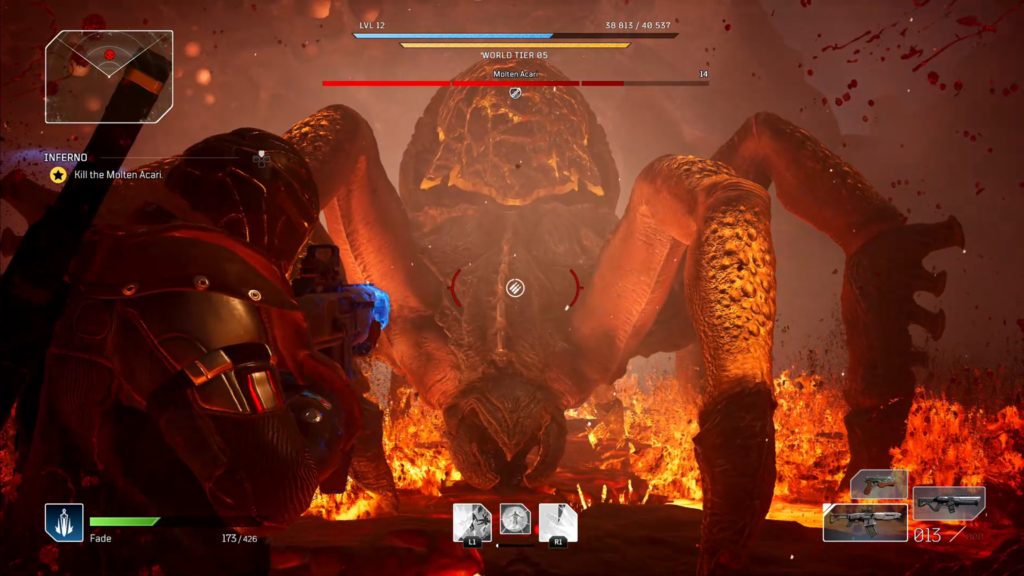 Outriders is not without fault, from graphical glitches to balancing, and it has been plagued by frustrating server issues from launch up until the time of writing, and yet its strengths far outweigh its weaknesses. For every out-of-place animation or clunkily-delivered line of dialogue, there’s a new gun or power to wield that brings the smile back to your face. Jumping into a mission with friends or strangers via the matchmaking stations brings another element to the action, allowing you to synergise certain skills and abilities while facing off against tougher and more numerous enemies and bosses that can wield the same abilities as you do. Gear is in abundance, and there are so many different designs and colours that you’ll rarely see two characters that look the same.

Aside maybe one or two games I could mention, Outriders is the most fun I’ve had for the last half a year, and certainly one of the most promising new IPs I’ve played in some time. If People Can Fly continue to iron out the kinks and introduce new elements into the game via DLC and updates in the months to come, Outriders could well be a game that takes a spot beside Diablo 3, Destiny 2 and Monster Hunter Rise as one of my regular loot-grind go-tos for the rest of the year and beyond. There’s a little jank in the tank for sure, but what’s here is a heap of fun for fans of looter-shooters, RPGs, and blowing the hell out of things with friends.

Despite a largely forgettable story and a few misfires, Outriders is a great looter shooter that feels satisfying to play alone or with others and easily holds its own among contemporaries.