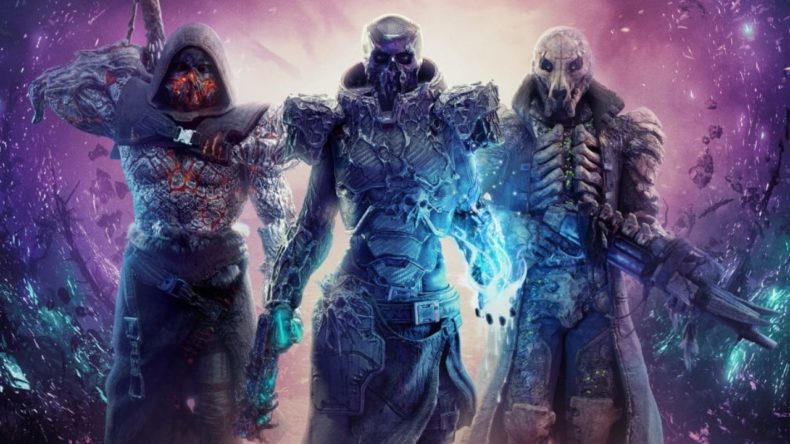 We liked Outriders when it launched earlier this year. Its strong loot game, interesting setting and satisfying mix of gunplay and space magic made it an immediate favourite. It was – and still is – also a blast with friends. Despite many gamers being prepared ahead of time to hate on it a little, People Can Fly delivered a solid entry into the looter-shooter genre, which was up to now fully dominated by Destiny 2 and The Division 2.

Now, 6 months after release, People Can Fly and Square Enix have revealed the New Horizon update – and we got to play it ahead of time. Surprisingly, though, we’re not here to tell you that this free expansion is about to revolutionise the core Outriders experience. Because it isn’t; rather, New Horizon is intended to lay the groundwork for persistent support going forward. 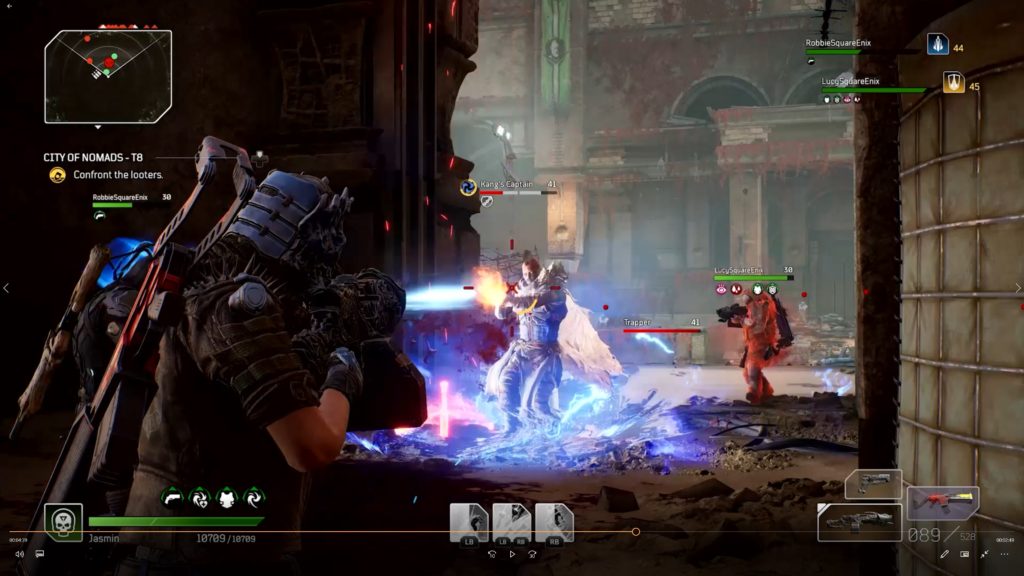 It adds four new, large-scale Expeditions, and introduces a much-requested transmog system called “meshes”. As Outriders has such cool gear design in the late game, this is a massive win. Unfortunately though, Outriders: New Horizon doesn’t increase the level cap, or add new skills or gear. This is very much the beginning of something, rather than the be-all and end-all.

The four new Expeditions take place in a variety of locales, and are designed to test even the hardiest players. As with the main game, if you want the best loot you’ll need to play on higher world tiers, and survival is a tall order. One significant change is the removal of mission timers from Expeditions. You’ll still be rewarded for efficient play and teamwork, but the onus is no longer on speed. 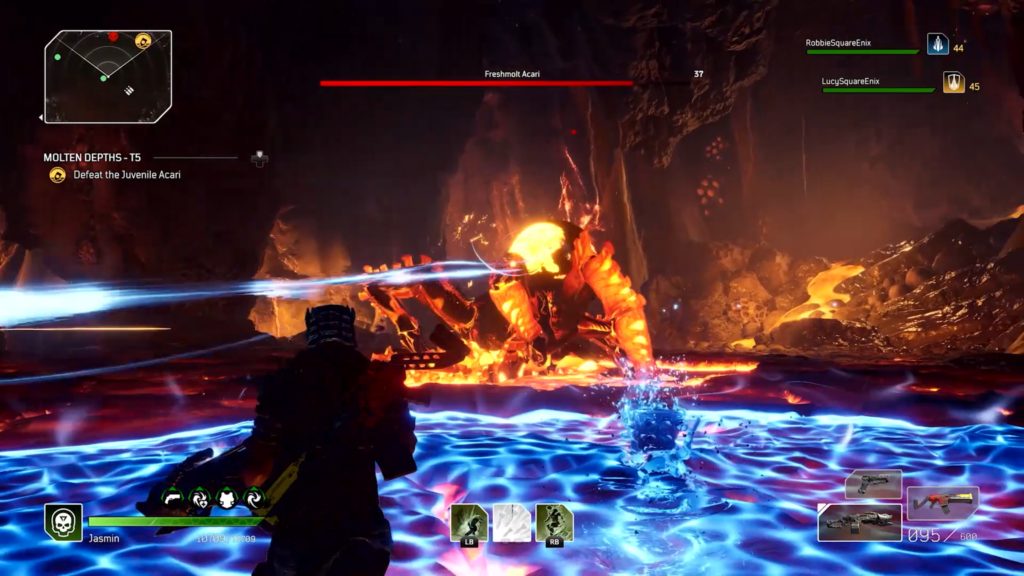 City of Nomads was probably the most fun of the four from what we’ve seen so far. Set in a huge ancient ruin, you’ll fend off hordes of alien nasties and battle against looters trying to take what’s yours. In The Wellspring you’ll need to explore a ruined village occupied by the enemy, all to get your hands on the shower of glorious loot at the end. Molten Depths has you delve into the heart of mountain, and Marshal’s Complex tasks you with liberating a strategic facility from the enemy.

A combination of horde mode and boss rush, the Outriders: New Horizon Expeditions revel in throwing heaps of enemies, elites and minibosses at you, and the new four are no exception. We failed multiple attempts at each before we finally succeeded – but this is endgame content. Difficulty is kind of a prerequisite. Outriders has seen significant tweaks to balancing and performance in the last half a year, and it shows in the update. Even being able to use legendary gear and weapons, we had to tweak the world tier a few times in our favour. 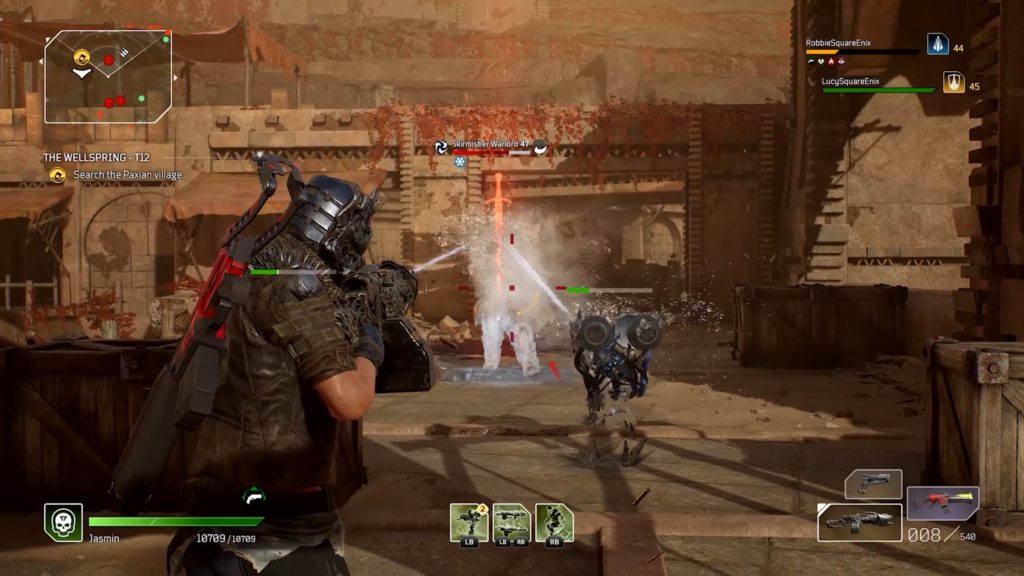 Each new area does a great job of capturing the cathartic fun of Outriders, but it would be more impactful if it included a raise to the level cap, or even the gear score. As it is, players already at max won’t have anything new to chase – although the new content is a welcome addition after 6 months. For many, the new transmog system will be one of the biggest draws.

Called “meshes”, this allows you to use any piece of earned gear as a skin. This includes legendary items, as well as weapons. During the preview event we dossed around with a lot of different pieces (handily there’s an option to equip full sets in one go), but it wasn’t entirely clear if there would be a currency involved like in Destiny 2. It would appear not though, which means we’ll all be out there looking incredible while blasting holes in the planet.

Despite having its share of ups and downs since launch, Outriders is a game that proved popular with the public. If nothing else, this upcoming update shows that People Can Fly and Square Enix are committed to supporting it going forward. Hopefully Outriders: New Horizon really is the beginning of an exciting new era for Outriders that will carry it into next year and beyond.

Senior Content Editor Mick has been playing games for over 30 years and writing about them for around 12. After drifting from site to site for a while, settling briefly at the now-defunct Made2Game and freelancing for the gone-but-not-forgotten NintendoGamer Magazine, he came at last to rest at Godisageek. Mick has been a reviewer, staff writer and content editor here for some time, while also moonlighting a little for Red Bull Games. He has 4 kids, has written 2 novels, and sometimes even manages to pay a bill or two. You'll usually find him defending the galaxy in Destiny 2, battling evil in Diablo 3, or lurking in the background on Twitter. Find him there @Jedi_Beats_Tank, or on XBL (JediWaster247), PSN (Jedi_Waster) or Nintendo (JediWaster).
MORE LIKE THIS
Outriderspeople can flysquare enix