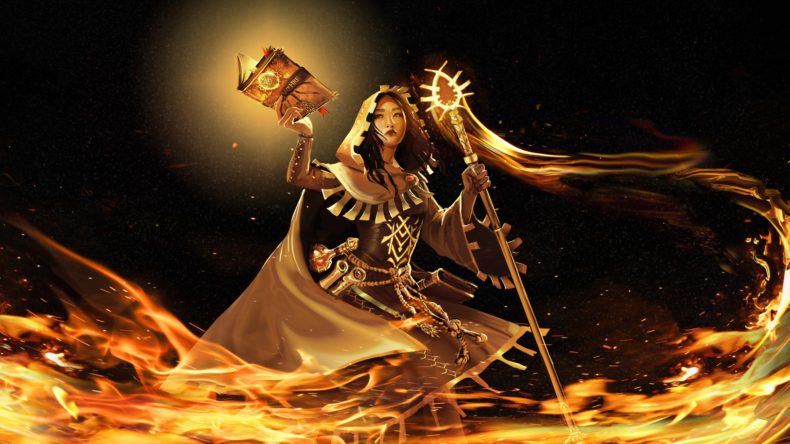 Reading about Trials of Fire before playing it left me unconvinced I’d enjoy it. While high fantasy and swords & sorcery are way up on the list of things that bring me joy, certain other elements occupy the opposite end. Card Collecting, for example, fills me with about as much excitement as picking the fluff off a bobbled jumper, and 2020 pretty much rogueliked me half to death – and yet within just a few minutes Trials of Fire had not only got my attention, but my respect, too.

Trials of Fire’s dying, post-Cataclysm fantasy world may not be anything particularly original, but as a backdrop for exploration, combat and some pretty interesting flavour text it more than seves its purpose. The art style is immediately striking, presenting the burned-out world of Ashe (get it?) as an actual storybook, allowing you to turn pages to reach your inventory and character screens, and scrawling encounter text and choices on the page like an unfolding tale. There’s a lot of brown and deep red in the world art, sure, but your avatars are boldly drawn and the action pops with colour and character.

Initially you’ll begin with a party of three characters, though choices you make and actions you take will eventually allow you to recruit 6 more. You’re tasked to explore the collapsed world, visiting points of interest such as towns and villages, cities and ruins. In most cases, there’s something interesting to find in each one. Sometimes it’ll be an item or piece of gear, sometimes a choice to make, or quite often a fight. Every leg of the journey tires your characters out, and you’ll need to rest regularly, which means maintaining a supply of food. This constant loop of forgig on and snatching what rest you can always feels compelling, even though it’s often the fatigue that eventually kills you. 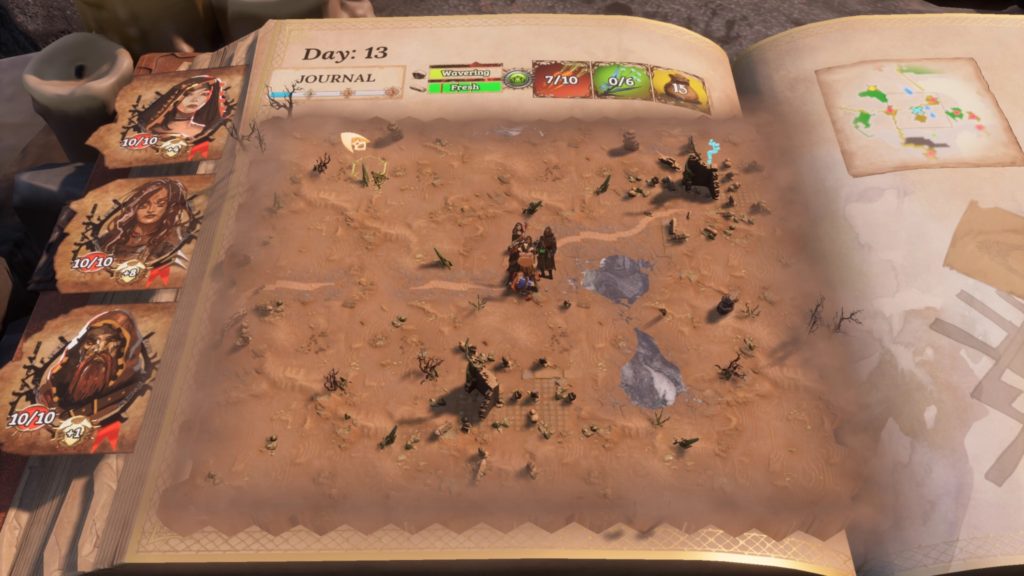 Fights take the form of turn-based card battles on a hex-grid board. Every action requires a card, from simple movement to attacks and spells, and there’s a huge variety of options that gets larger and larger as you explore and equip gear. Battles are tough, requiring a great deal of forethought and more than a little luck, particularly when up against a boss. Executing actions requires Willpower, which is finite and can only be replenished by sacrificing cards in your hand. Sometimes this can mean throwing away a powerful spell or ability just so you have the Willpower to get a character out of harm’s way or position them for a full attack next turn. However, fatigue, injury, and exhaustion will fill your deck with cards that do nothing but waste your time and reduce your efficiency, and almost every Game Over screen I saw was due to my characters simply being too knackered to hold their own.

Battles are dynamic, colourful affairs though. Actions and spells zing and pop across the screen, sound effects thwack and tinkle and crackle as you sling spells and arrows or swing swords and aces. Defeated characters explode in showers of debris and the screen shakes as playing pieces clatter in the wake of powerful attacks. These elements matter, elevating something often very simple in some CCG games to something exciting and compelling in Trials of Fire.

The cards themselves offer a multitude of tactical options, as well as attacks that synergise with one another and grant your characters buffs. New abilities and spells often come from collecting new gear and equipping items, while you can gain new character-specific cards from levelling up in the traditional way. A great deal of thought has gone into Trials of Fire’s combat and it shows. 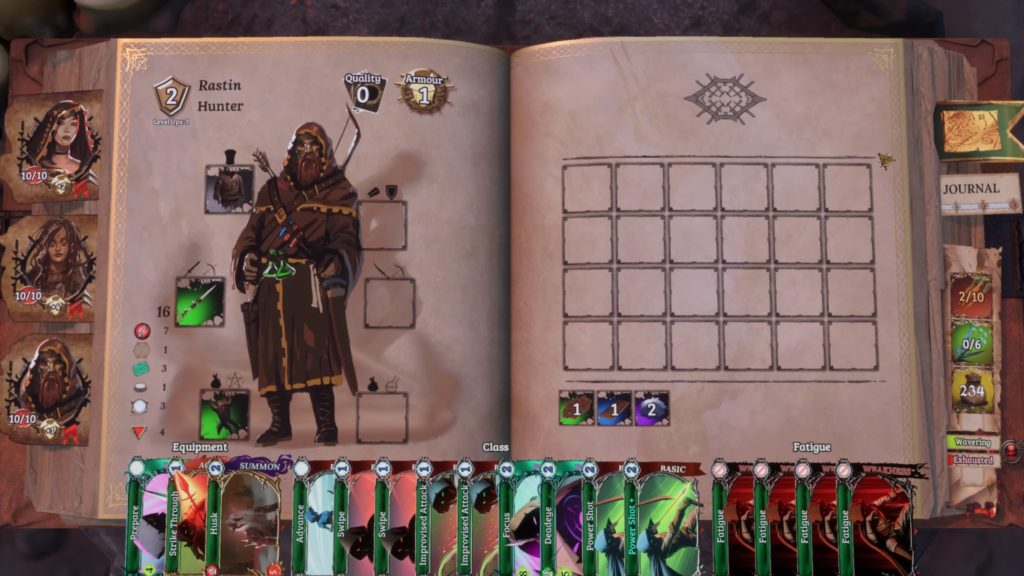 But at the same time, the roguelike element makes it an often frustrating experience. Story encounters and exploration usually lead to skill checks which you can’t see, and a bad one can end your adventure there and then if you land in a fight you can’t win or a character is permanently injured. You need to rest to recuperate and upgrade your cards, and if you have the right resources you can meditate to improve your effectiveness, but failure comes swiftly and often.

Of course, this being a roguelike, a failed run isn’t necessarily a waste. You’ll retain characters you’ve unlocked and some of the cards you’ve found, and you’ll learn with each permanent death, improving your own understanding of the game and its intricacies. It’s a shame the actual story isn’t a little more memorable. Even after half a dozen runs I struggled to invest in the plot or the plight of the characters, didn’t really care much about the world or why I was being compelled to travel across it. It’s all a case of “go here and do this” – it’s just fortunate that the going there and doing that in Trials of Fire is so much fun.

Trials of Fire is a masterful combination of several genres that manages to establish its own identity early on and build on it throughout.