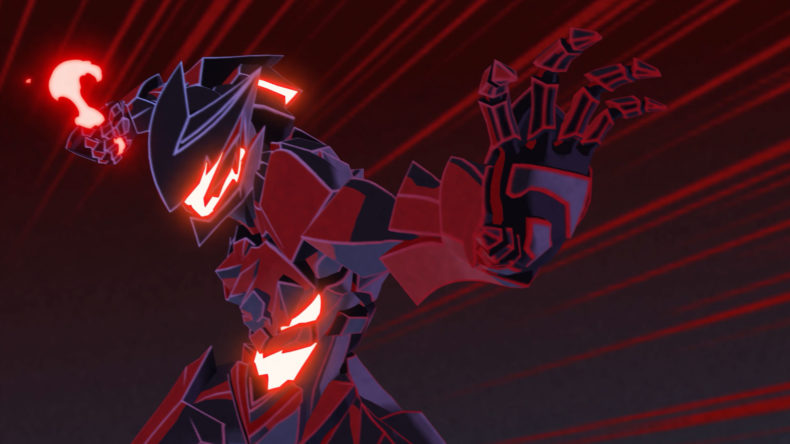 Aeon Must Die is a violent, side-scrolling beat-em-up that centres on a galactic empire in turmoil. Former emperor Aeon has been vanquished and left for dead, and has symbiotically bonded with one of his Starspawn peons to exact his revenge on the usurpers. I’ve played several hours of a preview build, and so far, Aeon Must Die is shaping up to be a very interesting action game.

Using comic book-style framing, the story is told between bouts of aggressive combat as Aeon and his host move from fight to fight. Combat in Aeon Must Die is always one on one. It’s described as a tradition in its bizarre sci-fi civilisation and, frankly, it’s nice that the devs have given it some context. Even if you’re up against a crowd, you’ll be attacked by one enemy at a time. 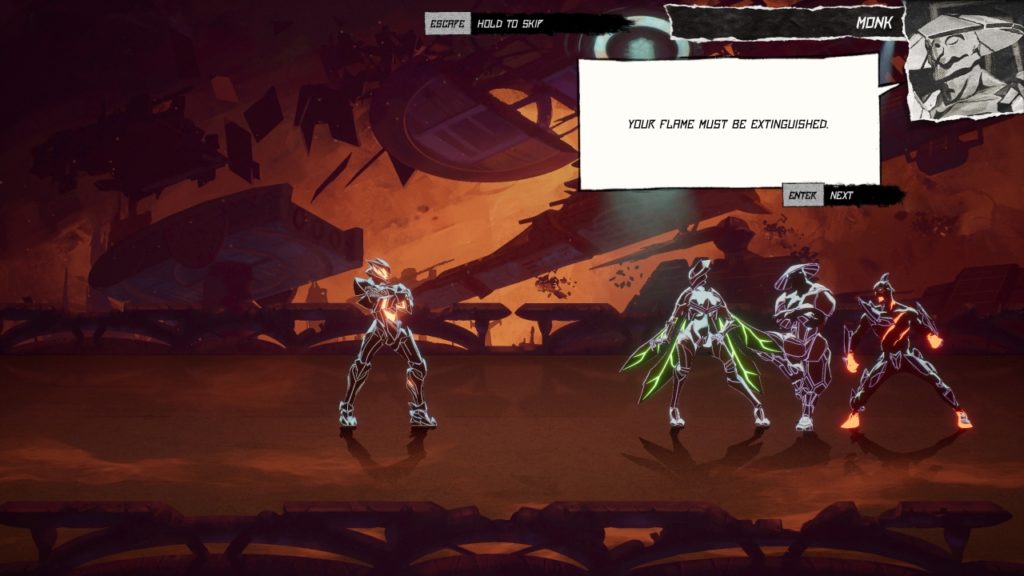 Aeon is an angry little symbiote, and he’s always on the cusp of all-consuming rage. It’s this legendary temper that determines the pace of combat. Strike the enemy and you will heat up; take hits and your heat will drain, leaving you cold. You must learn to balance this rage, as reaching the extreme of either side will leave you vulnerable to even a single hit.

You’ll need to parry enemy attacks, pick them up and throw them, and most importantly use your Burst moves to deplete some of your built-up heat. At first, combat felt a little clunky and slow-paced. Each strike has weight and purpose, and the sense of impact is heightened by Aeon screaming rage-filled put-downs at both you and your enemies.

It takes a certain type of character to be likeable despite being so hateful, and Aeon manages it. His constant barrage of insults, and general air of arrogance and contempt made me chuckle once or twice, especially as he seems to thrive when your put-upon avatar attempts to argue back. 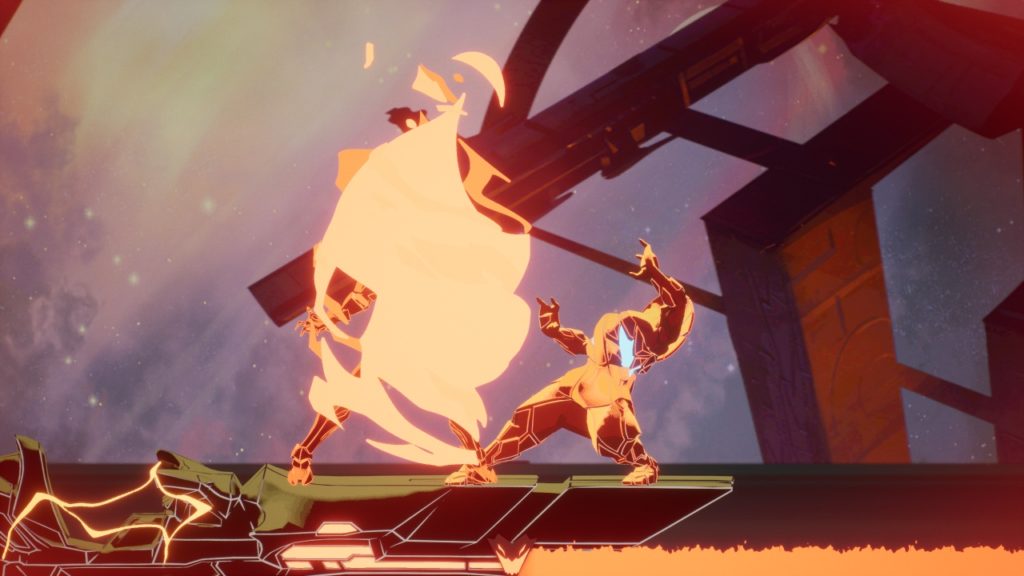 There’s a lot going on in Aeon Must Die. Not only will you need to banish colour-coded enemies (red grow your rage, blue drain you, and green push you closer to whichever is your nearest extreme), you’ll need to contend with a system where your enemies are constantly levelling up as you do.

Purpose is what keeps you going. You build Purpose by winning fights, and you lose it when you’re defeated. If you lose all of it, you won’t be able to respawn, and will instead need to return to a predetermined event in the past. This essentially means going back to the start of an entire chapter or further. Vanquishing foes earns you Aeon’s Respect, which can be used to buy new abilities.

Interestingly, your enemies have three stats that level up alongside you. Retribution, for example, determines how quickly enemies will learn your patterns. If you don’t vary your attacks, they will soon learn to parry and counter your blows. Camaraderie allows them to aid their allies from the sidelines, harrying and distracting you (although you can pick up your foes and chuck them into the crowd if you want to), while Technique grants your opponents more moves and abilities. 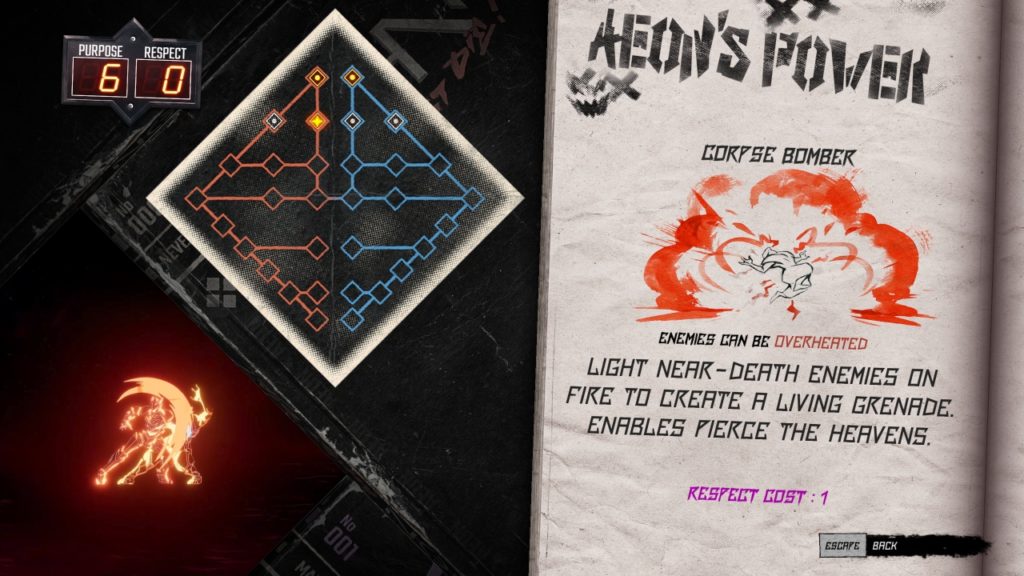 In between combat you’ll travel on your huge bike, Leech, to new areas. There are occasional cutscenes, and you can make camp to talk to Aeon, upgrade your gear, and review tutorial videos. There are even sequences where you must fight on top of Leech, which reward you with upgrade modules for the bike itself.

So far, Aeon Must Die is an interesting adventure. It’s almost relentlessly aggressive, the soundtrack is loud and in-your-face, and the violence is cathartic and brutal. Despite it feeling a little clunky, it’s fun to play and the many systems gel together well. We’ve yet to see just how formidable the enemy can become, and how that’s balanced by your own abilities and progression, but what I’ve seen so far is promising.

Senior Content Editor Mick has been playing games for over 30 years and writing about them for around 12. After drifting from site to site for a while, settling briefly at the now-defunct Made2Game and freelancing for the gone-but-not-forgotten NintendoGamer Magazine, he came at last to rest at Godisageek. Mick has been a reviewer, staff writer and content editor here for some time, while also moonlighting a little for Red Bull Games. He has 4 kids, has written 2 novels, and sometimes even manages to pay a bill or two. You'll usually find him defending the galaxy in Destiny 2, battling evil in Diablo 3, or lurking in the background on Twitter. Find him there @Jedi_Beats_Tank, or on XBL (JediWaster247), PSN (Jedi_Waster) or Nintendo (JediWaster).
MORE LIKE THIS
Focus Home Interactive