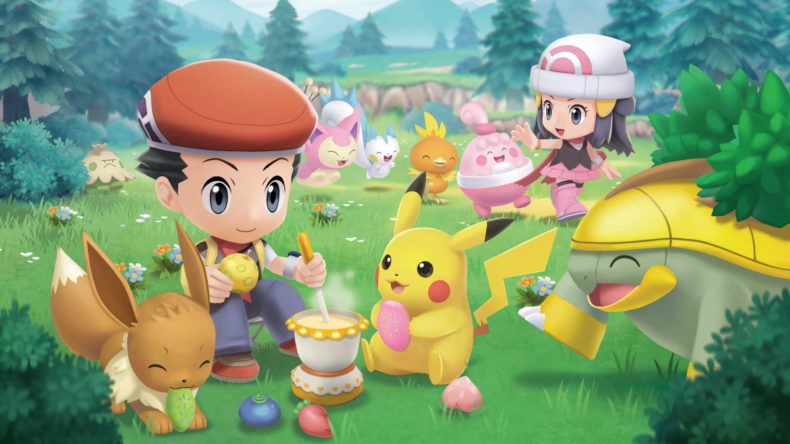 The Pokemon Company and Nintendo have revealed a load of new tidbits about the upcoming Pokemon games due in the next couple of months. That’s both the remakes Pokemon Brilliant Diamond and Pokemon Shining Pearl, as well as the brand new entry that’s due in January on Nintendo Switch, Pokemon Legends: Arceus.

Hitting consoles on January 28th, Arceus is getting another pre-order bonus in the form of a unique Hisuian Zoroark-themed Baneful Fox Mask. This is in addition ot the previously announced Hisuian Growlithe Kimono set. On top of that, there’s new forms of Zorua and Zoroark which you can check out in the trailer below.

Not to miss out on the action, the remakes of Diamond and Pearl due on November 19 have had new information regarding the boss and commanders of Team Galactic, as follows:

Cyrus and Weavile
A charismatic figure who rules over Team Galactic. Cyrus always speaks and acts with a calm, logical demeanor. He detests human minds and emotions, finding them defective.

Mars and Purugly
Mars is a strong-willed commander who hates to lose and has sworn loyalty to Cyrus. Her passion for Pokémon sometimes inspires powerful emotional outbursts. Her partner Pokémon is Purugly.

Jupiter and Skuntank
Jupiter has a mysterious air about her. She is certainly skilled at Pokémon battles, but she’s willing to do anything—even steal other people’s Pokémon—to achieve her goals. Her partner Pokémon is Skuntank.

Saturn and Toxicroak
Saturn is a cool and collected commander. Despite being one of the few who occasionally harbor doubts about Cyrus’s plans, Saturn is cold and dispassionate enough to carry out his orders faithfully. His partner Pokémon is Toxicroak.

The above trailer also reveals gym leaders, legendary Pokemon, and even the three lakes that represent the Sinnoh region.

It’s going to be a very Pokemon-y few months, it seems. If you can’t wait, you should check out the last game released, which our very own critic Lyle gave a massive 10/10 score to: New Pokemon Snap.