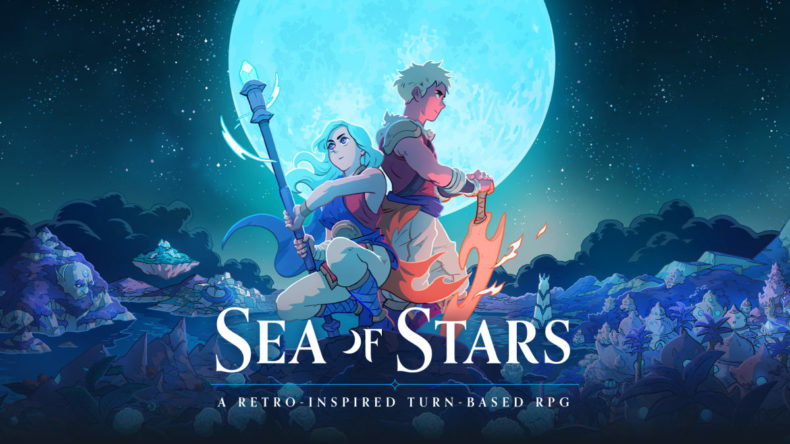 Very few events get me more excited for upcoming games more than a Nintendo Indie World showcase. Most people probably prefer the bigger Nintendo Directs packed full of huge announcements (which are admittedly fantastic) but I guess my love of lesser known titles is just too strong. To end 2021 there was an incredible Indie World event full of exciting new titles, and of those titles I was instantly desperate to play Sea of Stars. Imagine my delight when I was invited to take a look at the game last week.

After releasing beloved Metroidvania The Messenger in 2018, Sabotage Studio immediately became a developer to watch for many. When it was announced that their next game was going to be a turn based RPG, they had my attention. Taking more than a dash of inspiration from the absolute classic that is Chrono Trigger, President and Creative Director Thierry Boulanger wanted to create an experience that feels like this hugely influential game in his life. With similar combat, overworld and even approach to playtime (for those who don’t know Chrono Trigger has multiple endings that make the playtime pretty variable) fans of the Square masterpiece should be excited. 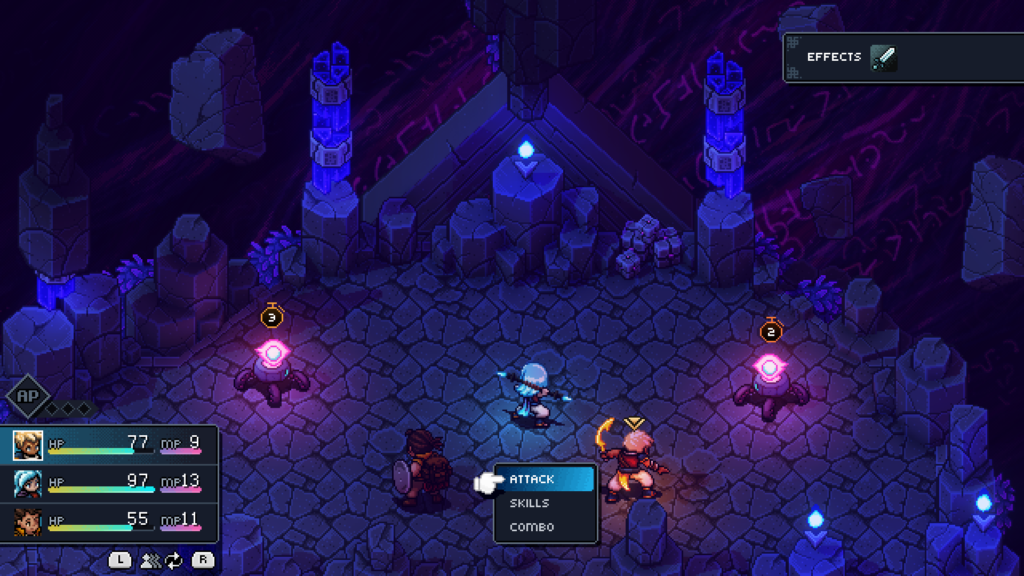 The slice of gameplay we got to watch featured our heroes on the way to an abandoned wizards lab. As Children of the Solstice the two main characters have power over the sun and moon, and are the only ones who can fight a particular type of nasty that’s endangering the land. With the help of four other misfits it sounds like they’re gearing up for a world saving adventure.

I’d want to save the world too if it looked like Sea of Stars. Sabotage Studio have outdone themselves with possibly the best pixel art I’ve personally seen. They wanted to imagine what the classic JRPGs of the SNES would look like in 2022, adding modern flourishes such as dynamic lighting. To demonstrate this the two main characters can change the time of day, and watching the shadows move and lighting change as the sun set was just magical.

After buying some new equipment the party wandered to the overworld, which was a blast from the past. With no enemies roaming or random, the overworld is just a beautiful map that gets you from A to B. When passing a beach area that was off limits for the preview, we were told it was one of the areas that guest composer Yasunori Mitsuda (best known for his work in Chrono Trigger and the Xeno games) contributed the music for. What I got to hear from the soundtrack was particularly impressive, and I especially appreciated each area having different variations of background music based on the time of day. It was a really nice touch. 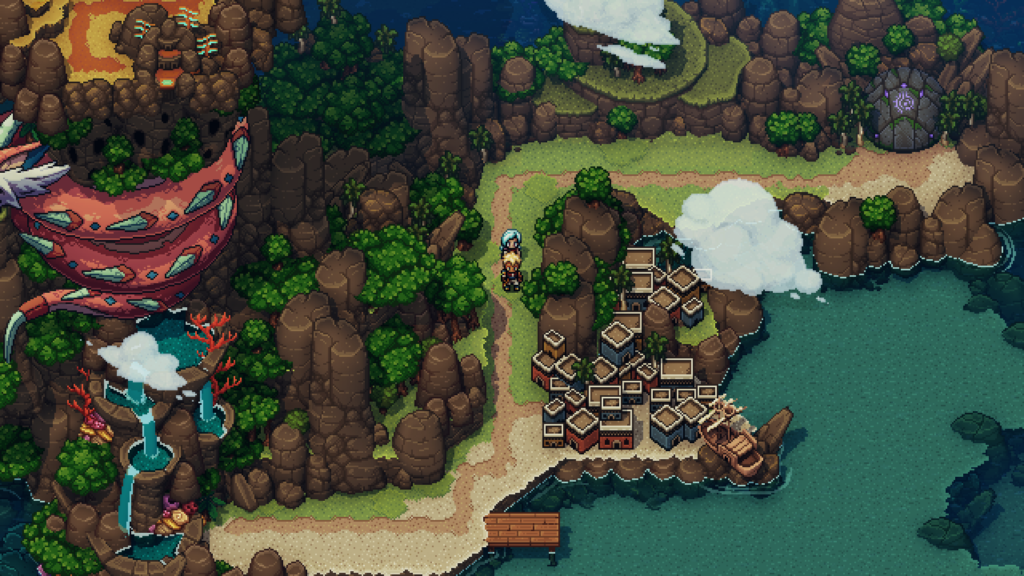 Arriving at the abandoned lab meant getting stuck into the combat. Battles take place as you wander the world, with no glass smashing loads taking you into encounters. As you might expect characters take turns using attacks and abilities until the enemies are dead, but there are plenty of interesting systems in play to keep things fresh. If you time button presses to attacks and blocks they’ll be more effective (which I always love to see), and there’s a real emphasis on taking advantage of the location of enemies to use area attacks to the fullest. I can’t wait to get stuck into it myself.

Maybe the most interesting aspect of combat though was the enemy spellcasting system. When a baddie is about to unleash a powerful attack, they’ll have symbols appear above them called Spell Locks. By using attacks on them corresponding to the symbols, you’ll break the lock and cancel the attack entirely. This means making sure you have the right elements for the job, which thanks to character switching incurring no penalties shouldn’t be too hard. To survive tougher battles taking advantage of all these systems looks to be essential.

It’s the small details that really make Sea of Stars look like it’ll be a truly special game. Things like the verticality of the environments you’ll be exploring, or how when you camp to heal up you get to chat with your party. The most exciting of all these little touches though is the fishing. Never in all my time playing video games have I seen such an active and exciting fishing minigame. After launching your bobber into the air you get to control where it flies, and need to time when to drop it onto an unsuspecting fish. 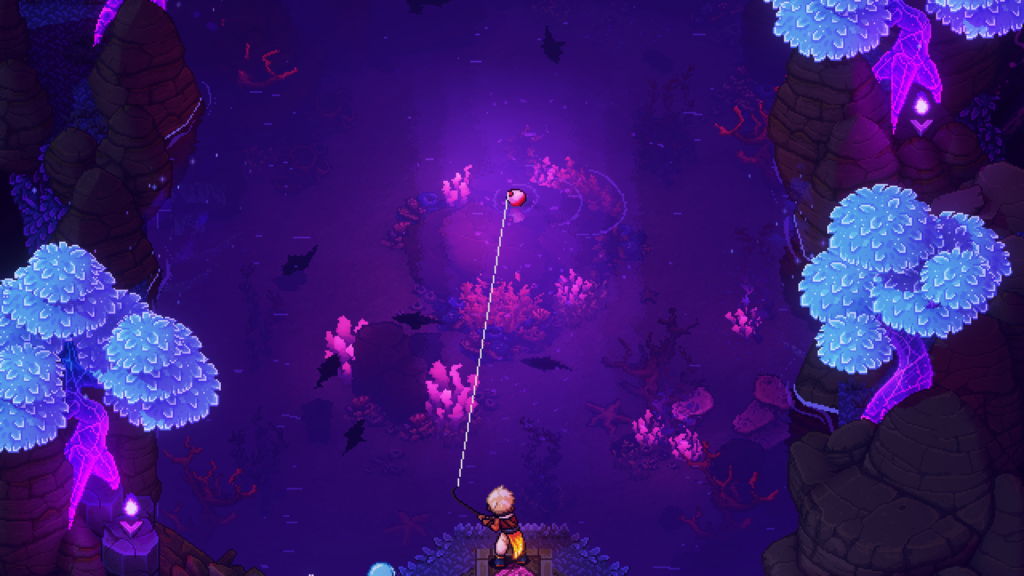 It’s worth mentioning that Sea of Stars actually takes place in the same universe as The Messenger. Sabotage Studios want all of their games to exist in one overlapping world, kind of like the Steamworld or Oddworld games. You won’t need to have played The Messenger to enjoy the game, but if you have there will be a few references and characters you might recognise. It’s a cool idea to reward fans of the studio.

Sea of Stars is a game that any and all classic RPG fans will need to play at the end of the year. The combat has more than enough systems to keep it interesting, and it might be one of the prettiest games I’ve ever seen in action. At the time of writing this I can’t think of a single game I’m more excited for this year, and in 2022 that’s a hell of a statement.

Sea of Stars is coming to PS4, Xbox One, PC, and Switch later this year.