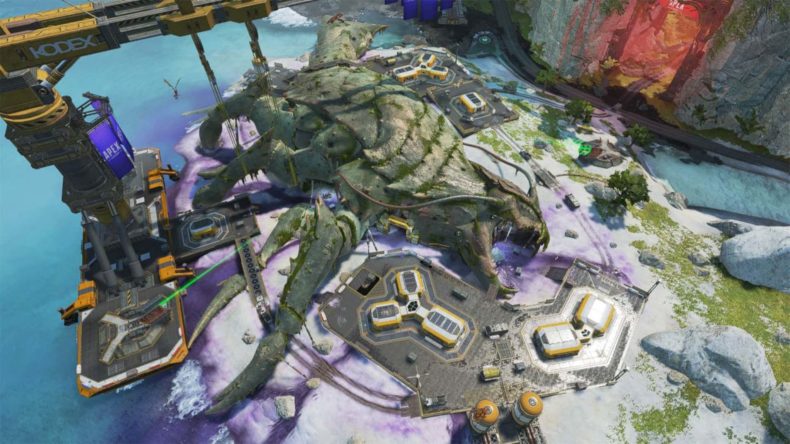 As we ramp up to the May 10th release of Apex Legends: Saviours, EA and Respawn is teasing more of the changes with a gameplay trailer that shows of the updates to Storm Point, and a few snippets of new hero Newcastle wielding his shield.

According to the trailer: “See how new Legend Newcastle wields his shield, the monstrous changes to Storm Point and the reworked Ranked system, all coming in Apex Legends: Saviors!”

One of the biggest changes appears to be, well, a massive monster as a new point of interest that you can enter and get loot from. Lore wise, it seems the monster was defeated by the Legends, with new hero Newcastle leading the charge.

There’s a lot happening in a short trailer, but it appears Newcastle can deploy some kind of energy shield, potentially onto downed friendlies, so he can withdraw and get them back into the fight. Just after we see this in action, there appears to be a way the shield can be used similar to the Halo Infinite repel skill, pushing enemies away to give you some space to plan the attack.

After that, there’s a narrator explaining IMC Armouries, which will give people rewards for investigating them. There will be a new battle pass, ranked reloaded, thought the focus seems to be on Newcastle and the Storm Point update.

Respawn also released a new “Stories from the Outlands” video, which brings some history to the new hero Newcastle’s story. The teaser line for the videi simply says “Who is the man beneath the shining armour?” and, well, we already know from the previous trailer that he’s Bangalore’s brother.

Regardless, there seems a lot coming to Apex on May 10th, so stay tuned for more information as and when we have it.

Apex Legends is free to play and out now for PC and consoles, including Nintendo Switch.