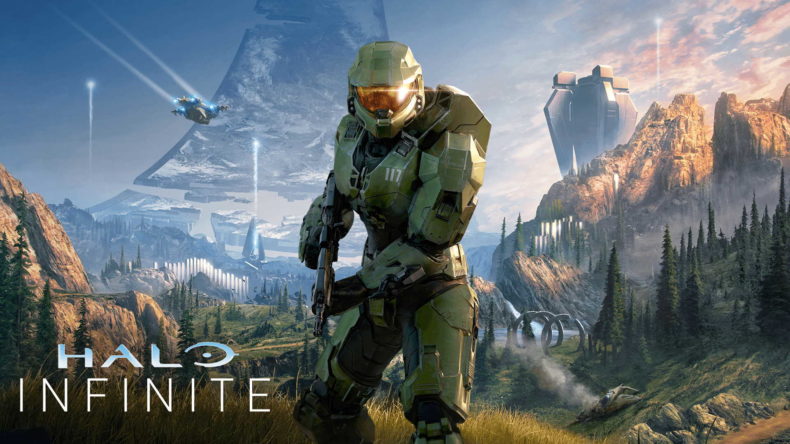 There’s no question in my mind that Halo Infinite is the biggest and best adventure in the series to date. That may be sacrilege, or merely a bold statement, but 343 has shown a masterful understanding of what made Halo feel so good in the first place, while putting its own stamp on the series in a way that, in truth, I am left wondering how long-term fans will feel about it.

It may go without saying, but I’ll say it anyway: I’ll be steering clear of spoilers for Halo Infinite’s story. All I will say is that it makes good on most things I had hoped for going in, and leaves the series open for future developments. This Halo experience is set around 18 months after the events of Halo 5: Guardians, and to be completely clear: this is a Master Chief adventure. The Banished are very much in charge, and a newly revitalised Chief needs to put an end to all of that.

It all takes place on Zeta Halo, and whether or not 343 Industries wants to admit it, this is an open world adventure akin to the likes of Far Cry or Assassin’s Creed, only on a much smaller scale. Crucially, it’s also an open world where the keystone of the entire experience is based around gameplay being fun over everything else. It’s very clear from the off, starting with a grappleshot, that you are the star of everything Halo Infinite offers up. Without that core fun, it really would fall apart. 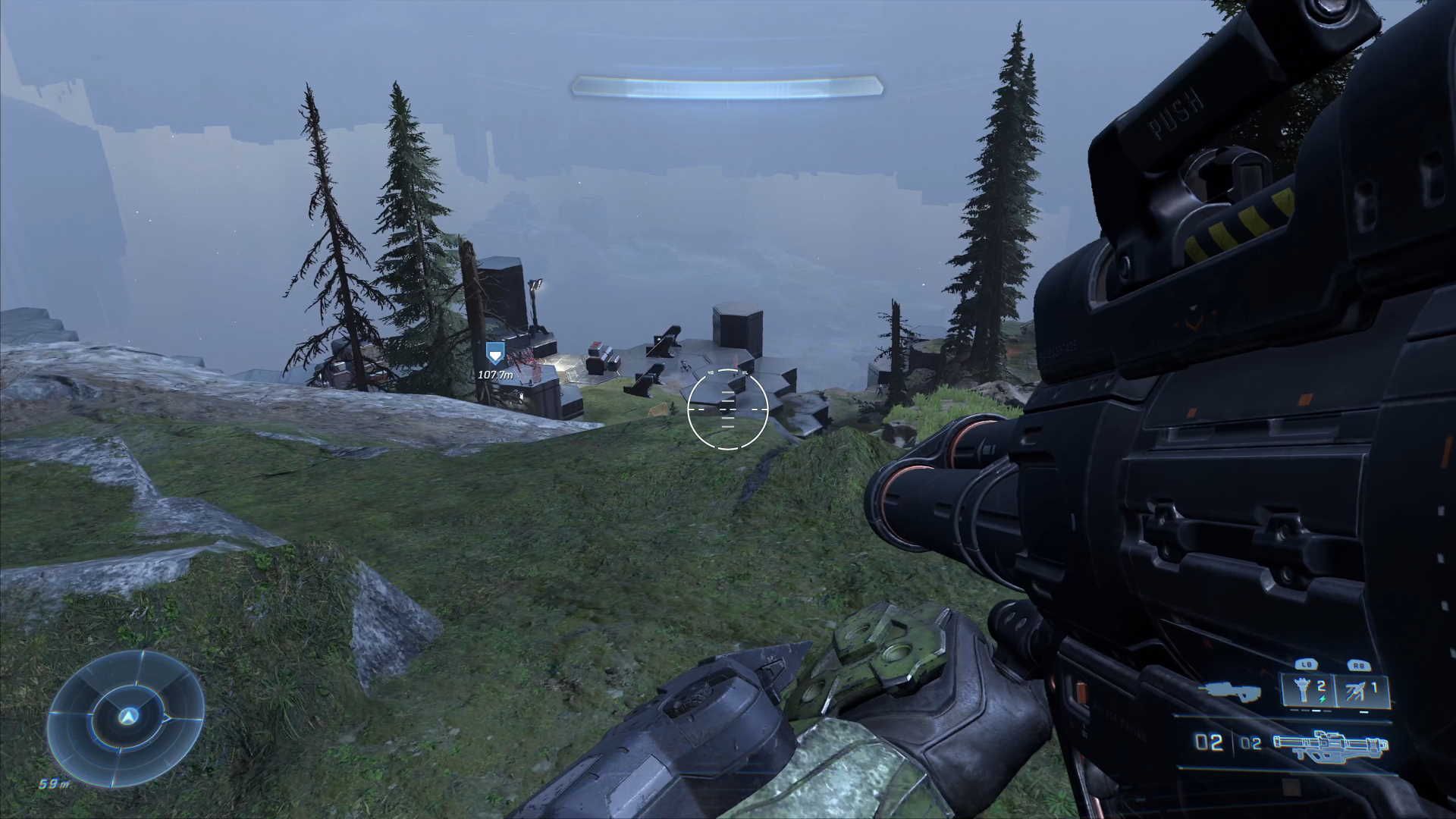 And what fun it is. When I saw the credits roll I had done over half of the available activities and had clocked around 12-13 hours, with plans to go back and mop up the rest of the map. There’s nothing revolutionary about Zeta Halo, really: you take back FOBs (forward operating bases) which are akin to fast travel spots on the map, and when you do so, you’ll open up other missions and points of interest nearby. At a FOB you can stock up on ammo, call in human reinforcements, and grab vehicles, it’s a nice touch that lets you change up your attack if you’re struggling.

There’s a decent range of side activities on offer, but again, nothing you haven’t seen before. You can hunt down and assassinate Banished targets, which will in turn give you a special variant on a weapon you can unlock at any FOB. These range from almost comically easy to brutally difficult, especially when one assassination becomes a double team event. 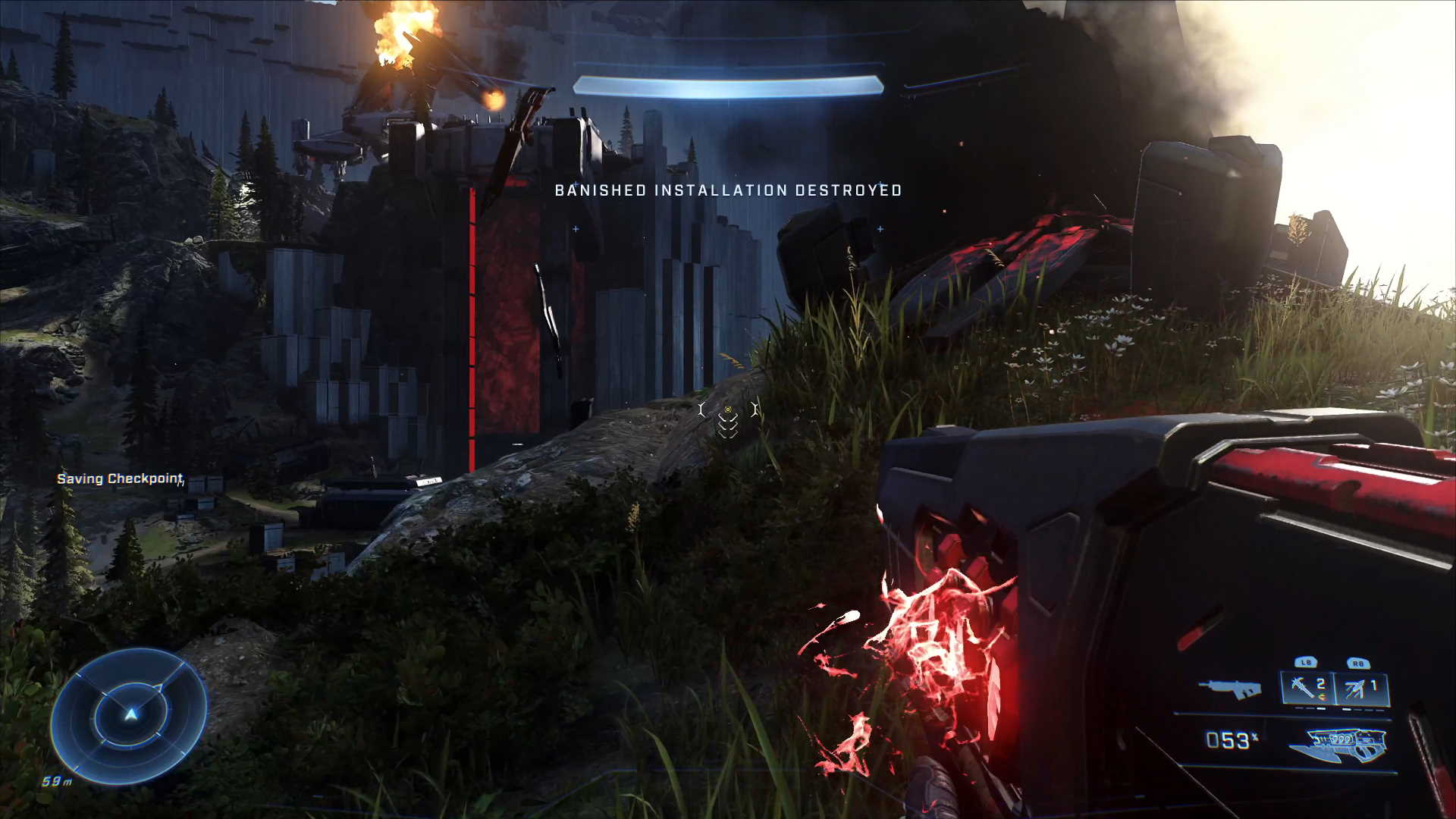 You can also free UNSC soldiers from captivity, and again, there’s a small encampment style operation, all the way up to large bases that need you to open gates and free multiple hostages at a time. There’s Mjolnir Lockers that are often hidden in caves or up mountains, and these unlock cosmetic changes for the multiplayer. More exciting, however, is the Spartan Cores you can find hidden in cache boxes around the world which allow you to upgrade the Chief’s abilities.

There are five abilities to upgrade in total, starting with the grappleshot but including your shield. Using points to upgrade them do things you’d pretty much expect. For example, a fully upgraded grappleshot lets you pull off a massive punch from distance, or electrify your foes, with a much quicker recharge time. The trouble is, despite trying a bit of everything on offer before finishing the game, I couldn’t help feeling that nothing is quite as useful or as fun as that starting grappleshot. You’ve probably seen some of the abilities in the multiplayer, and they just don’t have quite the same usefulness as the grapple. 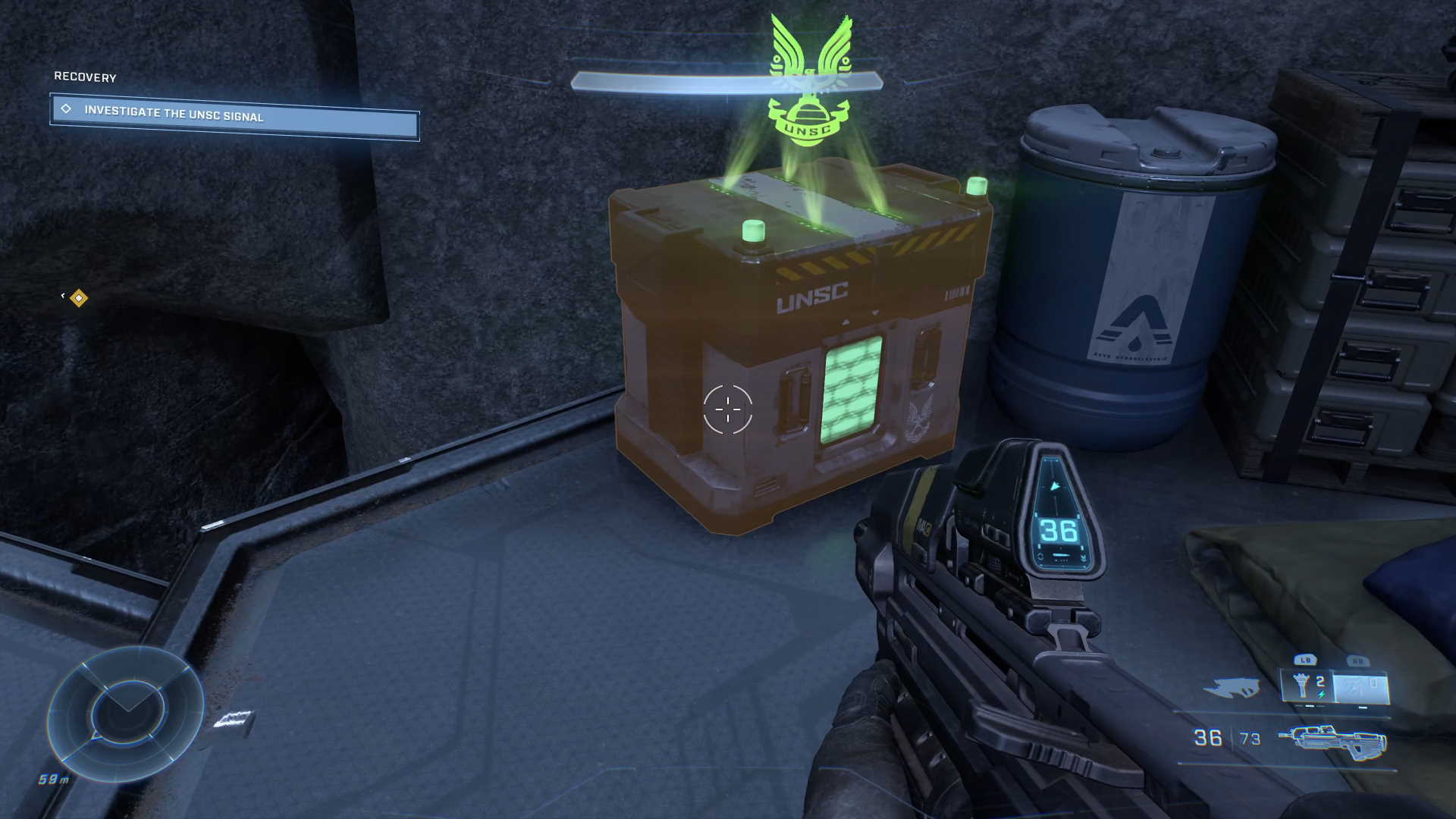 Take the drop shield, for example. Even fully upgraded the cooldown is painfully slow, and towards the end where you might actually need it, the enemy is so numerous and clever (in terms of AI) that it never felt useful to me. There’s another movement ability I don’t need to spoil here, but suffice to say I don’t really understand the point of it, given I had incredible mobility with my grappleshot. The ping grenades are very useful when upgraded, allowing you to throw two out in different directions that keep enemies lit up on the screen, even with health bars. This was the second most useful ability, but I’d always use it and quickly hit the D-Pad to switch back to the grapple so I had maximum survivability and mobility.

The combat is without doubt the star of Halo Infinite. It’s exquisite and simple, but there wasn’t a second out in the world of Zeta Halo I can remember not being enjoyable. There’s a couple of boss fights that spike the difficulty in a way I wasn’t expecting, but the payoff in terms of story, musical direction, and voice work means that every struggle is worth the fight. 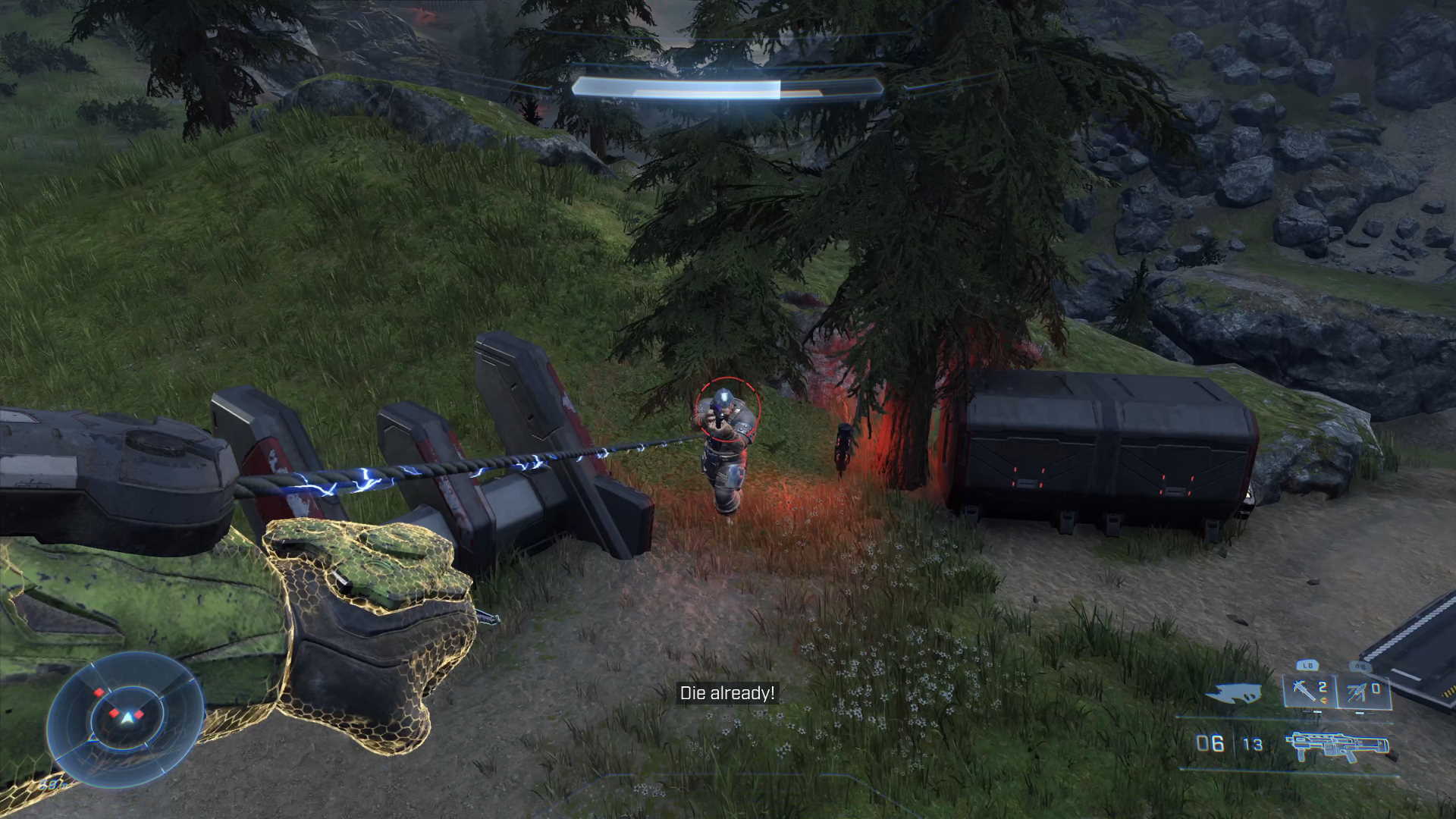 It’s just so moreish and honest. Spiking your grapple at a Jackal to remove its shield, then hitting it with a follow up grapple and slapping it across the face for the kill, it never gets old. I must have saved so many bullets because I couldn’t get enough of flying around the map smashing grunts in the face. Even camouflaged Elites are no match for that grappleshot, electrifying them in place and giving them five of the best in the face. It’s exciting, and I couldn’t put it down.

Is it an Xbox powerhouse?

There’s emergent moments of humour in the combat, too. Getting over-excited and grappling into a Grunt who is charging with two sticky grenades in the air really does make you laugh as you explode. You did it, nobody else. It’s a tricky thing to get used to at first, but once you master the way the grappleshot works, it’s almost like you can fly.

It wouldn’t be a Halo game without a few repeated locations, and that’s one area that Halo Infinite does suffer a little. While it’s a good looking game, overall, there is a definite feeling that you’ve seen some of these locations before, and while the load times are decent, there’s room for improvement. Truthfully, you can only make so many greyish-blue corridors before it feels like you’ve seen it before, I guess, but the switch to open world gives you a break from the story if you want to go exploring, anyway. That said, this isn’t a powerhouse in the way Forza Horizon 5 is for the Xbox Series X, but it looks good enough, and I’ll take fun over visual grunt any day of the week.

343 Industries has nailed it. There’s no question this is a brilliant experience that I couldn’t put down once I’d started. It’s not perfect, and the abilities outside of the grappleshot definitely don’t live up to the fun of bouncing around the map. But really, all that matters is the story and gameplay, and both are utterly excellent.

Halo Infinite is a great example of gameplay being king. Moreish, exciting combat is only let down by a fairly safe open world and lack of essential feeling abilities and upgrades.