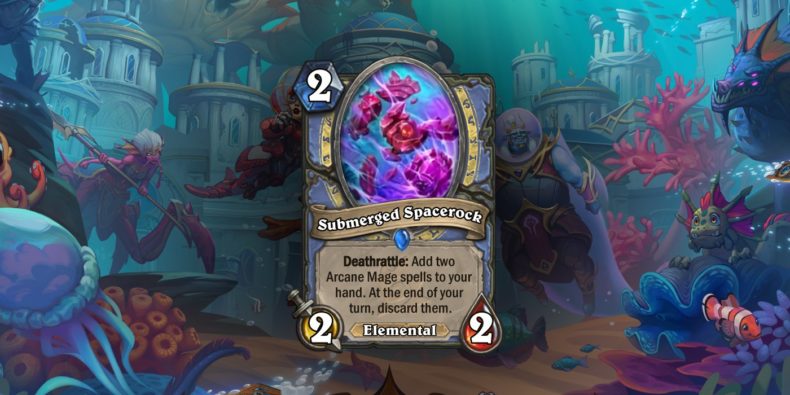 Fellow card game fans have a busy day of deck building coming tomorrow, because the Hearthstone Throne of the Tides Mini Set is releasing then. With 35 powerful new cards coming to everyone who purchases Throne of the Tides Mini Set (with gold or real world money), there’s a very good chance that it’ll shake up the meta. There’s no need to worry about your pack opening luck if you grab the set either, because buying Throne of the Tides gives you two copies of every standard card and one copy of any legendaries. Hopefully all these new cards will tide you over until the next full expansion later this year.

“Tumultuous tides turn as powerful forces fight for supremacy under the sea. Now you can harness their power in the all-new Throne of the Tides Mini-Set!

The Throne of the Tides Mini-Set, launching worldwide on June 1, consists of 35 different cards: 4 Legendary cards, 1 Epic card, 14 Rare cards, and 16 Common cards. Those new cards can be found in Voyage to the Sunken City packs, or you can get the entire 66-card Mini-Set for $14.99 or 2000 Gold! The Mini-Set will also be available in an all-Golden version for $69.99!

Turn the tides on your opponents with this infusion of 35 new cards! The fight for the Throne of the Tides requires strength and subterfuge. This Mini-Set includes huge new Colossal minions, more Sunken City synergies, powerful disruption tools, and one adorable Elemental! With all these new tools available to you, the throne will be yours for the taking.

News
blizzardHearthstoneThrone of the Tides