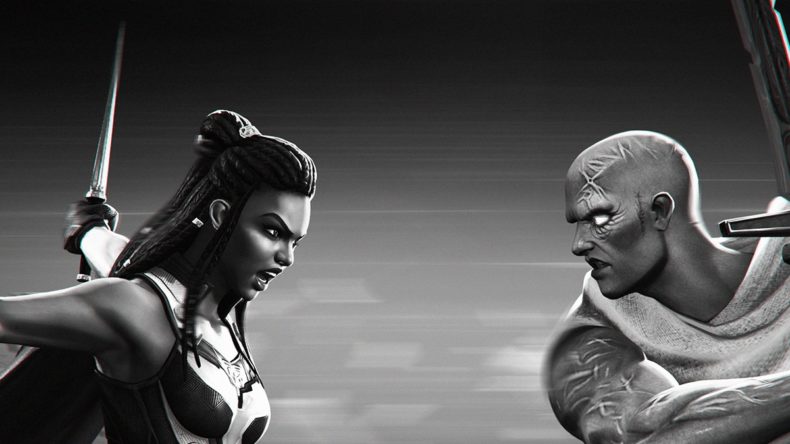 Kabam’s massively popular and award-winning mobile fighter Marvel Contest of Champions has introduced new content based on Thor: Love and Thunder. The upcoming Marvel Studios film is releasing in just over a week, but fans of the game will get to see two new champions from the movie in the form of Gorr the God-Butcher and Valkyrie. Gorr, played by Christian Bale, is the new villain of the movie, with Valkyrie already playing a role in Thor: Ragnarok.

The official synopsis for them is as follows:

Gorr the God-Butcher grew up on a harsh world, where belief in the gods kept his people from falling to despair. But after his family perished to the deadly environment, Gorr became disillusioned and swore vengeance against the gods that never came to help him or his people. He later obtained the powerful Necrosword, and gained the ability to control dark magic and shadowy constructs. He uses these powers to wreak havoc, destruction, and death on any and all that would call themselves gods.

Thor: Love and Thunder: Battle of the Gods

Former leader of the mighty Valkyrior, and recently crowned sovereign of New Asgard, Valkyrie has long been a bastion to the Asgardian people against the evils of the Nine Realms. Possessing superior strength (even among Asgardians) and armed with the powerful weapons, training, and tactics of the Valkyrior, she is an excellent leader, and a steadfast warrior. Her conviction, though scarred by loss, is stronger than ever, and she is ready and willing to protect the Asgadians of the Battlerealm.

Gorr will be arriving in-game July 14 and Valkyrie will follow two weeks later on July 28. To keep you hyped until the release, Kabam has released a brand new Champion Trailer which you can watch below. There’s also character deep dives and special moves content on the official Marvel Contest of Champions YouTube channel.

There’s even more Thor content coming next month. Between July 8 and August 2, all new and existing players be able to add Thor or Jane Foster’s Thor to their rosters when downloading Marvel Contest of Champions and logging in. These two characters will be joining a roster of over 200 champions, including other MCU-inspired characters like Korg, Odin, Hela, Loki, and the Guardians of the Galaxy’s Star-Lord, Drax, Rocket, and Groot.

Finally, from tomorrow until July 5, a special login calendar will be available for players to receive Champion Shards, and a special Summoner Sale will begin on July 1, and run until July 5.

Video games are cool. Don't let anybody tell you any different.
MORE LIKE THIS
KabamMarvel: Contest of ChampionsThor: Love and Thunder