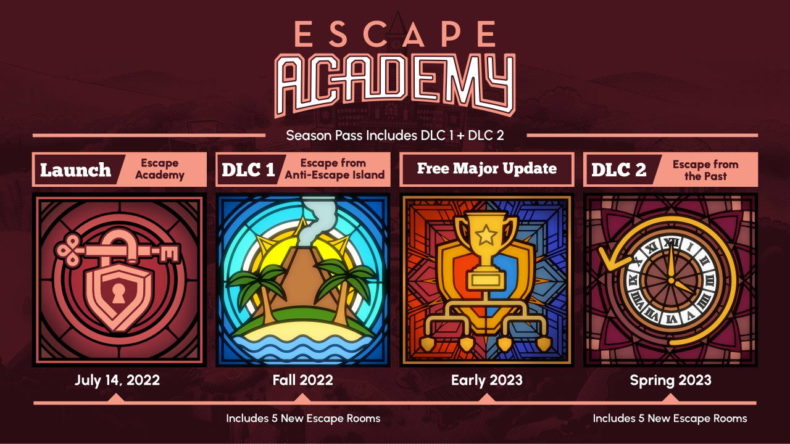 Coin Crew Games, the developers of the wonderful puzzle game Escape Academy has announced their intended plans for future DLC for the game as well as a free update. In a Tweet, the developers laid out their intentions for two additional DLCs.

What’s more, the developers have teased a free major update to the game, that is penciled in for early 2023. Nothing is known about this update as yet, but it’s great to see the developers providing free enhancements for the community.

You can see the Tweet from the Escape Academy developers below:

So…What's next for Escape Academy? 🤔

🏝️DLC 1: Escape From Anti-Escape Island is coming THIS FALL

🏆We've got a rad, FREE major update coming in early 2023 that we can't wait to show

If you’re still unsure about whether or not to try Escape Academy, you absolutely should. Here at God is a Geek, yours truly reviewed the game and scored it an impressive 8 out of 10. I had this to say:

Escape Academy is a fun, pretty unique experience that is well executed. The rooms and puzzles are varied, and the learning curve is done well. It’s oddly addictive, especially in co-op, and although it still suffers from the occasional obscure solution, for the most part, everything is well put together and enjoyable. So much so, that you’ll wish there were a few more rooms to try once it’s over. For puzzle and escape room fans, Escape Academy is definitely one to try.

Also, if you’re worried about getting stuck, then we’ve got you covered as well. Just head on over to our Escape Academy Walkthrough where you’ll find the answer to every puzzle.