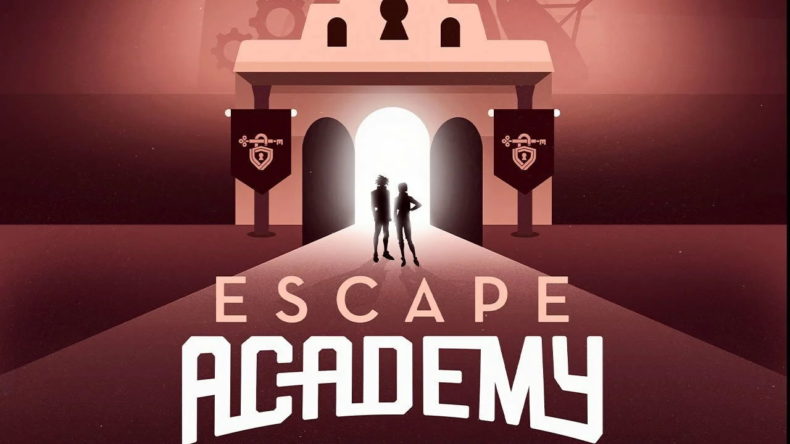 Escape rooms are a calling to puzzle nerds like me, the ultimate gauntlet to test my cerebral juices. The challenge of course doesn’t just come from solving puzzles, but also deconstructing what the puzzle could even be in the first place. It’s essentially a challenge within a challenge, like a nerdy set of Russian dolls, as you delve deeper into what the mind behind the room wants you to think. In many ways, Escape Rooms are focused point-and-click adventure games, as you spend time figuring out how seemingly disparate clues and notes come together to solve your ultimate goal of freedom. Escape Academy from Coin Crew Games is looking to scratch my escape room itch with its collection of puzzling scenarios.

You are a budding escape room patron and begin the game doing what you love. Upon exiting the room – a few basic puzzles solved – you begin to realise not everything is as it seems. Before long you uncover the Escape Academy, where budding escape room aficionados ply their trade at a boarding school of puzzling. Think Houdini and Hogwarts and you won’t be far wrong. There’s a bit of a story in the background, revolving around mysterious goings-on and a rivalry between you and stereotypical obnoxious student A, but mainly we’re here for the puzzles, and ultimately the escaping.

Escape Academy | All about campus

Each escape room is based around the Escape Academy campus. You choose your next escape room from the campus overworld map and more are unlocked as you progress. Despite its static setting, the actual locations of the escapes are all different. You could be trying to snoop around the Headmistress’ office for example, or be looking to get out of the cafeteria, or library. Each room feels unique and memorable to play. Every room has a difficulty rating, and a time you need to complete it by – often for some humorous story reason. So you know the complexity of the challenge before you start. 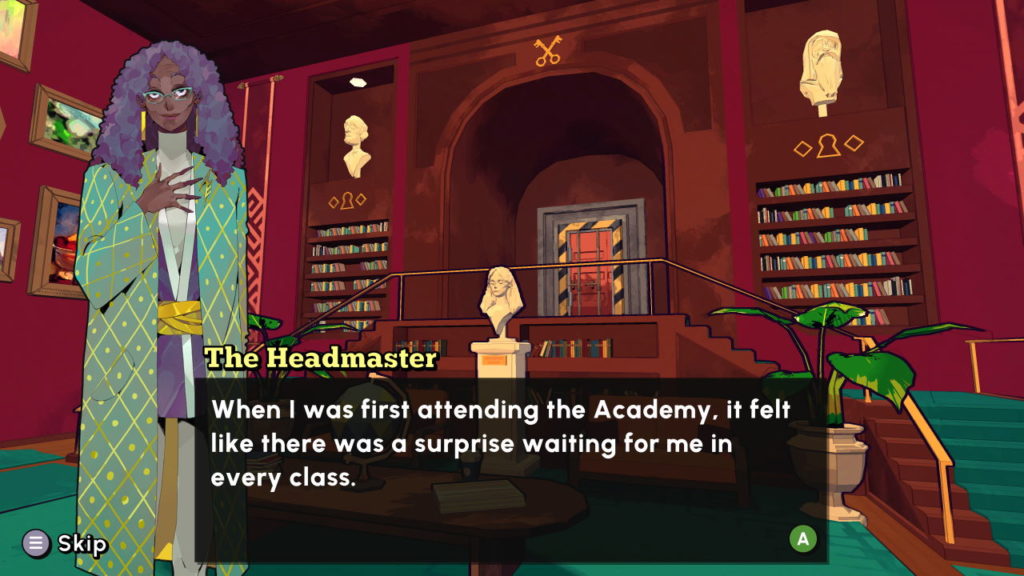 The challenges themselves then; the bread and butter of what we’re dealing with. How do they feel to play? Well, the good news is, that Escape Academy is a very accessible game. You’ll escape out of the first level, likely with minimal issue, and maybe even get an A+ ranking, and feel like a bit of a boss. But as the difficulty and timers for each level increase, there’s clearly complexity that it embraces. The thought processes for the harder puzzles do require more thinking, and whilst the timing isn’t too tight, it is a constant reminder, providing the pressure that gives escape rooms their appeal.

As you progress through the levels, sometimes the difficulty rating drops, and you’ll notice once it’s over that it felt genuinely easier. And that shows the difficulty curve here is very considered, with Escape Academy doing a good job of preparing you for its highest challenge at the end of the game. The different puzzles or even puzzles within puzzles are also incredibly varied. You’ll rarely be doing the same thing twice, which given the number of little conundrums, is very impressive. You’ll work with letters, numbers, language, coordinates, chemicals and there’s even a chainsaw. No room feels the same, and Escape Academy is all the better for it.

Most rooms are a combination of linear and non-linear riddles. Some things need to be done in order to progress, whereas others can be done in any order as long as you have all the required solutions at the end. Again this adds variety, but the non-reliance on a linear critical path means if you’re stuck on one part, maybe there’s the option to look at something else instead. I’d be lying if I said I didn’t get stumped a few times on some bottle-neck puzzles, meaning I couldn’t move forward. There were even a couple of times I knew what I had to do, I just couldn’t quite work out how to do it. 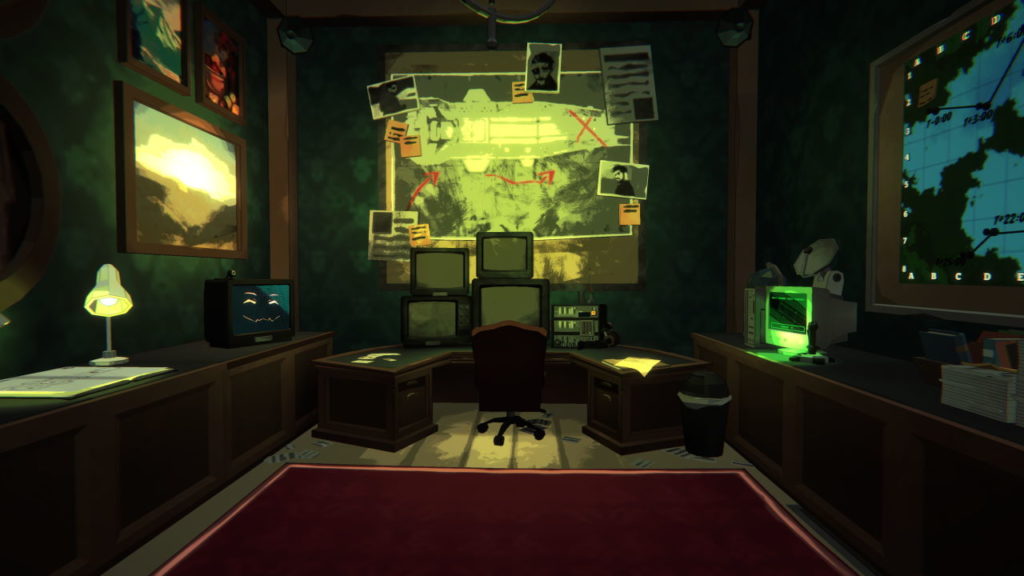 Luckily there is a hint system, which will help you to your next mini-goal. It’ll give you a summary hint, with the option for more detail if you need it. The more hints you use, the lower your overall performance ranking when you escape the room, but that’s better than not finishing at all. The hints are visual too showing you where to go and what to do, rather than cryptic text making you more confused. They’re a solid last resort for those struggling to move forward.

Escape Academy works fine as a single-player experience, being able to solve all the puzzles solo. However, like real escape rooms, the experience is improved by playing with other people, and the game offers local or online co-op play. The rooms are still the same, but now you can bounce ideas between one another, tackle different riddles simultaneously, or work together to solve a more complex conundrum more efficiently.

You’ll find yourself gravitating towards note-taking too. In fact, the game even encourages you to do so. Don’t worry this isn’t the barrier to entry that it sounds. There aren’t any obscure forgettable clues in far-flung places you’ll need to recall hours later. But it helps to have information to hand rather than backtracking to where you discovered it. Co-op play also negates some note-taking as the other player can call out the information you need for a puzzle from afar. 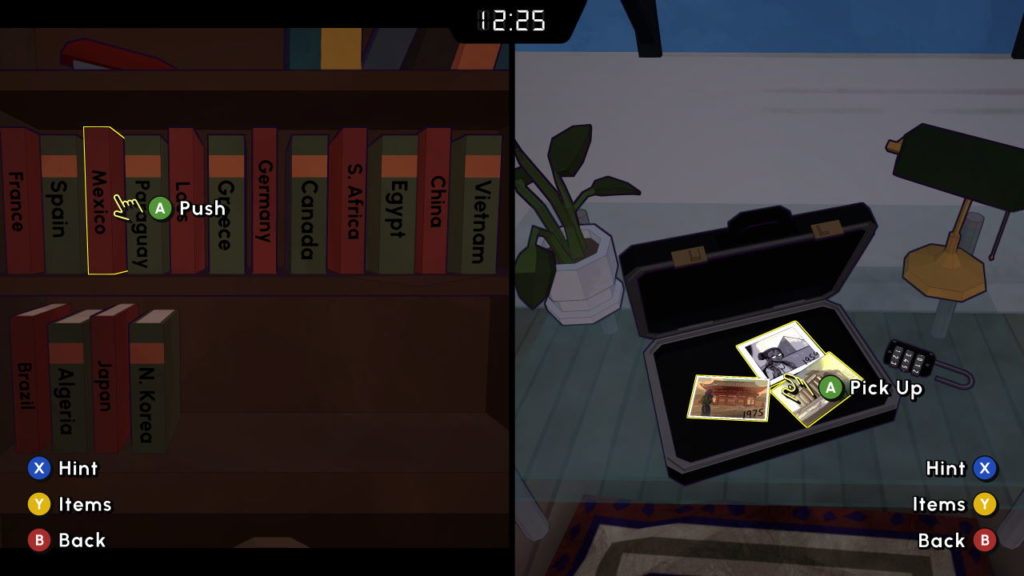 A slightly disappointing aspect of Escape Academy is its run-time. The number of escape rooms reaches double figures, but even so, you’ll likely only get 4-6 hours of play from it depending on how much co-op you play – which naturally speeds up your progress. It has that “one more room” vibe that keeps you playing, and when it’s over in such a short time, it’s a little disappointing. There’s also not a lot of replay value at the end, as the mystery and challenge of the escape rooms are gone. Although should you want to replay them, you absolutely can.

Escape Academy is a fun, pretty unique experience that is well executed. The rooms and puzzles are varied, and the learning curve is done well. It’s oddly addictive, especially in co-op, and although it still suffers from the occasional obscure solution, for the most part, everything is well put together and enjoyable. So much so, that you’ll wish there were a few more rooms to try once it’s over. For puzzle and escape room fans, Escape Academy is definitely one to try.

A little short
A couple of obscure puzzles

Escape Academy is a fun, addictive puzzler that captures the escape room magic with plenty of detail and variety, you'll just wish it lasted a little longer.