previous
A lot of effort is going in to making Dead Space an incredible remake
random
next
Stranded: Alien Dawn is a 3D RimWorld | Early Access Impressions
0 comments 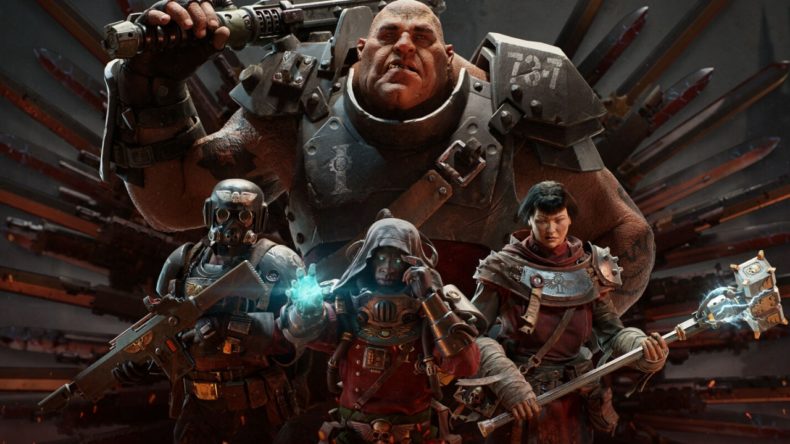 Closed betas can be a little hit and miss at times. On the one hand they’re great for showcasing what a game will eventually be, but they’re also a representation of a game still in gestation and therefore, of arguably inferior quality. Take Fatshark’s Warhammer 40K: Darktide, for example. While the closed beta undoubtedly gives a clear indication of what the game will eventually be, it’s also buggier than a week old bin-bag.

Thankfully, though, what I was able to play has more than whet my appetite. On the surface you’d be mistaken for thinking it’s just another Left 4 Dead or Vermintide clone, but peel back that top layer of rusty steel and you’ll see there’s a lot more going on. One thing Darktide has that the other titles simply don’t is personalisation. You don’t just pick a class here; your character is not only persistent, but will develop and grow like it’s an RPG. 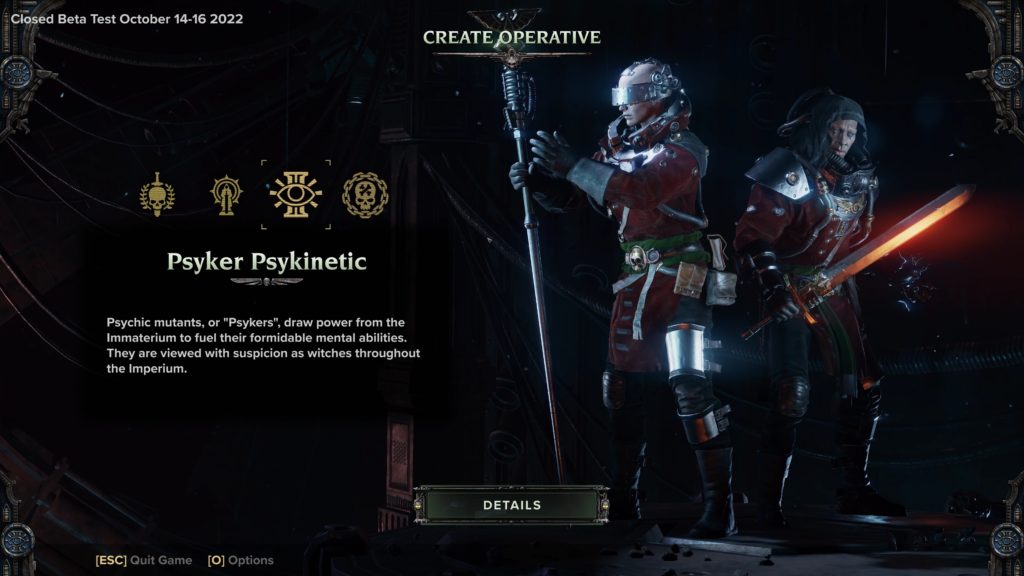 You can select from four archetypes: Veteran Sharpshooter, Psyker Psykinetic, Zealot Preacher, and Ogryn Skullbreaker, and each has different abilities, loadouts and stats. But beyond that, you also customise your character, and pick their backstory from an extensive set of parameters. This backstory determines everything from how they sound to how they interact with one another on missions, dictating their call-outs and cries for help. It’s an interesting system and one that ensures you get attached to your menace of choice.

The story, such as it is, sees you in prison for one of a handful of crimes. This being the 40k universe, you can’t just live out your sentence doing push-ups in the yard and must instead run dangerous excursions into hostile territory. You’ll level up, earn new weapons and armour, and unlock new abilities as you go, but you’ll always be an expendable prisoner either way. 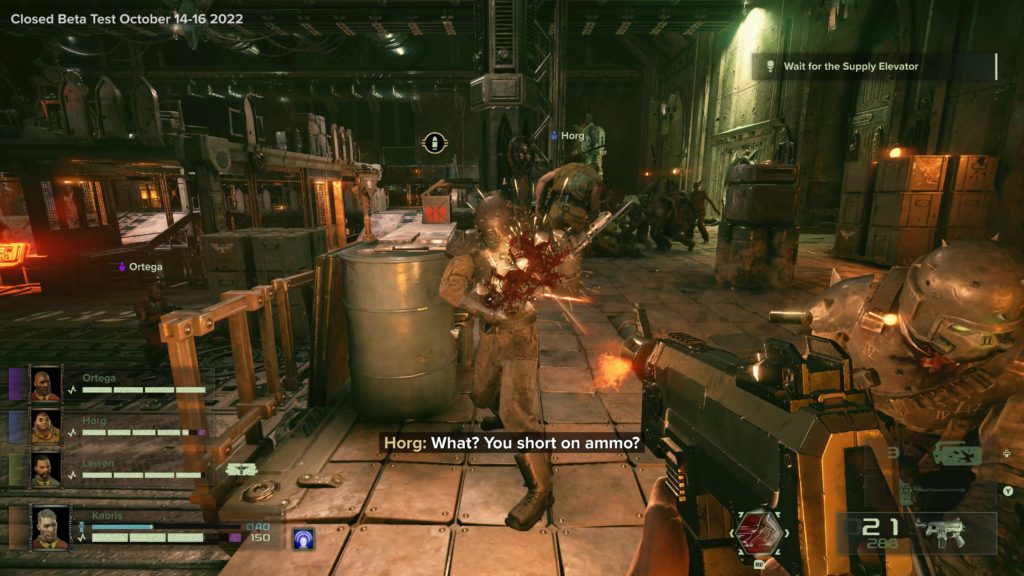 Missions are very much like Vermintide. The several I played were multi-phased and juggled objectives around in blocks. They were also super long, with loads of firefights, mini-bosses and,m of course, special enemies. From a brute that charges you and send you flying, to a hellhound that pins you down or a huge guy with an energy net, you can’t get out of trouble without an ally close by.

In fact, Darktide does more than any of its genre-mates to keep you working together. You have a health meter and a toughness meter which acts like armour. While you can restore health through various means in each stage, toughness is returned b y killing enemies and “coherence”, which means staying near to your allies. This encourages you to stay close to one another, and protect each other.

Unfortunately, the beta was far from optimised and even on low settings, I struggled to run it on a PC that comfortably runs the likes of Tiny Tina’s Wonderlands, Cyberpunk 2077 and Ghostwire Tokyo on high settings. Even after updating drivers and dropping the graphical settings to lowest, it chugged painfully with a framerate that came close to single figures at times. When it picked up and allowed me to enjoy it, the gameplay was intoxicating. 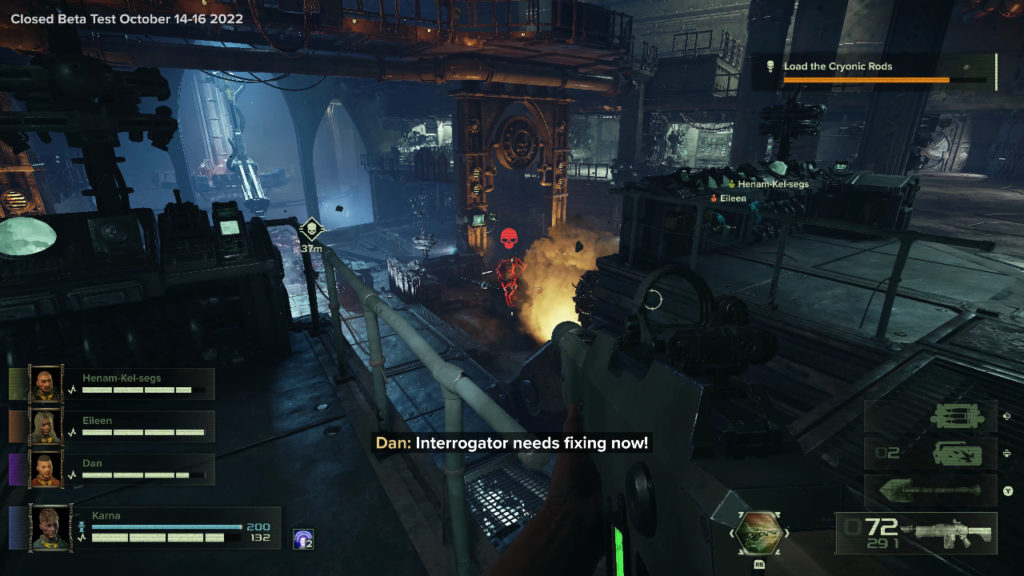 The environments are what you’d expect from Warhammer 40,000: it’s all rust and chrome and blinking LEDs, skulls on fucking everything and engine oil smear everywhere. If it’s not caked in grime it’s probably on fire. But as atmospherics go, it’s superb, with your quartet of nutters sprouting one-liners at one another with barely-constrained hatred.

Special abilities, grenades and the ability to carry and drop ammo refills or medical aid further forces the aspect of teamwork, and when the game really ramps up – usually when you’re carrying out one of the multiple objectives – it’s frenetic and deeply satisfying. Blood and limbs fly everywhere when you switch to melee damage, and there’re few more cathartic squad shooters. 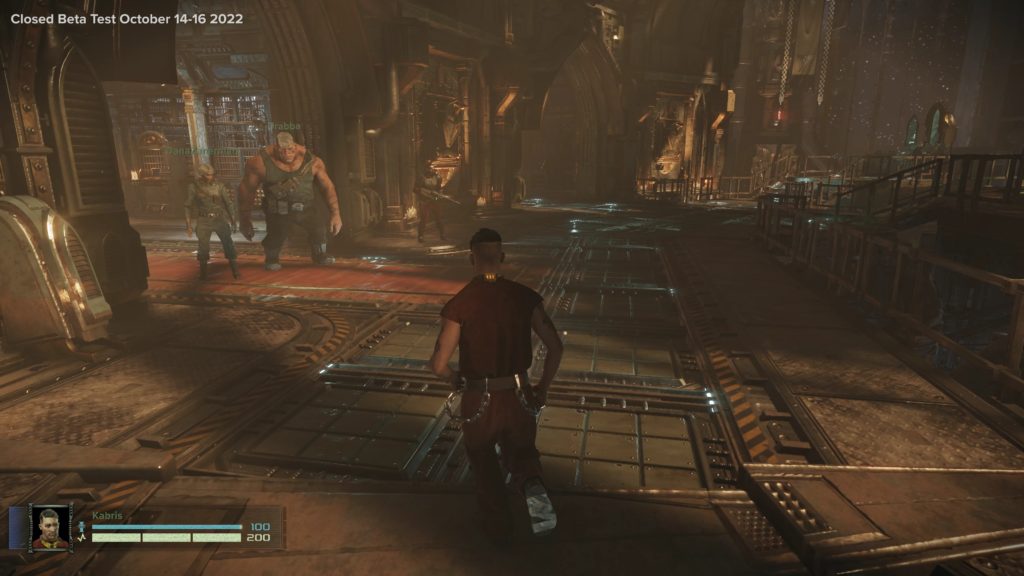 Between missions you can wander the prison complex unarmed, spending credits earned in you forays to prepare for the next excursion. Then when you’re ready you can head to a central terminal and either opt for a quickplay or choose a specific mission. It’s easy and quick, though the beta load times were a little clunky, too.

I’ve no doubt that most of these kinks will be ironed out come launch. For now, I simply can’t wait to play more. Warhammer 40K: Darktide aims to fully marry the concepts of 4-player squad shooting with RPG progression and, based on the closed beta, it may well succeed in doing just that.

Warhammer 40K: Darktide will be released in November 30 for PC, with and Xbox Series S|X release “shortly after”.

Senior Content Editor Mick has been playing games for over 30 years and writing about them for around 12. After drifting from site to site for a while, settling briefly at the now-defunct Made2Game and freelancing for the gone-but-not-forgotten NintendoGamer Magazine, he came at last to rest at Godisageek. Mick has been a reviewer, staff writer and content editor here for some time, while also moonlighting a little for Red Bull Games. He has 4 kids, has written 2 novels, and sometimes even manages to pay a bill or two. You'll usually find him defending the galaxy in Destiny 2, battling evil in Diablo 3, or lurking in the background on Twitter. Find him there @Jedi_Beats_Tank, or on XBL (JediWaster247), PSN (Jedi_Waster) or Nintendo (JediWaster).
MORE LIKE THIS
Fatsharkgames workshopSquad ShooterWarhammer