Marvel’s Midnight Suns Captain America challenge is one of those puzzles that will have you scratching your head. Old Steve Rogers is a great character when it comes to taking focus, and gaining masses of block. He can do damage to loads of enemies at once with his shield toss, but he can buff you with block stats, and aggro enemies to take one for the team.

Due to this, blocking is a major part of the Marvel’s Midnight Suns Captain America challenge to unlock his best card ability. As with all the other challenges, it requires a specific solution to a puzzle done in a direct order so you can complete it and get his heroic ability.

Luckily, because it’s a simple case of using the cards in a specific order, we can get you through the Midnight Suns Captain America challenge pretty quickly. First and foremost you’ll want to use “Punch” to knock the rear enemy carrying a card into a wall. 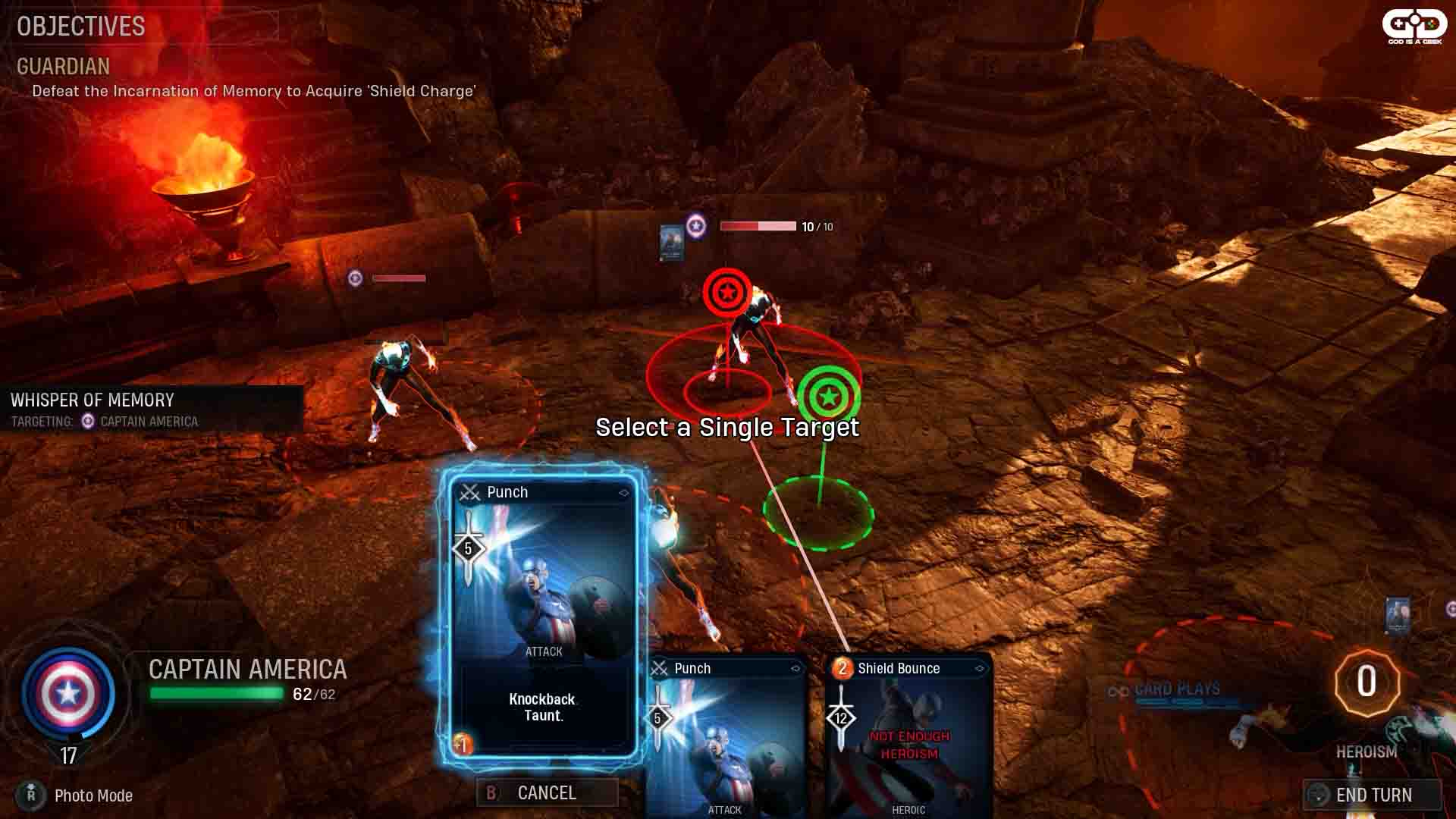 With that enemy vanquished, you’ll get a “Shield Bash” card, but ignore that for now. Instead, use your other “Punch” card to knock the enemy into the wall that’s holding “The Best Defence”. Then use that card, giving you block equal to the amount of damage you deal for the next 2 turns. This is how we’re going to get our cards stronger. 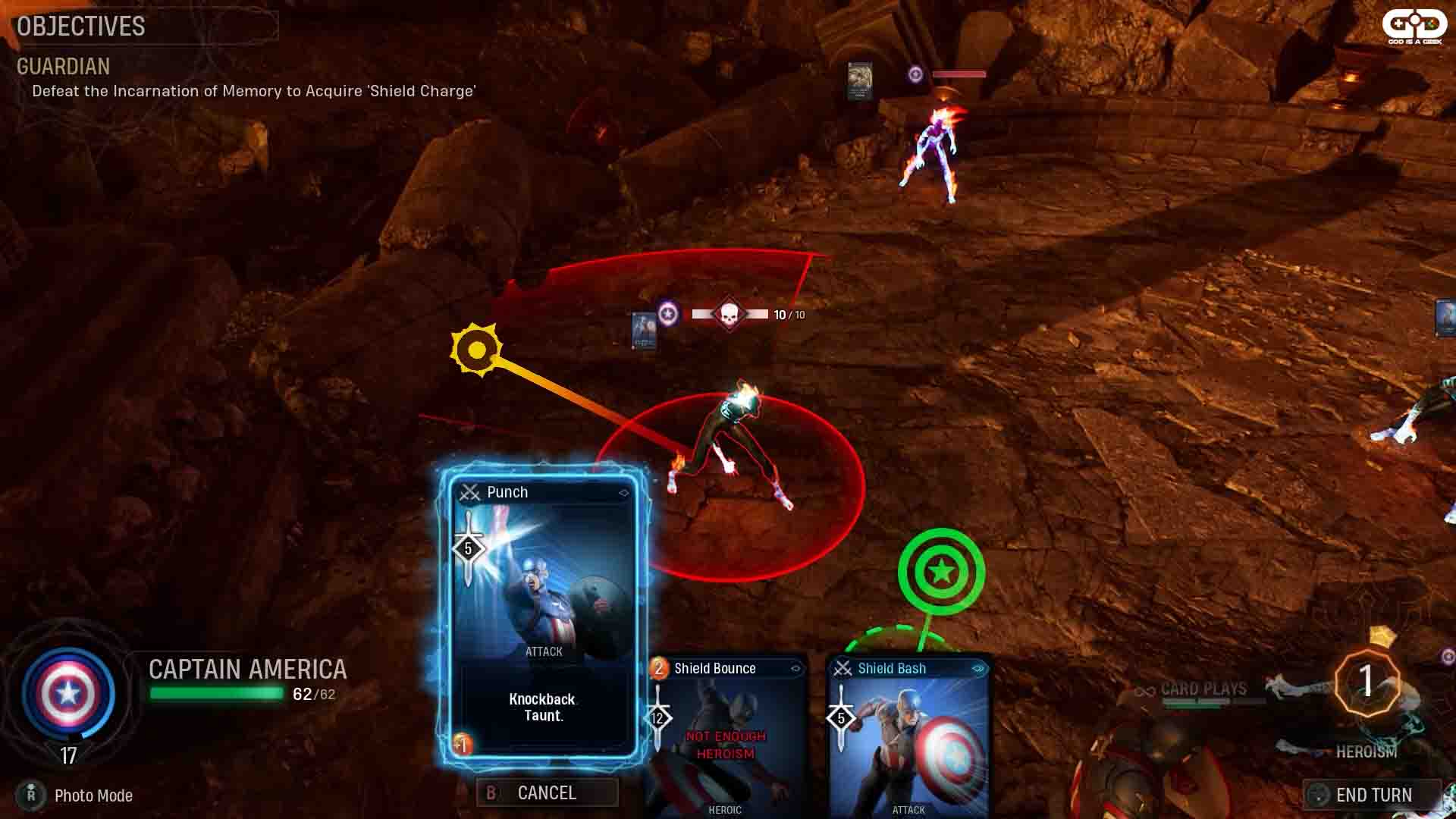 Now we’ve got enemies all around us, so let’s use “Shield Bounce” to take them all out in one fell sweep, and gain any cards they are holding onto. 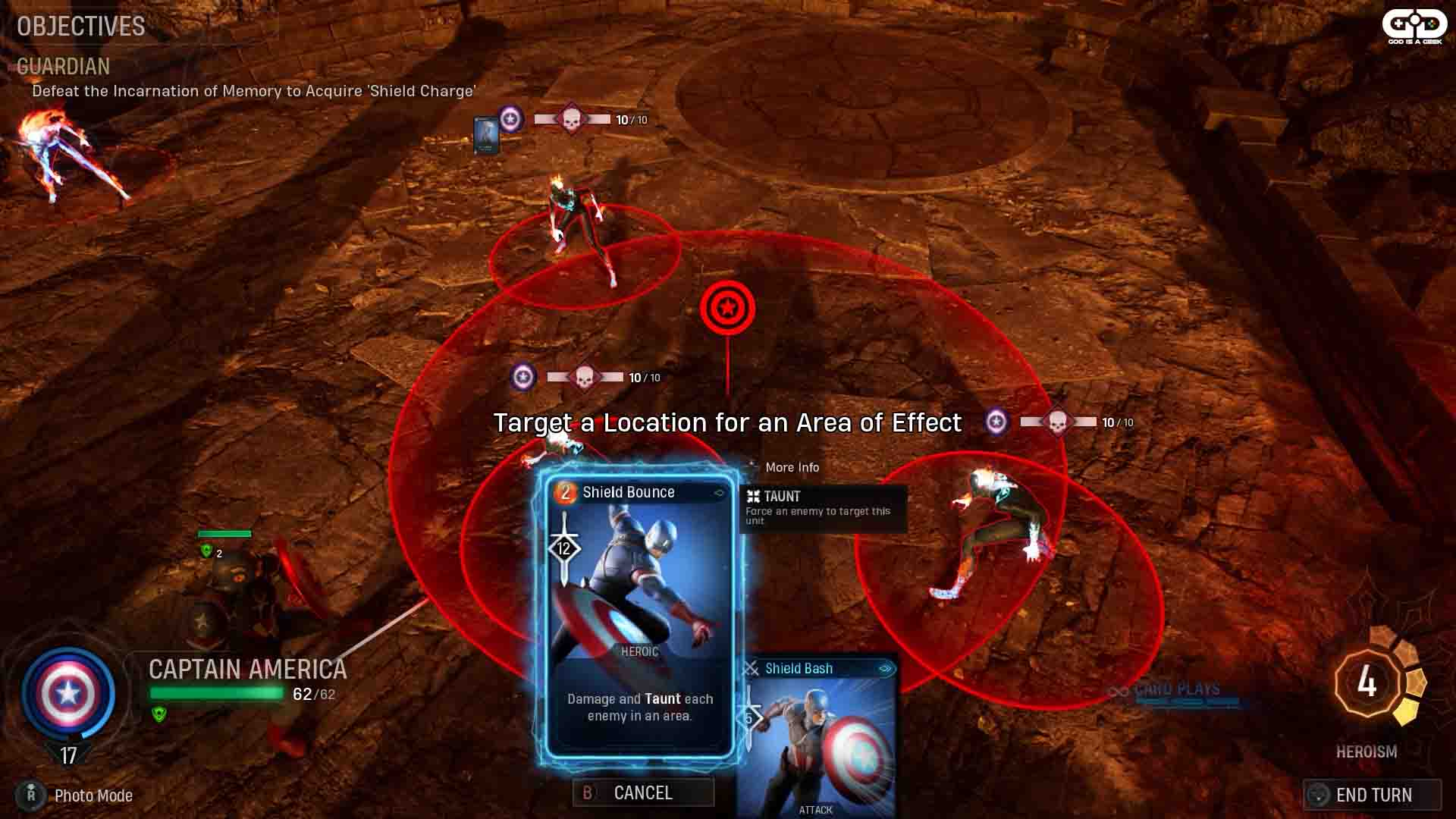 Now it’s time to buff ourself with “Tactician”, which gains 18 block AND gets you the last two cards you need to beat this challenge. 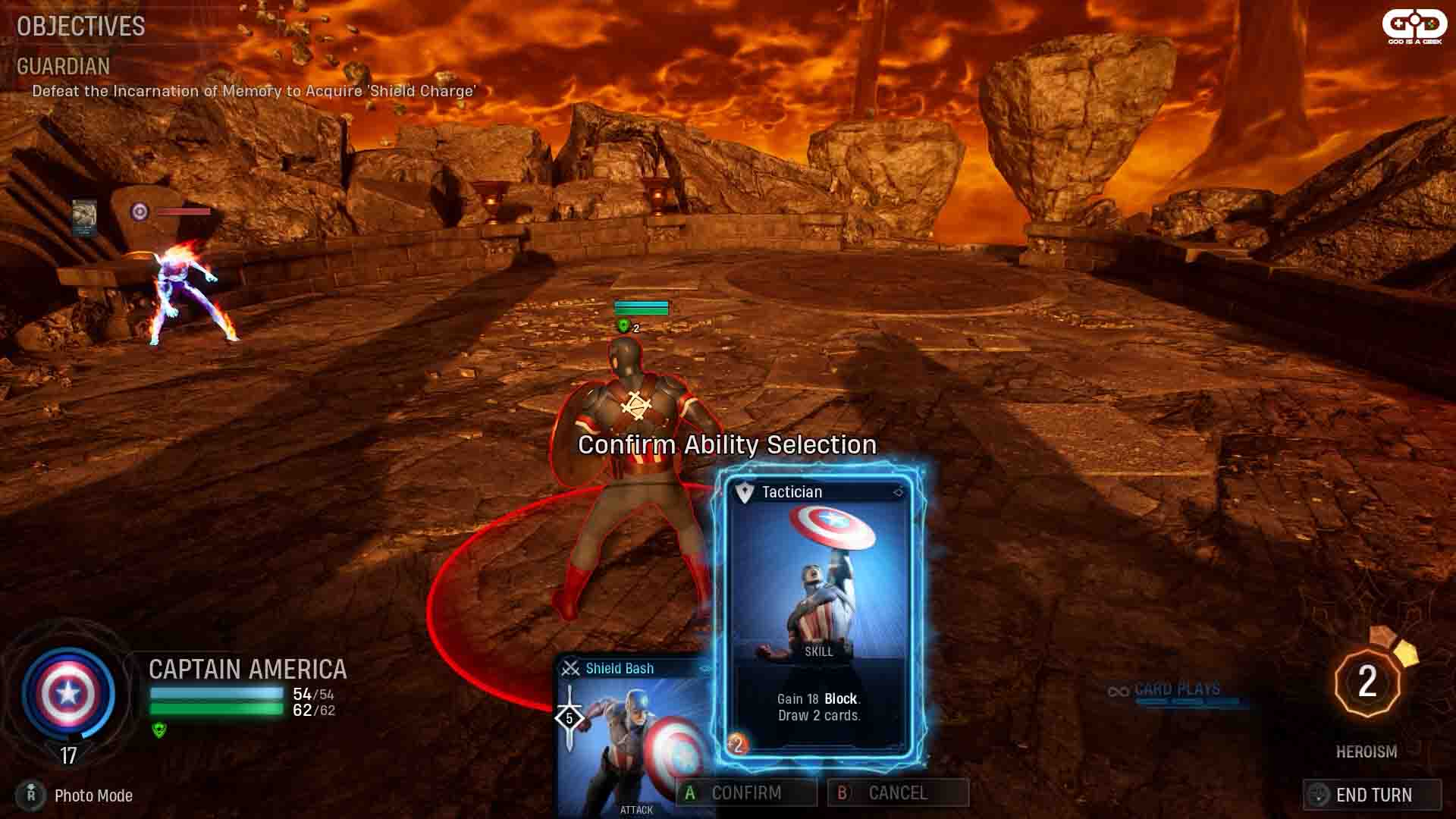 If you’ve done all these steps correctly, you’ll have 2 x Shield Bash and 1 x Punch left. Because you are adding block when you damage, use PUNCH first, then Shield Bash (you’ll gain more block), then the last Shield Bash, and that’s it, you now get to use “Shield Charge”, Captain America’s heroic ability. 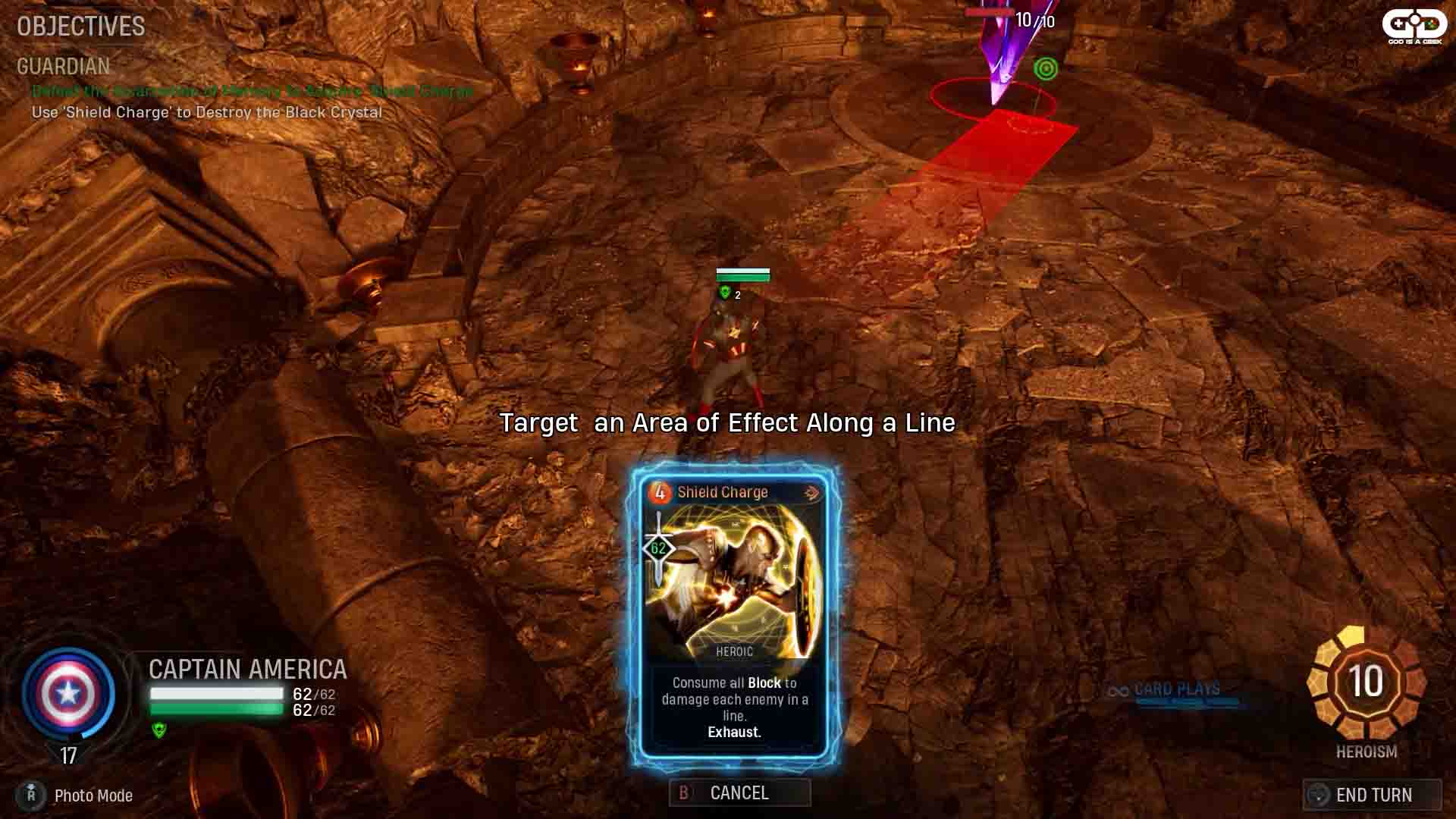 This one is a bit weird, as it looks like the attack won’t reach, but it definitely will. Use it on the crystal, and congratulations, you’ve just got Steve’s heroic ability card.

If you’re still struggling, there’s a video guide below showing how to solve it. Here’s a full playlist with all the challenges solved.