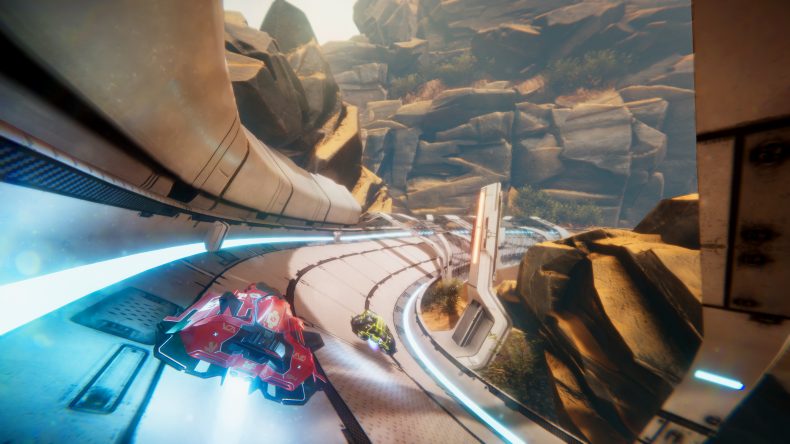 No, I don’t know what the title means, but Antigraviator doesn’t really need to explain itself, all it needs to do is be fast and visceral. You see, Iceberg Interactive’s futuristic racer is basically the result of Wipeout and Split/Second getting together for some sexy time. Albeit nowhere near the quality of either game.

Rather than simply making another game like Wipeout or F-Zero, Antigraviator goes a different way, electing to forego weapons in favour of traps. Although nowhere near as spectacular as Split/Second’s bombastic environmental traps, the idea is the same, as competitors activate electricity gates or trigger missile strikes to take down opponents. It all gets a bit hectic as you wildly swerve to avoid an explosive end.

But what is Antigraviator? At its core, it’s an arcade racer in floating ships, known as Gravs. You start off with your own Grav, which can be upgraded and customised as you earn money, and you attempt to win various types of races on twisting, gravity-defying tracks. That’s about it, really. There are a surprising amount of tracks, too. Spread across five worlds, each with several tracks, the Unity visuals are full of colour and detail. Different environments offer an impressive variety of backgrounds, from speeding through jungles and desert canyons, to riding spiralling roller coasters high above Earth. Not that you’ll have time to take in those vistas of course, you’ll be too busy screaming as your eyeballs are pushed into the back of your skull.

Antigraviator is a fast game. There is even an Achievement for breaking the sound barrier, it’s that fast. Luckily, the controls are smooth enough to keep you weaving around the twists and turns of each track. As long as your reactions are good enough, of course. Your air brake will help keep you off the walls, but if you do find yourself stuck grinding against the barrier, a flick of the right stick will have you barrel-rolling out of harm’s way. This move is useful for batting away competitors too, but it does slow you down slightly. It keeps things fresh with a few different game modes, like Deathrace which eliminates the last competitor on each lap until only one remains, or Pure which removes all traps and leaves you to simply race. That’s the worst one, to be quite honest. It showcases the rather frustrating rubber banding in Antigraviator, or rather, the complete lack of it once opponents get ahead of you. If you’re ahead, they’ll keep coming back at you most of the time, but in Pure if you make any kind of mistake, your race is over. There’s no difficulty options either, you either run a flawless race or you risk finishing last.

You can at least upgrade your Grav to be more competitive, but that’s expensive and campaign rewards are meagre in the early stages. You only start out with access to one Grav too, with only a handful of others to buy and they’re ludicrously priced. It’s a real grind to unlock the other Gravs, especially if you want to customise them.

For the most part though, Antigraviator is a fun game. Campaign mode throws different race types at you across different locales, difficulty increasing as you progress, and even the more frustrating races are still intense as you fly along at eye-watering speeds. But it needs a bigger selection of Gravs, especially ones that are available from the start (one simply isn’t good enough) and the AI needs addressing, especially in Pure mode. Still, there is plenty of fun to be had, if you don’t mind the grind.

While it does have its issues, Antigraviator is a fun and eye-wateringly fast sci-fi racer.