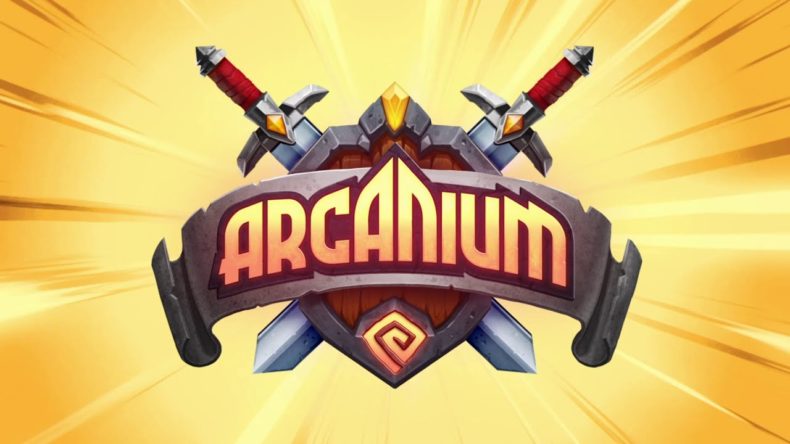 In a genre filling up with more games every month, how can you stand out from the pack as a roguelike deck builder? That’s the question that more and more developers are having to ask themselves now, as the card-based genre gains popularity. I love building a deck to beat up hordes of monsters, so thought I’d see if Arcanium: Rise of Akhan did anything interesting to spice up the genre.

In a tumultuous fantasy world full of animals, it’s up to you to select a team of three furry or feathered heroes to battle against evil. Arzu is a land in peril, and with the threat of Arkan the Calamity ever looming it’ll take all their skill to succeed. It’s a cool world, but don’t expect a whole bunch of story to guide you through here. You’ll be too busy upgrading your decks to care anyway.

That’s right I said decks plural. Each member of your team has their own deck of up to fourteen ability cards, which are what you use when battling the evil monsters trying to ruin your day. Battle take place in three lanes, and are always against three enemies. Each turn your characters have a set amount of AP to spend on different cards, which all have plenty of different effects. 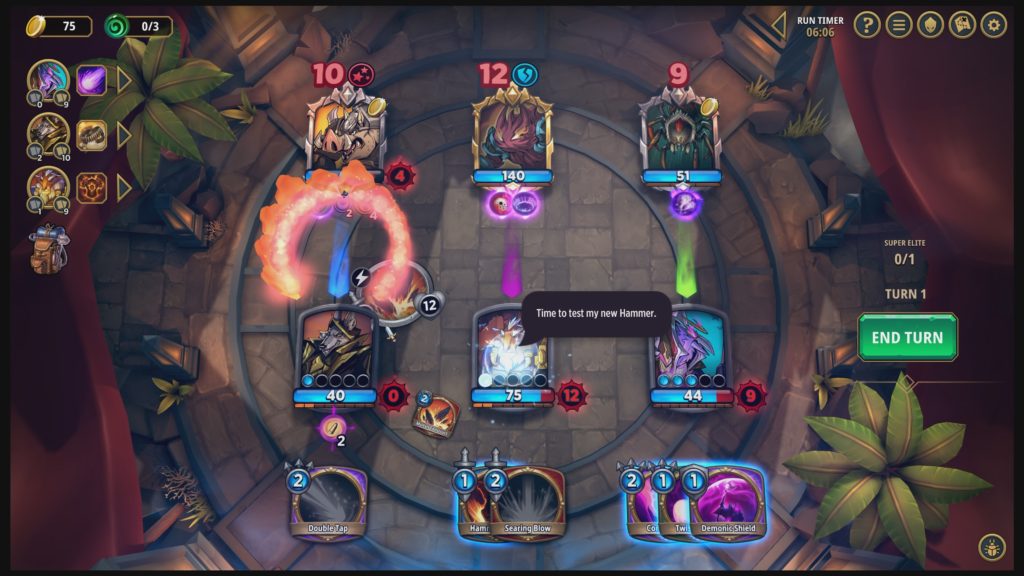 Some of the more basic cards will simply deal or block damage, but even at the start of a run you’ll have cards that do things like Leech, Weaken or Burn. The number of different status effects is frankly overwhelming, and if this is your first deck builder you’ll likely struggle. Even after many hours of battles I’d be constantly right clicking to see what the hell all these confusing terms meant.

Attack cards fall into a couple of categories, melee and ranged. A melee attack can only hit the enemy directly across from you, whereas ranged attacks can target any adjacent lane. You can also swap positions with the character next to you for the cost of a single AP, which is important when damage is coming your way and one of your characters didn’t draw any block.

Although it’s fairly complex, a lot of this will sound at least somewhat familiar to deck building veterans. Arcanium has plenty more to show off though, like the inclusion of minions. These summonable monsters have attack and health, and essentially serve as a wall to block incoming damage for as long as they survive while also chipping away at your foes. I was really surprised when this deck builder suddenly turned into Hearthstone, and immediately tried to choose the heroes with minion based decks. 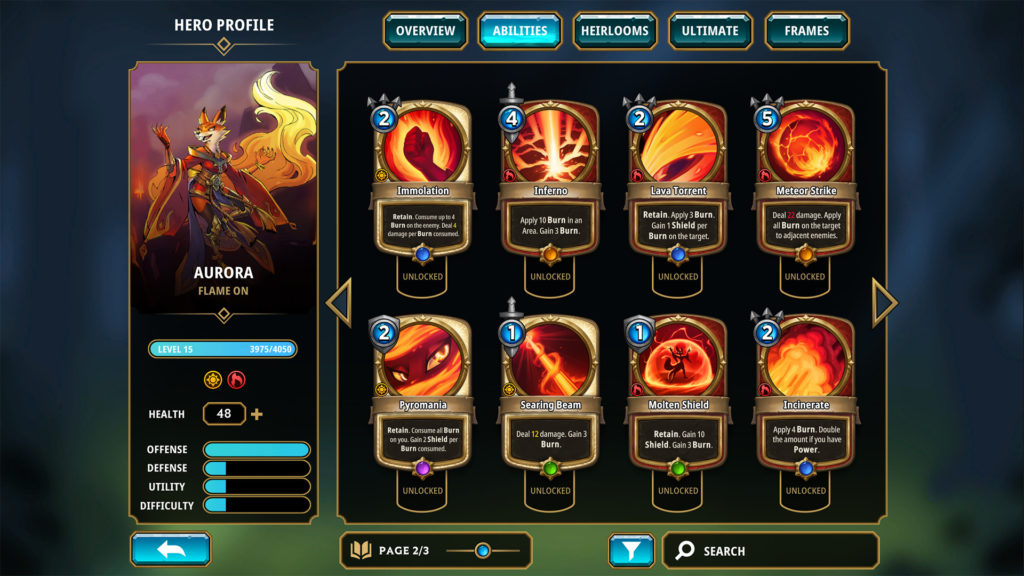 It’s pretty wild how different each selectable hero is. They all have totally different decks and wildly different ways to play effectively, which is impressive when you realise there are sixteen available at launch. Some characters deal massive damage if you can combo enough cards in a single turn, some focus on never taking damage with ultimate attacks that negate the pain in a pinch, and some try to summon a butt load of skeletons and explode them in an enemies’ face. You only start with three so you’ll want to focus on unlocking a variety of them asap, because it’s so much more fun when you do.

Outside of the actual battles, Arcanium takes place on a huge map made up of hexagon tiles. Each tile has some sort of event on it, ranging from different difficulties of battles to campfires and conversations which will lead to you upgrading your decks or heroes in some way. You’ll probably want to choose any and all tiles that contain upgrades early on, because the difficulty ramps up insanely quickly.

Normal battles are hard enough, but the map of Arcanium has plenty of Elite battles and Shard battles to try and take on if you dare too. These fights always offer higher rewards, but will decimate your team if you aren’t on the ball. The difficulty on the whole is pretty intimidating, and even after reluctantly changing the difficulty to casual I got beaten up pretty consistently. 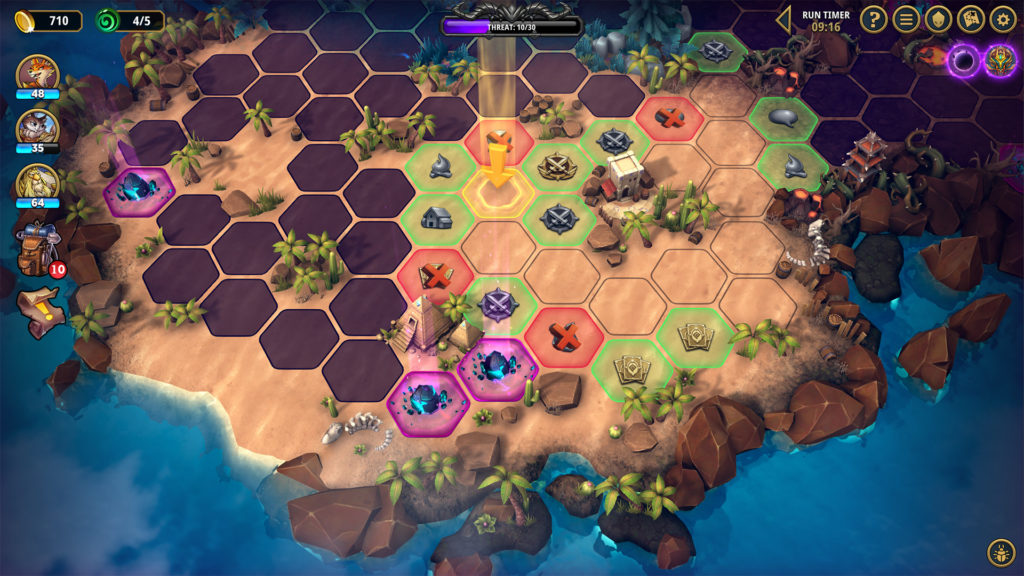 Once you visit enough tiles the threat meter at the top of the screen will fill, and when it’s full you’re in deep trouble. At this point the map starts to rapidly fill up with boss tiles, and if you’re anything like me your run ends. Beating the bosses is incredibly difficult, with each having a unique strategy needed to overcome them. At least I assume that’s how it works, because I personally beat two in total.

If you can’t be bothered with the hexagon board part of Arcanium and just want to card battle your life away, the arena mode is for you. This is all action all the time, with mini booster packs of cards to choose from between each fight. It’s nice that there’s the option to play the game both ways, I only wish there was a way to make either of them easier.

Arcanium: Rise of Akhan is a good deck building game, but its extreme difficulty and overall complexity hold it back from being a great one. If you really put the effort in there’s a lot to enjoy, with some unique elements like minions and lanes, but if you’re not a deck building prodigy you should probably hone your skills elsewhere first.

Way too complex, especially early on
Incredibly difficult even on the lowest difficulty
The starting heroes are a bit lackluster

Arcanium: Rise of Akhan is a good deck building roguelike, but the complexity and difficulty make it hard to recommend to all but the most hardcore.