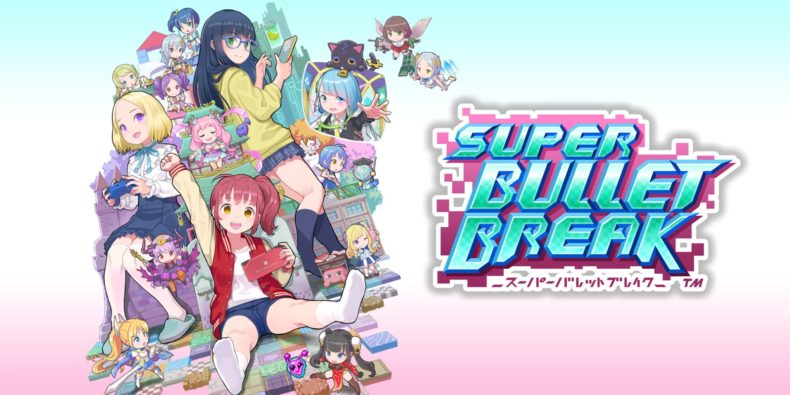 Anyone who’s spoken to me about games for long enough will know how much I love cards in video games. From my early years playing the Pokemon Trading Card Game on the Game Boy to picking up tarot cards in Cult of the Lamb, something about a virtual cardboard rectangle just makes me smile. With roguelike influences and thought provoking gameplay, the Deck Building genre has captured me like little else over the past few years, so I was excited to see what PQube had in store for me in Super Bullet Break.

The premise of Super Bullet Break is absolutely wild. Numerous online video games are breaking, and it’s due to characters called Singulaladies. These characters have been sent from the retro game Bullet Break to ruin popular titles by turning the AI self aware. Thankfully Nayuta has a plan, to hack into these games and recruit gamers to take down the Singulady causing the problems. It’s all slightly baffling, but the important thing is that you’ll have to fight lots of rogue AI in card battles to save the day. 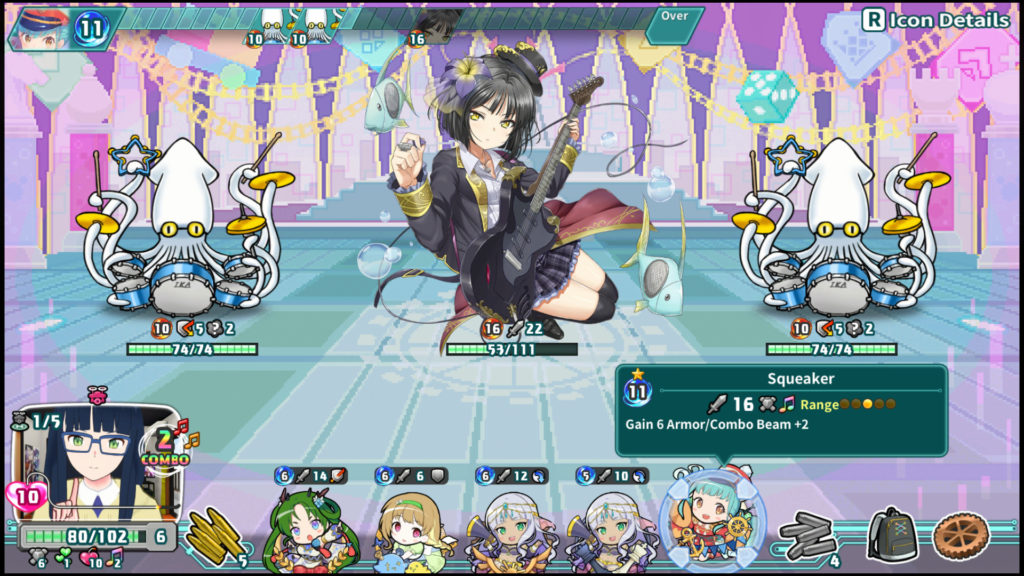 There’s a catch though. These cards aren’t just any cards, they’re actually scantily clad girls called bullets. They do just work like cards though. You’ll start every battle with a hand full of them, and each has a specific cost to play them and deal some damage to your enemy. Each enemy will wait for a certain amount of cost to be paid before their turn, so paying attention to the action bar and seeing which bullets you can squeeze in before they attack is really important. Each Bullet has a variety of effects too, and you’ll need to engage your brain to figure out what to play.

You can always see what your enemies are going to do next, so reacting to that with the right bullet is key. If there’s a load of damage coming your way, play bullets that give you shield or armour to block it. If an enemy is preparing to defend themselves, hit them with all your highest attack bullets and try to knock them out before they get a chance to. If you’ve played a deck builder before you probably know what to expect, but don’t victory won’t come easy if you don’t gather the right gals.

After every fight, from shops or as rewards for helping out characters you’ll be given plenty of options for more bullets, but you’ll need to decide if they’ll help make your deck better or water it down. Collect too many offensive bullets and when the enemy comes in for the kill you’ll have no way to defend yourself, and disregard special classes of bullets at your own peril. 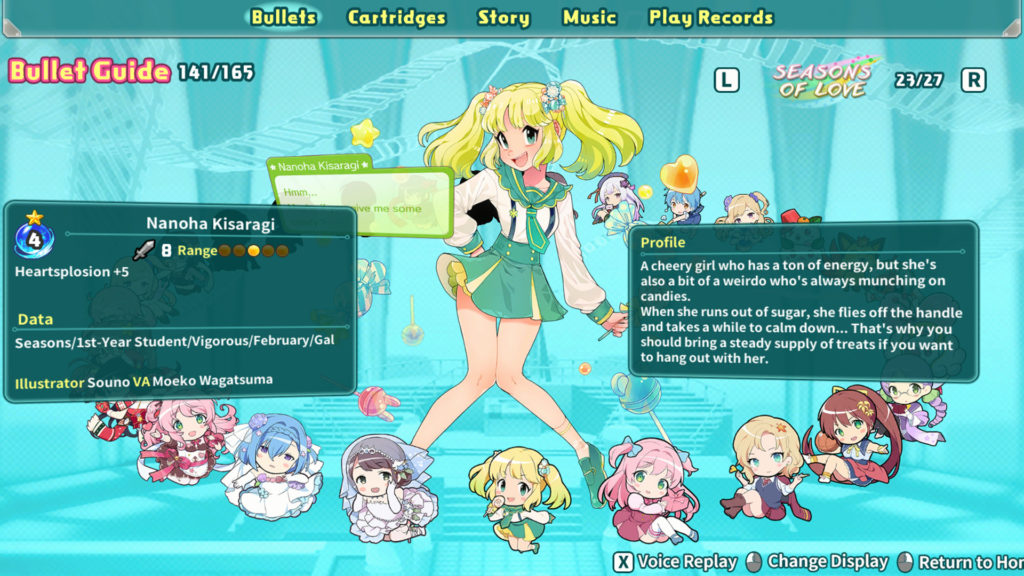 There are a ton of bullets that work well together, and if you’re clever you’ll manage to put together a deck full of them. Heartsplosion bullets cut the cost of your bullets in half if you manage to build up 100 Heartsplosion points by playing them in a battle, whereas Combo Beam bullets will deal a hefty 20 damage to all enemies if you fire off enough of them to build up 20 Combo Beam points. It’s important to learn about all these different effects if you want to win, because slapping together a deck of your favourite girls just won’t work.

Between fights you’ll be greeted by a map of branching paths, and it’s your job to choose the best route to survive all the way to the end. If you think you’ll be running low on health any time soon you might want to head to a rest point, whereas if your wallet is overflowing you’ll probably want to stock up on new recruits and powerful single use items at a store. In the end though all paths converge at a boss, who will be more than happy to wipe the floor with you.

If you’re intimidated by the idea of a deck builder then Super Bullet Break might not be the game for you, because it is brutal. From the very start you’ll have dozens of status effects and bullet types to learn without any hand holding whatsoever, and even once you know how to play you’ll still get stomped into the ground repeatedly. The first world (in which you’re mainly expected to play slightly simpler cards) took me hours to beat, and finally managing it felt tougher than finishing most games. There are seven in total, with increasing difficulty and plenty of new deck types to try as you go. 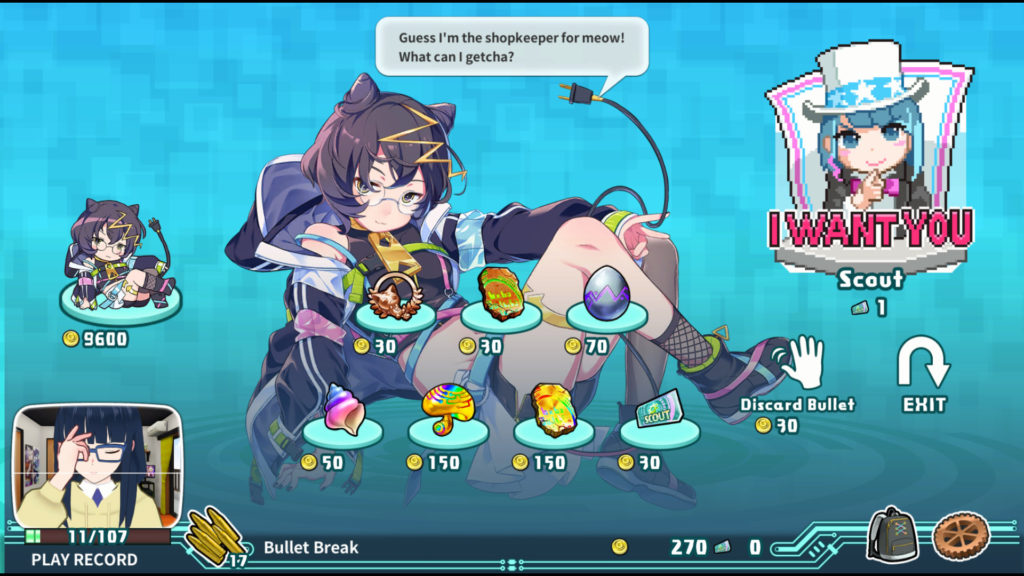 Even if the difficulty does appeal to you, there’s a significant chance the barely dressed babes will put you off playing Super Bullet Break. Every single bullet is represented by a girl wearing as little clothing as possible in a compromising position, and the first time you collect them you’ll be greeted with a sexy (mildly animated) pose. If this isn’t the sort of content you can stomach then this simply isn’t the deck builder for you.

Super Bullet Break is a deck builder that doesn’t hold your hand and will happily send you to the game over screen over and over again. If you can learn its mechanics though (and if you can tolerate the NSFW content) you’ll really feel accomplished as you finally topple the Singulaladies and save the world of video games.

Super Bullet Break is a fun deck builder if you don’t mind a challenge, but the amount of barely dressed girls is a bit embarrassing.