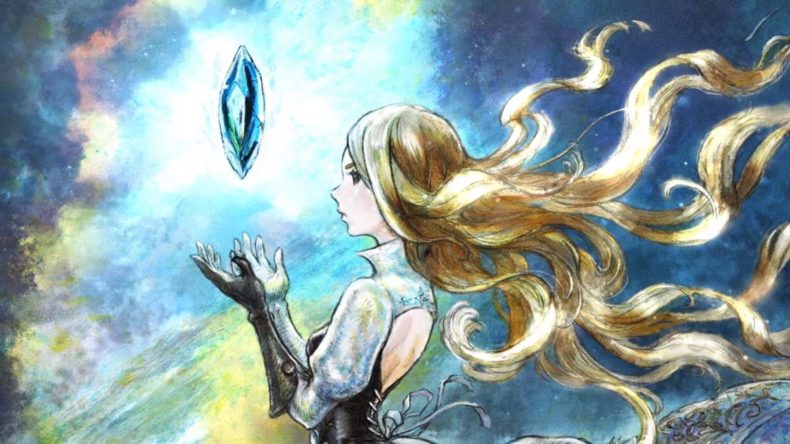 I can’t remember the last time I spent hours with a JRPG. I’m one of those unfortunate souls who hasn’t gotten around to playing Octopath Traveller yet, which still bothers me every time I come across it on the Nintendo eShop. I’ve spent hundreds of hours over the years playing titles from the Tales Of, Final Fantasy, Suikoden, and Dragon Quest series, but it’s been a long time since I’ve immersed myself in the grind of a Japanese roleplaying game. Bravely Default II requires patience, dedication, and hard work to get the most out of it, and if you’re willing to roll your sleeves up and get stuck in, you’re likely to have one hell of an adventure.

On the surface, Bravely Default II has a relatively generic story. Four elemental crystals have gone missing, and it’s up to you and your friends to find them across the continent of Excillant. Claytechworks has managed to build an incredibly dense narrative that makes you care greatly about all four of the main characters, and when something happens to any of them, your connection and love for each one becomes more apparent with every twist. There’re some surprisingly dark turns in the story, which was something I wasn’t expecting. It may appear cute and child-friendly on the outside, but you’re going to be faced with some emotional and heavy story beats.

Whilst you’ll meet a wide range of characters on your journey, the four party members remain the same. Princess Gloria is an honourable and caring woman who wears her morals on her sleeves; Elvis is a happy-go-lucky scholar who uses his humour to build his bond with others; and Adelle is a fearsome warrior that you most certainly don’t want to mess with. Then there’s the main character: you. In my case, Kryyst was a badass with a heart, always trying to do the right thing whilst giving his life to Gloria’s cause, and anyone in need of help. I’ll genuinely miss spending time with all four of them. 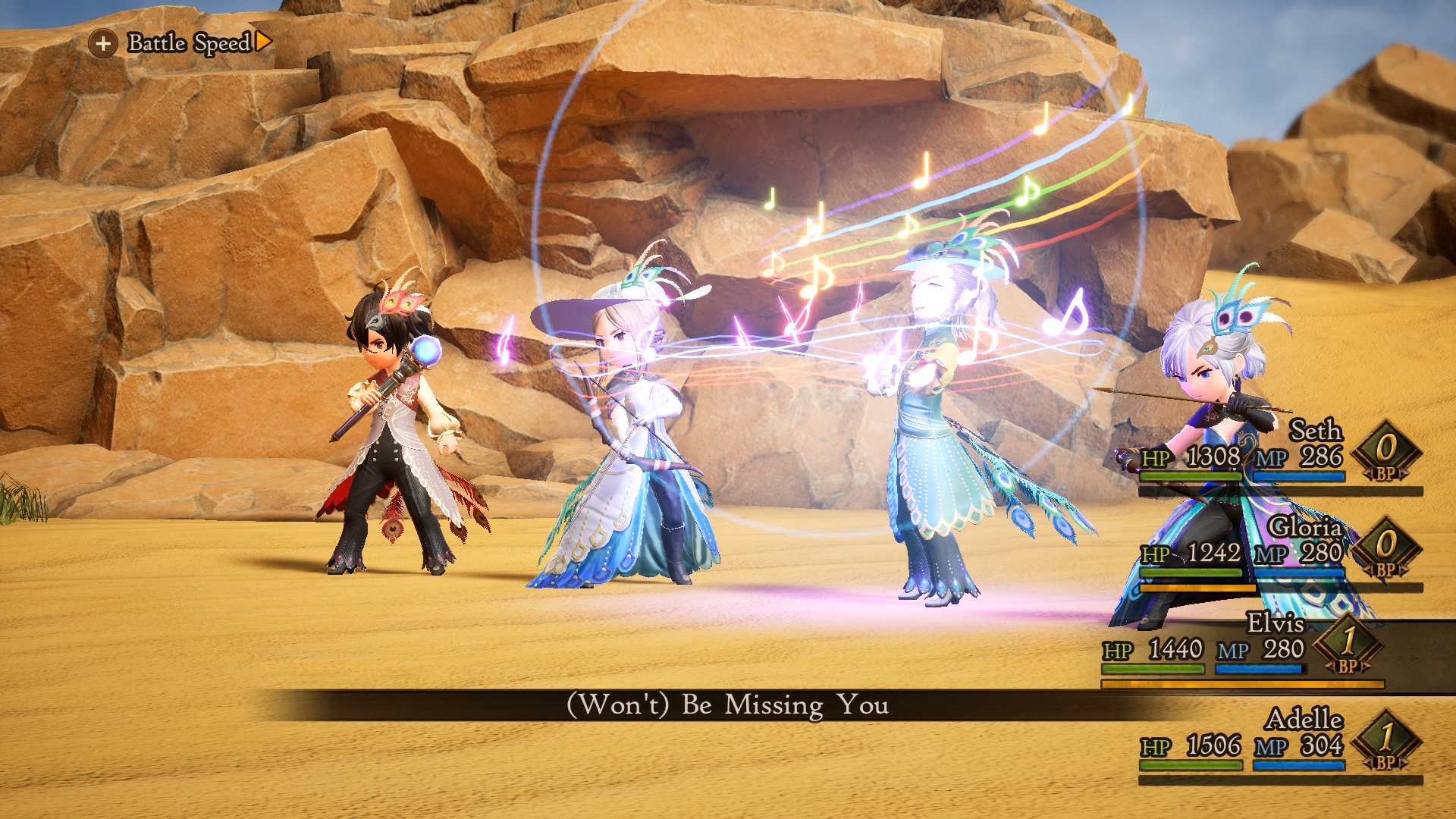 Bravely Default II is a beautiful game that’s filled with plenty of colour and detail. The cities you visit are gorgeously hand-drawn, and the environments you travel across are filled with secrets and beauty. Chests filled with potions, weapons, and other items are littered across each location you explore, and finding each one becomes just as much of an objective as the main story and the variety of side quests. You’ll journey across snowy tundras, vast deserts, and dense forests where monsters lurk in every crevice. Each place is vibrant, and no two areas feel the same. You’ll also enter various dungeons that take on different shapes and sizes, such as mountain passes, sewers, and mansions. They don’t offer many save points, so go in with a healthy assortment of potions.

Thankfully, there are tons of items that can be bought at local shops and found in the field, and they all offer tons of support. Potions to cure various ailments, JP Orbs to level up job roles quicker, better weapons and armour, and elemental and weapon-based objects can be acquired as well. Tents will let you recover at certain points in the dungeons, Ward Light makes you invisible to enemies, and Teleportation Stones allow you to return to the start of a dungeons. Whatever the item, you’ve always got a potential ace up your sleeve regardless of the encounter.

Whilst you will spend your time travelling across Excillant, the main focus of Bravely Default II is its combat. You’ll end up fighting hundreds of monsters in your time reclaiming the lost crystals, and there will be times when you’ll become overwhelmingly frustrated with it. I lost count of the times I spent hours grinding to overcome a particular boss, only to be faced with another who was easily able to overcome my party and I. If you want to get the most out of each fight, you need to spend time levelling up your XP and your Job level. There’s no getting around it at all. Unless you’re prepared to sink tens of hours fighting enemies over and over again, you’ll fall at every hurdle. 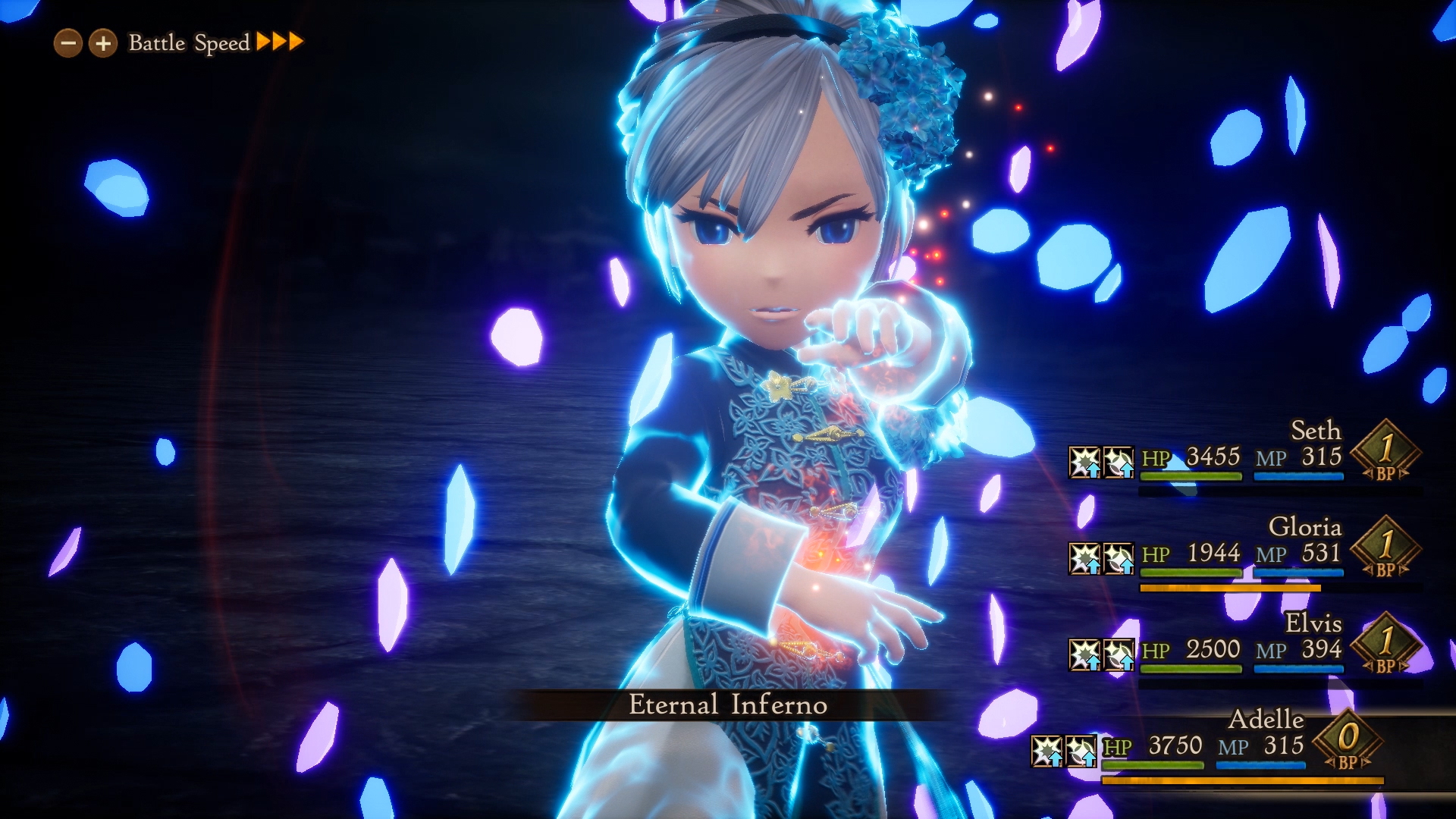 Now that caveat’s out of the way, Bravely Default II has one of the finest battle mechanics I’ve seen in the JRPG genre. The Brave/Default system offers a tense game of trial and error as you decide whether to attack or protect on your move, or hold off for a turn in the hopes your restraint pays off later. By using Default, you’ll store an action for your next turn. This can mean your character could be attacked or affected by a condition such as poison or confusion, rendering your patient approach worthless. If you manage to get to your next turn unscathed, you’ll be able to unleash two or more actions by activating your stored Brave Points. It’s a system that can provide significant bonuses to your party, but it can also affect you greatly.

Thanks to such a deep range of Jobs, your characters can unleash tons of moves and buffs on each round. In the early stages, you’ll have access to a few Job paths, such as the Black Mage and Freelancer, but as you progress more will unlock. Once you start to gather more and more, each of your party members can level up a main job, and have a sub-job to play around with. For example if Elvis maxes out the Black Mage (a mix of various elemental magic attacks), he can pick another to select as his main job and level it up. The system helps to provide specific roles for your party, offering tons of paths that help you in each battle.

Berserker gives you opportunities to do plenty of damage to an enemy, but it can leave you exposed as a result; Beastmaster doesn’t do a lot of damage, but it can turn monsters against each other; Vanguard offers a nice mix of shield and weapon attacks; White Mage can be leveled up so that your party remains healed at all times; and Bard helps to increase your party’s defence and places effects such as sleep on opposing monsters. There are many more, and having such a wide range of roles for your party makes Bravely Default II both exciting and tense. 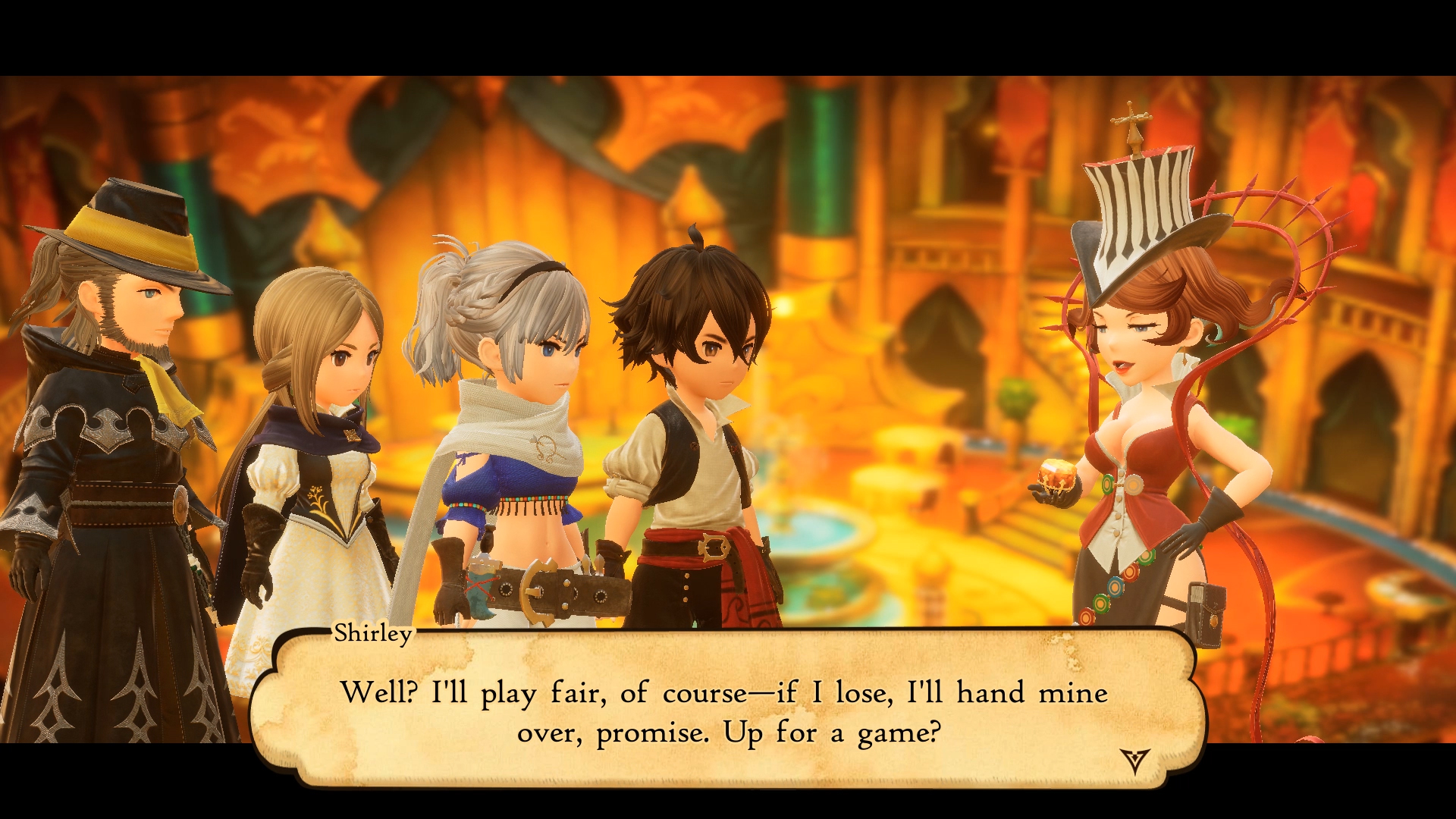 Every monster has the Brave/Default mechanic as well. Not only that, but they can also have job roles. The need to fight everything you see can feel like a chore, especially as you have to spend hours doing it between almost every boss fight, but it’s the only way you’ll get to learn enemy attack patterns. Each foe has a weakness, be it an elemental effect or a weapon, so it’s always important to study them with the ‘Examine’ ability in the Freelancer job, or by using a magnifying glass to reveal important information. However you choose to approach a fight, the options are endless, and more often that not, you’ll find them thrilling and tense. Another key feature of every attack is the ability of surprise. If you approach an enemy and press “Y”, you’ll initiate the fight with a Brave Point for each of your party members. Sometimes you’ll be ambushed without even realising, but for the most part, you’ll be able to use this approach to your advantage.

Boss fights are exciting, but can also yield heart-breaking results. There’s no particular rush between each attack, so battles play out like a game of chess. You can be as careful as possible, but one wrong move will see all your hard work disappear down the drain. There’s no avoiding the fact that you will replay these boss fights over and over again. Some are easier than others, but they’re where Bravely Default II is at its most challenging. No two fights are the same, meaning attacks differ every time. It is in these moments where I lost my cool with it, and I often turned my Switch off in disgust. Every time I did though, I would always boot it back up within minutes as I felt compelled to dive back in and punish them for their victory.

Though combat is the main focus, you can play a fun little card game with certain NPCs, take on side quests to earn items, weapons, or armour, and travelling between cities becomes much easier when you unlock fast travel. There is also a feature that can help to reward you when you’re not even playing. You can set off on expeditions before you put your console in sleep mode, meaning that when you’re not playing, your party head off on the high seas in a bid to collect treasure that can then be claimed when you jump back in. Visiting the Expedition establishments after booting your Switch back up lets you see what your party has gotten up to in a text-based format, and allows you to obtain cool stuff as well as XP without the need to lift a finger.

Bravely Default II is filled with punishing battles that push you to the limits of what you believe to be possible. You might start a battle with someone and suffer greatly, but grinding is the only way you’re going to succeed. It may frustrate, especially as difficulty ramps up from boss to boss and area to area. Even though there’s a ‘casual’ difficulty, trying that out I found it to be no different from the normal setting. Old school JRPG fans will think nothing of it, though, as anyone who has played a hardcore turn-based game from the east will know the learning curve is steep, and the challenges are great. Whilst the cities and environments are beautiful, some of the cutscenes and character animations are a bit weak. The music is wonderful at times if a little repetitive, but it is the variety in your battle options that make it stand out from the rest. If you’re willing to be patient and spend time fighting relentlessly throughout, Bravely Default II is hugely rewarding.

Bravely Default II is punishing at times, but if you're willing to spend time grinding for XP, there's plenty to reward the most patient of players. The Jobs are a definite highlight, and the Brave/Default battle mechanic is a unique and fantastic feature.