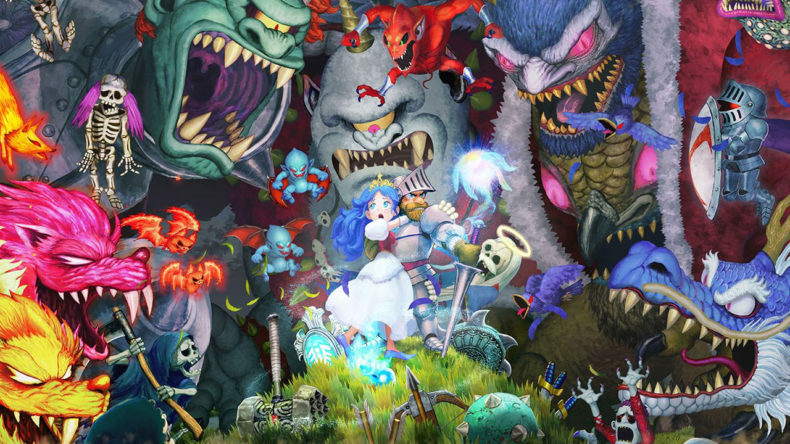 I can’t honestly say I’ve truly enjoyed the time I’ve spent with Ghosts ‘N Goblins Resurrection. While I was certainly excited at the prospect of reliving my younger (much, much younger) days, and relish a fresh challenge whenever I can get one, actually jumping back in was a bizarre combination of warm nostalgic feels and screen-punching frustration.

I remember the days spent playing these games over and over again with my siblings, pushing each other to keep trying, learning every level and enemy movement, where they appeared and how best to pre-empt their attacks and stay alive. But one very important element separates my experience now and my experience then: it’s not the early 90s anymore.

So, okay, that’s kind of the point, that’s the whole point in resurrecting this game. But where Capcom have made some fairly large changes to the mechanics and composition of the game, they haven’t so much as tweaked the difficulty in any noticeable way. There’s an easy mode (Squire) and an immortal mode (Page), but there’s a definite sense that this is not how the game is meant to be played. Legend, the hardest difficulty, is the default. There are elements of Ghosts ‘N Goblins Resurrection that really, really needed a little balancing. 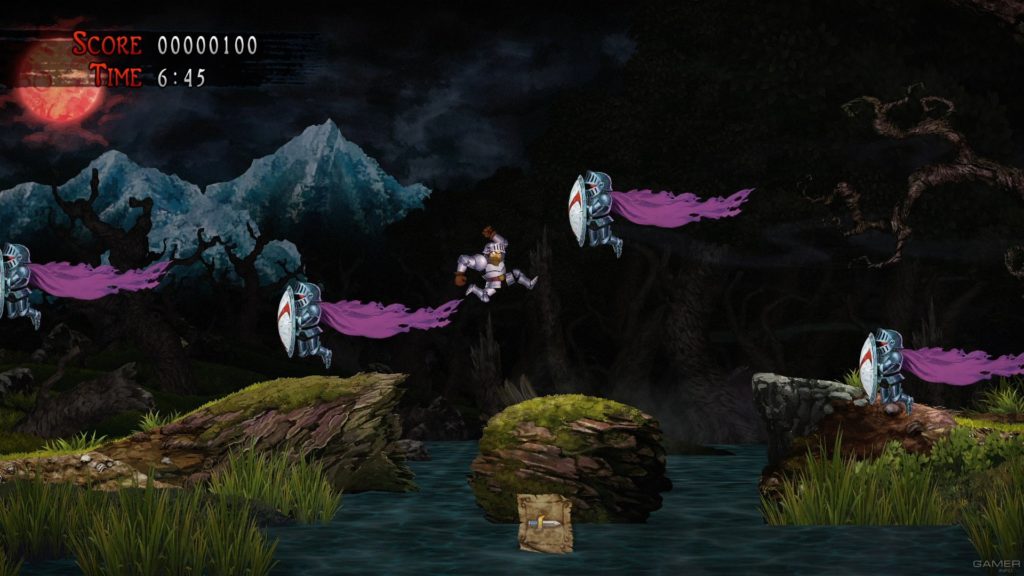 As an example, hero Arthur – the brave knight off to rescue Princess Prin-Prin from the clutches of darkness – is about as agile as a drunk panda in a suit of armour, and can only jump a set distance every time. This requires pinpoint accuracy from you, which is often simply very hard to judge. It’s not uncommon to misjudge a jump the first time and then readjust the next time to get it right, whereupon you land on a suddenly spawning enemy or trap that you couldn’t know was there. Arthur starts off in a full suit of armour and loses a bit with every hit until he’s running about in just his undies, and I feel like I spent more of the game in my kecks than fully dressed.

The addition of magical attacks is, frankly, bizarre, as I struggled to find safe spots to cast spells. Enemies simply run, fly or crawl towards you and all you can do is throw your weapons at them as fast as you can, which doesn’t leave a lot of time for magical dalliance. Also, some of the new weapons like the boulder are useless against some enemies and you can’t switch until you find a replacement.

This challenge is nothing you can’t overcome, of course. I’m not suggesting there’s anything impossible about the remaster, but the first boss in particular took me so many attempts I almost gave up completely. There seems to be little routine to the attacks, so every time you think you’ve got a handle on how to avoid danger and reposition, it will do something that feels almost random. As there’s no way to heal during a boss fight, this simply leads to more frustrated growling. Or at least it did for me. And dropping the difficulty didn’t seem to make an awful lot of difference. You can slow the game down by adjusting a setting in the menu so it feels more like it did back in the day, but again, I didn’t feel much of a benefit from this as it slows Arthur down as well. 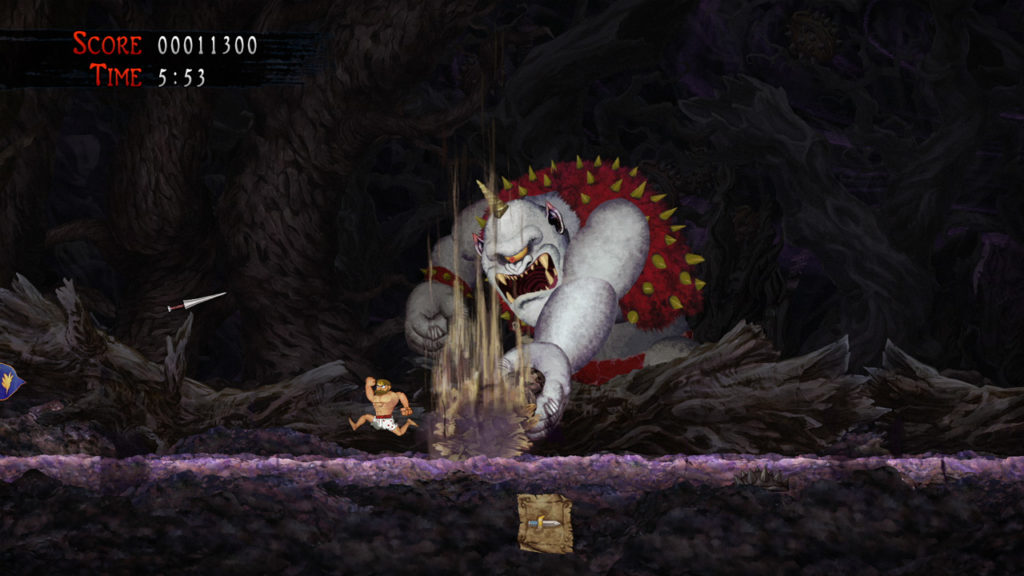 It’s a bit of a shame, to be honest, because there’s a lot to like on the surface. The new visuals are pretty enough, and I had to watch videos of the original to see the difference as my rose-tinted glasses convinced me it looked the same. It did not. There’s also the rather superb soundtrack that does more to take you back in time than the even the punishing difficulty does.

Capcom have also drafted in levels from some of the later games – notably Ghouls ‘N Ghosts, which is the one I spent the most time with in my distant youth – and have allowed you to take multiple paths through the campaign, and even play cooperatively with another player. The multiplayer, though, doesn’t really add an awful lot besides a second person to occasionally swear and throw a controller at the telly. It’s nice to have the option to play with someone else, though, even if the game is ultimately nowhere near balanced or nuanced enough to make the most of it.

Ultimately, Ghosts ‘N Goblins Resurrection exists for two groups of gamers: the first are the hardcore thrill-seekers who like their games to be as hard as humanly possible; the second is the nostalgia crowd, who, like me, remember these games fondly because we’ve forgotten that the only reason we were so good at them is because we had nothing else to play and so rinsed them over and over. These days it’s hard for me to fully enjoy and engage with a game that just wants me to die over and over with little real progression as a result, especially when the difficulty feels so arbitrary. This isn’t Dark Souls difficult, or even Super Meat Boy difficult. It’s just 80s difficult, and that’s a different issue entirely. 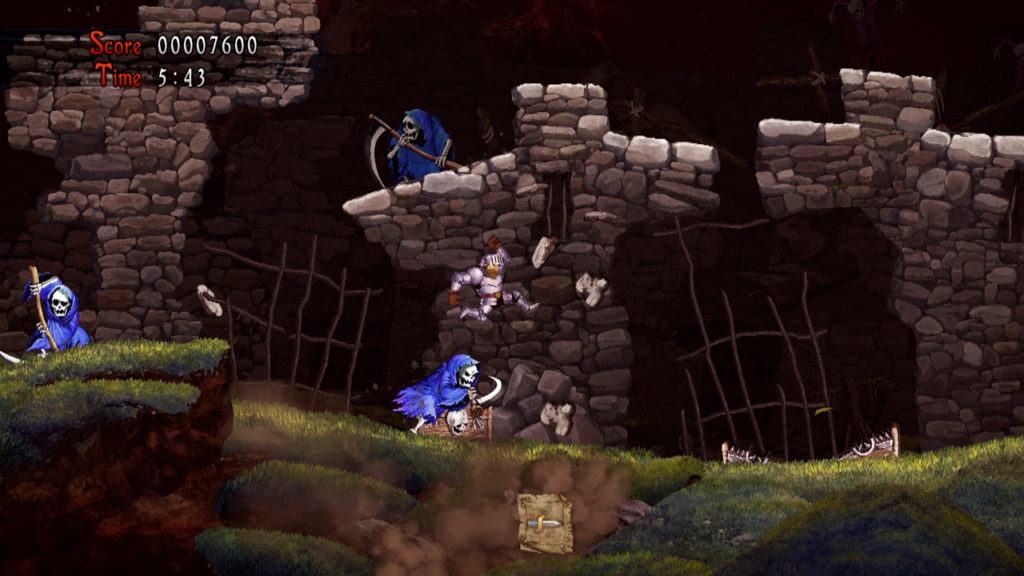 Capcom have done a solid job in that respect though. The uncompromising approach will certainly appeal to some, and the new visuals and additional features go to show that they weren’t content with simply applying a lick of paint. There’s reverence here, and the fact they’ve treated our nostalgia with respect is admirable – I just wish I could enjoy it a little more between the bouts of cursing and hair-tearing.

Ghosts 'N Goblins Resurrection's uncompromising approach will appeal to many, and the new visuals and additional features go a long way.