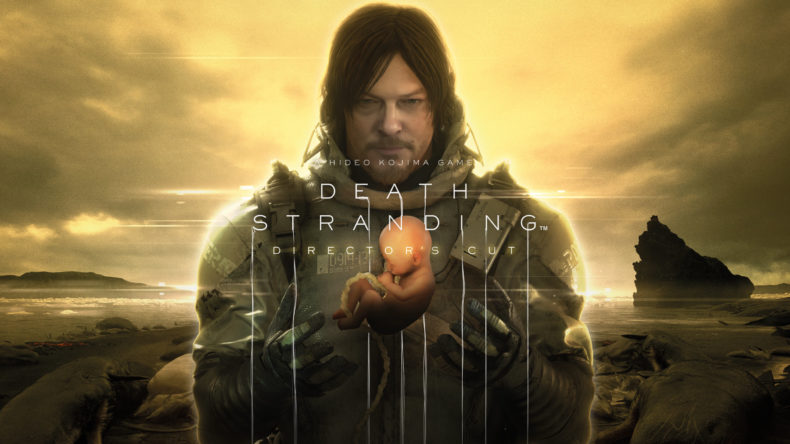 Despite it starting out as a PlayStation 4 exclusive, I’ve never played Death Stranding on one of Sony’s consoles. I didn’t play it at all until I reviewed the PC version. Now with the release of Death Stranding: Director’s Cut for PC, I’ve gone back to the grim, beautiful landscape of Kojima’s America to find it just as simultaneously stunning and confounding as ever.

There very much exists a divide between people who like this game and people who don’t. While that’s true of most releases to an extent, with Death Stranding it’s much more black and white. There’s almost no middle ground at all. People either love this game or they hate it – and it’s easy to see why. I’ve heard it called a glorified walking simulator, self-indulgent posturing, or a never-ending fetch quest. To a point, these aren’t particularly inaccurate. 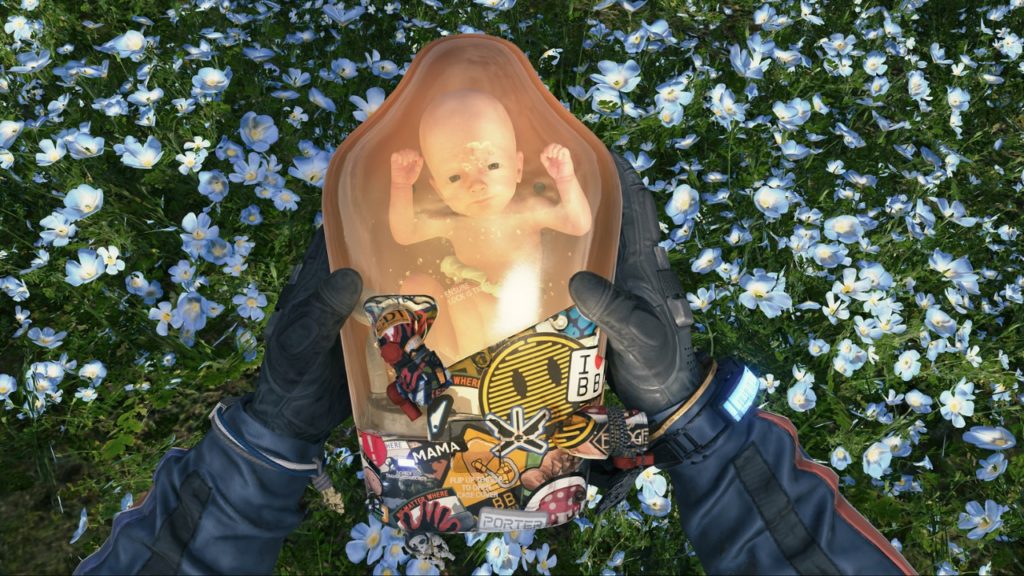 But Death Stranding is these things and more besides. Set in a post-apocalyptic America that looks very little like any part of the present day USA, Death Stranding is a game about reconnecting the scattered remnants of humanity after a temporal cataclysm. Chiral matter falls with the rain, ageing whatever it touches, and hostile outer-dimensional beings called BTs get washed into our reality. Protagonist Sam Porter Bridges (a Porter for the Bridges delivery company) is a special individual who can sense BTs, and even produces natural enzymes in his body that destroy them. It’s his job to travel the broken world, bringing people whatever they need to survive.

The main problem with Death Stranding is that, while the world building and premise are superb, Kojima’s writing is about as subtle and nuanced as a pool cue in the eye. Character names are weird, motivations and plot points are left hanging until the finale. As I said in my review of the PC release, it’s a game of stark contrasts. But its world is one I bought into wholeheartedly. 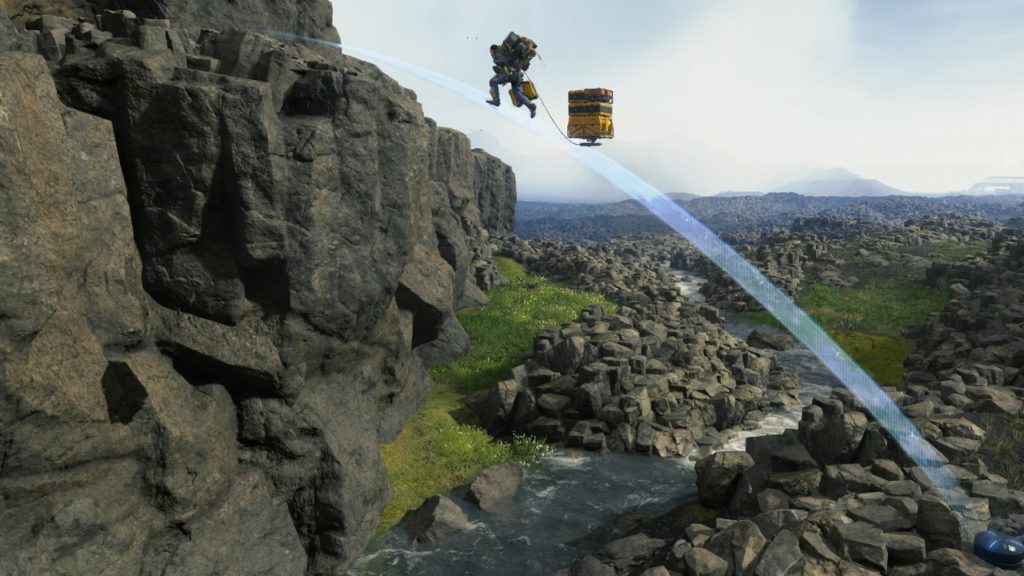 A bridge too far

So what has changed in the Director’s Cut? Quite a lot, actually. There’s more customisation now, with new suits for Sam, as well as stickers and materials to change the look of BB’s canister. But there are also new traversal tools. Death Stranding’s focus on realism initially put many people off: navigating harsh terrain with a heavily-laden Sam is as maddening as it is ultimately satisfying. It’s made easier by the inclusion of ladders, ropes, roads, zip-lines – all constructed by you or other players as you progress through the game.

In the Director’s Cut there are more options. You can create jump ramps for Sam’s vehicles, or cargo catapults to launch goods safely across canyons and mountains. Chiral Bridges offer an alternative to insanely long ladders or ziplines. The “Buddy Bot” plays a bigger role, as you can assign it to carry goods beside you or on its own. Hell, you can even assign it to carry Sam himself. Arguably, these additions trivialise a lot of the challenge, but you aren’t forced to use them. 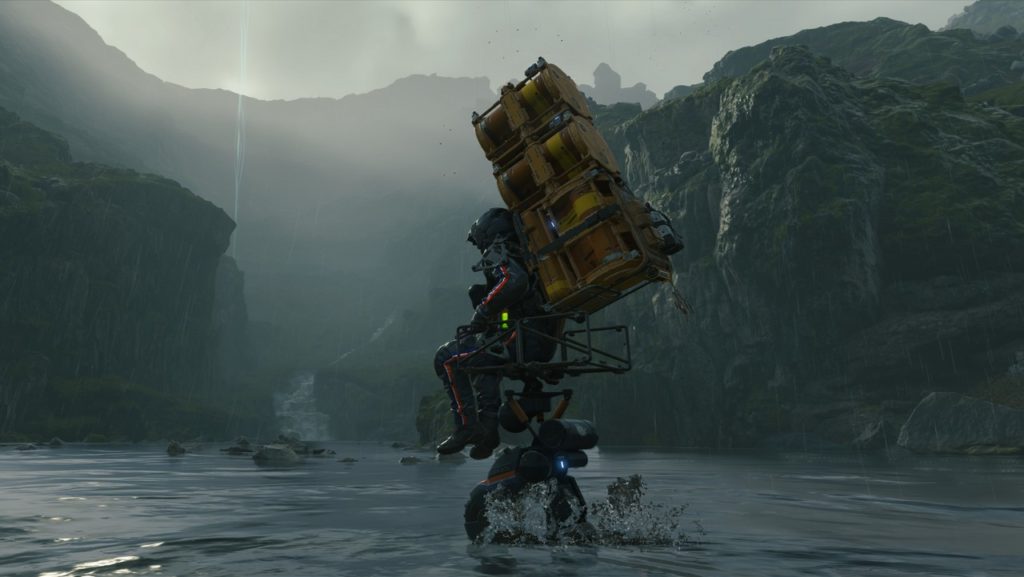 Likewise, additional guns and a firing range to test them out on help prepare you for the sparse combat. I say “sparse”, but much of the third act is spent fighting either BTs or loot-obsessed human MULEs. There are VR missions here too once you’ve activated the firing range, but they’re not particularly interesting. New story missions flesh out the world a little, and give you the chance to put your extensive combat training to good use.

Besides the inclusion of previous crossover content with games like Half Life, Portal and Cyberpunk 2077, the biggest addition here is the Fragile Circuit. I, for one, am not a fan. It’s essentially a time trial racing circuit you can construct just to waste time on. While any addition is going to appeal to someone, it seems bizarrely frivolous and at-odds with the rest of the established world. I suppose Sam needs to blow off steam, too, but there are probably ways that don’t drain valuable resources.

As for performance, well, Death Stranding: Director’s Cut is sublime on PC. Wonky physics notwithstanding (they’re present in every version), it looks phenomenal. It always did, even on PS4, but the environmental detail is spectacular. Cut scenes and character animations are some of the best I’ve ever seen. The whole experience hums with quality and confidence. 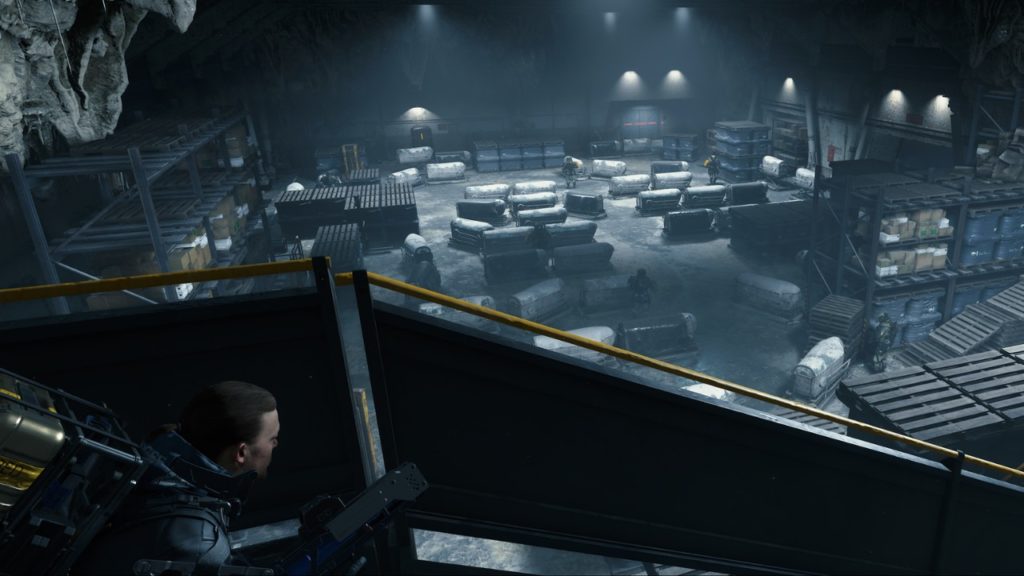 If you’re a PC gamer who loved Death Stranding before, I’d still recommend getting the Director’s Cut upgrade for the new content, gear and mechanics. I wouldn’t jump at it if you’ve played this version on PS5, though. In either case, you’ll get the best experience starting a fresh save – not least because the process to transfer your save is unintuitive at best.

Death Stranding was arguably one of the best or worst games of the last console generation. I pitched my tent in the former camp, and the Director’s Cut reaffirms my stance. Yes, some of it is maddening. Yes, the writing is sometimes like being hit by an oil tanker with the word EXPOSITION daubed on it in dull grey paint. But it’s also utterly unique. The Death Stranding Director’s Cut on PC is the best version available, performance-wise, and well worth it for fans and for those who missed it first time around.

The Death Stranding Director’s Cut on PC is well worth it for fans and for those who missed it first time around.