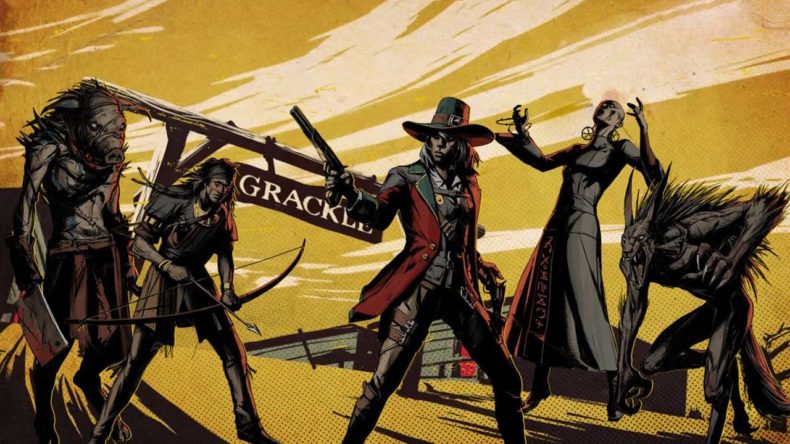 I’ve always been a fan of the Wild West as a setting for entertain media, especially games. It pitches somewhere between the Golden Age of Piracy and Viking Britain on my list of favourite places to kill people in. Partly this is down to the romanticism of the era, of course. But it’s also down to the fact that it only takes a gentle nudge to plough directly into Bizarro World. An era rife with lawlessness, disease and desperation, it’s not hard to imagine it being overrun by zombies, werewolves and mutated Pig-men, too. Welcome, then, to Weird West, a wander into a wild and wonderful wasteland of witches, werebeasts and weary-eyed warriors.

At surface level it’s an isometric action rpg set in a hellish reimagining of the American Old West. It’s a place where simple, mundane real-world horrors like plague and death-by-gunshot aren’t horrifying enough, and need to be propped up by cannibalistic demons, ancient curses and a really awkward camera. 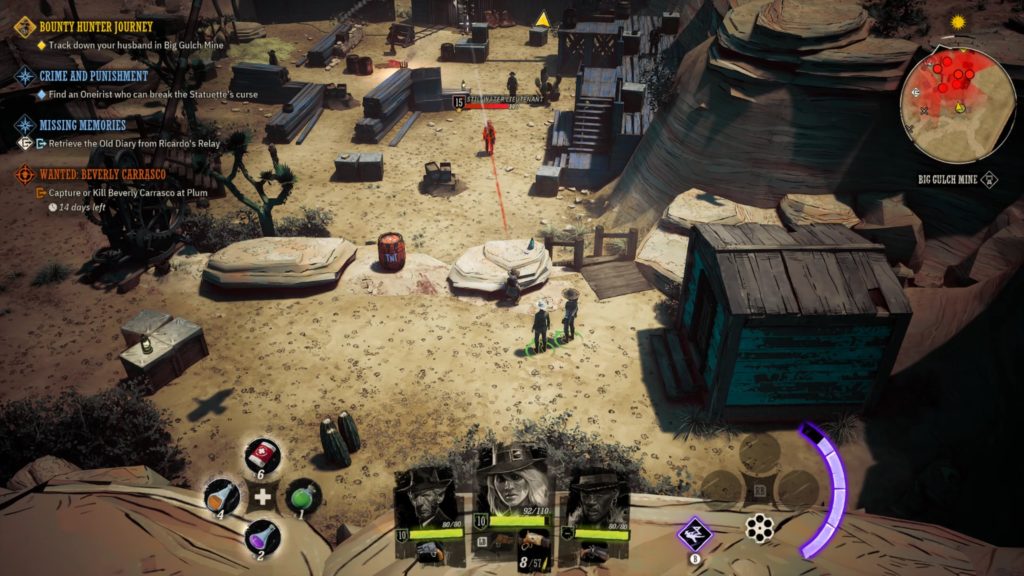 The central premise is that you are an entity known as the Passenger, a spirit that doesn’t even know it’s possessing people until it’s told it is. The campaign follows five protagonists possessed by the Passenger, each of whom you spend a few hours with before the story jumps you on to the next. The core mystery is the simple question of why it’s happening, but this main question blunders around dropping loads of little questions behind as it goes. At no point does any character who knows what’s going on give an adequate reason for not telling you. It’s all “You will learn in due time, puny mortal,” stuff and feels awkwardly forced at times.

For example we’re given a box with the number 21 on it and told not to open it, in a moment reminiscent of a subplot in Stephen King’s The Gunslinger. But four hours later I was still carrying it and had utterly forgotten I even had it. Weird West does this quite a lot.

The first character you find yourself inhabiting is Jane Bell, a former bounty hunter turned wife and mother. When your young son is gunned down by evil bastard Shelby Cross and your husband is taken, you set off on an odyssey to find him. But Weird West treats its narrative as an inconvenience a lot of the time. So you just leave little Timmy lying face down in the dirt and go dig up your guns before riding off in pursuit. He rarely comes up again either for the span of Jane’s story, as you travel from place to place helping or hindering NPCs in the hope that they’ll exposit something useful. 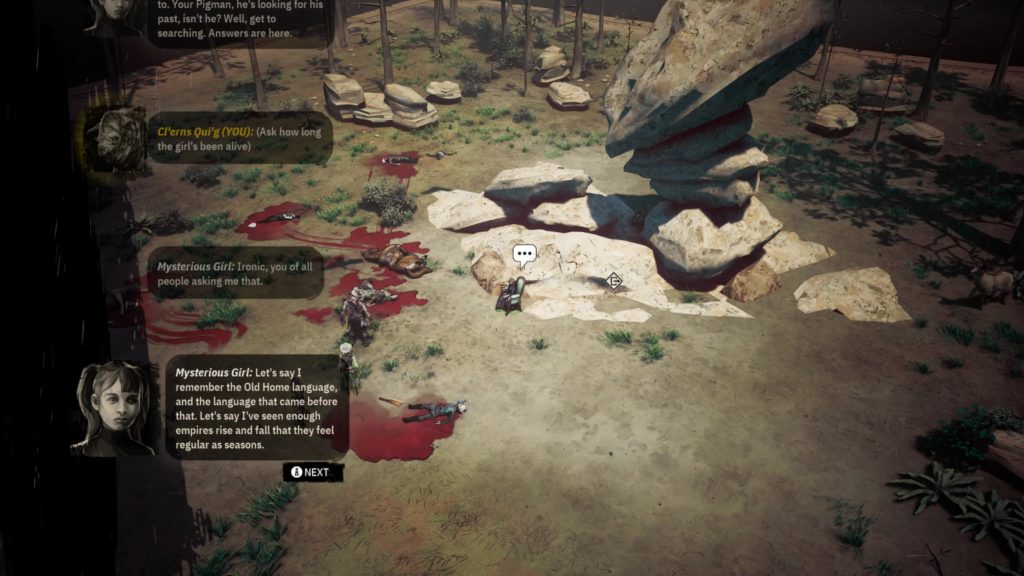 Before long I began to notice some bizarre contrasts in Weird West’s mechanics. You can, through the course of the story, recruit NPCs to fight alongside you. While they will comment on the world and your actions, they will also become invisible to enemies as long as you’re in stealth, to the point that enemies will literally push them out of the way while walking into them and not notice they’re there. Also, while the people of the world react to your morality and actions, they don’t do so with much consistency. You can have a bloody shootout in the middle of town, and the instant the last bad guy thuds to the mud everyone just reverts back to strolling around like nothing happened.

I was quite impressed by the organic nature of some of the questing, though. Should you, like me, succeed in freeing your husband but fail in avenging your son, Shelby Cross will remain alive in the world. When you then jump from Jane into the body of a confused Pig-man, Shelby Cross will appear as an optional bounty in one of the townships. I was also happy to find that experimentally riding to the home of Jane Bell and talking to her led to her becoming a constant companion of Mr Pig-man. She expressed relief when we killed Cross, and helpfully brought all her inventory and acquired skills with her. 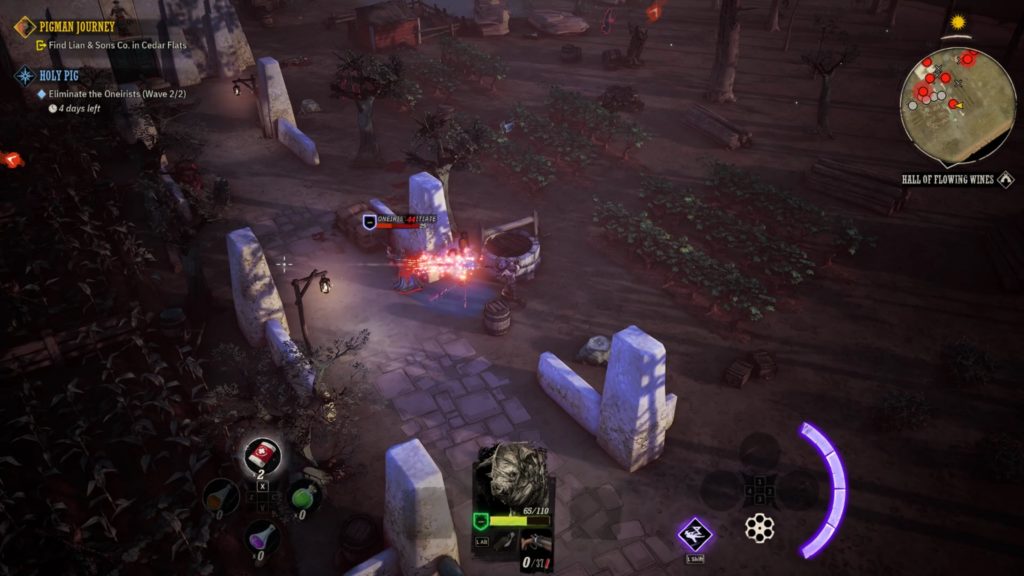 Even more impressive was that when I met any of the mysterious characters who seemed to know about the Passenger, they commented that Jane and Pig-man had found each other. It felt like payoff every time and added weight to my actions and decisions. And you make a lot of decisions. Not least which bounties or sidequests to tackle, but how to outfit your character and whether to meet a veiled threat with a wink and a “howdy” or three inches of white-hot lead in the chin dimple. It feels malleable. And crucially it felt like I missed a lot of stuff in that first act that made me want to play it again.

Unfortunately I never felt that the combat and I were sitting at the same campfire. No matter whether I used a controller or mouse and keyboard it always felt oversensitive and imprecise. And when your party members can suffer permadeath and all have the survival instincts of a lemming on the rim of a deep fat fryer it becomes maddening. They charge into gunfights like they’re in a contest to catch the most bullets in the curls of their hair. On controller you aim by holding the left trigger and moving the right stick. Often, though, your guns lack any real damage output. When a demonic cannibal beast shrugs off point-blank gunfire, fine. When a standard cowboy tanks bullets like the Terminator something is wrong.

Add to this some atrocious AI and you’ve a recipe for disaster stew. Enemies get stuck on scenery and each other. Sometimes they just walk around in circles. Although you can quicksave and quickload instantly, enemies won’t always be in the same place when you do so. This leads to some annoying instances where you’re working against not only appalling AI but also an element of random chance. 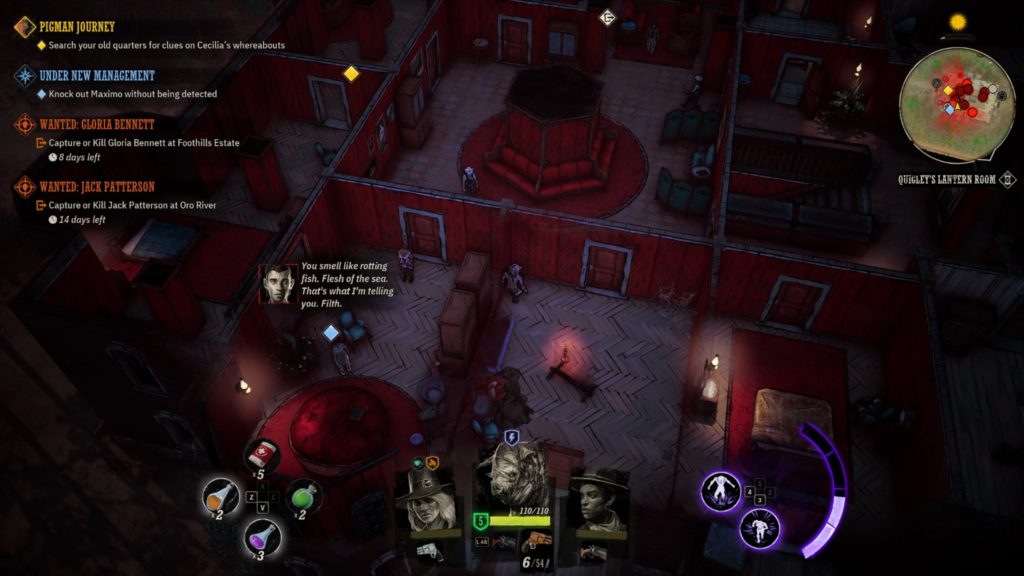 Combat just feels fiddly with a controller. Holding down the weapon select for a nanosecond too long opens the item wheel instead of changing gun. Arguably you should be using mouse and keyboard, but then Weird West is coming to consoles too, so go figure. Combat can be balanced somewhat using Perks which are shared by all your protagonists, and Abilities which are unlocked for the individual. The currencies for both are found hidden everywhere, so it’s worth exploring every container you see.

You can choose to bury the dead (or eat them, as two of the characters). Alternatively, you can dig up graves for loot. Weapons and body armour (non-cosmetic, sadly) are colour coded and have various attributes. Realistically though, anything that improves reload speed is essential. There’s also a bullet-time dodge move when you jump while aiming that would look cooler if the camera wasn’t always on the verge of storming out in tears.

It’s almost a shame that the action feels so at odds with the RPG elements. When you’re engaging in conversation with NPCs, making choices, allowing the narrative to unfold organically and take you by surprise, Weird West is fantastic. Completing bounties can even lead to vendettas against you. Also, it’s always a bit heartbreaking when someone you saved earlier comes to your aid in a gunfight and immediately gets their face reupholstered.

Exploring the world always feels rewarding though. You can travel between points of interest on an overworld map, where random events can occur. It could be a meeting with a mysterious benefactor, the scene of an attack, or an ambush. It happens enough to make each journey feel tense, but not so much that it becomes annoying.

Overall, your mileage with Weird West will vary dependant on how you deal with the combat. The RPG side of the game is superbly done. It’s a macabre adventure in a deeply creepy world, helped by stylised comic book visuals and some great sound design. If you can get to grips with the clunky combat, there’s plenty here to enjoy.

Despite some flaws that are too big to ignore, Weird West is an ambitious, intriguing, sometimes unique action-RPG set in a nightmarish world.