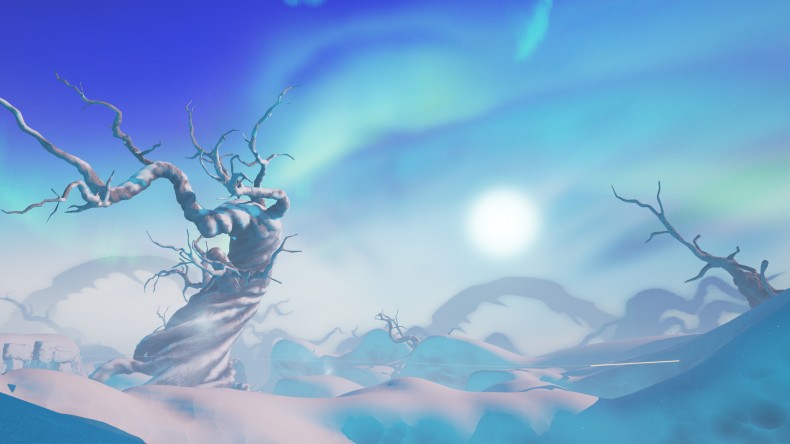 With a legacy of big budget triple-A games on their resume, such as Heavenly Sword and DmC: Devil May Cry, it was a bit of a surprise to see a small, experimental VR title sneak out on Steam by Ninja Theory. Moreover, it’s beautiful and fun, although its brevity is disappointing.

As it turns out, this surprise VR title was the result of an internal game jam at the Ninja Theory studios. A team of eight people, in a mere three months, created DEXED, a classic on-rails shooter, heavily inspired by Panzer Dragoon and Ikaruga. Using a “paint to target” mechanic, DEXED immerses you in four attractive environments through the HTC Vive, turns the motion controllers into fire and ice elemental weapons, and allows you to shoot enemies, rack up a multiplier and score huge amounts of points. It’s a brief experience, but DEXED does a superb job of highlighting its simple concept and compelling game-loop through its limited content. Enemies take the shape of balls of energy, either fire or ice, and shooting them with their opposing element destroys them. However, shoot them with the wrong element and you either “burn” your score or “freeze” it, deducting points or preventing your score from increasing respectively. Meanwhile, the on-rails limitation makes these misfires and your shooting prowess all the more crucial, as opportunities to grow your multiplier can be compromised or missed entirely. As such it’s part-puzzler, part-shooter, and ideal for repeated playthroughs to chase those high scores.

However, with DEXED only comprised of four base levels – a jungle, an underwater level, a fire level, and a snow level – it takes very little time to see all that’s on offer. Meanwhile, the final boss battle against a menacing octopus is a nice break from the energy encounters but also teases what could be if this was a full project. It’s fun, it’s immersive and it’s beautiful, but you’ll be left wanting more.

Each level take around five minutes to complete. With one controller you shoot ice crystals and the other you shoot fire bolts, and by holding the trigger and painting enemies of the opposing element, then releasing the trigger, you let out a flurry of homing projectiles. You can also cancel targets if you mark the wrong type, therefore avoiding the aforementioned burning or freezing of your score. Each level has three difficulty settings – Easy, Medium, and Hard – with corresponding leaderboards showing both Global and Friend rankings, providing a strong incentive to keep trying to improve your score. And indeed that’s its primary appeal; the simple shooting across strikingly beautiful environments is certainly a visual treat and fits VR splendidly, but it’s the score chasing that really keeps you engaged.

Of course with DEXED being an experimental title, it’s more a proof of concept than a fully-fledged experience and there’s plenty of room for improvement and growth. More enemy types sporting different elements and therefore requiring more weapon options as well as being new threats to your score, is certainly near the top of the list, but more levels and bosses certainly caps it. What’s here is great but it’s so very brief.

DEXED brings the classic on-rails shooter genre into a new dimension splendidly and does a superb job of teasing an intriguing concept for a full game.