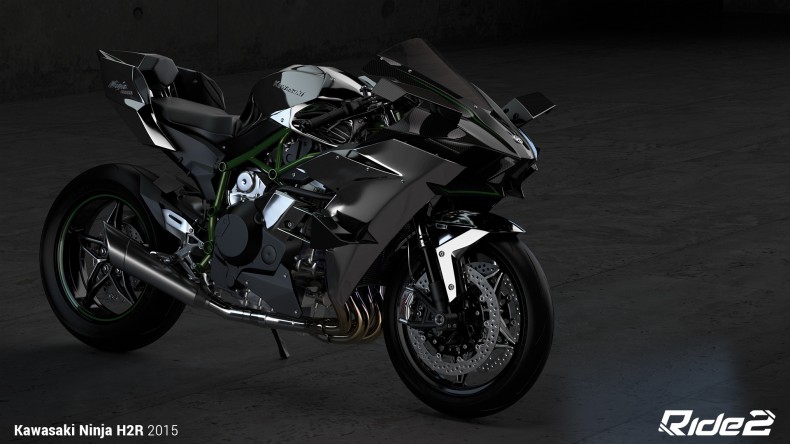 After Valentino Rossi: The Game brought the Moto GP games back into the limelight earlier this year, Milestone is having another crack at motorbike racing with its Ride series. Without any specific licence holding it back, Ride 2 offers an experience similar to Gran Turismo or Forza Motorsport, bringing together many forms of motorbike racing and letting you customise your rides as much as you like. Machines range from low-powered two-stroke bikes that are fun and easy to manage, or Supermoto dirt-bikes that slide easily around tight specialist tracks, all the way to the ridiculously powerful superbikes that you may have seen barreling around corners at 90 degree angles at Brands Hatch.

Each type of bike handles differently, and weight is a huge factor in getting your chosen bike around corners at a decent clip. Chicanes in particular are a real test as you shift your weight from one side of the bike to the other, but do it too slow and you’ll find yourself on the grass or, more painfully, slamming into a barrier. The physics are absolutely spot-on, just as they were in their Moto GP effort, and Ride 2 really feels like a love letter to motorbike fans. It also offers a good amount of customisation in terms of handling options, so that most players can get into the game, but unfortunately its difficulty options are a little unfriendly.

This unfriendliness comes in the form of some extraordinarily fast AI riders. Even on its easiest difficulty setting, the AI can be frustratingly hard to beat, thanks to their unrealistic speed through corners and a questionably-balanced class system. Like the Forza Motorsport series, Ride 2 bases its classes on a PP system, a number based on how much upgrading your bike has received. This is woefully handled however, as most bikes available for each class come in at well below the maximum PP allowed for each series in World Tour mode, and even upgrading will likely leave you underpowered and struggling to keep up with the leaders. This feels like a gross oversight, and not the only one, either.

For example, although Ride 2 takes some cues from its four-wheeled cousins like Gran Turismo, it unfortunately takes them from earlier in the series, meaning that its main career mode, World Tour, is a real slog. Progression is painfully slow, thanks to the available championships all requiring more power than you can afford in the early game, and the unfairly fast AI makes winning money to buy new bikes a real grind. This isn’t limited to the early game either, as new championships and special events remain locked behind reputation barriers (Ride 2’s form of XP) for far too long, so you’ll find yourself having to repeat events in order to get anywhere.

Luckily, reputation and money can be earned throughout all modes in the game, including quick races and multiplayer. Using bikes you’ve bought or won in World Tour, you can choose any of the 27 tracks (most including several configurations) and just get on with racing. The multiplayer is similarly free of barriers, even allowing use of ‘rental bikes’ to remain competitive, but you won’t earn any rewards if you use those. Personally I think that’s a little harsh, and possibly should offer a reduced reward rather than nothing at all. If you just want to race, though, it’s not an issue.

World Tour itself is a good idea, poorly executed. Season events are packed with options (most with those awkward PP requirements, sadly) and once you’ve completed a set number of races, the season will end and you’ll be able to take part in invitational events to earn larger pots of cash and reputation bonuses. Again, your participation depends entirely on the PP requirements of the bikes in your possession. As your reputation grows, you’ll find yourself rising in the world rider rankings, and getting high enough will allow you to challenge the team above you in the team rankings. The aim being to top both the rider and team rankings, World Tour is where the meat of the game lies, but only for those willing to grind through races to eventually get to the top.

Races themselves are a real showcase of the best and worst of Ride 2. The handling is fantastic and genuinely offers some of the best motorcycle riding in any game, able to be tailored to suit any player’s ability; the bikes all handle differently and are nicely modelled, filled with detail, and the tracks are incredibly varied and feature some of the best locations in the world.

On the flip side, however, the AI is very poor, sticking rigidly to the racing line, violently if necessary; the PP system often sees AI opponents powering into the distance despite the selected difficulty setting, taking corners at unreasonable speeds and making the game almost impenetrable to anyone but the most stubborn/patient players. Trackside detail is fairly average, not matching up to the power of the current consoles, with things like wet weather effects looking poor.

There is real potential in Ride 2, and with a little tweaking via patches, things like the impenetrable AI can be dialled back to make it more accessible, and PP requirements could be lowered to allow for a more streamlined World Tour mode. That being said, there really is no excuse for such poor AI in this age of consoles, and the boring, grinding progression takes out most of the fun, made worse by loading screens that appear at every menu change.

Ride 2 aims to be the two-wheeled equivalent of Gran Turismo or Forza Motorsport, but has learned nothing from the successes of either franchise over the last few years. It isn’t a bad game, but considering the quality of its Valentino Rossi game (including its fantastic career mode) it makes you wonder how Milestone got things so wrong.

Ride 2 aims to be the two-wheeled equivalent of Gran Turismo, but makes too many mistakes that leave it trailing behind the pack.