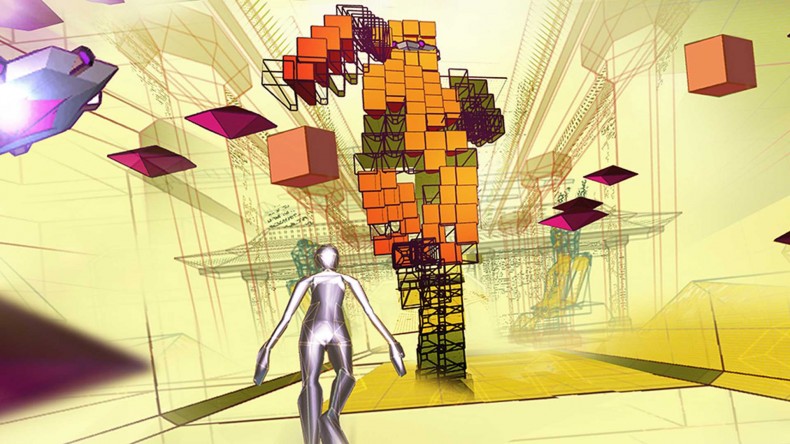 Making music with lasers in a digital coliseum of light and basslines is what Rez was all about; you flew through layered levels to make melodies as the 90s rave scene-inspired music blasted out of the speakers. It’s been fourteen years since it came out on the Dreamcast and the PlayStation 2, and at the time Rez was unlike anything else on the market, managing to fuse music with gaming in a way many have never been able to replicate. Rez Infinite is a remake with today’s technology elevating it beyond what it has ever been before; with 1080p resolution and 60fps and a humbly stunning new level, this is a must have for anyone who loves excellently executed video games.

In Rez Infinite, you assume the role of a hacker, or moreso a hacker’s avatar inside a futuristic computer network called Project K. Inside Project K, an AI called Eden is struggling to control the amount of data and knowledge flowing through its digital veins, so it’s your job to get in there and reboot her, killing any viruses or firewalls blocking your path to the core.

It’s a rail shooter and you have little control of what direction you go in, but you can move your avatar around the screen. Each of the five main areas is made up of ten layers filled with things to shoot and dodge, providing a melody to the magnificent soundtrack every time you blast your lasers into the various viruses. You can have up to eight shots at a time, and by locking on to the different targets you’ll fire a flurry of lasers the moment you let go of the lock mechanic. Each successful hit adds a note to the music and melodies begin to fill the air, working perfectly with the beats in the background. On the title screen, it advises you to either wear headphones or utilise surround sound (Rez Infinite supports full 7.1 surround sound) – I’d strongly suggest that you do. There are plenty of moments in Rez Infinite where you’ll have a lot to deal with, and things can get frantic fast. At the bottom two corners of your screen, you have an evolution bar and an overdrive bar. By collecting red orbs, you’ll build up power of epic proportions; when you do have loads of resistance from the enemy, unleashing overdrive will shoot everything on the screen for a limited time, and can be vital if you start to feel overwhelmed. On the tenth layer of each area, you’ll come up against a boss, each different from the last and giving you a different way to attack it, and overdrive in these circumstances can cause significant damage when utilised at the right time.

The evolution bar is built by collecting blue orbs and the more you collect, the more you start to resemble a human as opposed to the white sphere you’ll devolve into if you keep taking damage. The game is quite challenging the further you go, and for me it was area 3 that had me restarting a few times. One of the negatives of Rez Infinite is having to restart an area if you die, no matter how far along you get. It took me four or five attempts to beat that boss, and getting all the way along to the tenth layer only to be sent right back to the beginning was very annoying. Area X is a brand new level and my God, it’s an absolute belter. Whereas the original game base is constricted by a preordained path and digital, Matrix-like visuals, Area X is much freer and brighter. The marker in the middle shows you where enemies are (highlighted by a purple blemish) and where you need to go (a blue blemish), and you can press R1 to fly at great speed. Shooting enemies in Area X is even better than in the five main areas, providing dense explosions of light and pixels that fill the screen, with an equally amazing piece of music which you help to create. It’s a shame there’s not even more new stuff here, but Area X does a great job of seeing where the future of the series could end up going if the demand for it is there.

In VR you can use either the controller to lock-on as usual, or the move wand to either point at the enemies and fire. You can also just aim at them with your head and hold a button (or trigger) to lock on. It’s exactly as engrossing and wonderful as you’d imagine, and while it’s too early to tell (the years of history making Rez one of those games we always love), it could well be the definitive way to play. There are comfort options for VR-virgins (or VRgins, if you like), but with the training wheels off and a good pair of headphones, Rez gives a synesthesia like never before. Incredible.

Rez Infinite is a great collection of old and new, giving you the same great original with better resolution and sharper visuals. There’s a score attack mode unlocked by completing the different areas, but it’s Area X that makes it for me. The music is amazing, the fluidity of movement is stunning and playing every area feels massively differently from the last. I can’t praise this iteration of Rez enough, and even over a decade since its release, Tetsuya Mizuguchi still manages to evolve the core elements that made it great in the first place.

Note: The paragraph on VR was added by Adam.

Could do with more new content for returning fans

With its 1080p resolution and crisper visuals, you’ll find very little reason to not pick this up and play. This is the best that Rez has ever been.