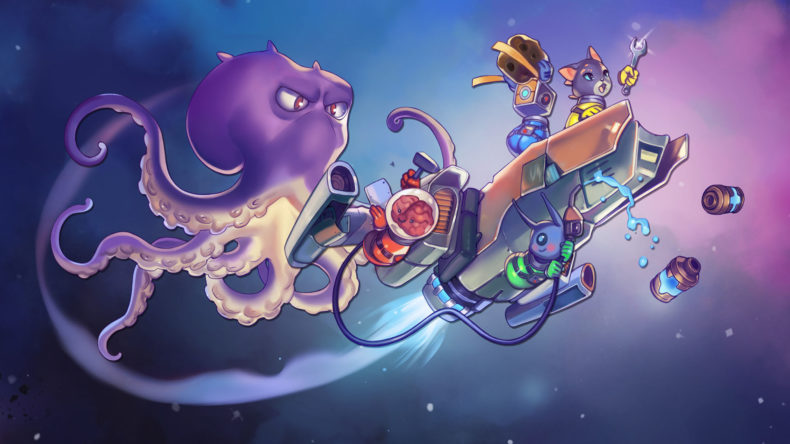 There isn’t much I enjoy more than spending an evening playing co-op video games with my partner. Whether it’s slashing through armies of demons in Diablo or building a base for our dinosaurs in ARK, I’m always happy to grab a controller and team up for a big session. Sometimes I’d rather jump into a more arcadey game than those big ole timesinks, and after fully exhausting Overcooked! we were in need of something else to play. Fueled Up came along to answer our prayers, swapping cooking with spaceship recovery.

The world of Fueled Up is trying its best to cope with a crisis. A massive octopus has appeared in space and is destroying spaceships left and right. In most games your goal would be to take out this tentacled menace, but that’s a job for someone else. You and up to three friends are a spaceship recovery team, tasked with fixing up these abandoned vessels and getting them back to base without getting obliterated by the eight legged villain.

This is easier said than done, because a lot can go wrong on a spaceship it turns out. Each stage of Fueled Up takes place on a single screen, and has at minimum an engine or two and fuel to pour inside them. As a team you’ll need to make sure you fill up the engine with enough fuel to keep it running while repairing holes that appear on the floor and managing other issues. This starts out fairly straightforward, but quickly turns into a bit of a nightmare. 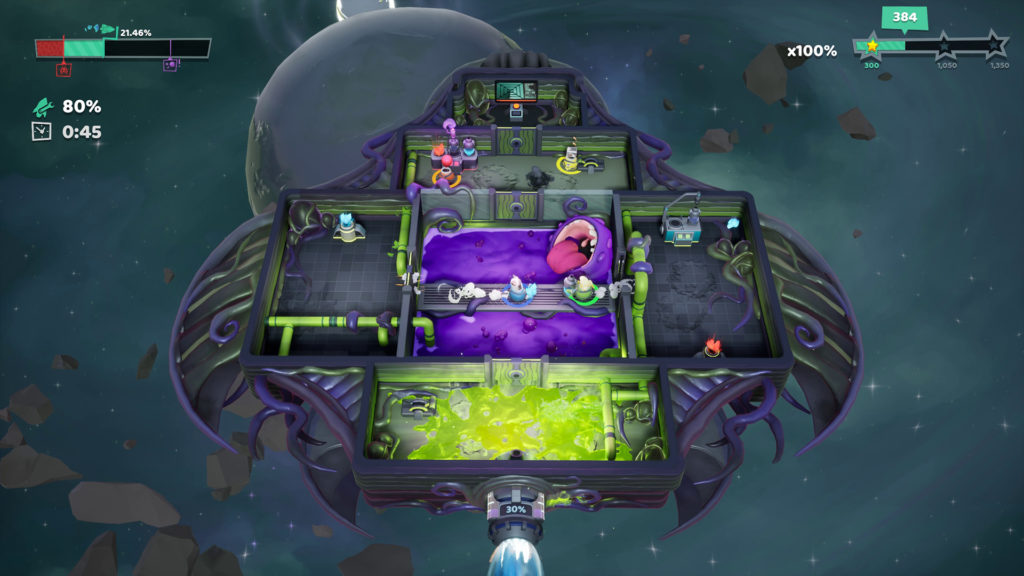 A couple of levels in airlocks are added to the game, which require batteries changing regularly or they’ll open up and suck you into space (leaving your team to deal with the chaos alone while they wait for you to respawn). Then the next level puts a button on the floor that you’ll need to stand on to open certain doors. Before you know it there are conveyor belts you’ll need to pass components along, engines that can catch fire and floors made of fungus that vanish beneath your feet to deal with.

Whereas games like Overcooked! manage to add chaotic elements like this while still making it obvious how to best approach a level, Fueled Up is often just overly confusing. After we beat the first world it’d take us a couple of attempts to even begin to understand every single new stage, and alongside some slightly obtuse level layouts it sometimes made the game more frustrating than fun.

Speaking of frustration, I need to talk about doors. It is rarely obvious where a doorway between rooms is located in Fueled Up, and they’re always so narrow that in the heat of the moment you’ll get stuck on them constantly. Little chunks of meteor often fall into the ship in later levels, and you’ll get stuck on them constantly too. This can get infuriating pretty quickly, especially when these pesky rocks explode and leave goo that slows you down all over the ship. 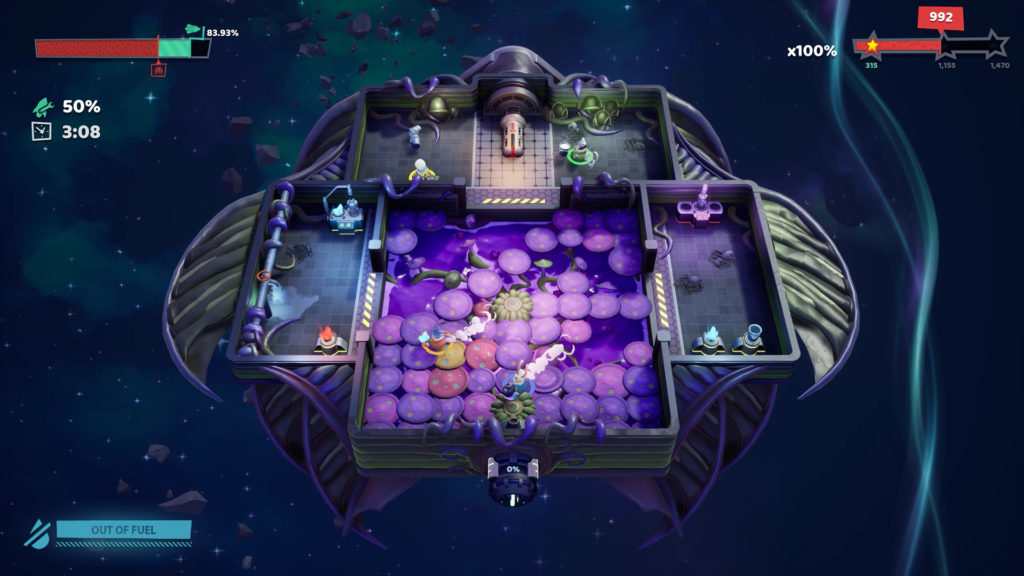 Despite these issues we still had some fun times playing Fueled Up, that is until it committed one of the biggest sins in gaming. Locking off later levels until you’ve earned enough stars on previous ones. Each level gives you up to three stars based on how well you manage the mayhem, and by the end of the game you’ll need to be getting all three every time to progress to the next stage. It’s a miserable way to artificially extend the length of the game, and caused us to take a break from playing on multiple occasions.

It’s a real shame that Fueled Up has these issues, because it does a lot right. The accessibility options are fantastic, and actively made the game easier to play for my partner. His joint issues mean that button mashing can be pretty painful, so switching the input for repairing holes to holding down the button instead was a huge help. Alongside this there are also lots of different visual options to make outlines thicker and easier to see, as well as colour blind options for those who need them.

Fueled Up is a fun chaotic co-op game that has a few issues that hold it back from being great. When a level clicks and you’re shouting instructions to each other (along with the occasional expletive) it has that magic feeling only co-op games can produce, but the artificial lengthening and awkward level layouts spoil this more often than not. Fueled Up might provide you with a few hours of entertainment with your buddies, but there simply better options in the genre.

Fueled Up is a fun co-op game to play with friends, but the artificial lengthening and confusing levels really make it hard to recommend over its peers.