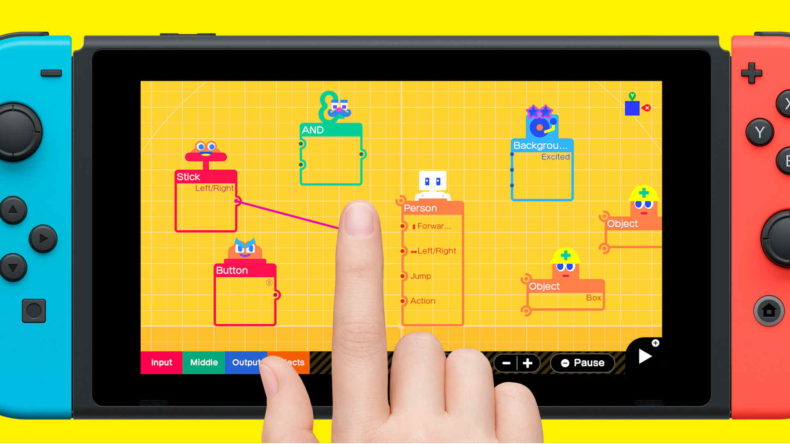 Game Builder Garage is going to inspire some truly fantastic creations. I was less than an hour into the experience when I first said “wow” out loud. It was during the first level tutorial, and I was almost aghast at the possibilities. That early creation is called “Tag Showdown” and it’s fairly rudimentary. But it’s the tools; the creation suite that had my jaw on the floor. They’ve thought of everything. No, seriously… everything. From the simplest of ideas such as changing the colours of characters in a two player mode so it’s not confusing. And then all the way to changing a respawn, or retry timer to balance things out. It’s remarkable.

It also seriously hurts my head. Because while I’ve played games for forty years, I rarely think too deeply about how they’re made. And for the record, I’m fairly certain they aren’t made using tools like Game Builder Garage. That said, it feels like lessons have been learned for good and for bad from the likes of Super Mario Maker 2, here.

First of all, Game Builder Garage’s controls have been thought about a lot. You can tell feedback was listened to, not entirely, but partially. The game is controllable in handheld mode with touch controls, of course. But you can play it comfortably with a controller, too, or even a compatible mouse via USB, which is excellent. Rather than restrict people with certain ideas or mechanics, the “lessons” part is about giving you the tools to do what you will. The lessons hold your hand, sometimes too much, and there’s an assumption that you’ve not played much, or are part of the younger Nintendo audience. But these lessons serve a purpose: they create the “wow” moments. As you slowly understand the ideas behind how things work, you start to think about what you could do. 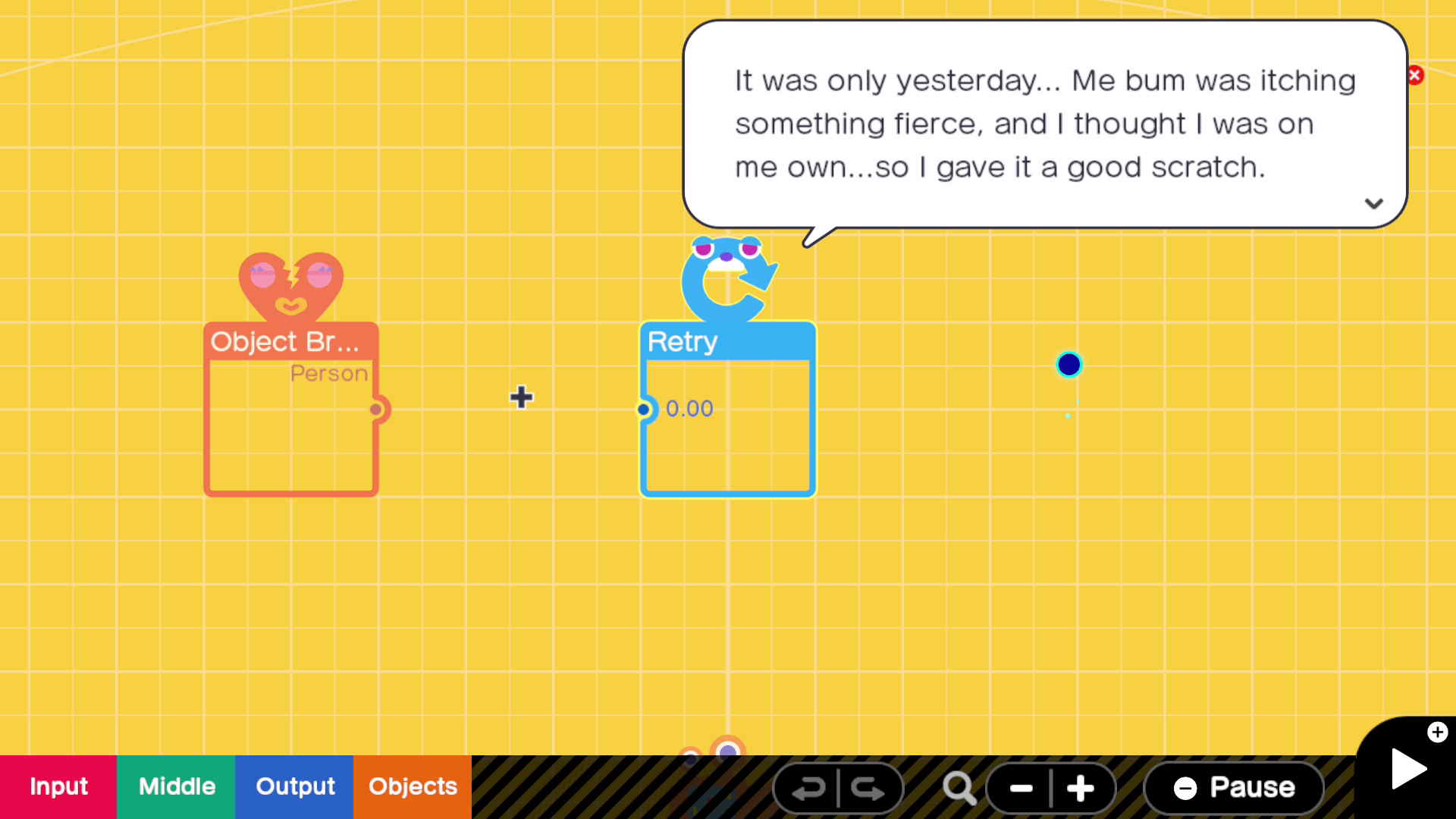 There’s a slight cheekiness to the whole thing as well. There are several moments in the early lessons that feel as though they’re poking fun at the whole of game development. This title knows what it is, and isn’t pretending to be anything else. It does feel like Nintendo’s version of Dreams, for better or worse. And that’s because the level design tools themselves feel so quintessentially Nintendo. Are you going to make a full 3D horror version of Dead Space here? Probably not, though I suspect someone will manage it.

Game Builder Garage feels more aimed at the audience it’s available for. It will inspire you to make platformers, Mario Kart-alikes, and interestingly, allows you to make 3D games. Of course none will ever be as good as you’d hope, but it’s the trying that’s the fun, right?

The thing is, it doesn’t feel intended to make these grand pieces of art like Dreams does. The early lessons are very much function over fashion. The inspiration comes from understanding what you can do, and not being shown something and told to copy it. There’s full support for the Switch’s functionality, meaning you can create a motion controlled game if you want. But also if you want to just create a game of two-player tag, that’s also fine. 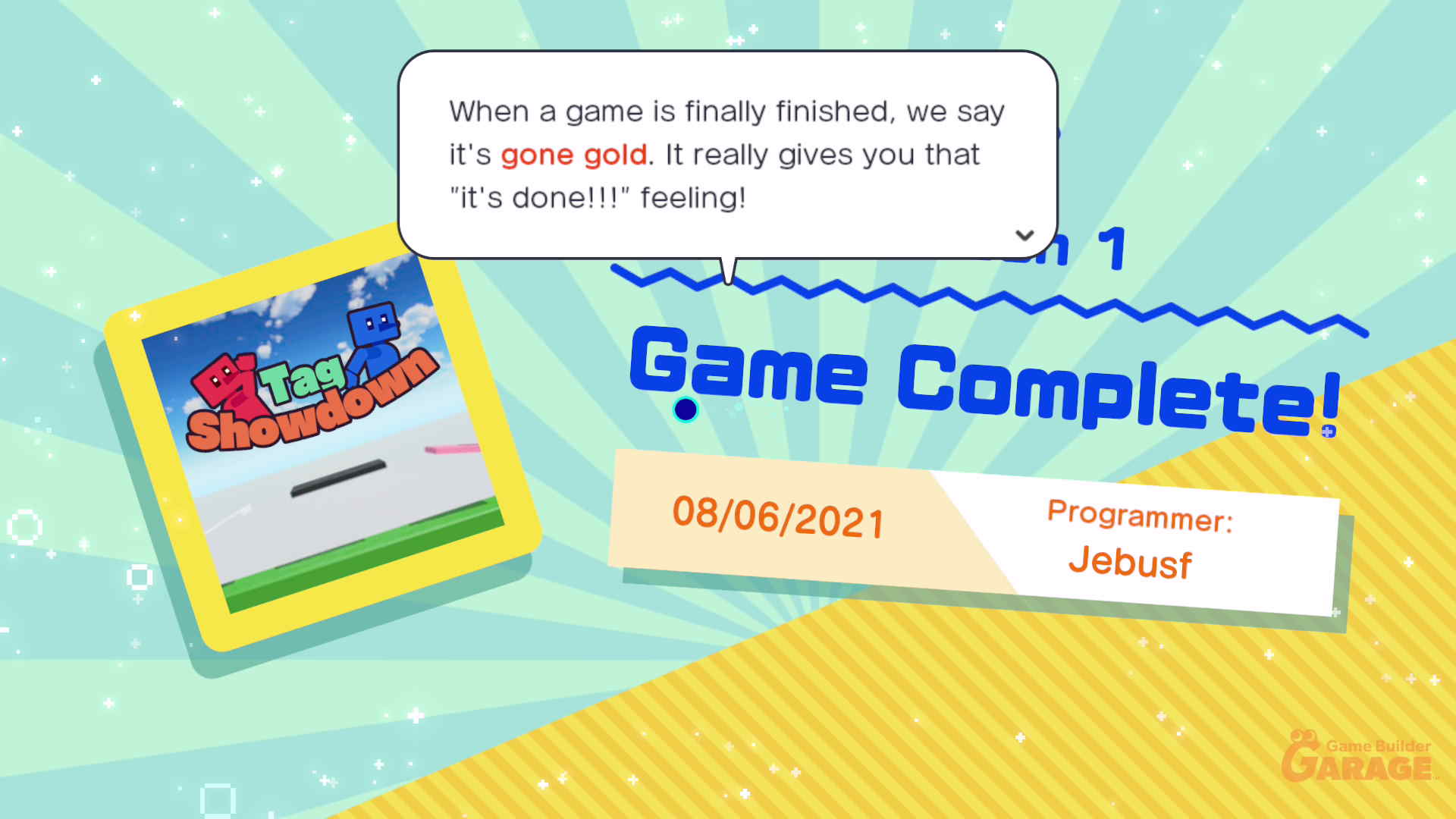 While you’re learning about how to “programme” your games, there are also little puzzles, too. These are called checkpoints, and are very short slices of fun. They’re designed to almost check in: “hey, remember how to do that thing, right?”. From changing the properties of a block to destructible, or simply moving the “play area” so the game works, they are smart moments that reinforce the learning. They may be a simple diversion, but again, it’s not about forcing you to do anything, and after the first game is complete you can just go nuts if you want to.

Tools for the job

The tools are complicated at first, but that’s mostly due to the “Nintendo effect”. Instead of simple names, everything is cutesy and has forced charm. Nodons are what every part of every game is called. There’s more: middle, objects, output, input: these are all terms you may think of in one way, but will need to understand them on Nintendo’s terms here. Every item, be it floor, playable characters, ramps, controls, is customisable. You’ll have to tell the game that you want the “player box” to be controlled with the left stick. Oh, and that the left stick moves them left and right. If it’s in 3D? Up and down needs including. They don’t jump on their own: you’ll need to tell the game which button is jump and “connect” it up. 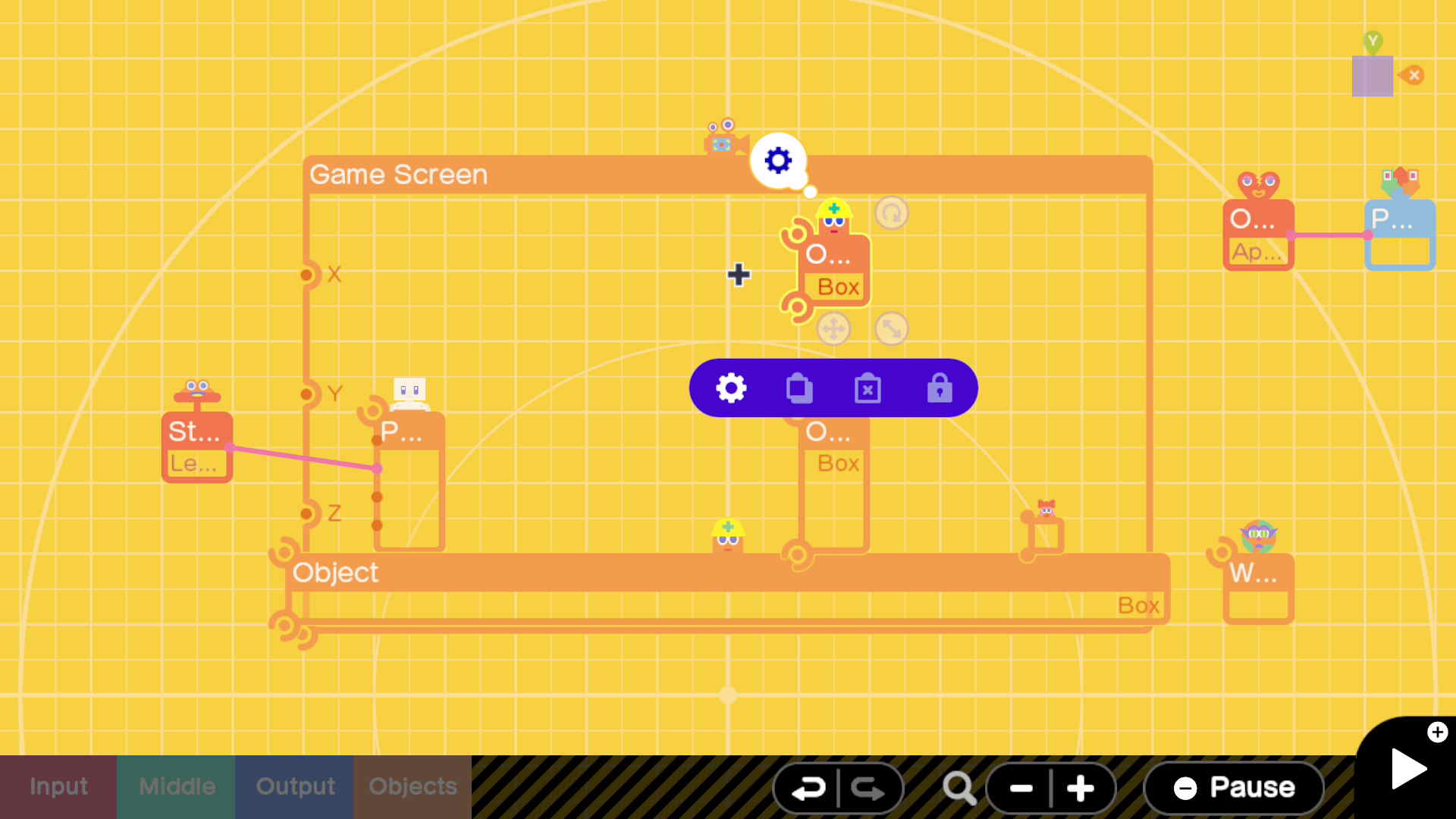 It’s as complex as you want it to be, really. A box can throw out balls, but what colour balls? What speed do you want them to come out at? What size do you want the balls to be? You can control any or none of this. Creating a 2D playspace and want more real estate? Just drag the “game screen” to be bigger, or maybe shrink the player down. These are all things that you’re taught in the first hour of the game, and it’s remarkable how much it sticks with you.

Another lesson most people would hope Nintendo took from Super Mario Maker 2 is how to manage the community. Sadly, nothing has been learned, and in fact feedback has been ignored. It feels almost spiteful how Game Builder Garage doesn’t allow for what would otherwise, I’m sure, be a huge, burgeoning community. There are two options available: local or online sharing. The former is obviously for friends and family to share. The latter… is sadly exactly the same. 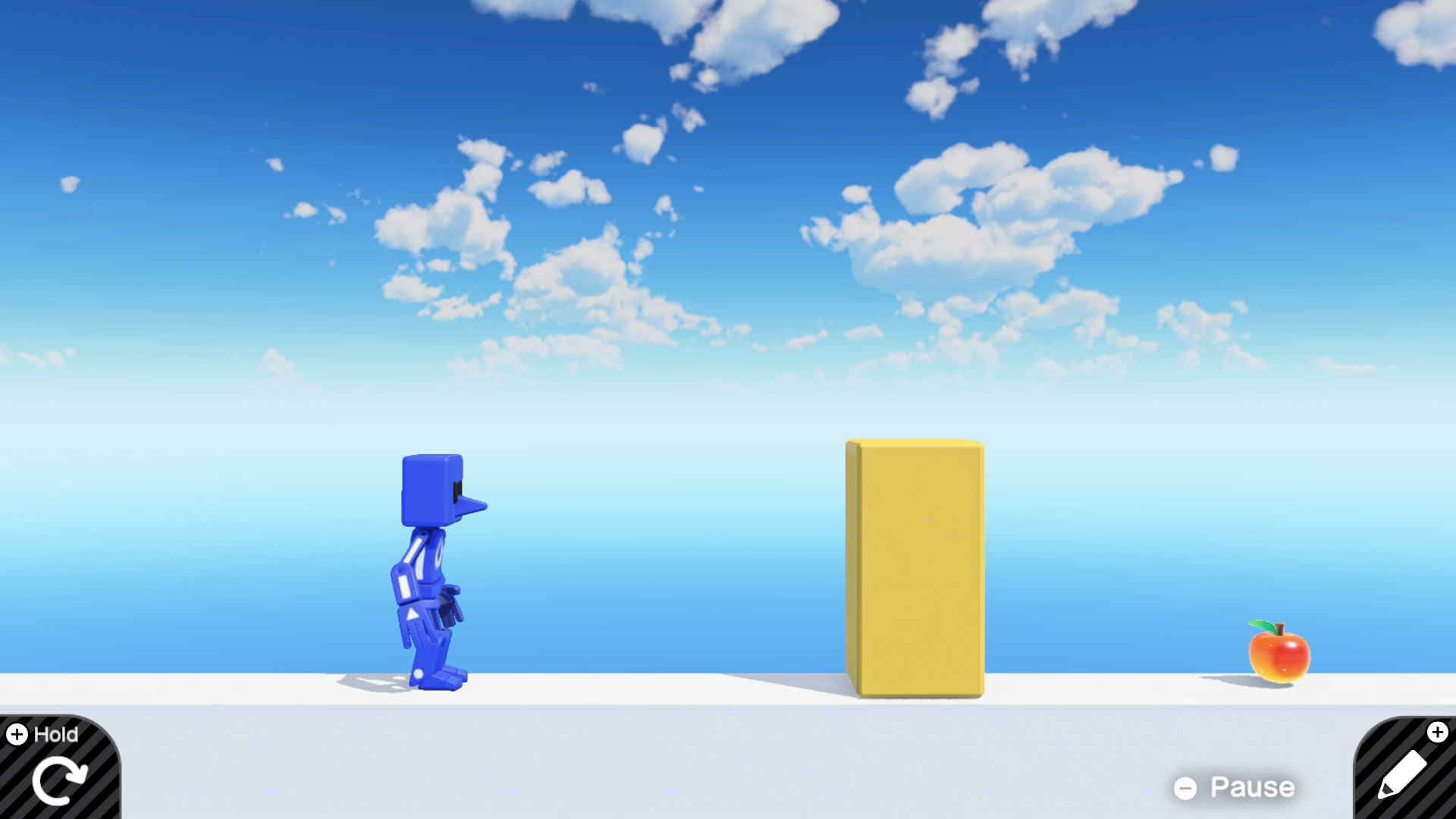 You can share online, but only if you manually drop a code for your level or creator. This means there’s zero curation, and the community work has been left to the players. The game even says you can report levels if you find things offensive, but there’s no “market” or way of seeing the best levels out there. This feels like a missed opportunity: it’d be great to have creators featured, or specific levels that are popular showcased. Alas, right now this isn’t the case and it’s a shame. Especially given that levels can be edited once downloaded, removing a valuable learning tool. You can’t learn from the best if you never find them.

Game Builder Garage is typically brilliant Nintendo, but it’s also frustrating when it comes to the online. The tools here are such that time will tell if it truly has legs. Without months of testing and a list of “best” levels to test out, I’m stuck here with my own creations and just a mind full of possibilities. The greatest compliment I can give, however, is that I genuinely had moments where I thought “this is the one that finally gets me”.

There’s been titles before, like LittleBigPlanet or Dreams that I respected and admired. But I always know that I’ll be a player, not a maker. The issue here is that if you’re not a maker, there’s limited fun based on the built-in lessons and challenges. The broader issue is that if you’re not getting online with communities, there’s no way for you to find other people’s creations. What you’re left with is a brilliant creation toolset full of the charm and wit you’d expect, but with no way to share it other than your Twitter feed. That said, I spent hours creating a football game with my son, and I don’t think I can say that about any other game.

No community or curation
Requires a lot of learning

Game Builder Garage is typically brilliant Nintendo, offering a way of creating levels that is only stymied by the lack of online community and curation options.