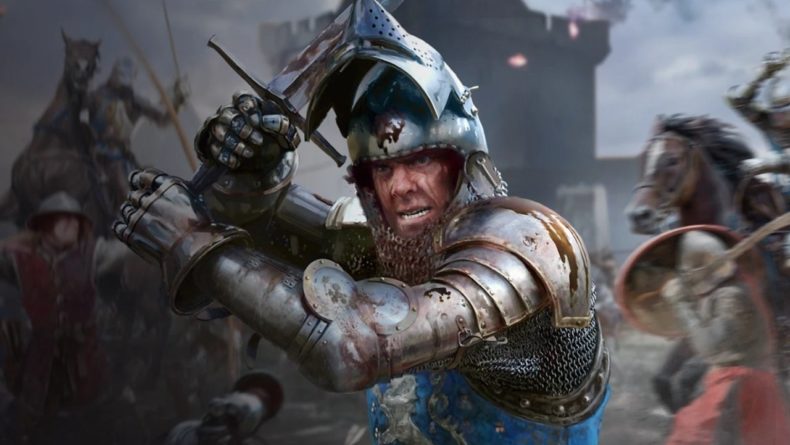 If Chivalry 2 has taught me anything, it’s that there are multiple ways to kill a man using a chicken. I’ve thrown them, I’ve swung them. I’ve stuck them on a catapult and hurled them at unsuspecting archers who probably placed “getting hit in the face by a 40-mile-an-hour chicken” pretty low on the list of things they expected out of a Tuesday. My flailing, ironclad arse sailing over the walls immediately after was probably even lower.

Ostensibly, Chivalry 2 is about the noble art of medieval war. Two armies meeting in mortal conflict at a predetermined location to fight for honour. Lines are drawn, the fate of nations hang in the balance. Stirring speeches are growled by battle-hardened commanders. Steel clashes, limbs fly, blood seeps into the churned ground. Overhead, the crows dance in dark-feathered spirals. On paper, it’s the kind of multiplayer experience many gamers dream of. In practice it is, too – only with more swearing and mildly hilarious ragdoll physics. 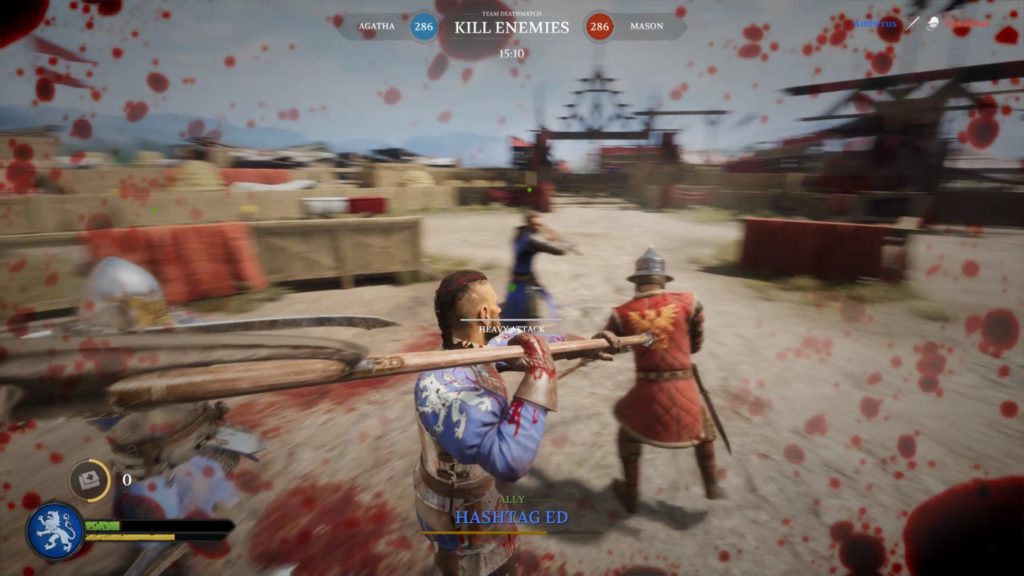 The story that frames the action tells the tale of two warring nations. The red-caped Masons and the blue-daubed Agathians are locked in a perpetual war of attrition. As a result, sieges, pitched battles, daring prison breaks and outright thefts all feature as mission types. There are multiple maps, and you’re randomly assigned a side, which keeps things fresh. The action can be third- or first-person and is always brutally cathartic.

Regardless of side, you have four classes to choose from. The long-range Archer, tough-as-nails Vanguard, wily Footman, and stoic Knight. It’s absolutely worth trying them all out, or even switching between them as the situation requires. The Archer is perhaps the easiest for scoring kills, though be prepared to be utterly hated by all. The Vanguard and Knight are great tanks, while the Footman’s long weapons can keep the enemy at bay. There are three subclasses for each, such as the shield-bearing Guardian in the Knight path. 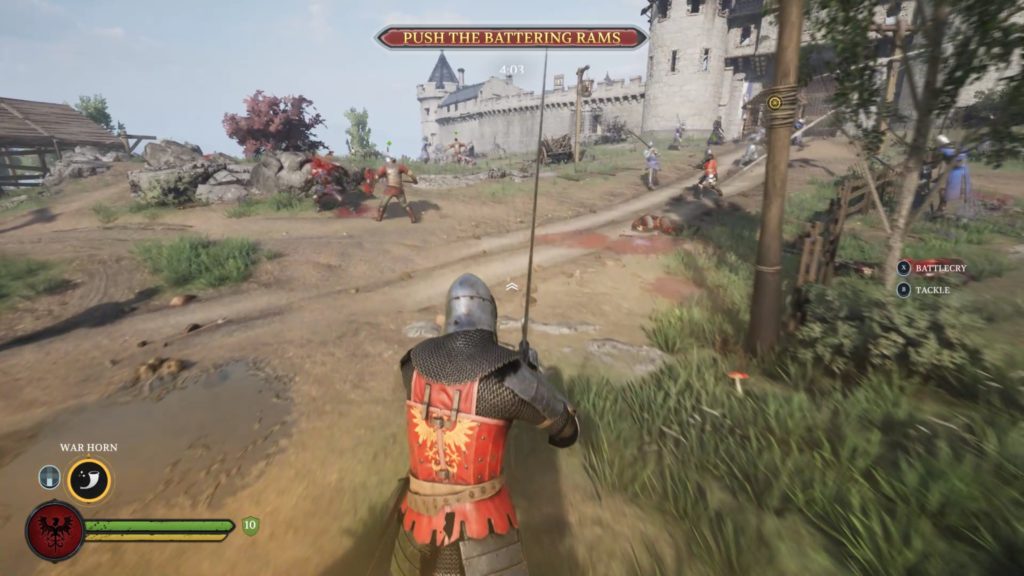 Each class and subclass has a unique ability. For example, the Archer can drop a lit brazier and ignite their arrows. The Vanguard can throw a pot of burning oil. The Knight can blow a war-horn to heal allies and the Guardian can plant a banner for group buffs. As a footman, you can throw bandage packs to save lives or drop a spike trap. These skills all synergise well in the heat of battle, allowing you to work together with minimum direct communication. An emote wheel allows you to issue commands, say thanks, or insult the enemy, among many other things.

You can choose between several server types. There are Duels, Free For All playlists, and either 40- or 64-player lobbies. Once you’re in, maps and mission types rotate randomly. It’s quite refreshing to not know exactly what’s coming each time. By far, my favourite missions are the huge pitched battles. The objective here is to whittle the enemy army down to nothing, but the atmosphere is incredibly strong.

Have fun storming the castle

Glancing around the battlefield to see little clusters of fighters never gets old. Limbs and corpses litter the grass. Rain pours from the sky. The whole world is fire and steel and screams and horns. It’s really quite a spectacle. You’ll get more out of it on PC or new-gen consoles than other platforms, though, as it’s quite a demanding game. 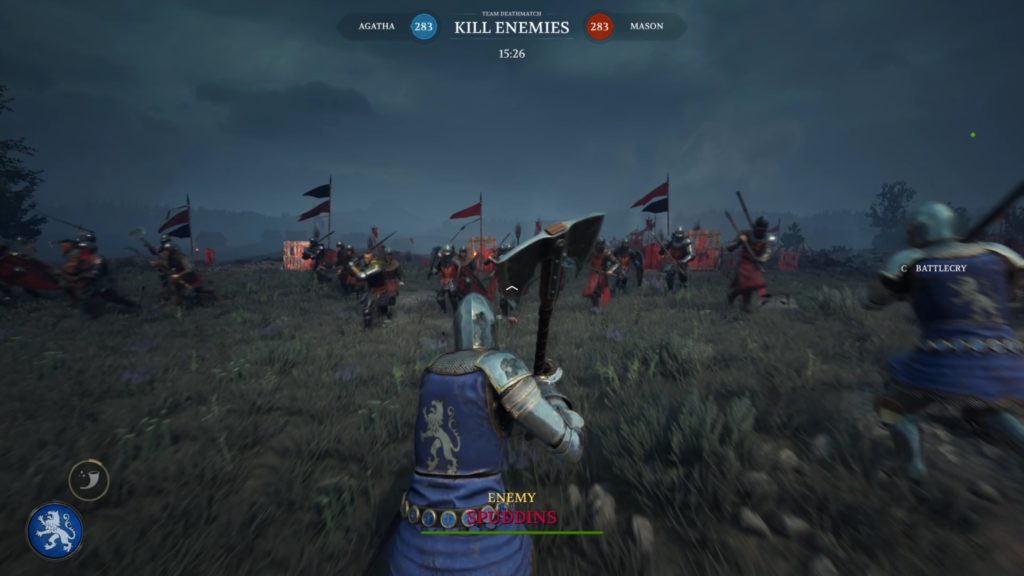 It gets a little more complicated and, dare I say, imbalanced, when you load into an objective-based map. These will see you placed on either side of a multi-phase campaign such as a siege or prison break. In the former you will either have to walk the siege towers to the castle or block their progress. Once there, you’ll scale the walls, take the battlements, the town square, and ultimately storm the keep. You may man the battering ram, or need to burn down the enemy encampments. Each of these small, timed missions can mean the end of a campaign if you fail. The trouble is, they feel pretty skewed at present.

For example, I played for several hours solid in one particular session. Despite remaining in the same lobby with the same players, I never once succeeded in withstanding an assault, and never once failed when taking part in the assault itself. It seems way easier to be part the offensive force.

That said, it’s not all hacking and slashing. At a glance, it may seem that way, but there’s a lot more to it. It’s all fun and games until you see another player, or two, bearing down on you. At this point the surprisingly deep combat comes into play. You can parry and riposte, feint, dodge, or kick to break a defensive stance. Each weapon can be dragged in a wide arc, and each of the three attacks can be made stronger by holding the button. You can swing, stab, and chop, or even throw your weapon at the enemy if they try to run away. A comprehensive tutorial will show you the ropes, but the best way to learn is getting stuck in. 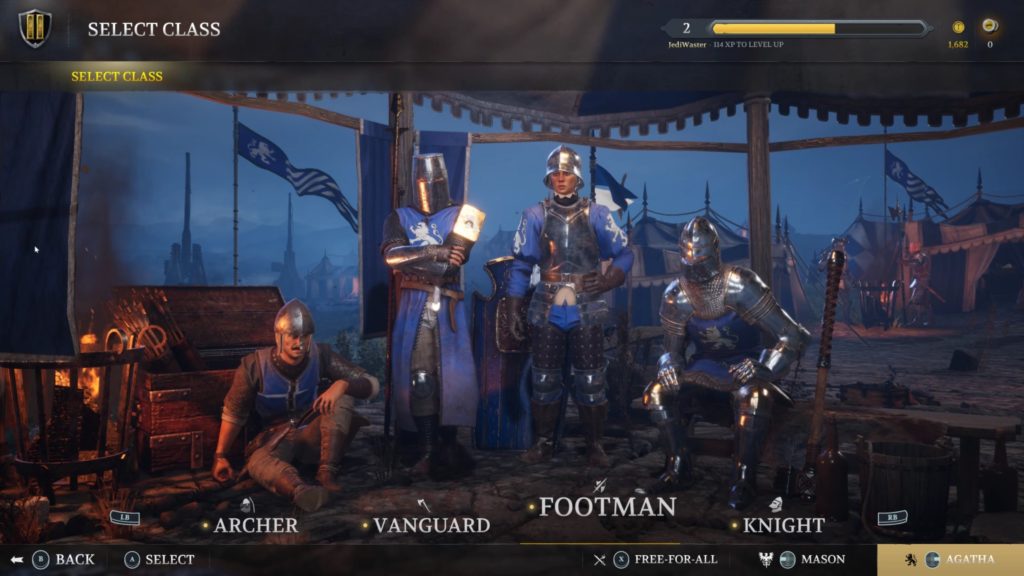 Rarely outside of a Soulslike have I felt so elated and so frustrated over and over again. In the space of a short fight, you’ll alternate repeatedly between air-punching and cursing through your teeth. There’s an inherent level of jank, of course, and the ragdoll physics can do some weird shit. But Chivalry 2 is a big step up from the original game in terms of quality. Environments are detailed and atmospheric, and the combat animations are impressive to behold. If anything, though, the sound design is king here. From screams and clashing blades, to distant horns and bellowed orders, the sound is excellent. It’s also bloody hilarious at times, as sound-bites come out of nowhere with Monty Python-esque timing.

Each of your classes can be customised and modified with cosmetics. You can unlock everything with in-game gold and time, or you can by crowns in the store to speed it up. As everything is purely cosmetic, there’s no pay-to-win at work. Having customisable characters isn’t really necessary, but it’s a great option to have. Little things like that help you connect to the action on a deeper level.

Although Chivalry 2 might look like a brain-dead hack and slasher from the outside, it really is more than that. There’s an element of skill that will separate those at its upper levels, but won’t stop newcomers joining in. Combat is thrilling and fun, objectives are clear, and each map is detailed and authentic. Most importantly, it feels fresh. There aren’t many other games out there doing this, certainly not with this level of humour. It’s built for fun and accessibility, and might be one of my biggest surprises so far this year.

Chivalry 2 is an excellent large-scale multiplayer game with enough humour, mission types and classes to appeal to any fan of medieval warfare.