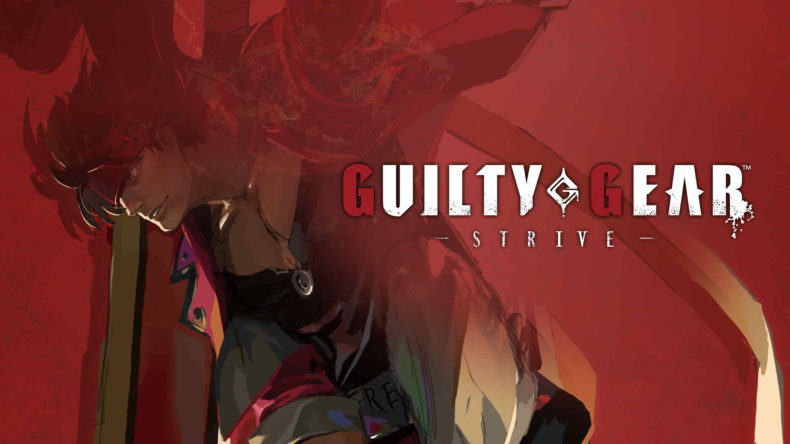 It has been well over a year since I was first able to check out Guilty Gear Strive. No thanks to certain global virus shenanigans which helped delay its release until now. Along the way, crucial tweaks needed to the netcode were made. To the point that the recent public beta whipped fans into a storm of anticipation for the final product. With a re-engineered fighting system that gives the series a brand new feel, astonishing graphics and more of the utterly insane writing and storylines we have come to know, love and be completely baffled by, Strive is more than worth the wait and hits with the impact of one of the crunching new wall breaks, whilst gently guiding newcomers with a fluid and accessible style. 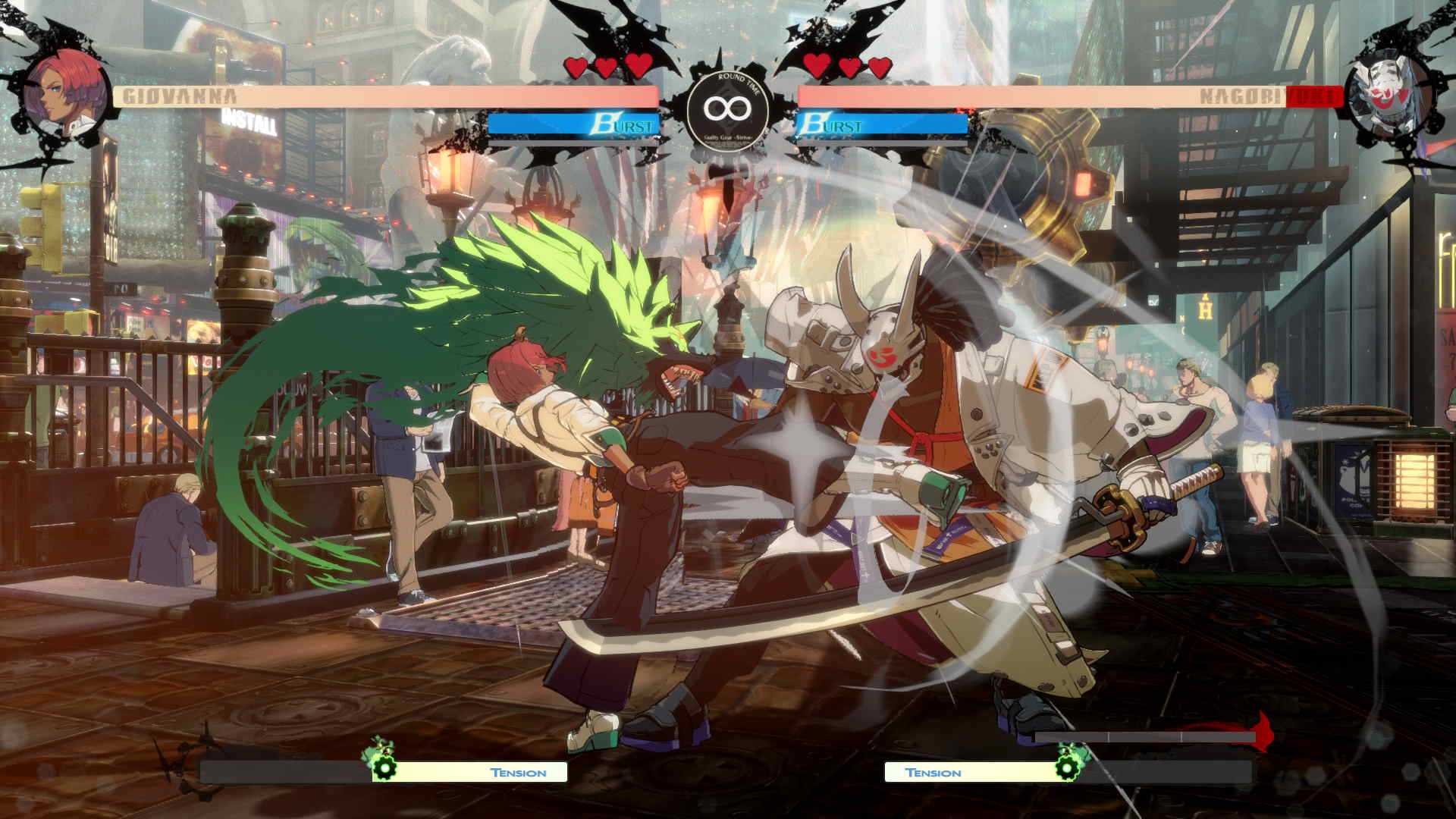 The best way to begin with any spanking new fighter is of course the tutorial mode. And as with just about every Arc System Works title I have tinkered with in the past few years, Strive has an exceptional hand holding foray into learning its brave new world. The Dojo has a series of lessons, and missions to complete. It also has a free mode which allows you to mess with the parameters of a match to mimic in-battle scenarios. It is possible to bury hours of time into the Dojo. It’s also immensely enjoyable using it to learn which character suits you best, get au fait with how Strive dust ups work, and improve your skills.

Even in training, you notice that the game is a bit slower than previous entries. There seems less of an emphasis on aerial dexterity and combos. They are still very much there, but seem pared back. Attacking is still punch, kick, Slash and Heavy Slash. The Gatling system is done away with, along with the Blitz Shield, Danger Time and Dead Angle attacks from Xrd, and new to the mix is the Dash command. This is executed by an assigned button or by hitting the directional input twice. Psych Burst attacks are present and correct. As is the R.I.S.C gauge, which fills when attacks are blocked. This can grant you the ability to Counter Hit more frequently once it hits 75% full. 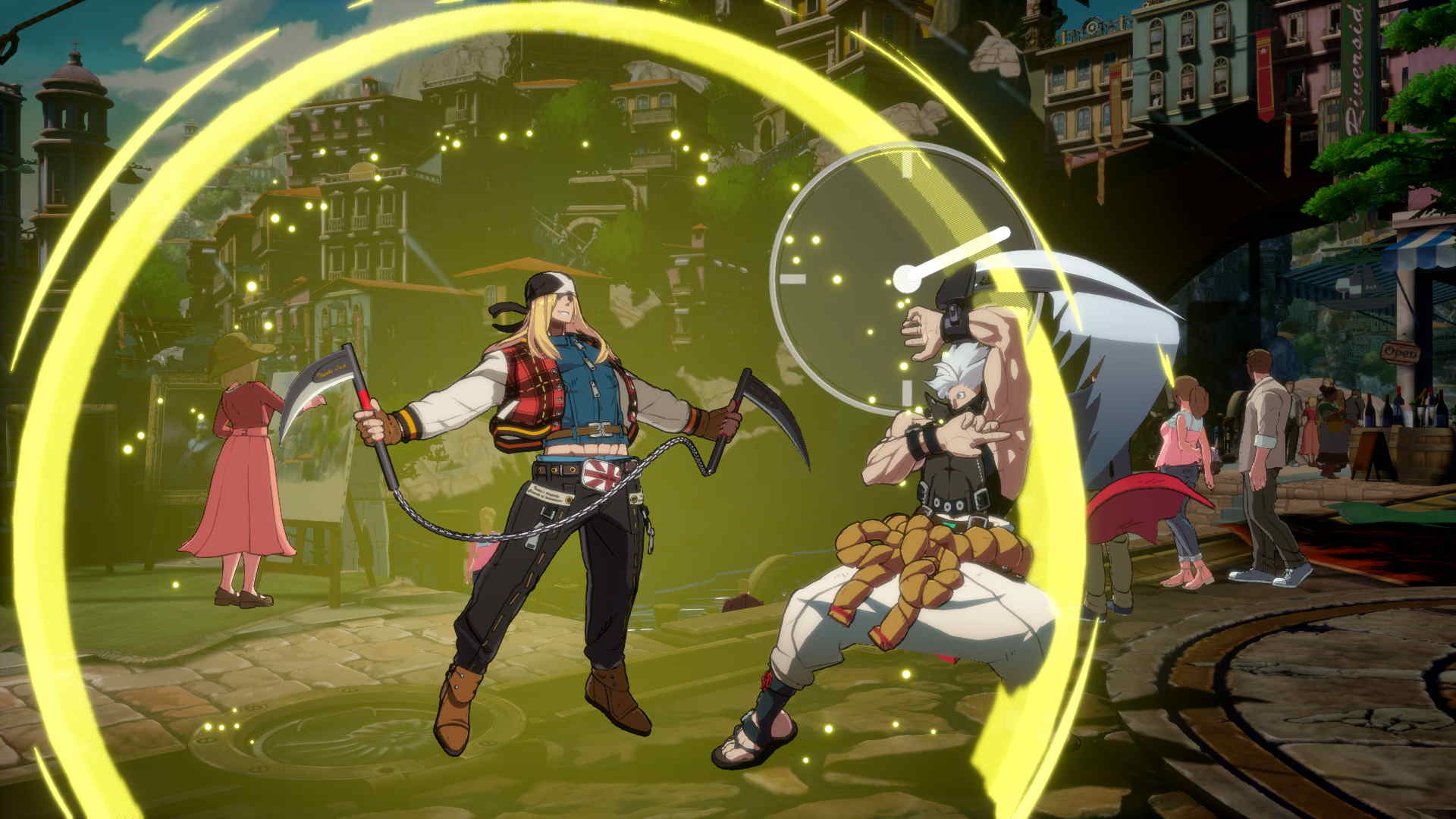 There are still time honoured Roman Cancels and the escape route of Burst moves in Guilty Gear Strive. But there are now four different Roman varieties, signified by purple, red, yellow and blue colourways. The different colours allow you to pull of a Roman in multiple situations. Such as when blocking, at the start or end frames of an attack, or when in a neutral state anticipating the movements of your foe. Each kind of cancel will consume part of your Tension gauge. This is the price you pay for being able to execute wild combo extensions, tease your opponent into a vulnerable situation, or evade damage yourself.

Managing your Tension gauge is given an extra sense of depth by the inclusion of the aforementioned wall mechanic. When you get your opposite number in a corner, dishing out a proper hiding allows you to smash them through the wall and into another part of the stage, topping up your gauge and resetting theirs into the bargain. It means that matches keep you mindful of the boundaries of your sumptuous anime environments. Ending a combo or employing a powerful super attack that sends your nemesis through a wall break can place you in a prime position to take full advantage and go on to triumph. 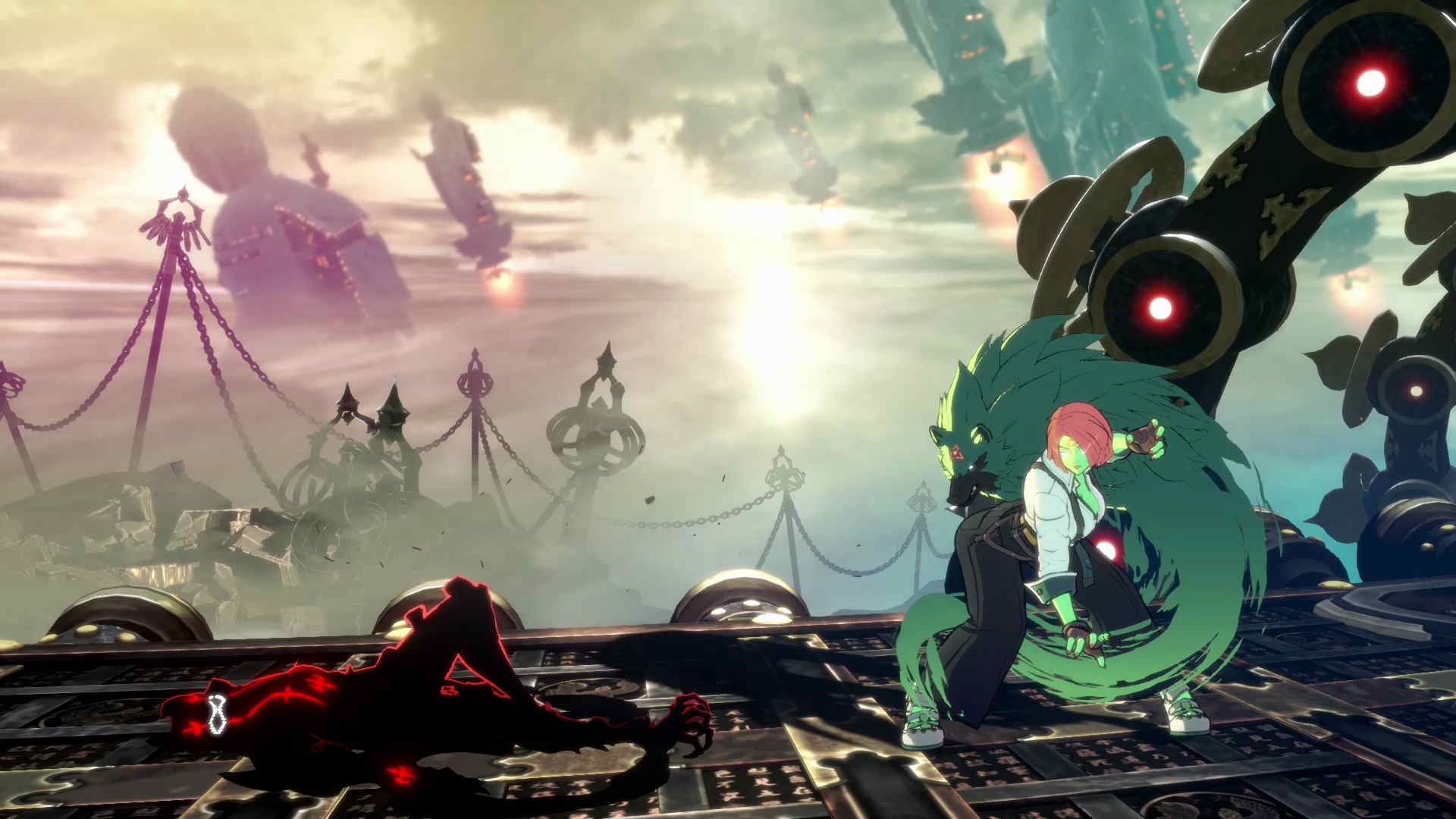 The Strive roster brings a mix of old and new with classic faces like Sol Badguy, Potemkin and Ky Kiske. They’re joined by vampire samurai newcomer Nagoriyuki. Oh and the beautifully designed Giovanna, a special forces operative assigned to protecting the United States President. Giovanna wields a spectral wolf spirit that enables her to attack with unerring speed. There is an amusing video knocking around that condenses the entire Guilty Gear saga into a half hour video. Newcomers may find it useful to have a look at this to get to grips with the storyline of Strive. It is a complex, fantastical beast. It isn’t for the faint of hearted, or those who don’t fancy literally hours of mind bending anime. Helpfully, there is an in-game glossary called GG World. This offers a treasure trove of information about Gear lore, and is well worth a scan.

The astonishing aspect of all this is that the game itself looks sublime tSo much so that, similarly to the terrific Granblue Fantasy Vs, it looks like you are playing a live action anime flick. The sprites, scaling and transitions between matches reminded me of the first time I played a Neo Geo. It is a joy to behold. And a treat on the ears too, with the standard Guilty Gear rock opera of excellent themes in full effect. Sonically, from the moment you hear the old adage “LET’S ROCK”, it absolutely slays. 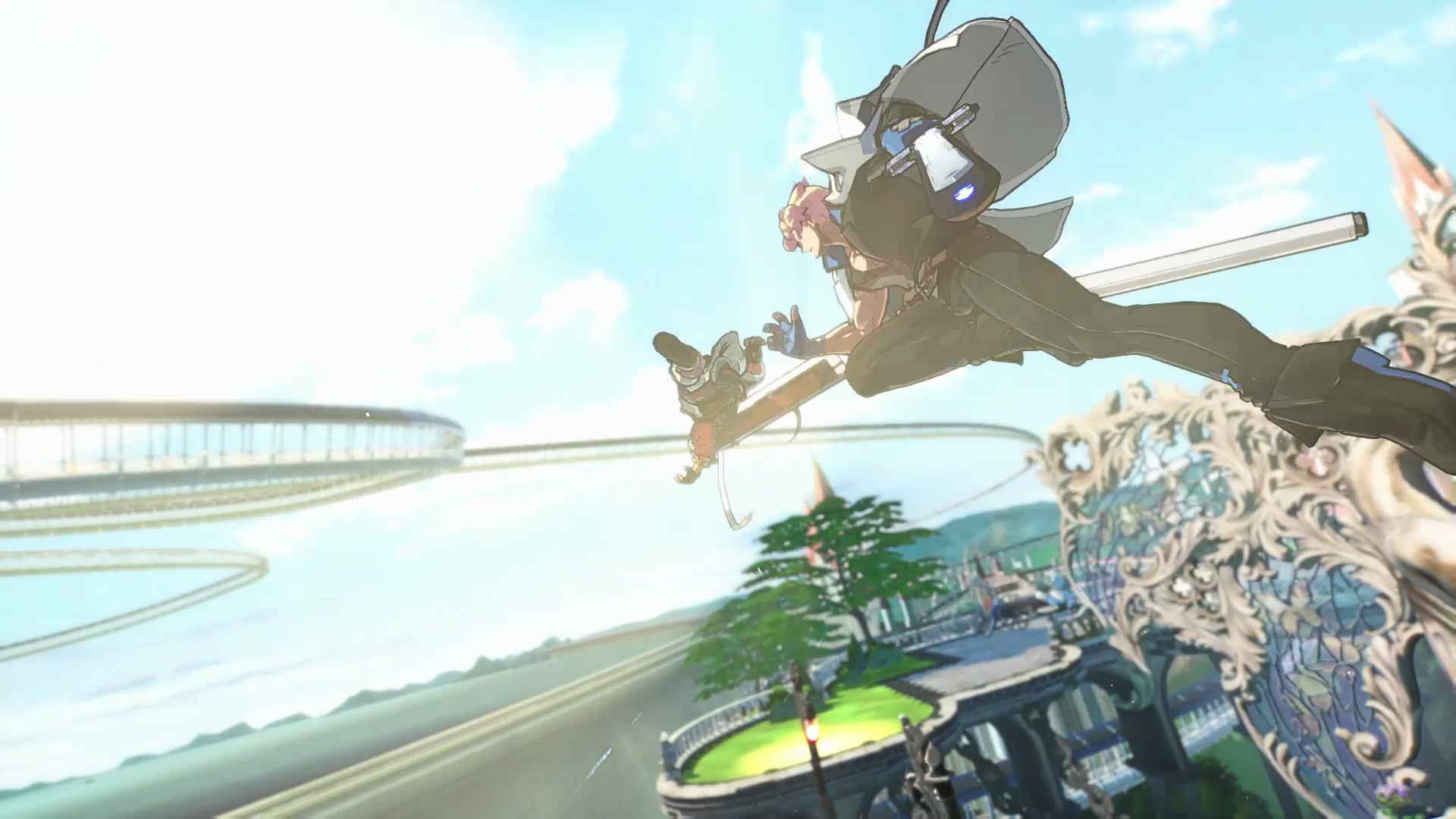 Longevity doesn’t come not from the unlockable gallery art. Nor the fishing-based way you get to spend in-game currency (really!). Instead it’s from playing this bad boy online, and the rollback netcode looks like making this a favourite. It is already pinned down for EVO and CEO. And it looks set to cause more than a ripple in the fighting community.

The strange lobby system remains. Here you construct a pixel art figurine that is reminiscent of a Terrance & Phillip character, and then pick up a weapon. You then wait for someone else to visit your avatar. Or you toddle along and find a counterpart for yourself. It is twee and rather unnecessary to say the least. 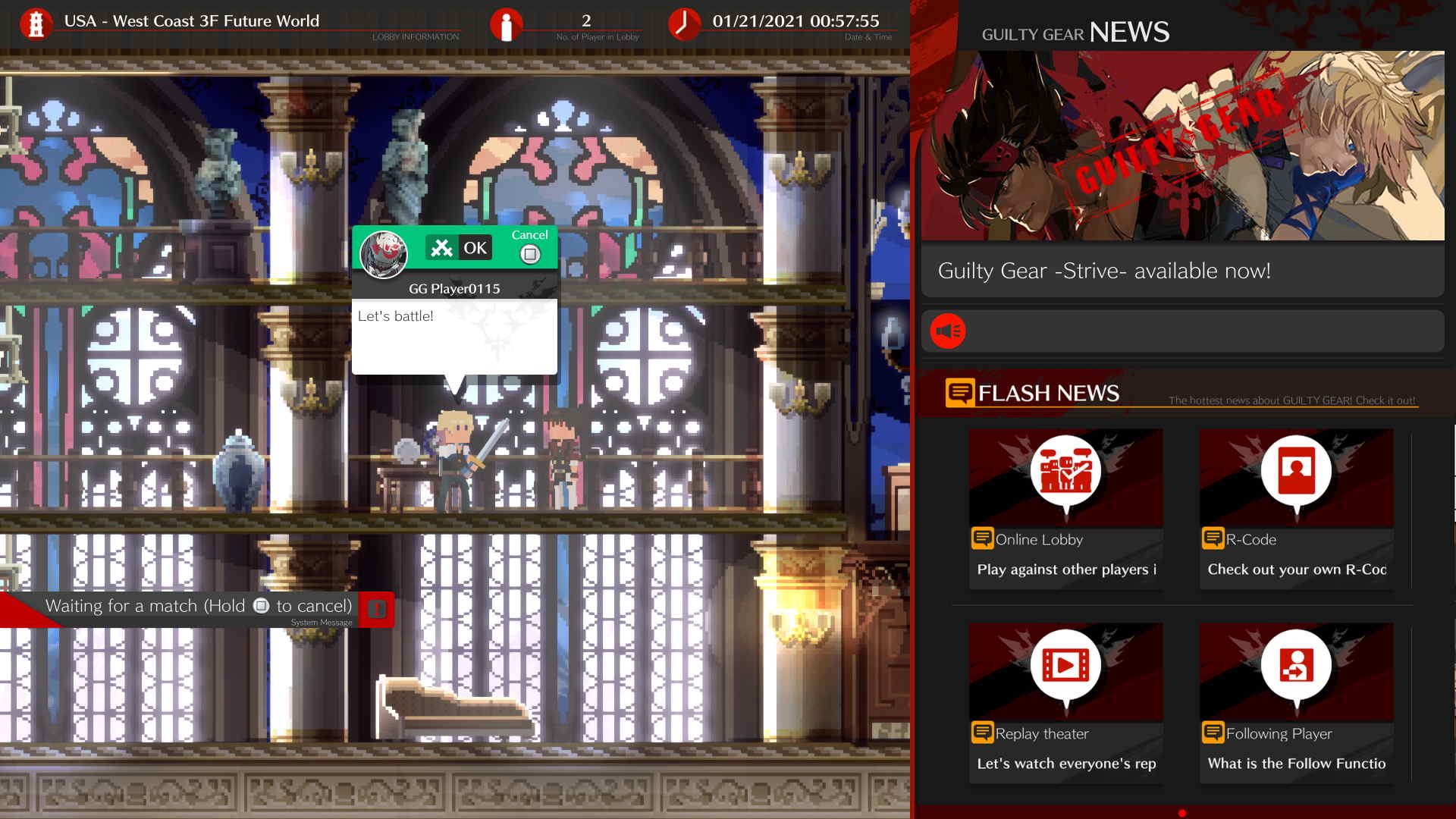 In terms of its looks, gameplay and daring choice to mix up the mechanics, Guilty Gear Strive is a real triumph for Arc System Works. The developer is fast becoming the gold standard of the genre. It is going to be extremely fun to see how it plays out in coming months. There’s a five character and two stage rollout of DLC on the horizon, as well as the e-sport tournaments that will feature it heavily. Invest in a decent arcade stick and a set of headphones that allows one to crank up the face-melting soundtrack, and get ready to rock out.

Weird lobby system
Story may be incomprehensible, and is very lengthy and heavy on the anime

Guilty Gear Strive is a real triumph for Arc System Works, fast becoming the gold standard of the genre, and it is going to be extremely fun to see how it plays out in coming months.