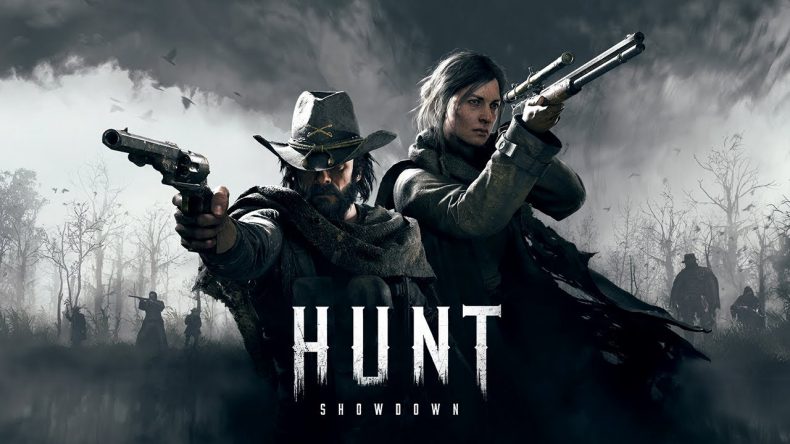 Survival Horror isn’t an easy genre to translate into a multiplayer game. The inclusion of other players online often makes it difficult to take in the spooky atmosphere, and sometimes the scariest aspect of these games is the toxic community surrounding them. The concept of being scared with your friends, fighting to survive is incredibly strong though. Hunt: Showdown looks to recreate the tension of a horror game, in a multiplayer bounty hunting game packed full of AI ghoulies.

Set in the 1890s, the sinister world of Hunt: Showdown is entirely overrun by monsters. From the standard shambling zombie “grunt”, to the mysterious water devil – overcoming just the AI nasties is difficult enough before you even take into account other players. Survival is not your only goal however, as both of the two modes have very specific objectives before you can leave with your life and your loot. Bounty Hunt is definitely the most interesting and fleshed-out mode in Hunt: Showdown. You and a team of two other hunters must gather clues to eventually find the location of a formidable boss enemy with a bounty on its head. You do this by activating your dark vision and following some mysterious blue orbs to one of the game’s many creepy locations. With each clue you find, the area on the map that the boss could be located shrinks, and once you have all three clues you’ll get an exact location on the bounty.

Knowing where the boss is located is only half the battle, as these guys put up one hell of a fight. The three potential bounties are for the Butcher, the Assassin and the Spider, with each of them providing their own unique challenge. The Spider is beyond fast and utterly terrifying, whereas the Butcher is just a juggernaut of health and damage, and the Assassin is a stealthy bounty to pin down. With a team of three competent players and some good supplies, they are beatable though – providing that one of the other 3 groups doesn’t take advantage of your vulnerable team. In the unlikely event that you succeed, you must take your bounty to an escape point to win the game. If at any point you and your team mates are taken down in this process, you will lose your hunter forever, and all of their equipment. For each monster or player you kill, or objective you complete you earn experience and in-game currency. As you level up, you unlock more weapons and items to purchase for your aspiring hunters. The weaponry in the game is generally very slow to reload and unable to hold much in the way of ammo, which means that hitting your target is essential to your survival. Alongside an assortment of pistols, shotguns and rifles, are a selection of melee weapons which are a useful way to make less noise.

The sound design in Hunt: Showdown is absolutely impeccable. Gun shots can be heard for miles around, providing useful information of where to go if you’re feeling aggressive. The tension you feel when you hear gunfire followed by footsteps is palpable, and a stray grunt could reveal your position in a heartbeat. Once you get closer to an enemy player, it’s important not to accidentally reveal your position by walking on shattered glass, into hanging chains, or even past a cage of dogs. The majority of my kills were obtained by carefully listening for the movement of a clumsy enemy, and taking them down so I could spread their loot amongst my group. If you don’t have any hunters you’re willing to lose in Bounty Hunt mode, Quickplay mode gives you a random hunter and low quality weapon to use in an intense solo game mode. Instead of finding clues in Quickplay, you find rifts. If you find three of them, you are given the location of the Wellspring. Activating the Wellspring and waiting for its timer to run out will win you the game, and net you the hunter you played as for use in Bounty Hunt. It’s a slightly less tactical game type, and without a team on your side it’s so easy to perish to even the most basic enemy.

The variety of undead foes in the world of Hunt: Showdown is pretty impressive. There are Hell hounds that travel in packs and have the potential to pick you off in an instant. Water Devils are menacing balls of tentacles that punish you for daring to enter the wetlands of the map. Some enemies poison you with swarms of bugs, others burn you and your health bar to ash. There’s no shortage of ways to lose a match and a hunter forever.

These methods of causing pain to a hunter aren’t limited to the AI, as a variety of fire, poison and swarm grenades can be brought into, or found on, the battlefield. Throwing the perfect grenade and picking off the fleeing enemies is so satisfying, and when you add tripwire and bear traps into the mix the enemy’s chance of survival drops even further. I only wish that the complex leveling and perk systems in Hunt: Showdown were explained by the tutorial a little better. Discovering that different weapons take up more space in your inventory, or how to upgrade your hunters, is left entirely up to you. Searching menus and discovering that you played your last 10 games at a huge disadvantage feels pretty unfair, and could be alleviated with a little more guidance from the developers. This isn’t helped by the fact that the matchmaking doesn’t mix skill levels.

Hunt: Showdown is a game I can see myself sinking many hours into. The hostile world is the perfect location for some tense multiplayer moments. I honestly can’t remember the last time I felt so scared in a game, cowering in a corner as enemy shots rattle off in the distance. The satisfaction of overcoming the odds and escaping with your life is amazing. There are some aspects of the game which are unexplained, but once you get to grips will all its systems there’s so much fun to be had. Hunt: Showdown will keep you coming back for more, while also making you wish you’d never stepped foot into its dangerous world.

Tutorial doesn't explain much
Matchmaking is hard on beginners

An incredibly tense survival horror multiplayer FPS, where you are just as likely to die at the hands of a monster as you are another player. Listening out for enemy activity is crucial, and once you learn how all of its systems work Hunt: Showdown is a an extremely satisfying game.