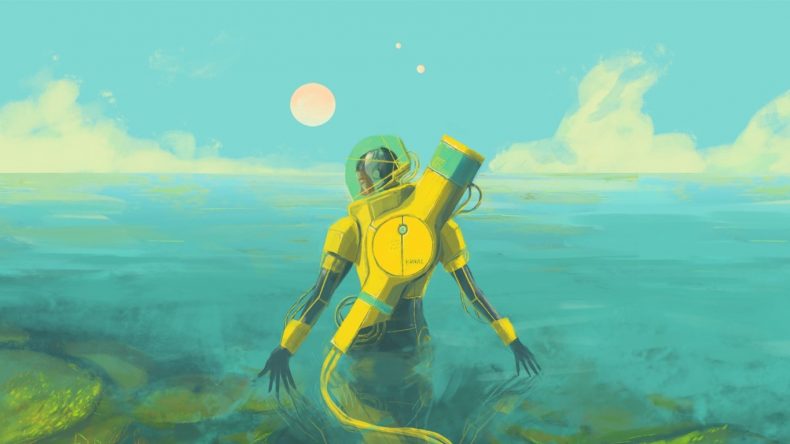 It took me a little while to understand In Other Waters. I loaded it up, and was initially confused at the lack of direction. I couldn’t understand what I was supposed to do. “You don’t know what you are doing, do you?” flashed up on the screen, and I paused. No, I don’t! What do I do? I muttered under my breath. A few button presses later, and things became clearer, I was looking at an interface for something. The person speaking to me was the dot in the middle of the screen, Dr. Ellery Vas, a xenobiologist who had just discovered a strange suit that can only be controlled by an exterior AI. Me?

I never thought I would ever write this when talking about a video game, but I was instantly reminded of Italo Calvino’s “If on a winter’s night a traveller”. In that work of post-modern literature you are the reader within the novel trying to read a book with the same title. You are you, on the outside looking in, but you’re also the “You” within the text. For a more pop culture reference, it’s like that bit in Stephen King’s Dark Tower series where the characters in the novel become acutely aware of the author – King – writing their fate. Oh! I thought, I get it. Now, I understand. I am the protagonist, but at the same time I’m not. I am the most important part of In Other Waters, but I’m also not, Ellery Vas is, but she can’t function without me. With that out of the way, you play as the AI controlling the suit Vas is wearing. Together you are trying to solve the mystery of her friend Minae who has been working in secret on this strange planet. Vas is a marine biologist, working for a company called Baikal which, much like the baddies in the movie Avatar, operates to strip other-worldly locations of their natural resources. Earth’s seas have been sterilised by climate change, and Vas reconciles her work for this terrible corporation with her ability to study life.

The game world is viewed simply as a topographical map, with the deep caverns of the underwater world represented by the density of the lines on your screen. Each element of the game’s UI is so thoughtfully and intelligently designed that it feels natural to use. On the Switch you press B to send a pulse out into the surrounding area that highlights things of interest around you. Using the right thumb-stick you can highlight points of interest, a stream of text appears detailing what Vas can see in beautiful detail. Press X and a sextant arm appears on your central console and you can guide Dr. Ellery to the point, sending out another sonar wave when you get there to gradually uncover more of the world. Further functions appear on the screen; to gather a sample you can either use the key functions or utilise the Switch’s touch screen to operate the collection of the sample, a delightfully tactile process of moving to the sample area, switching to the sampling UI, twirling the left thumb-stick to bring the sample into view then utilising the touch screen to gather it in a process that resembles a camera shutter. Vas may be employed by a rapacious and uncaring Corporation, but she is a scientist first and foremost, so gathering samples is important to her. You never get to see the beautiful forests she describes, nor the creatures she sees darting in and around them. Except you do. Sending pulses and gathering information on the points highlighted gradually builds a picture for Vas. Collecting samples to bring back to the Waystation hub at the end of each section proves yet more detail to the catalogue she is building for you. Navigate your way through the hub to the Taxonomy section and you can find beautifully detailed observations of the things she sees. Find enough examples and you will be rewarded with a gorgeously detailed drawing of what she describes. It is strange not experiencing anything of what In Other Waters has to offer first-hand, but the writing is so good there is a joy in the discovery through the meticulousness of Vas’s observations.

In Other Waters has a mystery to uncover: what was Minae doing in secret on this planet? Where has she disappeared to, and why? What is the suit that you are controlling? The answers to these come slowly, as you weave your way through the various areas that the world has to offer. You discover things as Ellery does, your tasks achieved through a number of sorties made from the central hub of the way-station. Head East as there’s a signal coming from that direction that is similar to that of the suit you control. Head South-West to find some plant species whose micro-biology will help you to navigate the currents that are blocking your progress to the North. And so on, to say more would spoil things and ruin the sense of discovery. Viewing the world of In Other Waters as an interface feels strange at first. The visuals are at times stark with a turquoise and yellow colour scheme that can at times feel a little too much. The palette changes as you go deeper, or venture into more dangerous water with the audio design matching this perfectly. Dive deeper and the noises take on a darker timbre. There are times of danger, however Ellery remains calm throughout, guiding you with the gentle puzzle solving through her meticulous observations. Should you fail to keep an eye on the oxygen or power levels and they deplete a drone is despatched to bring her back to the base with no real penalty other than having to retrace your steps.

It is a rare feeling in a video game to have the time and space to be curious. In Other Waters plays like a dreamy text-based adventure, with the rhythm of discovery uniquely tied to the actions you are performing on your console. Your reward for helping Dr. Vas solve the mystery of her friend and this planet is an increasingly detailed taxonomy of the life that inhabits it. It may not seem much, but the brevity and precise nature of the text combined with the elegant interface has created an experience I won’t forget in a hurry.

In Other Waters is a unique, dreamy experience that rewards your patience and time. It features one of the most elegant and thoughtful UIs in a game, and a clever, precise text to build a world worth exploring.