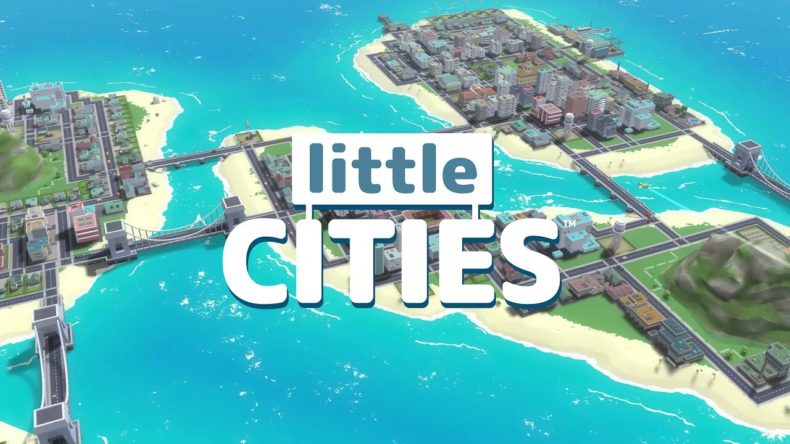 If you had to make a list of the most relaxing ways to spend an afternoon, city management probably wouldn’t feature all that highly. Public transport, taxation, commerce, cleaning pigeon crap off the benches… I mean, granted you’d probably delegate the pigeon crap thing, but still, it’s all busy-work. But if you take the Little Cities VR approach to city management, you’ll end up so chilled out you won’t even care where the pigeons drop their bombs.

Developed by Purple Yonder and published by nDreams, Little Cities VR is one of the most relaxing and charming experiences I’ve had with my Quest 2. This is Sim City by way of Ballamory, a quaint, idling city-builder that keeps the endorphins working with regular rewards, soothing music, and colourful, almost toy-like visuals. 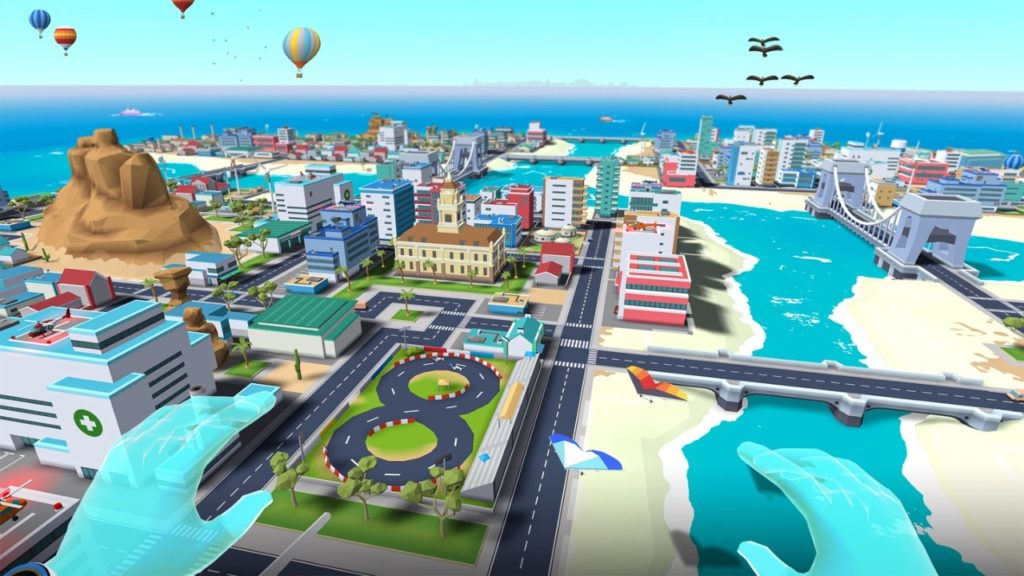 Your goal here is simply to build cities until you can build no more. You’ll begin with a small island that you can upgrade to Level 10 by constructing buildings and keeping your citizens happy. There’s very little to worry about though: you’re not going to be adjusting taxation levels or dealing with civil unrest. Each of the six available islands begins with nothing but a port and a spread of geological features such as thermal vents or mountains. One has a volcano, which we’ll get to.

From the port you construct roads, and on the side of the roads you plonk zones. You have three to choose from: Residential, Commercial, and Industrial. You’ll also need to build water towers, wind farms, and WiFi masts to keep the zones connected. The only challenge here is keeping the Residential zones away from the Industrial zones or any of the utility buildings. Each island has its own progression system that will see you unlock more buildings such as police and fire stations, an airport, thermal spa, a school, or a city hall. 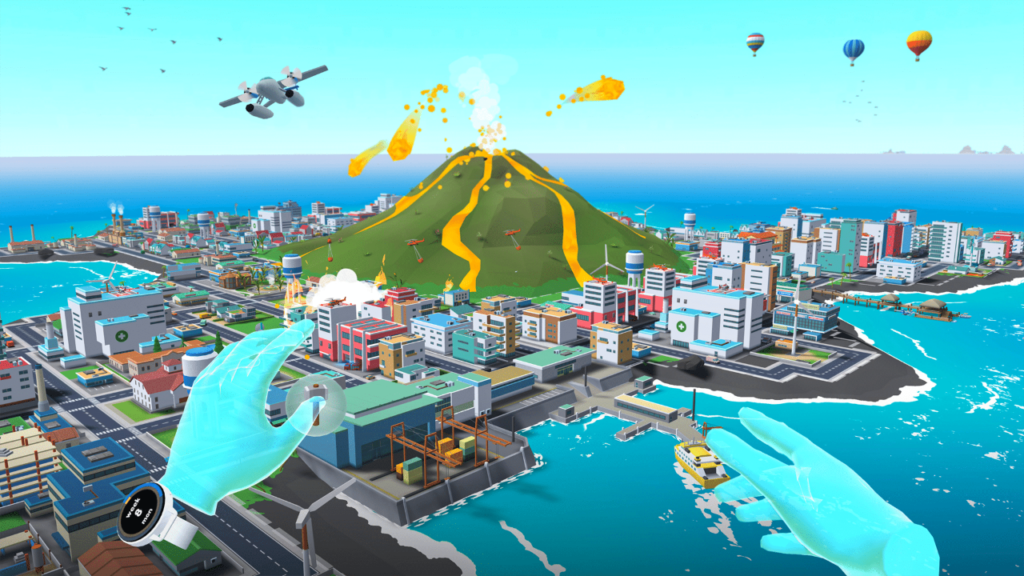 The more you build and the longer you maintain civil happiness, the more you’ll unlock. Some islands have multiple regions, and some buildings must be constructed in certain areas (a geothermal power plant has to be built on a thermal spring, for example). It’s not particularly complex, and you unlock new buildings and regions at a fairly high rate.

Being a VR game, Little Cities VR is pretty immersive once you start. You can zoom out so much that the entire island is directly below you like a weird-shaped rug, or zoom in so far you’re almost – but not quite – at street level. The joy comes from watching your zones develop. Sometimes two or more adjacent blocks will spontaneously fuse together. Houses might become apartment blocks, or two small shops might form a gas station. Industrial zones could be warehouse, factories, or huge refineries. The sheer number of randomised building types makes each city feel unique,

The world is full of little touches that more than make up for the low-detail graphical style. Birds wheel and dive in the sky, whales break surface; now and then you’ll spy a boat speeding along with dolphins swimming alongside it. Planes buzz by you, while the roads of your cities will be thronged with traffic as your little citizens go about their business. Some maps have hazards, such as a volcano or sandstorms, but even these barely trouble you. This isn’t a game built to create anxiety in the player. 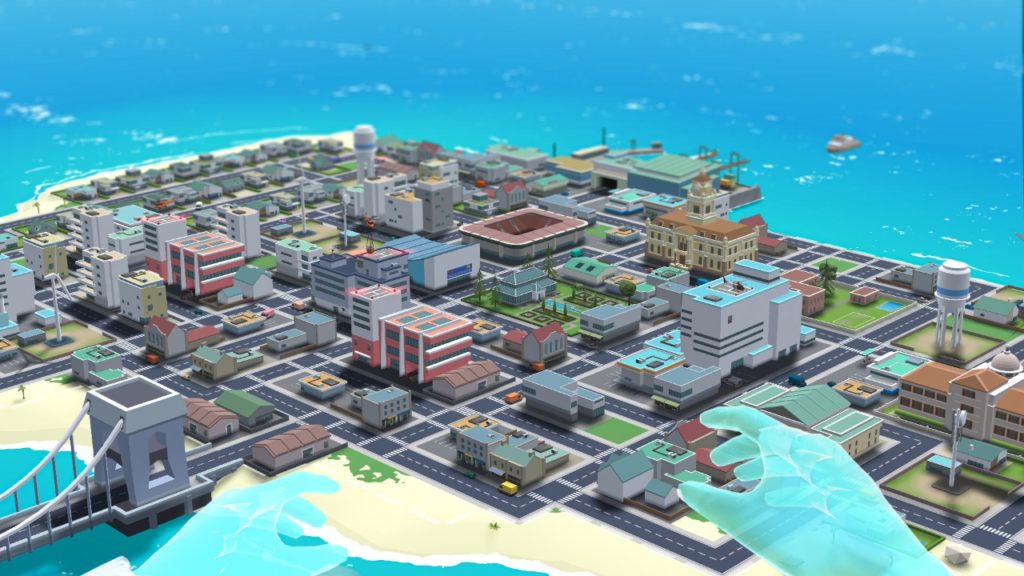 Time passes in days and weeks, monitored on a wrist watch on your left wrist. This shows you which of the three zone types are in-demand, as well as your current level of power, water, and civil content. Sadly, it’s not always a great indicator of what’s actually wrong. Sometimes the happiness metre will say something like “Your citizens don’t like the view from their window”, which means you need to move a utility somewhere. It’s not always this clear though, and can require some experimentation.

One of my favourite details in Little Cities VR is the way you access the World Map. It’s presented as a model on an adjustable table, which is situated on a balcony of one of the buildings you constructed in your first city. You can look around and see familiar things, as well as buildings you placed yourself. It’s a really nice touch and one that was completely unexpected.

Player comfort plays a large part in making Little Cities VR so much fun. You can choose to move the camera by smooth turning or by snap, and you can opt to play sitting or standing. Physically it requires very little from you, but will greatly reward your time. If you have a Quest and are looking for something to help you relax and wind down, Little Cities VR is the perfect city-builder to while away a few afternoons.

If you have a Quest and are looking for something to help you relax and wind down, Little Cities VR is the perfect city-builder to while away a few afternoons.