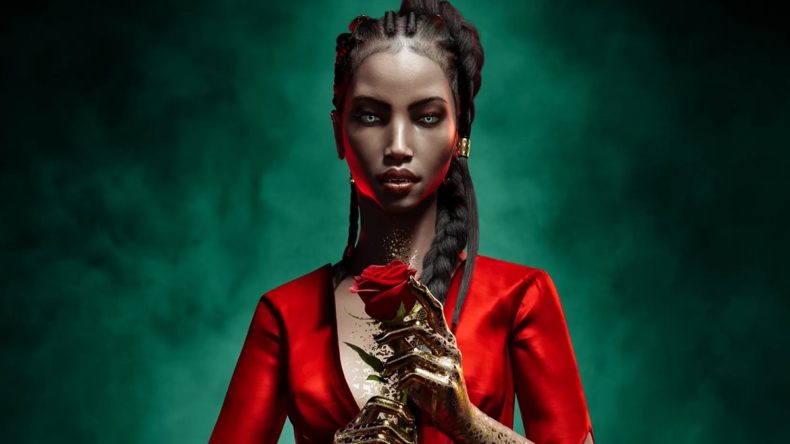 The world has always been fascinated with vampires, and due to that supernatural curiosity, there have been countless creations within the entertainment medium to quench the blood thirst of people everywhere. Whether it’s a focus on gothic and historical stories like Bram Stoker’s Dracula or Stephanie Meyer’s Twilight series that see them in a more modern and glittery light, we all love them. With the World of Darkness, vampires were used in tabletop form to give players an opportunity to write their own stories while providing plenty of background to the world in which their games took place. Vampire – The Masquerade: Swansong harnesses the essence of the tabletop game and turns it into a deep RPG with a gripping story at its core.

This story offers such a dense and compelling narrative that draws you in and keeps you hooked throughout. After an event known as a Code Red occurs (fundamentally a massacring of vampires), the current Prince of the Boston sect known as the Camarilla sends three of her trusted followers out to uncover the truth of what happened. As you begin to investigate the truth of the attack, a monumental conspiracy starts to unfold, leaving you unable to trust anyone. It’s a staggering story that’s filled with information, whether that’s from conversations with others or documents you find scattered around.

Vampire – The Masquerade: Swansong is overwhelming at first. Not only do you need to get used to the rules of gameplay, but there’re so many characters to get used to and there place in the hierarchy, along with a multitude of locations, organisations, and various other terms and practices that are all integral to the story. You’re given a codex where more detail is given, and you’re free to give it a read at any point for clarity. I honestly love how much effort has been put into it, and as a big reader, I felt it greatly helped to flesh out the sweeping narrative being told by Big Bad Wolf. Thankfully, the further you play and explore, the more you begin to understand everything, and like any good book, it all begins to come together, creating a clear picture in your mind. 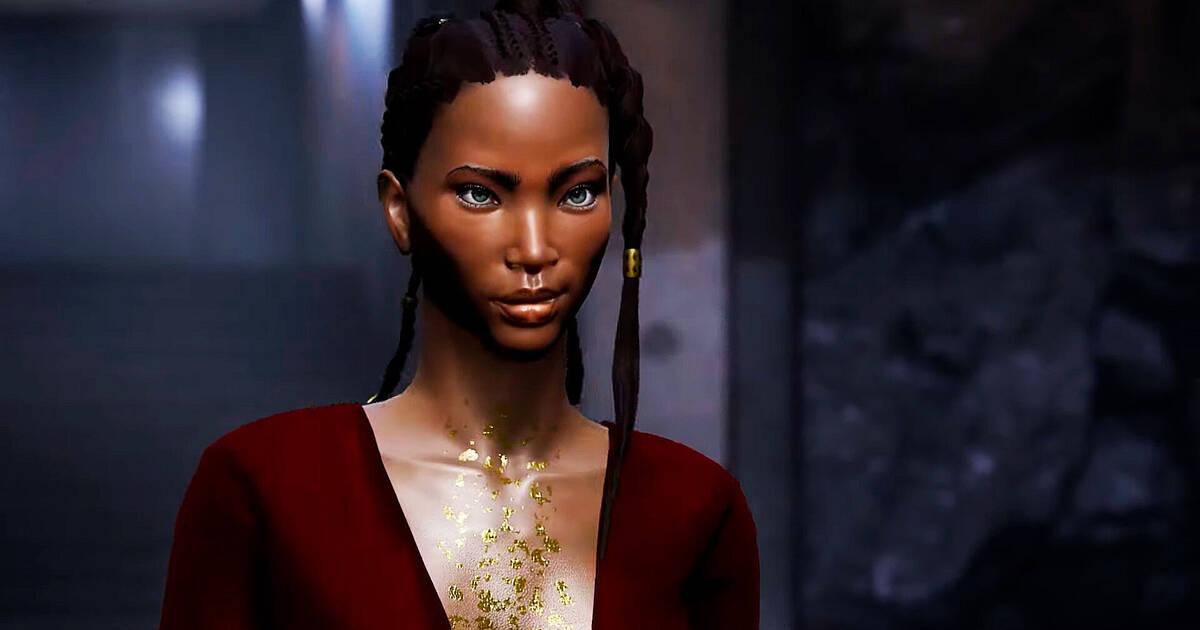 In Vampire – The Masquerade: Swansong, you play as three separate vampires who’s fates are somehow entwined. Each of the three characters feel unique to play as, thanks to the fantastic job that’s been done with the story. Emem is a strong and sophisticated woman who runs various nightclubs in Boston. She’s sassy and equally seductive, but there’s also a sadness to her that is explored thoroughly. One of her powers allows her to teleport from one area to another, mirroring the energy highlighted in her own personality. She’s been a victim, but that won’t hold her back anymore.

A trio of fascinating protagonists

Galeb is a loyal follower to the Prince, and has been for some time. He’s smart and can sense supernatural presences to find clues regarding the mysteries you uncover. While he’s normally calm and collected, Galeb can also be incredibly violent, and walking that path throughout offered an interesting element to the sections when you play as him. His involvement with a woman known as Xu Feng and how that impacts his story continued to intrigue me, and the sense of foreboding regarding certain spoilery things gave me plenty of reasons to keep on playing.

Finally, Leysha has the power to see into the future, although this gift is both a blessing and a curse. After spending time at a place called the Institute, she’s reunited with her daughter, Halsey, and does her best to keep the lingering fear of returning there at bay. Leysha’s story is filled with sorrow, however, depending on the choices you make, there can be glimmers of hope. As for her powers, she can turn invisible in a sense, as well as copying people’s appearances a la Hitman to get into places that are off limits, making her one of the most fun to play as. 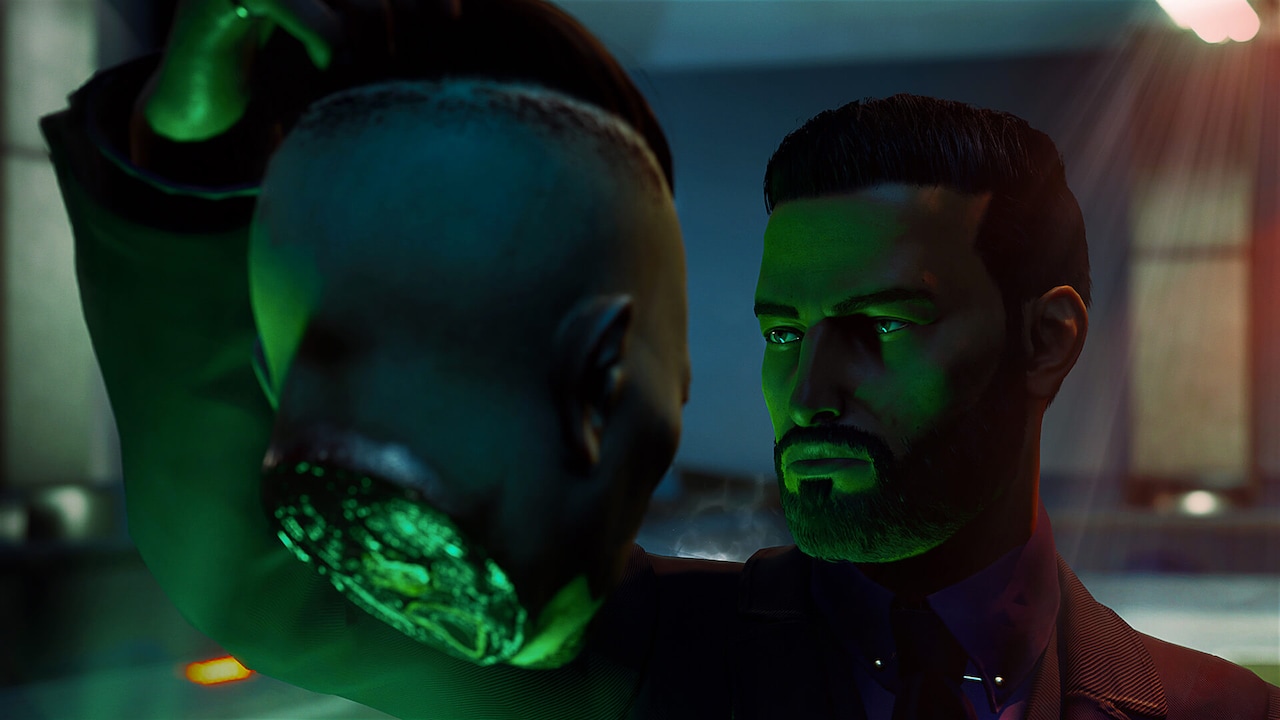 Vampire – The Masquerade: Swansong is more of a detective thriller, where words are your weapon as opposed to your fists. There’s a lot of dialogue to listen to, and while it can be skipped, there may be nuggets of information that you might miss out on. Along with all the reading you’re going to do, it might feel slow at times, but I personally enjoyed how deep the rabbit hole goes. When talking to people, you can use your abilities to get unique dialogue options that you might not of done if certain skills aren’t upgraded. Think of it like the Fallout series in that respect.

Emem, Galeb, and Leysha all have a range of attributes and skills that can be improved with experience points. In conversations, you’ll rely on persuasion, rhetoric, intimidation, and psychology to outwit those you’re talking to. If these skills are high enough, there’s a chance you’ll be successful. Not only do you need to have a high enough level in these speech requirements, your Focus plays a massive role in things. Represented by a gauge of blue diamonds, every time you choose to use one of these in a conversation, they deplete. If a time comes when you don’t have enough Focus, it’ll be necessary to find another way to ‘win’ the conversation.

A deep RPG in every way

There’re also exploration skills that can help you to maybe pick a lock or hack a security system, but again, this requires Focus. Some of these obstacles can be overcome by looking through documents or finding clues to where a passcode or lock combination might be. Like much of Vampire – The Masquerade: Swansong, you’re constantly given choices as to how to proceed, with every decision leading to potentially dire consequences if not done carefully. Knowledge is power as well, and by being well-educated and having the power of deduction, other hurdles will present themselves. Your success on missions offer more experience points to spend on these skills, so being thorough, patient, and careful often reaps more reward. 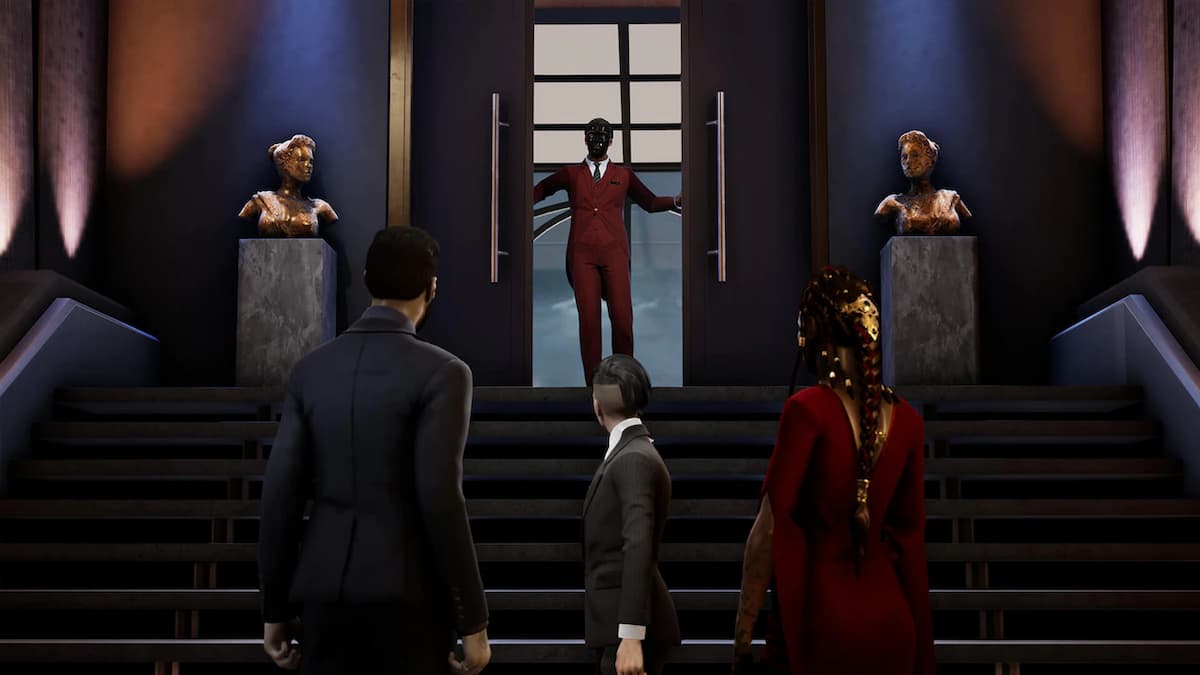 On top of these skills, you have something called Disciplines. Vampire-focused skills which can also be upgraded. As mentioned earlier, Emem can teleport, but it makes her hunger meter fill up. Galeb can scan items to reveal supernatural beings and further his investigation, again filling his hunger meter. Leysha can copy the disguise of someone, but it’ll make her hungrier. There’re also dialogue options where Disciplines can be used, such as overpowering someone’s mind akin to telling a Stormtrooper these aren’t the droids he’s looking for. Once that meter is full, you become the beast, and the whole point of the masquerade (concealing your identity to mortals) becomes obsolete.

To sate your hunger, you can feed on unsuspecting victims by drinking their blood, but do it too much and your suspicion level increases. Stealth is key when playing Vampire – The Masquerade: Swansong. It can be pretty easy to keep your intentions and your vampiric nature a secret, but being as careful as possible is much more important than not. Throughout missions, there’re particular documents to be found, and if you recover them all that suspicion level can be kept low. By acting like a whisper in the wind, you’ll gain improvements to your skills, so it pays to be cautious wherever you are.

By successfully using these skills and Disciplines, you can permanently improve them through Talents. For example, if you complete a quest without hunting any prey a certain amount of times, you’ll gain an additional increase to your hunger meter. There’re also specific character Traits as well that will improve your chances of successfully gaining information through conversations. Some verbal exchanges turn into Confrontations, and they’ll test your intelligence to make sure you say the right things. In-between these heated discussions, Vampire – The Masquerade: Swansong is teeming with puzzles, and they require you paying attention to everything you read and see. 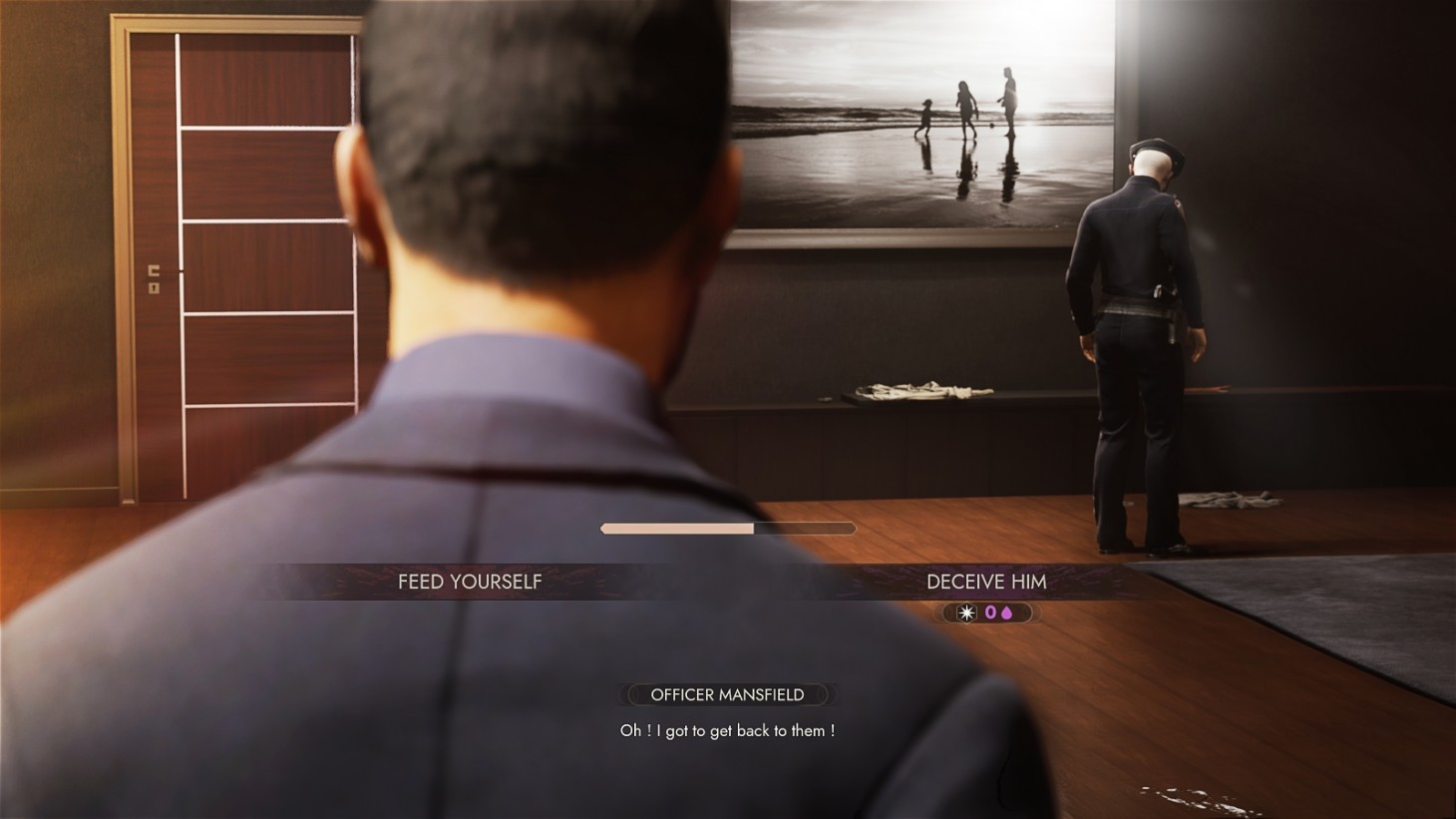 One early puzzle had me moving around circular platforms to work an ancient elevator, and it drove me nuts. Another made use of my powers of persuasion to get a locker code out of a scientist so I could gain access to his hazmat suit. Some are trickier than others, but they’re incredibly well-layered, offering plenty to do regardless of the location. Big Bad Wolf has done a fantastic job of constructing something that doesn’t rely on combat whilst giving you a constant need to keep playing.

The general look of Vampire – The Masquerade: Swansong is gorgeous, with some sleek environments and plenty of detail in the smallest of places, but some of the facial animations leave a little to be desired. Most characters look dead behind the eyes, and their mouths aren’t consistent with what they’re saying. There’s also some rough transitioning between scenes and load screens, but for the most part, I loved the way it looked. I also suffered a few glitches where heads moved awkwardly and clothes bled into each other, but not enough for me to consider it an issue.

Vampire – The Masquerade: Swansong is a political thriller set among the backdrop of a war between vampires and mortals in the heart of Boston. The conspiracies and mysteries kept me guessing, and every time I found a new bit of information, I couldn’t wait to see how it impacted everything. There were times when I could’ve quite easily missed something because I chose another story option, and some of these were huge. Early on, Leysha made a huge discovery about the Prince’s intentions, and I could’ve easily missed it if I’d just gone about my duties like an obedient servant. It’s vast and has a complex skill system, but it becomes easy to grasp the more time you spend with it.

Vampire - The Masquerade: Swansong offers a deep RPG game and an engrossing story, with some well-designed puzzles along the way.

Vampire: The Masquerade – Swansong: how to solve the blood lift puzzle

Vampire: The Masquerade – Swansong: what is the safe code?