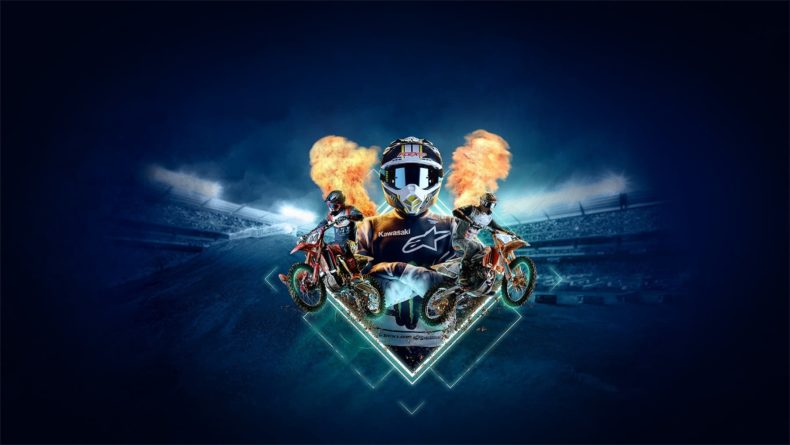 If you’re a newcomer to Milestone‘s official supercross series, you’re going to struggle with the nuances of controlling your bike across the various arena tracks. As much as speed plays a role in blazing a trail in the hopes of reaching first place, it’s just as much about managing the jumps and shifting your rider’s weight. Monster Energy Supercross 4 is a hard beast to tame, but once you adjust the race settings and break through the difficulty barrier, there’s every opportunity to find that sweet spot between challenge and reward.

If you’ve played the previous entries in the series, you’re likely going to be able to jump in without needing to learn the controls. A brief tutorial is available the moment you step in, but this is as basic and swift as they come, teaching you how to get a decent start then adding which buttons to press for drifting and managing your rider’s weight. Much of your learning will come from the mistakes you make whilst competing, and for many this will become the bane of your early hours. Whilst you can adjust AI difficulty and automatic weight distribution, it’ll still be challenging when getting the best out of your bike.

Once you do start to get used to racing, the Career mode is the perfect place to improve both yourself and the bike you select. It features a robust set of challenges and improvements, starting off in Futures and progressing through the various classes up to 250X and the 450X. After every race, you’ll earn credits and XP, which lead to unlocking skills within the hefty skill tree and purchasing parts for your bike. Between every weekly race, you can participate in training that’ll provide you with more credits and skill points. These training races include different types of challenges, such as rewarding you points for passing other racers and reaching as many checkpoints as possible. 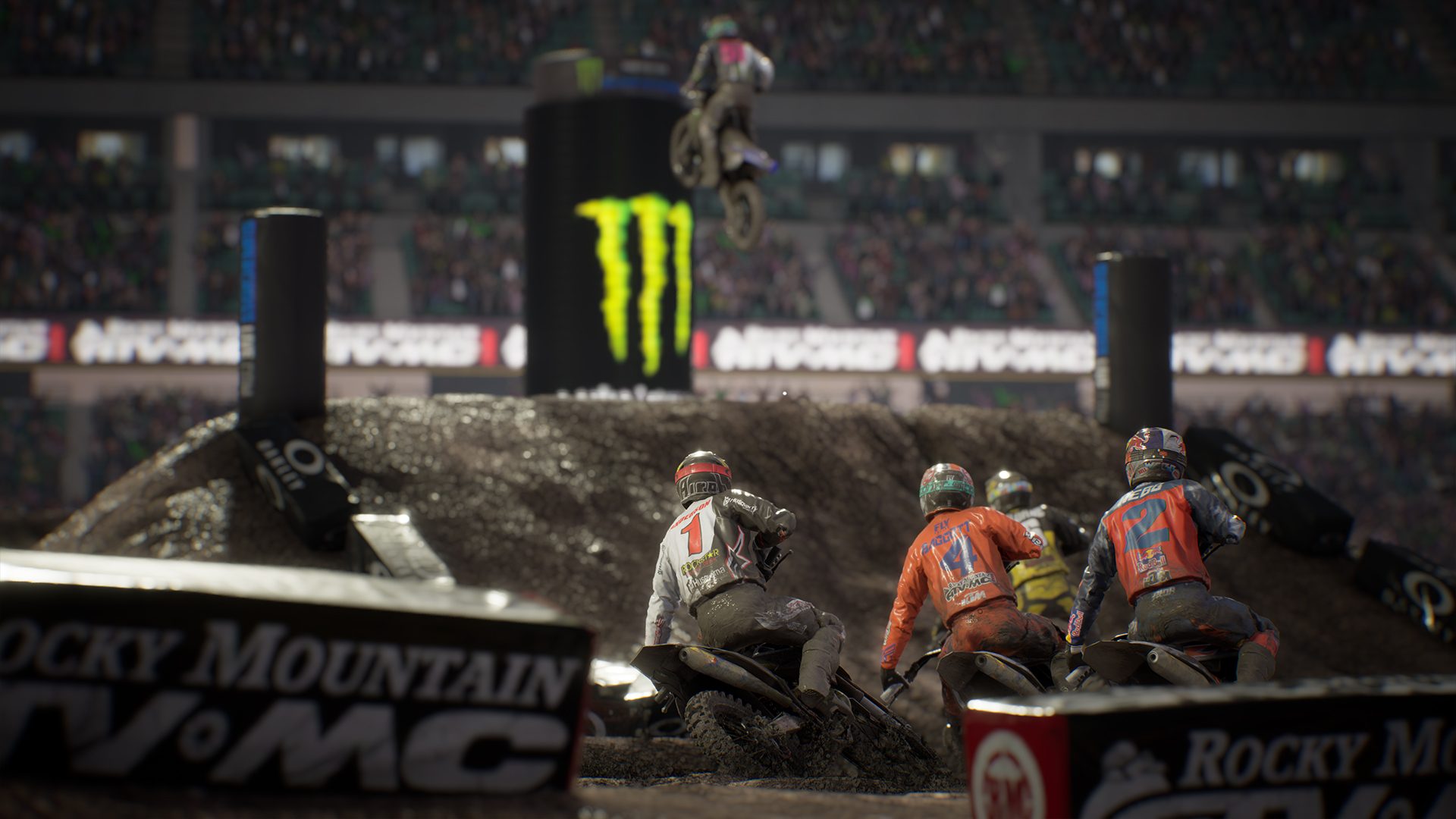 The bread and butter of Monster Energy Supercross 4 is the Career. With hundreds of licensed racers, and tracks that’ll be familiar to fans of the sports, veterans of the series will lap it up. Fresh faces to the world of supercross might not get the same kick out of it, but Milestone has made sure that they’re given the same level of immersion and attention. Handling is much tighter this year, meaning you’re less likely to fly off the track, and once you’re familiar shifting your rider’s weight and drifting into corners, there’s a satisfying flow to the gameplay. Once the controls become familiar, you’ll certainly enjoy competing against AI, but it does take a while before you’re at a decent level.

Being a relative newcomer to the series myself, I became annoyed with how one small mistake threw me off the track. Clip a bump with the front tyre and you’re thrown off your bike. Drift at the wrong second or go into a jump to slowly, and other racers speed past you. Whilst you can adjust the AI difficulty, I was still finding it harder to catch up. When you do crash, or you see a swath of opponents speed past you, it does become disheartening. The Career is a fantastic mode if you’re comfortable behind the handlebars, but it’ll take a while before you’re at a level where you’re not finishing in 22nd place every time. Thanks to the Rewind function, you do have a certain number of opportunities to wind back your mistakes and try again, but in the early stages you’ll likely run out of them.

Thankfully, Milestone has thrown in The Compound, a semi-open world where you can race around an area shaped after Maine Island. Here, you can get used to some dangerous terrain, and practice to your heart’s content. If you want to spend your time practicing, then it offers plenty of corners and straights to do so, but you can also enter races here against AI opponents. If you’re more of a master, you’re free to race against others and even play with friends if you so wish. Whilst some of the Compound features some devilish drops and fiendish bumps, putting your time into practicing here does give you the edge when it comes to competing in the AMA Supercross Championship. 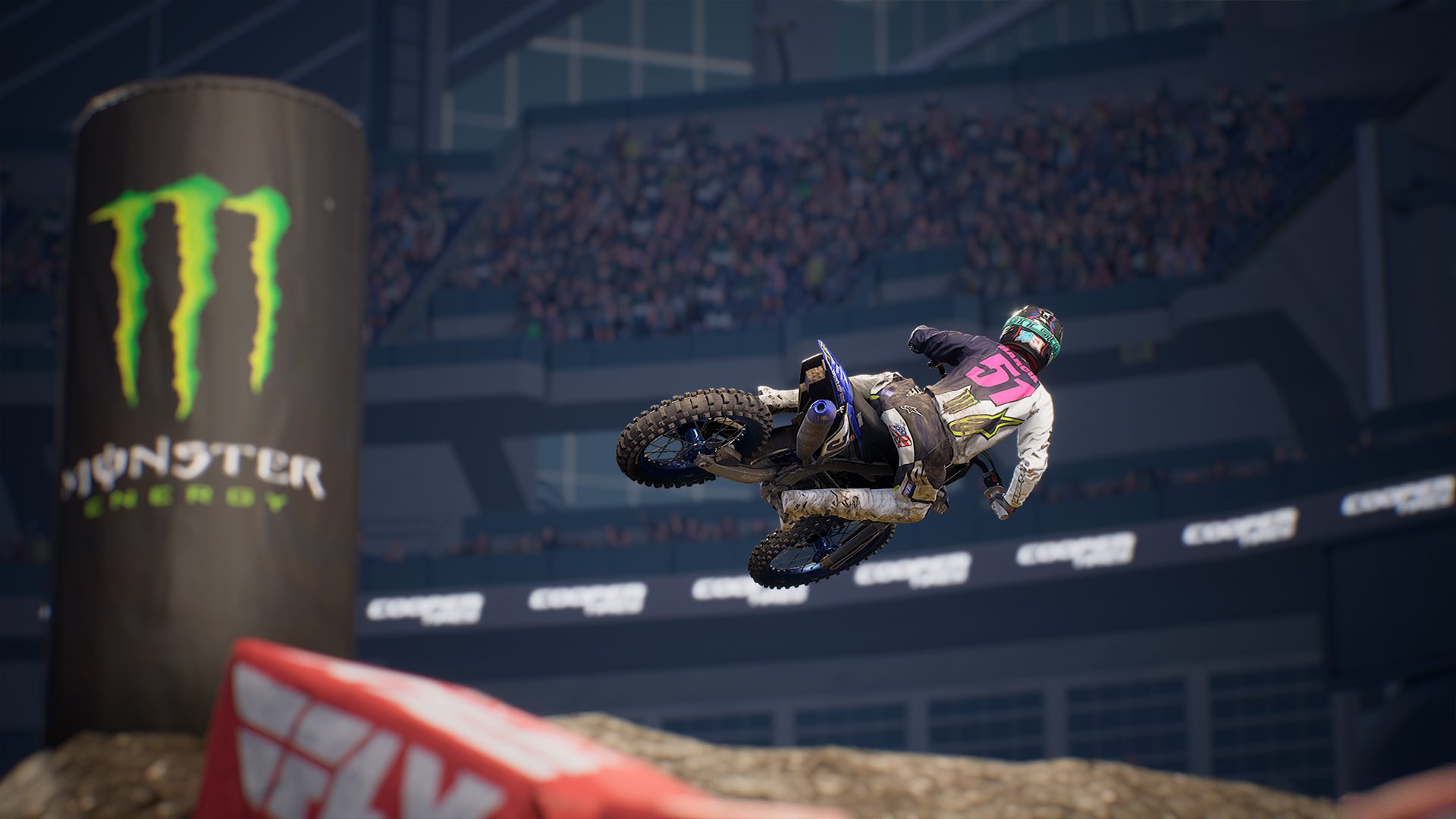 Outside of the Career and The Compound, there are isolated championships you can take part in, as well as racing against others online. There’s also a Track Editor that allows you to add almost anything you could want out of a track. From a nice selection of turns, jumps, and bumps, to changing the colour of the lights, finishing lines, and barriers, you’re free to do whatever you want. As you’ve probably gathered, Monster Energy Supercross 4 is a harsh mistress, but with enough practice, you’ll really enjoy the various degrees of subtlety in its controls.

Milestone has had the pleasure of releasing some of its other racers on the next generation of consoles. Whilst it looks great on PC, the PlayStation 5 version is particularly pretty. As far as dirt tracks go, you’re never going to be wowed by the browns and blacks of soil and muck, but the way it flicks up under your tyres as you race right through it, it’s obvious how these little effects look much better on a more powerful console. Riders and courses feature plenty of detail, and the sounds of the bikes roaring around the tracks are all pitch perfect, creating subtle differences depending on what your bike is doing. The loading times have been improved, and the general presentation is wonderful, running at a crisp 60fps.

Monster Energy Supercross 4 is definite step up for the series, with a robust Career mode that provides you with plenty to do. Whilst the controls haven’t really changed since the last outing, you definitely have a better grasp on the handling, and the attention added to the nuances of weight distribution will make veterans happy. The Compound is a wonderful playground where you can practice you craft, and the Track Editor is a welcomed distraction if you’re into customising your own courses, offering plenty of ways to build the track of your dreams.

Monster Energy Supercross 4 is definite step up for the series, with a robust Career mode that provides you with plenty to do. The Compound is a great mode to practice in, and the handling has certainly improved since the last outing of the series.