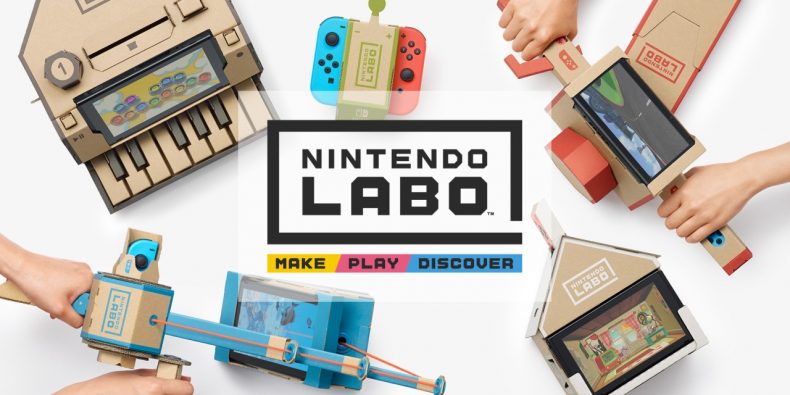 Nintendo Labo is one of the most bizarre video game announcements I’ve witnessed, but when it still felt very much like something I wanted to get to grips with. In true Nintendo fashion, it presented something fresh and something new that would surely bring families and friends together. Cardboard isn’t the first thing you think of when pondering your next purchase, and as an idea it seemed bizarre, but when you have it in front of you, tangible and ready to be played with, it becomes something else entirely. Labo is a fantastic product, but one I’m not sure will last beyond the initial “build and play for a few hours after” phase. That said, there are options there that will allow the inventive and creative among you to stick with it for months to come.

At launch there are two packs to purchase: the variety kit and the robot kit. The variety kit is far superior in terms of content and longevity, but the robot offers a great experience. The variety kit features a piano, a fishing rod, a motorbike, an RC car, and a house. Each one differs in the amount of time it takes to build as well as enjoyment whilst constructing. I started with the piano because I was keen to experiment with music and see what more it had to offer than just playing Greensleeves. It is the most intricate model to build and the most finicky, and after 2 and a half hours the piano was finally built. You can play music on it, record your own songs, and adjust with pitch and bending notes, as well as listening to familiar songs so you can listen and play along. At first it seems like magic: the piano works by recognition of white stickers you place on the keys that somehow react with the Joy Cons, and I still find it fascinating how it actually works. The RC car takes only 10 minutes to build, and offers a quick fix that gives you a brief introduction to what to expect. A few folds here and there, and you’ll soon have a small car to decorate, or leave plain if you’re a human without a heart. My kids designed a Pandacorn which, apparently, is a cross between a panda and a unicorn. The two Joy-Cons attach to either side, and the vibrations of the HD Rumble help to move it along the floor (a flat, hard surface is needed for the best results). Movement isn’t perfect, and you can’t really move in a straight line, but if you’re battling someone else it’ll make it fun with the hampered controls. Press the left button on the Switch screen and you spin left, and press right to spin right; if you press them both together you’ll go forward, kind of. There’s also an infrared camera and nightvision, which is impressive, so you can play games in the dark where finding a toy or coin or something in the dark gives you and your loved ones more things to play than just fight. The motorbike is wonderfully designed, with an ignition button, brakes, and revving the right handle makes you fly around the course. If you hadn’t already gathered, the Joy-Con sensors and vibrations help the different models work. For the bike, you place both Joy-Cons in either side of the handles, and moving the handlebars left and right help you to turn it, with the turning feeling particularly responsive. As well as taking part in races, you can build your own, and these short creative excursions add to the overall fun. Building courses for friends to race on is great, and my courses were tested by my kids, more so my eldest as she found it easier to control. Whilst we’re on the subject of age, older kids are going find them easier to control but also to build. My favourite of all the models is by far the fishing rod. I spend a majority of time chilling in my arm chair, fishing for rays, mackerels, sharks, and more. One thing that all the models do well is work exactly like their real life counterparts. Lower your line, entice a fish onto your hook, then pull up the rod and wind in the line till you make a catch. It sometimes takes patience, but it’s satisfying catching a whopper of a fish, and then seeing it swim about in your aquarium – a sub section of the Labo that allows you to amass a collection of underwater beasties and watch them swim about in harmony. The final main model of the variety kit is the house. On each side of the house, you place three items into the relevant holes, and by doing so you open up a plethora of mini-games and opportunities to feed and play with your monster. It’s a cute fellow, and he adores his jelly beans. This was my youngest daughter’s favourite model because she loved playing with the monster. The bowling mini-game is the most fun, as well as the mini platform adventure. You collect food to feed it, and when eating the various things back in your room, they’ll turn the monster into different colours, so there’s a customisation option to it as well. It was the easiest to build, and makes for the most accessible to the younger children out there. Most of the models in the variety kit take time to build, ranging from 10 minutes to 2 and a half hours. I found each process cathartic, giving me the same type of calm I feel when building LEGO. It’s truly fascinating to see each one come together, and whoever designed these creations has done a stunning job. One of the main issues I found when building was the way the instructions are displayed. The Switch screen details each step, and shows every fold line you need to make. There is a fastforward option, but it’s still a slow process, especially when some pieces have over 10 fold lines. I was expecting to build with my daughters, but due to the step by step nature, you can’t really build in groups. Also, some pieces of card are delicate, so you may accidently bend a piece of card or rip it. Whilst this isn’t frequent, it’ll still frustrate you when it happens. Luckily the cardboard is quite strong when pieced together, so you’re unlikely to damage anything beyond repair. The robot kit is a work of art, with intricate pieces and a finished product that makes you feel incredibly fulfilled. The arms and feet are connected to the backpack via strings attacked to heavy cardboard blocks, in turn creating the tension needed for your limbs to control the robot. When it’s built and you’re wearing the kit, moving left or right controls direction, and ducking turns you into a car. Putting your arms out to the side makes you fly, and thrashing your arms forward helps to break buildings on the TV screen. You can’t play it in handheld, which is pretty obvious, so you have more freedom to move. The Joy Cons connect to the backpack and the visor, with the latter allowing you to enter first-person and third-person simply by lowering it over your eyes. In all honesty, it’s a one trick pony: although inventive and expertly crafted, there’s little to do, so the four hours you’ll spend building feel for nothing.

Time will tell just how well this performs, but after the intial joy wears off, there’s little left for the older audience. The Discover section of the software does give you a chance to build your own creations, but you really need to plan out what inputs you need to program. I’m not that creative when it comes to building, so I had issues doing anything interesting. If you are keen on building your own stuff, it’s displayed well and gives you guidance with just how to make it all work. Labo is a great idea, featuring brilliant designs you’ll get to build and have fun with. The problem is whether you’ll be playing after a week or so. My kids are in love with it, and any chance they get they’re asking to play with it, but I’d happily sit down in front of the TV playing something else. Releasing themed packs in the future could really do the product a great favour; imagine building a licensed Zelda bow and arrow, or even using the motorbike in Mario Kart and the fishing rod in Breath of the Wild.

Whilst the creative process is cathartic and fun, the games on offer will appeal to the younger audience, or the families who show it off at parties.