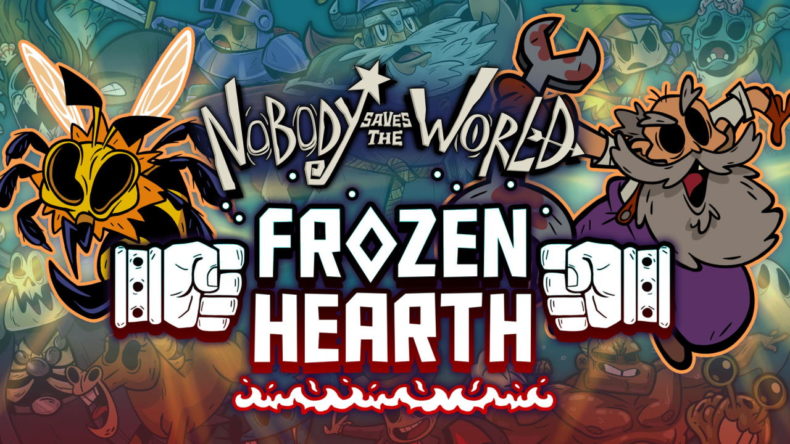 It seems crazy to think that Drinkbox’s Nobody Saves the World came out this year, with its January launch seeming a lifetime ago, but thankfully we can now jump straight into some extra content courtesy of the Frozen Hearth DLC.

Nobody Saves the World Frozen Hearth takes place in a new area, via a teleporter on the main overworld map. You are whisked to a strange world, that is both cold and flowing with lava. As you follow the main path, you’ll eventually come to Marrow Village, where you’ll be greeted by two flamboyant gentlemen who invite you to enter into their annual festivities, The Tempering, where they search for the True Being.

The Tempering competition that takes place in the Colosseum, is essentially a selection of challenges. Depending on how well you do in each challenge you earn a bronze, silver, or gold medal. Earning enough medals, allows you to progress to the next floor. Reach the top floor and you’ll be declared the True Being. Simple, right?

Nobody Saves the World Frozen Hearth | Challenge ahead

Well in design yes, but in practice, not quite so much. There’s definitely a level of challenge to be had within the various tasks you’ll undertake, and variety too. Some will simply ask you to kill a lot of enemies as fast as possible. Others ask you to be dexterous in footraces, or tackle bosses or tougher enemies. Throughout them all there will be rules to follow. Sometimes you can’t use certain attacks, and the various Wards that enemies can have are back to cause you a headache of which loadout to choose to even damage them. 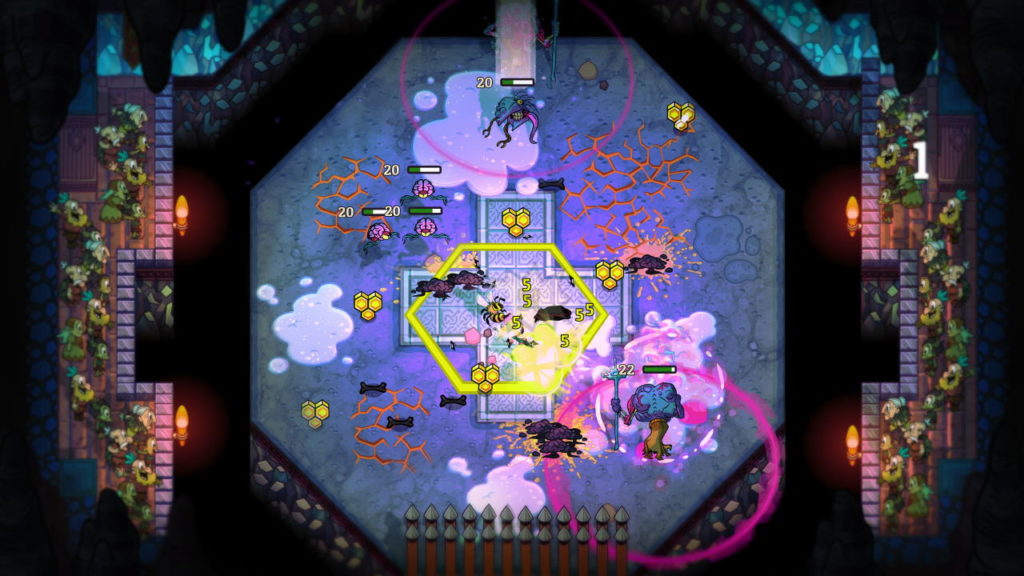 The tasks themselves deal with difficulty well. Most times, you’ll find grabbing a Bronze medal relatively straightforward, however progressing to Silver can take effort, and nabbing a Gold will take real consideration and expert execution of the chosen requirements. Naturally different players will gravitate towards different challenges and excel in them, whilst struggling with others. Thankfully to progress through the dungeon, you don’t need a collection of gold medals. In fact, to reach the end of the Colosseum, you’ll only need two-thirds of the medals available, meaning some you just find too tough can be left in favour of others.

As you open up another floor on the Colosseum, you are given a reward, and these are perhaps the highlight of the DLC. Ascending to the second and final floors of the Colosseum bag you two new forms to use in-game; the Mechanic and the Killer Bee. The Mechanic wields his trusty wrench for combo attacks and works well with other Familiar loadouts. The Killer Bee jabs foes with its stinger, and enemies drop healing honey upon death. Picking up health items with the Killer Bee, also grants bonus Attack power, making for interesting options.

Like the other 18 forms, these can be ranked up based on various challenges the game sets you and rewards you with more abilities to use. These newly-unlocked abilities are also added to your ability pool when working on loadouts, and they are useful to play around with. I nabbed a gold medal that had been causing me grief, by adding the Killer Bee’s passive ability to my loadout, and I got it on my first retry. Not bad for a new skill. The new forms have clearly been considered to not only have their own personalities and play styles but also to provide additional options that supplement other skills well too. And that makes messing around with them all the more fun.

Perhaps the only complaint of the Nobody Saves the World Frozen Hearth DLC is its length. Depending on your skill (and persistence), the challenges can be over in 2-3 hours, although admittedly, retrying for all the gold medals will take longer if you wish. You’ll spend a bit more time playing around with your new forms, and ranking them up, but then that’s it. As such Frozen Hearth is a better experience for those players to unlock towards the beginning of their adventure. That way new players can experience the main adventure with additional forms, and get the most out of them. Those players who have already seen and done everything in the main game will likely move on once the Colosseum has been beaten, which is a shame.

Nobody Saves the World thrived on its ability to encourage and reward experimentation with its many forms and movesets. Players who tailored their characters not only had more fun but were able to take on some of the game’s harder challenges too. Frozen Hearth feels like a well-considered extension of this ethos, with challenges specifically designed to get you considering loadouts to best suit a particular situation. The new forms offer something new to play around with and integrate well with existing forms. And whilst the challenge of the Colloseum is varied and commands your attention, it is over rather quickly, leaving you wanting a little more.

The Nobody Saves the World Frozen Hearth DLC provides fun new challenges and two new well-designed forms to experiment with.

Nobody Saves the World | How to access the Frozen Hearth DLC

Nobody Saves the World Mechanic guide