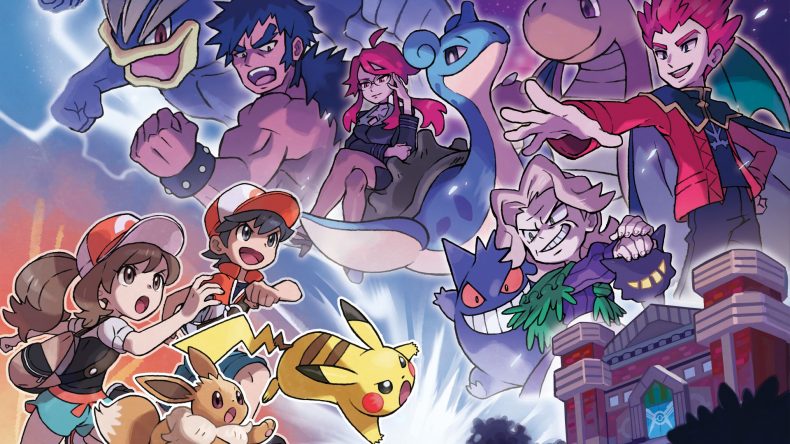 Nintendo has some huge IPs in its catalogue, and whenever a new game releases featuring Mario, Zelda, or Pokémon, we all get a little bit excited. There’s a reason for that, though. They’re a lot of fun, and almost always well executed, offering new ways to play or fancy additions to tried and tested formulas that help to keep them fresh. Pokémon: Let’s Go, Eevee! is no different. It’s fundamentally a remake of Pokémon Yellow; Pikachu’s there from the start, Team Rocket are on the warpath, and the story that made Blue and Red so wonderful is included.

Of course, the visuals are stunning, and it’s been completely updated to resemble Sun and Moon more than the series’ OGs, but the biggest addition to it is the way it integrates with the mobile phenomenon of Pokémon Go. Not only can you transfer the monsters you’ve captured on the streets of your hometown into Pokémon: Let’s Go, Eevee!, it also changes the way you capture and fight in the story. It feels like this is a game that wants to introduce people who may never have dabbled with the original games by making the capturing of Pokémon easier. Unlike the originals, if you bump into a Pokémon whilst exploring, you won’t be able to fight them. You literally have to catch them and that’s it. Whether you’re playing with the Joy Cons (attached or unattached to the Switch) or the new Poké Ball Plus peripheral, you’ll need to catch them without the need to battle and wear their health down. Pokémon are visible in the world, and it makes it a lot more alive than before. You can be wandering around Viridian Forest and see a Bellsprout or a Caterpie in the grass, so you know exactly what’s lurking in the shrubbery. This helps if you’re one of those who like to catch them all because you’re not constantly hoping that a particular type pops up in combat; or if you want to avoid constant encounters, you can walk around them and travel to where you’re going without the distraction. When you do try to catch one, the screen that pops up is the same as Pokémon Go: a circle shows up on-screen and changes from bigger to smaller. When you throw the ball (holding A and moving the control towards the screen, or simply pressing A if the Joy Cons are connected to the Switch) as the circle is at the correct size, you’re more likely to acquire it, and you’ll earn more XP in the process. Your entire party earns XP when a Pokémon is caught, which replaces the XP earned after a fight in the originals.

Grinding is what the series is known for, and whilst you’re not doing it solely through fighting, it never becomes a challenge until you get to Lavender Town, and even then there’re a lot of NPCs who want to battle. There is still a lot of fighting to be done, normally when crossing the path of random NPCs who’re standing around, and there’s the occasional Team Rocket Grunt that wants a battle, as well as your friend who starts alongside you. There are also trainers who’ll offer tougher challenges, but more chances to earn better XP and items as you play, and they’re found all around the Kanto region. All of the main gyms from Pokémon Yellow are here, and you earn badges like before. They become tougher the more you play, but offer great XP and options to level up your Pokémon, granting them new TMs to use on whichever mini monster you want to. Levelling up your Pokémon follows the same pattern as it always has, and the various stats improve when you do so. Perhaps one of the most obvious indicators that it’s aimed at younger or less experienced players is the inclusion of CP – an overall stat that you can focus on to see how good a Pokémon is. It’s good to see this stat in the game because it benefits those who prefer a streamlined game without the need to spend time building particular statistics and just want to have more fun battling. However, if you enjoy the specifics of levelling up, you can also see how good the Pokémon you catch can become. This means if a Pidgeotto will only get a ‘Good’ rating in its defence, you can trade it, or send it to Professor Oak for some candy. If you played Pokémon Go, you’ll know how important Candy is, and it can now be used in Pokémon: Let’s Go, Eevee! Feeding your Pokémon candy improves specific stat lines, and the rarer the candy, the more improvements it does.

There are 151 Pokémon to catch, featuring their evolutions, as well as their Alolan forms from Sun and Moon. These really help to bring evolution full circle if you’ve been a fan of them in previous games, and after Sun and Moon, it’s cool to see their Alolan forms in Let’s Go. Depending on who your companion is, you’ll learn specific moves that can help you in the world, such as chopping down trees that block a certain path, or gaining sight in pitch black tunnels, and when in battle your companion will learn exclusive moves that’ll prove incredibly powerful. There’s a real emphasis on bonding with your partner. When you have a few minutes to spare, you can fuss over them by stroking and cuddling, as well as feeding them some berries or other treats. Doing so will help them find specific items that won’t be visible to you. You can do this by moving the Joy Con or Poké Ball Plus, or using the touch screen when in handheld. As mentioned already, Pokémon Go plays a huge part in Pokémon: Let’s Go, Eevee! You can transfer your captured Pokémon from Go to the main game after you’ve reached Fuchsia City, in the form of GO Park, and you can include it in your party. If you’ve played the hell out of Go, there’s enough room to hold 1000 Pokémon, which is nuts. It’s relatively easy to connect the two games, and whats more you can play with them in the Go Park.

Another great feature aimed at helping players unfamiliar with Pokémon RPGs is the ability to get help from someone who knows what they’re doing. For example, my daughter played Sun, and loved it, but she’s still relatively new to the franchise. By shaking a second Joy Con I was able to join her game and help her to fight in a battle, as well as use a second Poké Ball when she tried to capture a wild Pokémon. Not only was it helpful to her, it also gave us a chance to experience the joys of playing together as a family, as well as making battles much easier to win.

Pokémon: Let’s Go, Eevee! does a great job of allowing players to enjoy what made the series so good as well as incorporating the best features from Pokémon Go and presenting the same amazing adventure veterans have enjoyed in the RPG. This may not be the brand new adventure we’re all waiting for, but it’s a nice stopgap for those wanting to scratch that itch.

Might not please veterans of the series
That music over and over again!

Pokémon: Let's Go, Eevee! is a great blend of the old and the new, bringing the same great adventure to the present, and incorporating Pokémon Go brilliantly to help newcomers feel welcome.