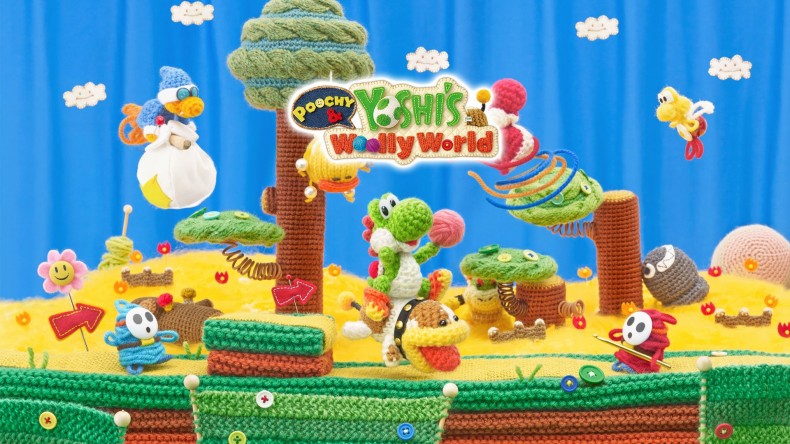 Mario games have always been complacent in giving the plumber’s most adorable sidekick a backseat, should he be lucky enough to appear at all. Yoshi, our long-tongued anthropomorphic dino pal, has had a few of his own games in the past across various systems, with most being similar in mechanics to the Mario titles. Poochy and Yoshi’s Woolly World for 3DS doesn’t exactly break this cycle, but its yarny aesthetic does allow for unique interactions with the surrounding game world and a somewhat memorable adventure.

In this world, much like the title suggests, everything is made of wool: the Shy Guy enemies, the various platforms and scenic decorations right down to Yoshi himself. Evil Magikoopa Kamek has turned all of the Yoshi’s into yarn versions of themselves and stolen them away, leaving our protagonist Yoshi to traverse various worlds in order to restore his kidnapped pals. There is nothing exactly special about the plot of Woolly World—it uses the typical damsel in distress motivation that we are so used to seeing, only now the damsel has been replaced with some dinosaurs. It does feel threadbare in this regard, but not many people play Yoshi titles for the white-knuckle storytelling. The way Yoshi is controlled will be familiar to anyone who has played a previous title. He is able to use his long tongue to devour enemies, turning them into balls of yarn instead of the usual eggs, as well as jump—frantically kicking his legs as he begins to descend in order to boost himself higher, all while letting out that signature squeal. The balls of yarn that Yoshi can collect allow him to interact more directly with the levels around him; you will see outlines for static or moving platforms that you’re able to throw yarn at, filling them in and making them useable. Traversing the various worlds, gameplay is pretty much what you’d expect: enemies are not particularly difficult, bosses even less so, but you’ll still have a certain degree of enjoyment as you delight in the design of the colourful worlds.

The golden thread which holds it all together (if you’ll pardon the pun), is the woolly art style that creates tangible and interactive levels for you to play with. Using Yoshi’s tongue, you’re able to tug at loose strands of yarn which then unravel to reveal secret areas or collectible items. In each level, there are five yarn balls to collect which, once collected, turn into a themed Yarn Yoshi for you to play as: a tropical level will garner you a Yoshi styled after a watermelon; a desert level will let you play as Skeleton Yoshi, and so on. These different variants provide no special powers or abilities, but do encourage you to hunt down these yarn balls (and make you kick yourself when you miss one). You’re able to design your own Yoshi too, using either a simple toolset which block colours the different parts of the dinosaur, or a complex one, which allows for much more freehand freedom. I never really felt compelled to design many of my own Yoshis, not when there are so many wonderfully designed ones to pick from already. However, it is a feature which some will no doubt lap up intently since it wasn’t included in the original version of the game.

Graphically, Poochy and Yoshi’s Woolly World performs well on the 3DS, but I can’t help thinking about how much more glorious it looks on Wii U. There is a missing sort of sharpness in the textures, which means the impression of a woolly environment does not come across as strongly as in the previous version. Small details such as yarn clouds can go unnoticed on the scaled down screen, really requiring a 1080p display to be fully appreciated. As for Yoshi’s pal Poochy, his inclusion feels more like an afterthought than a real attempt to add a new dimension to a year-and-a-half old game. Poochy mainly appears in an extra game mode called Poochy’s Dash, which sees the cute pupper zooming across the scenery collecting beads which can be used to buy power ups for Yoshi. He can be tagged into the main game by scanning a Poochy amiibo, which will allow Yoshi to ride him, but you’ll be at a loss if you don’t own an amiibo-compatible New 3DS or a NFC scanner for older models. Playing on an older 3DS and not having a Poochy amiibo to scan, I can’t exactly say how much his participation can benefit the player, but it is disappointing to know that those who lack the required hardware will not be able to use Poochy in-game. His children, called Poochy-Pups, can help players in the main game, but only if they are playing on Mellow Mode—the easiest difficulty and likely the one which most older players will be avoiding. However, Poochy does stand out in the game’s Yoshi Theatre which displays 30 stop-motion animations, all of which fantastically communicate the essence of this woolly world and the friendship between the two title characters.

As platformers go, Poochy and Yoshi’s Woolly World does attempt to bring the majestic yarny visuals of the Wii U title to the small screen, but is a middling effort to say the least. Fans of the genre should enjoy the quirky-ish gameplay provided by the interactive levels, but shouldn’t expect to face much of a challenge at all or see any real deviance from formula. The woolly creations and set pieces do make for a beautiful adventure, but they’re just not enough to see Yoshi knock it out of the park this time.

Poochy and Yoshi’s Woolly World presents us with a wonderfully realised yarny universe to play around in, but it’s the formulaic gameplay and lack of incentive for returning players that keeps this Yoshi title from reaching platforming iconicity.