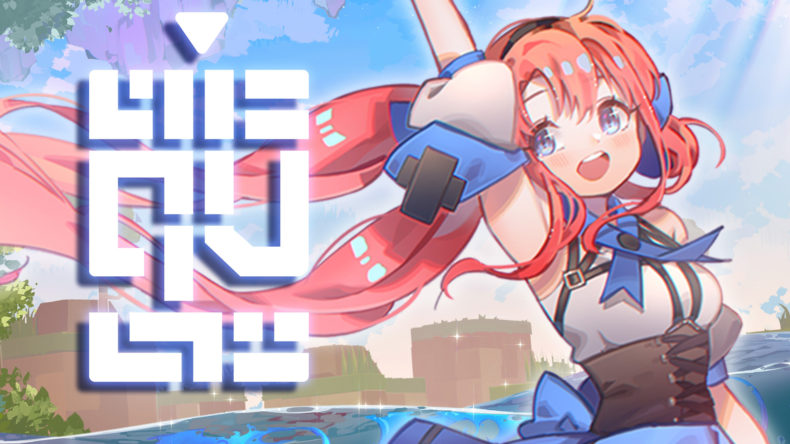 It can be hard for a puzzle game to get the attention it deserves. Showing off huge set pieces and high octane gameplay is a surefire way to get players excited for your new release, but it’s rare for pushing a box onto a switch to have that same raw sex appeal. There are puzzle games that get around this issue of appealing to their audience via a trailer. The Witness used huge interwoven mysteries in an open world to entice fans, whereas this year’s Murder by Numbers blended Picross with Phoenix Wright style investigations in a narrative flourish. I was worried that new puzzler QV wouldn’t have that exciting hook to set it apart in a thoughtful genre, then around an hour in I was chased by a penguin with a bright blue mohawk.

Our protagonist Quby is one of the final members of a tribe dedicated to maintaining balance between dimensions. By using her power over portals and a big magical paintbrush, she’s been tasked by her mother to go to the ruins and solve some puzzles to restore order to the gates. It’s a simple story (which is noticeably poorly translated from the start)  but one that serves its purpose to propel you from level to level opening exit gates.

Each isometric stage has a switch you’ll need to stand on to open the portal to the next level. To activate this dimensional gate and escape though, you’ll need to navigate mazes of pushable boxes, doors and rivers. With checkpoints available if you push an important box into a corner, you’re able to use a little trial and error to escape each stage. 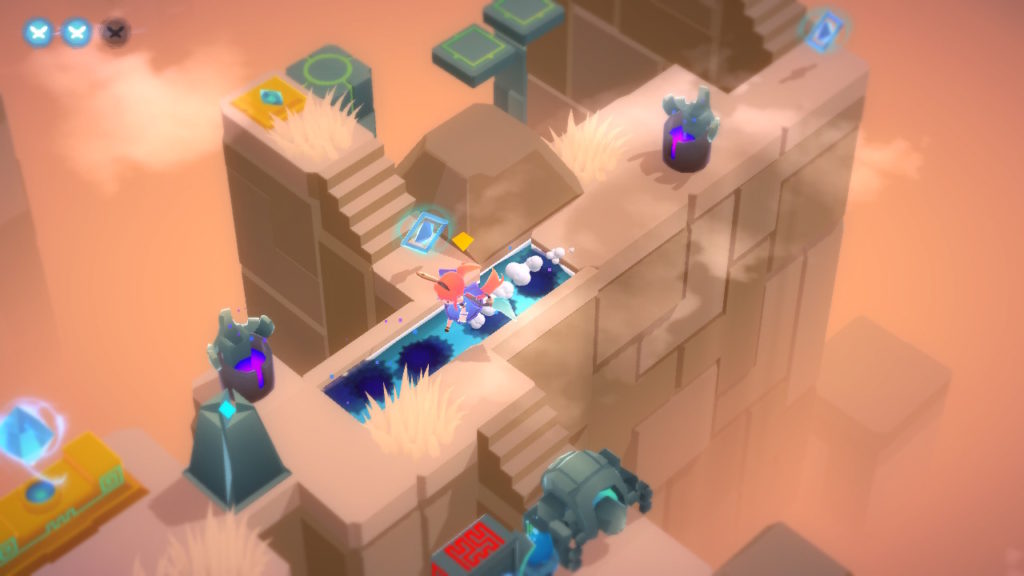 Quby’s main power is in her oversized paintbrush, which she uses in a variety of non-decorative ways. Solid doors can be painted to become archways you can walk through, or you can draw a portal on them to teleport yourself and objects to a corresponding wormhole about the stage. You can also dip your brush in mysterious ink pots, which enable you to splash paint over bodies of water so you can walk across them in a straight line. All these elements are introduced at an ideal pace, so there’s no chance of you getting overwhelmed.

Six themed dimensional worlds stand between Quby and success, each with their own set of obstacles. The desert world has huge golems that move to put fires out if you start them, whereas the fire world is a mess of conveyor belts that really test your understanding of a level. The Jungle where the penguins are introduced was definitely my favourite though. These aggressive little birds require you to stealth your way from puzzle to puzzle, attacking you on sight. A penguin’s outfit isn’t just a stylistic decision made by the Arctic inhabitant, but also dictates how it will act towards other penguins. Street punk penguins can be kept busy by letting a police officer penguin approach and shout at them. Don’t let the uniform fool you though, one look at Quby, and that cop will rush over to beat her to the ground.

Not everyone in the world of QV is so violent though. An owl named Barron can be found in a few levels, minding his own business. After a few encounters (including one where our “heroine” pushes him off a cliff to encourage him to fly) he eventually joins the party for the latter half of the game. From then on you’ll be playing as both Quby and Barron, switching between them to solve puzzles. Barron can’t use the power of the paintbrush but is ideal for weighing down a switch or two. The only downside to having both characters is that they both need to reach the exit to proceed. This is worth keeping in mind as I failed many a level by leaving Barron behind, with nobody there to open a portal to the goal for him. 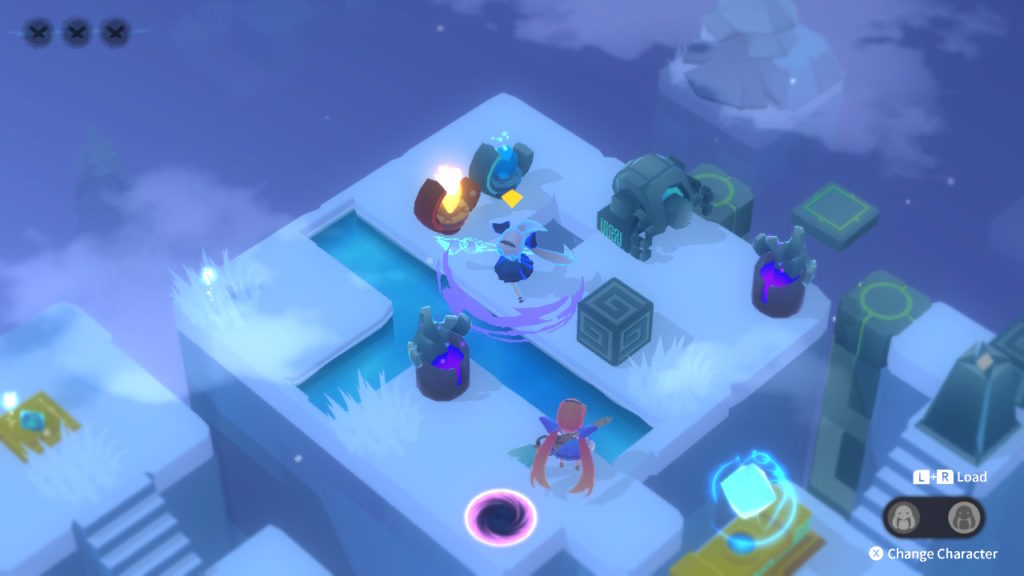 There are 8 stages in each of QV’s 6 worlds, and with each only taking a handful of minutes you’ll reach the end of the game relatively quickly. Fortunately, if you’re left wanting more, each stage has 4 difficulty settings, which are essentially completely different puzzle layouts. Each level also has 3 dragonflies to collect, giving you more to do if you haven’t warped through enough portals yet.

As you’re sat around pondering puzzles, you’ll be accompanied by a vibrant art style. The bright colours really bring the stages to life, and mean there’s no chance you’ll struggle to differentiate objects from one another. I often find myself really needing a relaxing soundtrack to keep me focused on puzzles, and QV provides that too. The chilled out tunes are the perfect background noise to help stave off the frustration. 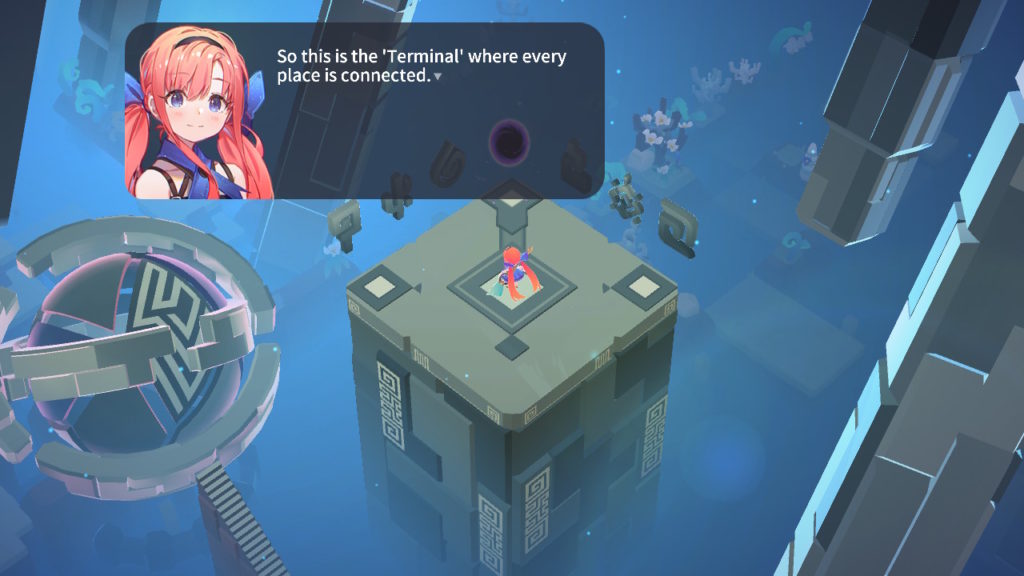 Although it’s easy enough to control everyone in QV, I did feel like everyone moved just a fraction too slow. There’s a run button to boost your speed if you need to hurry past an obstacle, but I could barely tell when I was pressing it. It’s not the biggest problem in the world, but when you’re repeating a level because you botched a puzzle it’s definitely irritating.

QV is an engaging puzzle game, that adds new elements to keep the gameplay fresh from start to finish. It’s not the most groundbreaking game you’ll play this year, but if you’re looking for a comforting brain teaser to think your way through you could do much worse than this interdimensional adventure.

Movement is just too slow
Translation is poor

QV is an enjoyable puzzler packed full of content. If you can cope with the slow paced movement, it throws enough new obstacles at you to keep things fresh from start to finish.