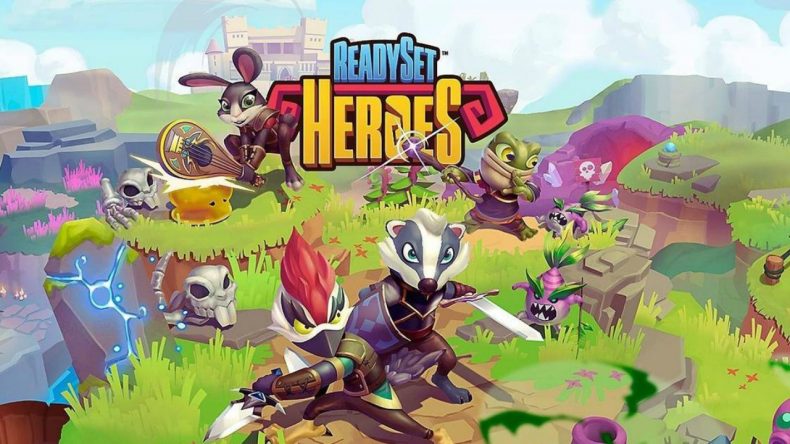 You know, I really don’t like it when a game isn’t good. It makes me feel bad knowing that a team of people created something that with all the good will in the world doesn’t quite hit the mark. Sometimes you come across something that it is just cynical, trying to quickly cash in on a passing fad, but most of the time it is clear that the ideas and execution don’t meet up. ReadySet Heroes earnestly wants to be a good game, and there is a fair bit that I do like about it, but objectively speaking, it is not a game I can recommend.

Robot Entertainment’s game pitches itself as a fast-paced multiplayer dungeon crawler that “packs a big twist”. But it is, in reality, barely any of those things. Pitched as a party game, you can play locally with up to four other players in split-screen, or if that doesn’t take your fancy there is also an online element where you can play with another three players. Once your team is assembled you are thrust into randomly generated arenas where you must fight through waves of enemies. After successfully completing every five arenas or so you will encounter a boss fight, until you reach the final level. The twist is that while you are fighting your way through the various arenas, other teams are doing so as well and upon reaching the final boss you will battle it out with them also. Sounds cool, right? Well, in truth it might be, but unfortunately in my experience that has not happened, and I suspect that is for a number of reasons. Online multiplayer is a great idea for this sort of game, however every attempt I made to connect to other players failed. I spent upwards of twenty minutes waiting for players to join me, often with little or no success. When I was successful and one solitary player joined me, the connection was poor to the point of being unplayable and I had to quit out to begin searching again, to no avail. Player population could have been a factor of course, so there is always the local play option, providing you have some friends.

If you don’t have friends you can play on your own, but it is pretty miserable. After choosing your character from a roster of six available, each with absolutely no difference between them, you launch into the game. The levels are randomly generated so you will face a mixture, from arenas where you just have to clear the enemies, to obstacle courses and levels with some minor puzzle solving to complete. You will have to work this all out for yourself though as there is nothing by way of a tutorial to explain any of it, not even a prompt advising you how to attack or dodge – it is R1 by the way! Defeating enemies and smashing barrels will net you some sparkly gems that you can pick up, their purpose never clearly explained. Initially I thought there were a kind of currency that I could use to upgrade my character, unlock a new skin or even equip it with different equipment, but that isn’t the case. Instead, it seems that the gems are attributes that are applied to you character as you play, things like movement speed, defence and attack. You never see how these are distributed though, not until the end of the game where they are used as a means of identifying which player was the best. Upon successful completion of a level you are awarded with “Treasure Time” which will provide you with some randomly generated loot that in theory improves your character. The loot ranges from better armour to a new weapon, a piece of equipment or a spell. Much like everything else there is no explanation as to how to use the new gear, it took me a considerable amount of time to even realise that the weapons I was picking up had a secondary attacked achieved by pressing and holding the attack button. Furthermore, there is nothing to help you distinguish between different pieces of equipment other than a colour code and items being marked as Common or Rare. Presumably rare items are in some way better than a common one, but what is there to distinguish between two common items, is a lute a preferable weapon to a sword and shield? Who knows!?

The lack of meaningful information to explain how to play the game is frustrating; however that feeling is compounded further by some incredible input lag. Attacking enemies feels clunky, but you can find a cadence to it after some practice. Dodging attacks isn’t as responsive as it should be either in a game like this, in part because each attack has a set pattern that needs to be completed before you can perform another action. Similarly, casting spells should be a fluid process but it isn’t, with a bizarre and inaccurate directional cone of attack that seems to operate in a strict quadrant that results in you often casting your spell in entirely the wrong direction. Death comes often as well, initially because you don’t know how to attack, or roll. Then you need to overcome and learn the cadence of each weapon, anticipate the input lag and watch out for the overly long animations. In total you have three lives with your character able to take a certain amount of damage before losing one (presumably your health increases if you collect more of the relevant gem, but there is no way of telling), and no way to recover any health unless you are blessed with a RNG health potion, which do not spawn often.

Ready Set Heroes does have potential. I like the idea of a quick dungeon-crawler brawler with friends, and the multiplayer competitive element does add something different. Visually the game is charming, with a cast of sweet-looking woodland characters to choose from, but I fear that despite its attempts to be a simple game anyone can play it relies way too heavily on the player having some experience with video game language in terms of how to play. Things like dodging, secondary attacks, and character improvement shouldn’t be things that the player has to work out for themselves in something pitched as a fast-paced, easy-to-play game. If they are then it runs the risk of putting the player off before they even get started.

Ready Set Heroes has a good concept, but the execution doesn't match up to the ideas with an over-reliance on the players familiarity with in game language, combined with unresponsive controls and frustrating gameplay

We’ve Got 200 Orcs Must Die! Unchained Beta Keys to Give Away! [ALL GONE!]