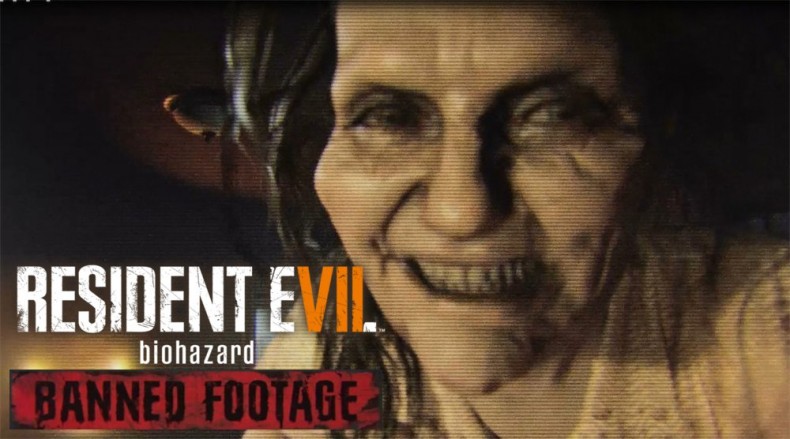 Resident Evil 7 is a stunning game, one of the best horror experiences in years. With more story content due in the spring, for free no less, you might be forgiven for thinking that the paid DLC would enhance the story even more. Well, it kind of does, but not in a particularly meaningful way, especially as the focus is mostly on Clancy Jarvis, the protagonist of the Beginning Hour demo. A strange choice to say the least.

It is nice to see a game’s season pass delivering content so early at least, but in Banned Footage Vol. 1, that content barely even registers as part of the Resident Evil 7 experience. It comes in three parts: Bedroom, in which you must escape the titular bedroom without tipping off Marguerite; Nightmare, a survival game that plays on the action-oriented gameplay of the main game’s final hour; and Ethan Must Die, a brutally difficult minigame with rogue-like elements.

Now, three whole episodes does sound like great value for your £7.99 (or as part of the aforementioned season pass), and some of it will last a decent amount of time, but the actual content is pretty threadbare. Bedroom is easily the best of the episodes, and the one that feels most connected to the main game and its atmosphere. After his filming companions are brutally murdered by the Bakers at the end of the demo, we now find Clancy is being held captive in the master bedroom of the Baker house, shackled to the bed. Marguerite Baker brings him some food, the cheer in her voice not even slightly masking the sinister undertones, but once she leaves the room and Clancy forces open his restraints, the escape attempt commences.

This episode is one big puzzle room, its high quality fitting nicely alongside a certain VHS tape found later in the main game, and it is dripping with atmosphere and dread. It also feels very much like the classic puzzles from the original Resident Evil games, complete with the cryptic clues and painting arrangements. Time is against you in Bedroom, as making too much noise will cause Marguerite to come check on you, and if she finds you out of bed, you are not going to like the end result. Simply getting back into bed isn’t enough either, because if your captor finds anything out of place, things get very messy for poor Clancy. The panic that sets in when you know that Marguerite is on her way and that painting is in the wrong place, or like me, you forgot to put the lantern back on its hook in time, it’s the closest feeling you can get to the horror of Resident Evil VII proper.

It took me around an hour to finish Bedroom, after a number of failed attempts, and beyond searching for hidden collectibles, there really isn’t any reason to play it again. It feels more like a VHS tape that was originally intended for the main game, rather than extra paid-for content. Despite its quality, more intelligent people than I (not difficult to find) will likely finish the episode much quicker. Next up is Nightmare, which sees Clancy captured once again, and Jack Baker is sick of his shit, so Clancy is locked in the basement. For some reason, he is given access to scrap-generating machines that will help in the crafting of items and weapons. Put simply, Nightmare is like a cross between Call of Duty’s Zombies mode and Five Nights At Freddy’s, as you’re tasked with surviving the night against the horrors lurking in the basement.

This happens on an hour-by-hour basis, with each hour throwing tougher and tougher enemies at you as dawn approaches. As you have probably guessed, this is an action experience, far removed from the terror for which Resident Evil 7 exerts so well. You are forced to survive by generating scrap, and using that scrap as currency to buy and upgrade weapons, items and yourself, for some reason. How scrap materials help Clancy to improve his overall health, I will never know. Video game logic, I suppose.

Nightmare is not designed to be finished on your first attempt though, and how well you do determines how many points you finish up with. These points are used to purchase permanent upgrades that will be carried into each subsequent survival attempt. Although it doesn’t necessarily lower the difficulty, it will at least help you to survive that little bit longer and, hopefully, allow you to live through the night. The final part of Banned Footage Vol. 1 is Ethan Must Die, a rogue-like minigame that tasks you with completing an objective, but in the most extreme of circumstances. The difficulty is turned up to eleven (or perhaps twelve, maybe even thirteen or fourteen) as you are equipped with only a knife and your luck, as pick-ups are completely randomised. Item crates appear in the world, again at random, and their star rating tells you how good their contents may be. Smashing them could result in a new weapon, or perhaps just a crafting item…or an explosive that will likely result in instant death.

See, death is like Dark Souls in this new mode. Ethan will be transported back to the beginning, only a knife to his name, but a statuette will remain at his last point of death. Smashing that statuette will return at least one of the items you had when you died, but dying before reaching it (and you will die, a lot) will result in that statuette being lost forever. There honestly doesn’t seem to be any real point to this episode, and only the most masochistic players will get any enjoyment out of constantly being killed in one or two hits, so it’s hard to say where the idea came from or how it even remotely connects to the main title. Unless it’s to convey how the Bakers went crazy in the first bloody place. Maybe I’m just overthinking it.

Despite the quality of Bedroom, and to some extent Nightmare, this first DLC pack doesn’t really enhance the Resident Evil 7 experience at all. It feels like a mish-mash of cut content and silly minigames that may have suited the old games, but feel totally out of place in this new era.

Although Bedroom is interesting, Nightmare and Ethan Must Die are nothing more than throwaway minigames, resulting in an underwhelming DLC pack that doesn’t live up to the Resident Evil name.