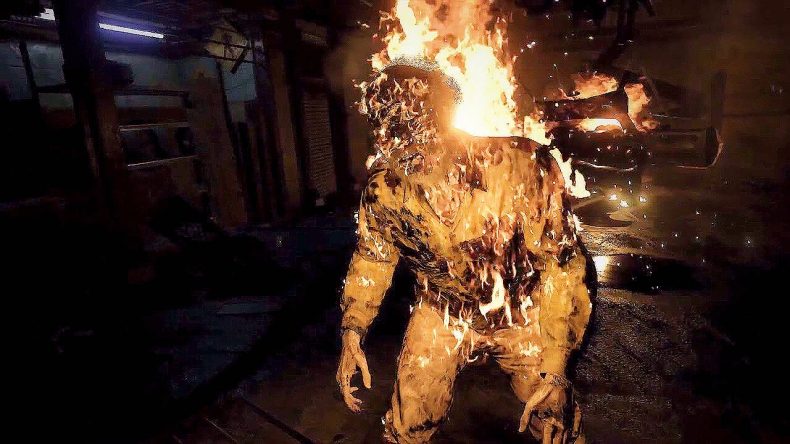 Resident Evil 7 is still my top game of 2017 so far, with its spectacular mixture of old and new elements, that breathed new (un)life into a series that was way past its best. The threatening atmosphere of the Baker property saw the franchise return to the claustrophobic horror seen in the very first game, essentially rebooting the series by bringing in new characters and finally moving out of Albert Wesker’s shadow.

Needless to say, the list below may contain a few spoilers for Resident Evil 7, so if you have yet to play it, then consider yourself warned. Also, get playing it, silly.

Resident Evil 7 still has two more DLC chapters left in its item box: the free Not A Hero chapter focusing on Chris Redfield, and a mysterious premium chapter about which we know absolutely sod all. That will probably remain shrouded in secrecy until the delayed free DLC is finally released. Whenever that may be.

But what do we want from these new story chapters? Read on to find out.

Clearly this was always going to be the most important item on this list. While RE7 could still be taken as a standalone story within the world of Resident Evil, it still left a lot of unanswered questions. Some are best left that way, keeping a sense of mystery, but others are too big to leave open to interpretation.

Who was Lucas working for? Was the Mold linked to the Uroboros strain from RE5? Why was Chris Redfield seemingly working for Umbrella?

These questions (and more) aren’t all likely to be answered in DLC, they’re probably for the next game in the series to handle, but surely some need to be answered, especially the Chris stuff. Where Chris has been since RE6

Speaking of Mr Redfield, where has he been in the years between RE6 and the events of 7? There are hints that he knows of Lucas’ involvement in the whole Eveline saga, but will we find out why in the Not A Hero DLC?

And what’s the deal with him rocking up in an Umbrella helicopter? Has Umbrella been reformed, or is he undercover somehow?

And what the heck happened to his muscles?

As I mentioned earlier, this new game could really be a standalone story, but it does have a few links to the old games. There are a few files dotted around that mentioned Raccoon City and even Umbrella (and possibly Tricell, if I’m right about the redacted stuff about Eveline), and if my theory is correct about the Mold’s similarity to Uroboros, that could well explain Chris Redfield’s involvement. It would also give Capcom a reason to bring back Sheva Alomar, the hugely underappreciated character from RE5. Please bring her back. It’s criminal that she’s only been in the one game. Especially when Rebecca got her own game – she’s never been a good character.

These links should be built upon for the DLC, and some will certainly be touched upon in Chris Redfield’s chapter. I enjoyed fighting the Molded, not to mention the Baker family, but hopefully we’ll see some variation in enemies for the two new chapters. Maybe we’ll see the return of traditional zombies, or the trademark BOW style of the old games?

Even greater focus on scares

The best thing about the franchise’s return was the increased focus on atmosphere and dread. The Nemesis-like chases with Jack Baker could happen at any moment, and the Molded had a nasty habit of showing up at the worst times. But the final section upped the action a bit too much for some people, so perhaps Capcom will take that feedback and turn up the scare factor for at least one of the DLC chapters.

Hell, remember how atmospheric the Beginning Hour demo was? Just give us that again, dialled up to eleven.

Other than a handful of shadow puzzles and that impressive, Saw-like episode in Lucas’ testing area, Resident Evil 7 wasn’t exactly chock full of brain teasers. It was certainly an improvement over the almost total lack of puzzles in RE 4-6, and the Bedroom episode of the Banned Footage DLC showed just what the game was capable of, in terms of taxing the player’s brain in an entertaining and terrifying way.

Survival horror is obviously the main point of Resident Evil, but puzzles were a huge part of the early games, and hopefully at least one of the new DLC chapters will offer a good riddle or two.

Looking to the future

Finally, with rumours circling of a third Revelations game, not to mention the inevitable Resident Evil 8, these proper story DLC chapters might well hint at what’s to come. Much like a Marvel movie’s post-credits scene (or scenes, depending on the movie), there could be a teaser for the next instalment in the Resident Evil series.

Whatever we get from the free Not A Hero and the as-yet-untitled paid DLC, it will be great just to get more story content for one of this year’s best games. It will certainly be nice to see whether that really is Chris Redfield, or if the crazy fan theories have any weight to them.