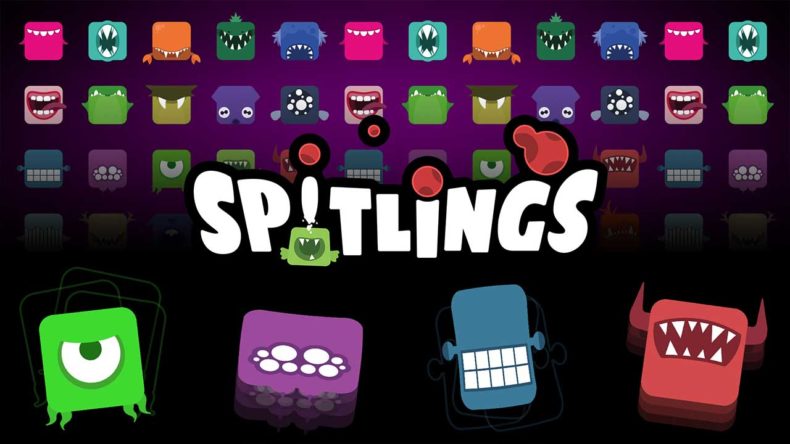 Throughout gaming history there’s no shortage of cute little blob monsters. Especially in the days of the NES, a charming unassuming blob was often the first enemy you saw, and the limitations of the time made for simple but delightful foes. It’s hard to imagine a world without Mario’s iconic Goomba or the adorable Dragon Quest Slime. Not all stubby round critters are inherently evil though, and the co-op arcade game Spitlings is here to prove that.

In Spitlings you play as one of the titular toothy terrors, in their quest to descend a skyscraper full of slime (at least I think that’s what the comic strip introducing the story mode was trying to indicate). This means completing single screen stages by destroying any slime littering the area. There’s only one way to dispatch of this toxic gunk, spitting your teeth at it of course.

Firing teeth is the central premise of Spitlings, and doubles as both your attack and propulsion method. Teeth can be spat upwards to attack an enemy, or downwards to launch you off the ground and serve as your jump. Each Spitling is limited in their offensive capabilities by the number teeth in its mouth, and if you run out you’ll need to collect them back up or take a moment to stand still and regrow them. If Spitlings weren’t so adorable, this would be particularly nightmarish. 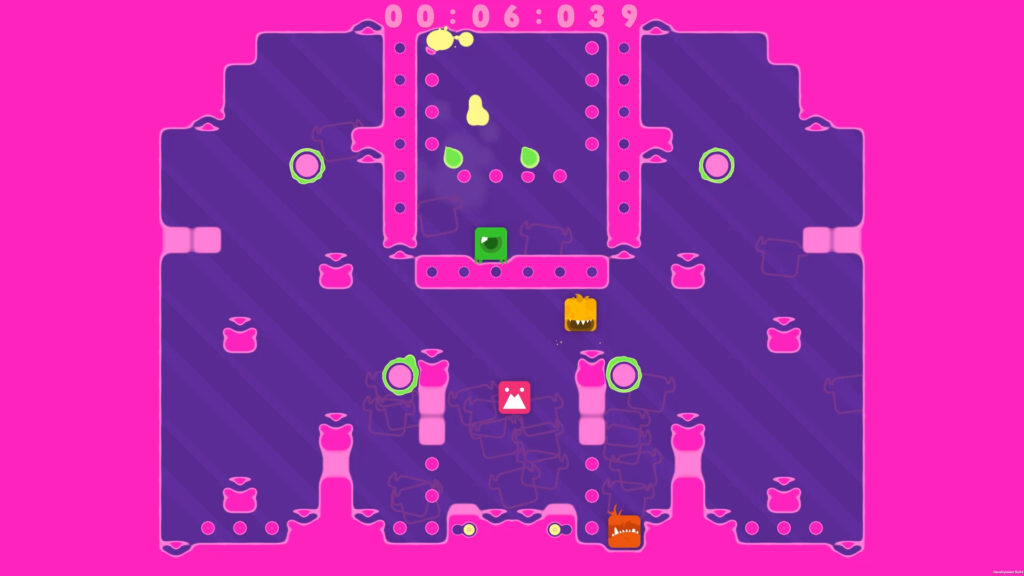 The most common foe you’ll find in Spitlings is a bouncing ball of slime that splits in two once you tooth it. As upward motion isn’t as easy as pressing a jump button, this means you’ll almost immediately have to learn to let the blob bounce over you and then pepper it with your bony bullets. I wish there was a bit more variety to the foes, but they are fun to fight. Once you’ve got the basics down there’s more advanced tricks you can use too, such as using the teeth that pop out when you kill the smallest size blob to cause a chain reaction. Little is more satisfying than firing a tooth that causes a chain reaction of dental death.

Each level is made up of a single screen, with a number of obstacles to maneuver around on your quest to purge the world of goo. There are simpler elements like spikes and jelly walls you can swim up, to blocks that when hit set off chain reactions and rain teeth from above. Because of these different objects, the stages feel really varied.There are levels with a platforming focus, level full of enemies, and even more thoughtful puzzle levels.

As fun as the levels are to play alone, Spitlings is an absolute blast with your friends. Up to four of you (locally or online) can choose an adorable monster and spit your way to victory together. The main conceit of playing co-op is that if one of you dies then you lose the level. This means that more players definitely doesn’t mean you’ll have an easier time slaying the slime. 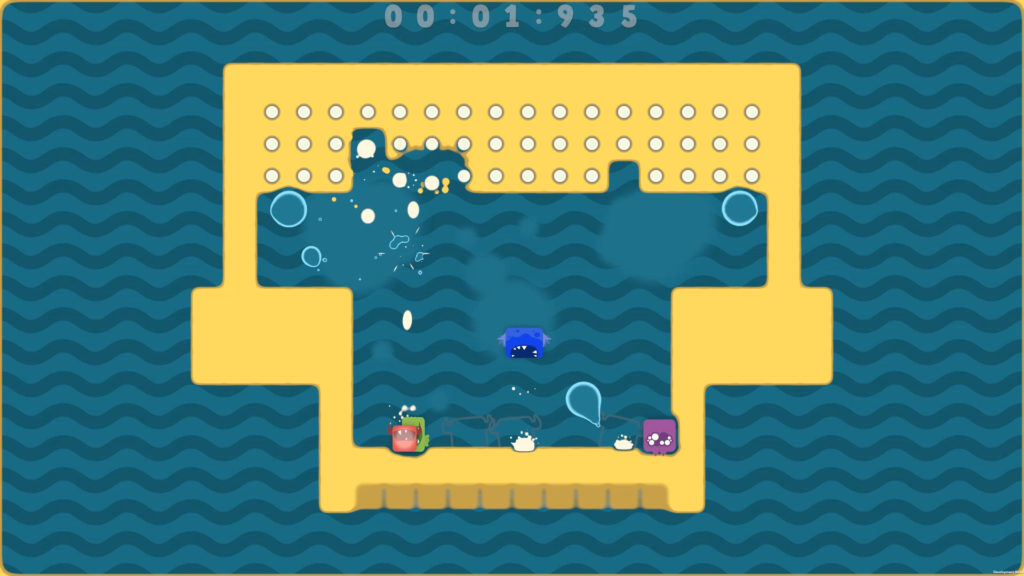 Each set of levels you complete rewards you with a new Spitling. With 100 of them to collect, there’s a great range of characters with something for everyone. There are buck toothed Spitlings, fanged Spitlings; there’s even a Spitling with long whale teeth. I love the design of these little guys and would love to amass a physical vinyl collection of them, they are such charming little oddballs.

Outside of beating the story and gathering new fanged friends, there’s also a party mode to enjoy. In this mode you can select levels, difficulty and some mutators to change up the game. The easy mode especially seemed like a great concept, with no punishment for death for newer players to enjoy without difficulty pressure. Post campaign Spitlings is set to get even better in the near future, with a level editor on its way.

Spitlings is an enjoyable arcade romp made even better with a buddy or two. The Spitlings themselves are so endearing, and the level design is diverse. It could do with a bit more enemy variety, but if you have some competent friends to play with locally or online you’ll have a great time busting slime together for a few hours.

Fun arcade style gameplay
Great fun with friends
The Spitlings themselves are adorable
Lots of extra content, for players of all skill levels.

Spitlings is good old fashioned multiplayer arcade fun. Enjoyable solo or with friends, this toothy adventure is full of fun.