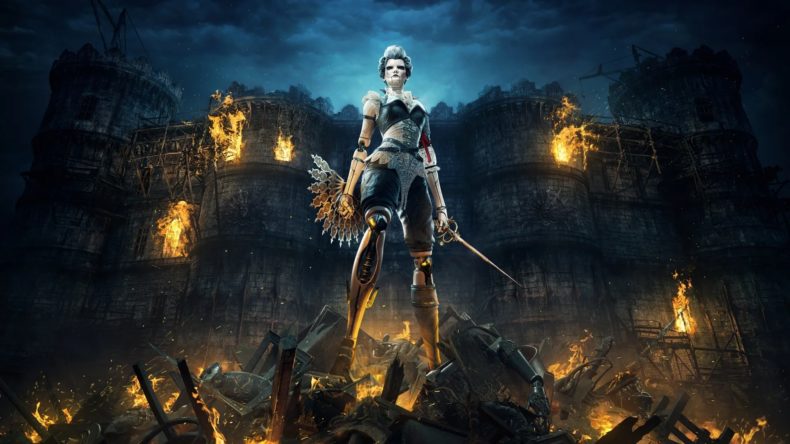 Having spent several years banging the drum for French developer Spiders, I feel nothing short of vindicated by Steelrising. While I didn’t really fall in love with their last RPG, Greedfall, until the PS5 upgrade, Steelrising had me from the get-go. It’s a sterling Soulslike which may not re-write the rulebook, but which certainly feels like its own take on the genre rather than just another try-hard.

Set in a fictional version of 18th Century Paris, you play the role of Aegis, an intelligent automaton designed to battle other machines through the besieged city and beyond. Amidst a civil war stirred up by both political and religious conflict, Aegis is despatched by the Queen of France to seek out key figures who might right the course of the Kingdom if they can be rescued and brought together. Unfortunately, the cities and countryside are infested by killer machines that will attack and slaughter anything in sight. 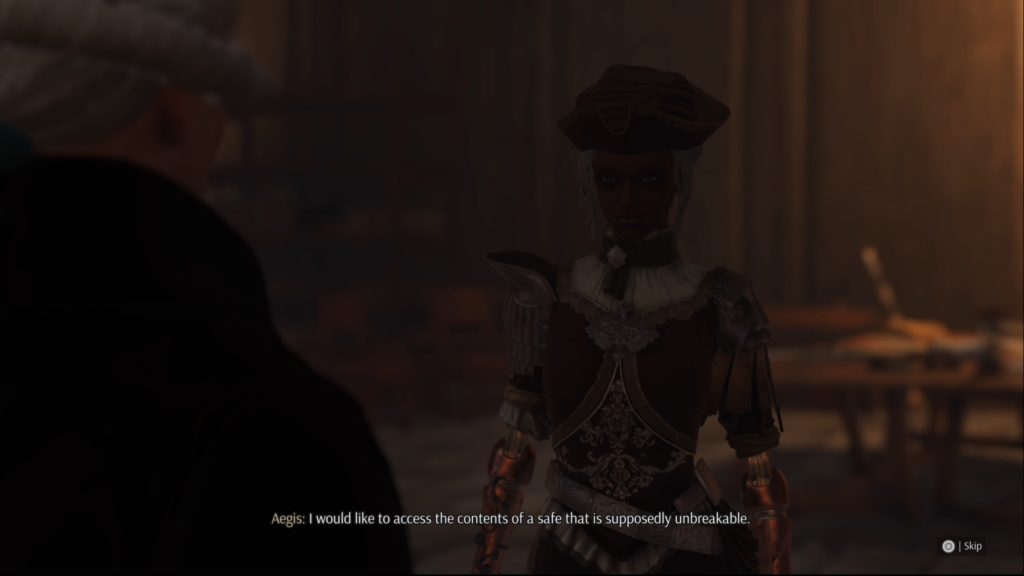 Story plays a big part in Steelrising but – while it’s nice to have a solid narrative to follow instead of having to rely on flavour text and cryptic cutscenes – the plot isn’t all that thrilling. As is a Spiders trademark it’s quite a talky game, the action broken up by a lot of cutscenes and dialogue which further the story but can become a little tiresome. It doesn’t help that nearly every character other than Aegis is a middle-aged dude in a powdered wig, all with very similar voices and French names that don’t easily adhere to memory.

It’s a simple thing to get lost down a rabbit hole of political waffle that’s delivered with genuine pathos by the cast but which begins to blur together after a few conversations. By midway through the game you’ll have assembled a rogue’s gallery of French aristocrats, politicians, and clergymen, all of whom butt in on one another’s conversations and like to pepper their dialogue with random snatches of French the way they do in Assassin’s Creed. Without subtitles you’ll miss half of it.

Still, the focus isn’t the story, and it’s nice to have some context to what you’re doing. As with Bloodborne, having a specific place to ferry people to gives you a constant sense of escalation and achievement. As the Convent fills up, you know you’re making a difference somewhere. In the meantime, the main goal of Steelrising is to free the aforementioned dignitaries from the control of the mad inventor responsible for the machine scourge. The main bosses, referred to as Titans, are controlled by some kind of alchemy that requires a human mind to power. Your job is to find the Titans, destroy them, and free their symbiote. 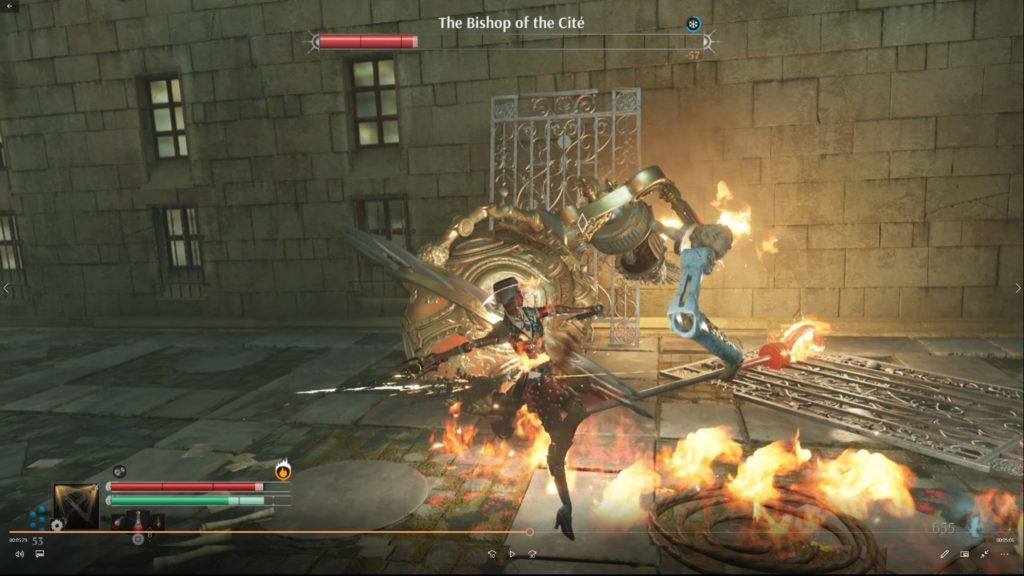 Initially, combat took me a while to click with. Aegis is a machine, after all, and moves like one. Her movements are quick, responsive, but there’s an economy to her gestures that feels, by design, inhuman. As is by-now standard, combat is a mix of melee and ranged attacks, with stamina-management preventing abuse of the dodge button.

Interestingly, Aegis’s stamina, or energy, is depleted by over-heating, at which point she’ll be unable to move or attack. You can force-vent her heat, restoring her energy at the cost of a build-up of potentially crippling frost damage. It’s a nice touch that keeps you moving but forces you to weigh the benefits each time. Especially as you’ll be dodging most attacks unless you pick a weapon with a parry and counter-attack as its secondary ability. Some weapons have a built-in shield, others have offensive special attacks.

Aegis can have two equipped at a time, though I can’t imagine swapping out the first pistol for anything. Not only does it allow you to deal ranged damage and occasionally stagger an enemy, it will apply a build-up of frost damage which will eventually freeze an enemy for a few seconds of free damage. With enough ammo (which you can easily purchase at a rest point), it can even render bosses less of a threat. 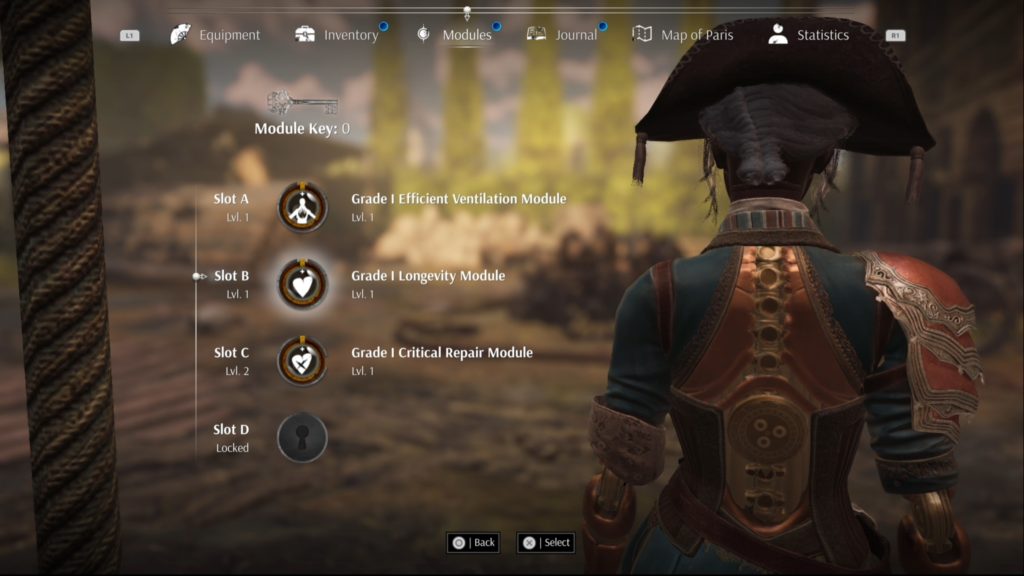 In fact, that’s kind of a theme with Steelrising. While it is a challenging game, it’s nothing like other Soulslikes in terms of difficulty. Most bosses took me no more than two or three tries (I actually had more trouble with certain enemies, like the skinny bastards who swing weights on the end of ridiculously long chains), and often finding my way around was tougher than dealing with the automatons trying to kill me.

A lot of Steelrising takes place in similar-looking burned-out cities and grand maisons, so it was difficult to even remember where I’d seen a certain impassable barrier when, later, I found the tool to unlock it. You can fast-travel between open areas, but once you’re there you must navigate from rest point to rest point, called Vestals, by memory. With multiple shortcuts and side routes it’s easy to get lost.

You’ll unlock three main means of access as you defeat Titans. The first is a grapple that can pull Aegis to specific points, the second is a mid-air dash to cross greater distances, and the third is a battering-ram kick to knock down weakened walls. The MetroidVania vibe is strong as you pass these barriers in the earlier game only to return later and loot whatever lies behind them. There’s a decent array of weapons to find, from rapiers and bladed fans to huge hammers, halberds, and claws, while armour sets are scattered around that affect several of Aegis’ stats. 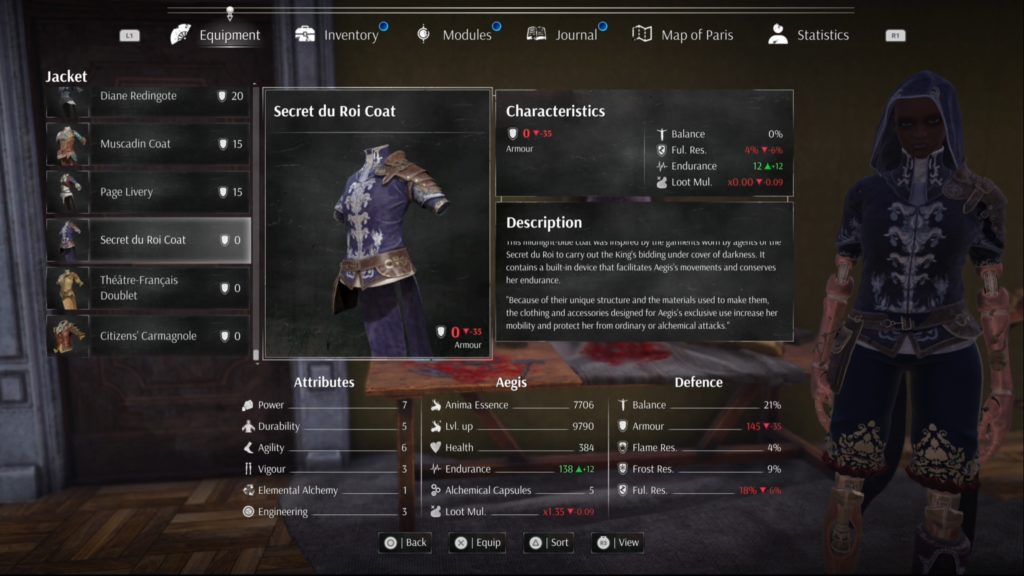 From endurance and vigour to balance and alchemical affinity, there’s a lot of ways to build Aegis, but I found none to be particularly more useful than others. Obviously higher armor is handy to have, but balance and alchemical resistance is often more important as Aegis is effected by elemental build-up just like her enemies. You upgrade both Aegis and her weapons using Anima, the soul currency dropped by enemies – though for the latter you’ll also need increasingly rare materials. You’ll also find module keys and module upgrades which adjust Aegis’ intrinsic abilities by boosting her recovery, or adding health regen to her critical hits.

One addition to Steelrising that’s rarely – if ever – seen in a Soulslike is the Assist Mode. With this enabled you can adjust the difficulty of the combat at the cost of Trophy or Achievement progress. There are multiple ways to adjust the challenge, from altering damage modifiers to removing the loss of Anima on death. Some may be offended by its mere inclusion, but no is forcing anyone to use this mode and it will undoubtedly make the game much more accessible to more casual or less skilled players.

There’s a lot to see and do throughout Steelrising, with an ever-growing pile of side objectives and something worth picking up round almost every corner. Spiders waste very little space by shoving a chest or collectible down side alleys and up on balconies, with multiple routes and shortcuts to unlock as you go. It’s just a shame there isn’t a little more colour and variety to the locations.

Spiders seem to have learned lessons from their own history here, fashioning a game that feels derivative of the wider genre but unique for a number of reasons. The protagonist is interesting, an automaton bred for battle but forced to make decision she is ill-equipped to make by the simpering, bickering aristocrats she rescues. And the steampunk world is interesting too, even if it does need a little more dazzle with its razzle.

Above all though, Steelrising is an engaging, exciting Soulslike adventure set in a world that’s fun to explore at your own pace and comfort. Next to Greedfall, it shows just how much Spiders has come on as a developer. There are some kinks for sure, but Aegis’ Parisian adventure is easily Spiders’ best game to date.

Level design can be confusing
Needs a little colour

Next to Greedfall, SteelRising shows just how much Spiders has come on as a developer. There are some kinks for sure, but Aegis’ Parisian adventure is easily Spiders’ best game to date.