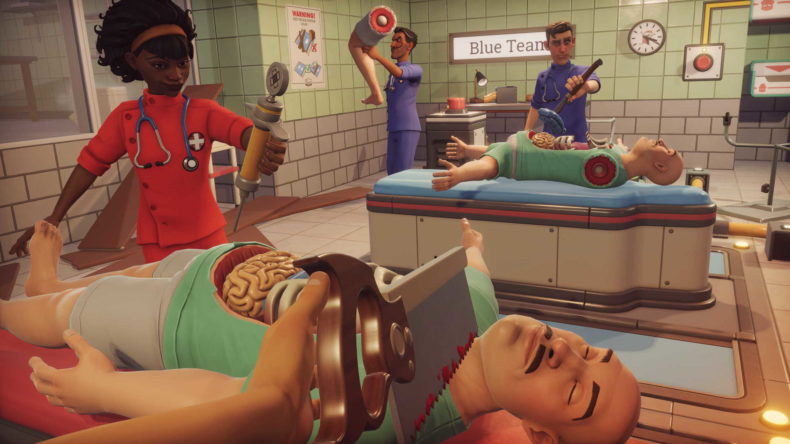 There is something inherently funny about a game that’s deliberately hard to play. From Octodad to Getting Over It, deliberately tough controls can make even menial tasks both difficult and potentially amusing. The original Surgeon Simulator was the perfect example of this. It was a basic game where you stood stationary performing (often botched) operations, with a wobbly hand and ridiculous physics based results. Surgeon Simulator 2: Access All Areas looks to expand on the original with multiple game modes and actual movement.

As well as a bunch of new mechanics Surgeon Simulator 2 also features a slightly sinister story. At a facility built to train anybody to be a surgeon, it becomes immediately apparent that not everything is as it seems. You’re guided through your training by the voice of Pam, but you’ll soon be getting to know other surgeons and uncover more about the facility as you hack your way to surgical victory.

Performing surgery is surprisingly straightforward, if a little brutal. Just use your hand or a tool, and pull or slice whatever organ or extremity you want to remove. Each patient (or Bob as they’re known) has a different poorly body part that needs replacing, but if you’re too rough and don’t try and keep blood loss to a minimum Bob will bleed out and you’ll fail at the level. There are a few ways to keep Bob clinging on while you operate, there’s a red syringe for filling him up with extra blood or a yellow one for stopping any current holes from squirting out that precious haemoglobin. 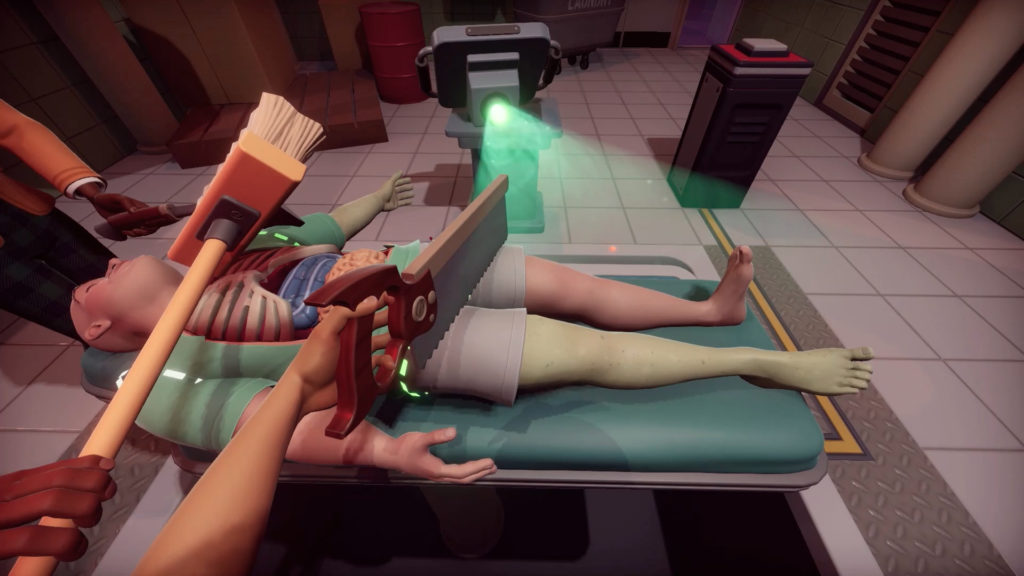 The tricky aspect of removing organs and healing poor Bob is the fact you have to use your floppy hand. You have a lot of control over your hand (with the ability to grab, twist and pull forward and back) but using it with any finesse is another story. Your limb is unwieldy at best, and it’s particularly easy to stab and remove a heart instead of the lung next to it. This can be pretty funny at first, but as you progress further in the game it does get a little grating. This is exasperated even more when stages require you to do more than just operating.

The addition of walking to Surgeon Simulator 2 might just be the worst thing about the game. The simplicity of standing and operating really made the first game special, and now you can walk around pretty much every stage becomes a game of hide and seek with a scalpel. The facility is incredibly messy, and you’ll spend more time searching for ID cards to open doors or operating tools. The further you get into the game the more you’ll be expected to do before getting to operate, and climbing through vents and dropping balls onto switches just isn’t the most engaging part of the game. 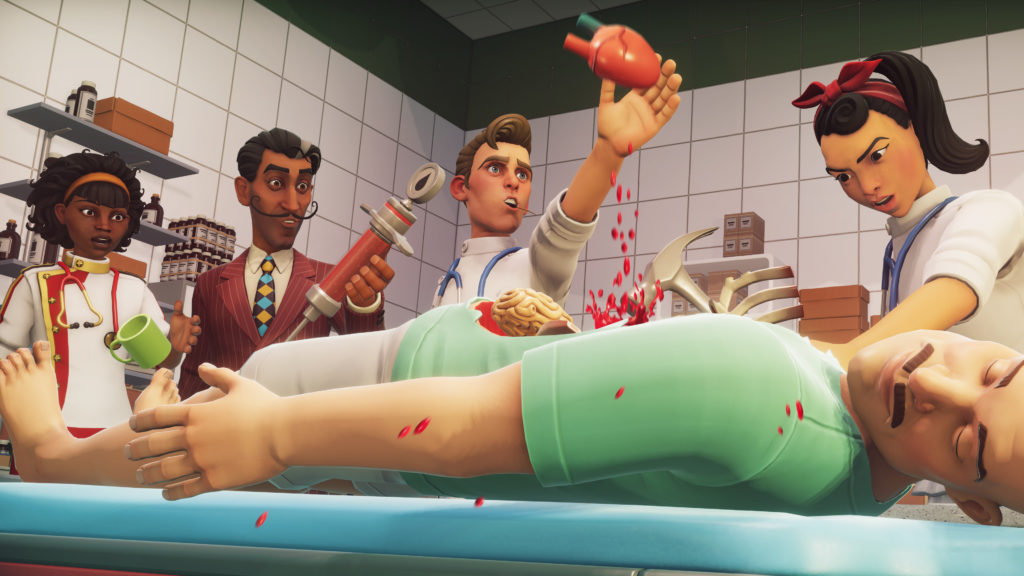 A lot of these issues are made significantly better when playing with a team. When you have 4 surgeons running around and pulling off limbs the game really becomes a chaotic and joyful experience. Just watching your teammates moving around holding a spare limb genuinely made me laugh a few times, and all of the fluff of navigating the facility becomes so much more tolerable when you’re doing it together.

Alongside the regular campaign stages, you can compete in Free-for-all arcade style levels or play community made content with a group. The user created levels are a ton of fun, and really creative. There are standard operations, games of flip the bottle, target practice with limbs and even puzzle filled dungeons. It’s really impressive to see how everyone has used the tools to make such interesting content, and it means you won’t run out of bodies to slice. 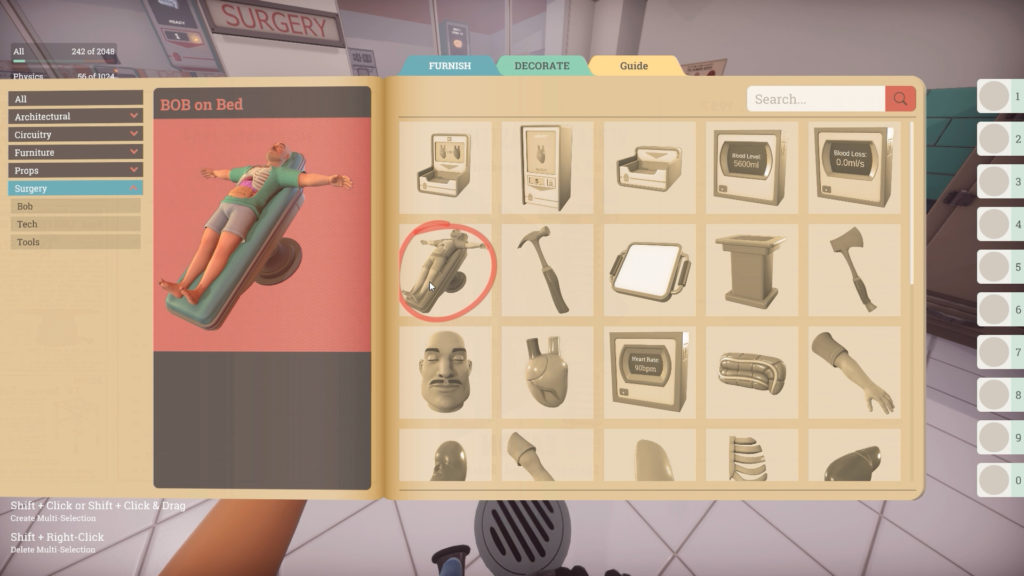 The creation tools are available in-game if you want to make your own levels, and are pretty painless to use. You start in a small room, and can place all manner of useful and decorative objects, paint the walls, and set different objectives and logic to the stage. I’m not nearly a creative enough person to make use of these tools in a meaningful way, but they’re definitely easy enough to use and can make perfectly functional and enjoyable levels.

When operating with your friends it’s important that you look your best, and fortunately Surgeon Simulator 2 has you covered. There are 4 base characters to start with, and plenty of clothing and accessories to unlock to make them your own. You get experience for playing and beating stages or completing daily quests, and can level up using a season pass type system for all sorts of great outfit options. I felt much better saving lives once I was fully kitted out in a disco outfit and teddy bear gloves.

Surgeon Simulator 2: Access All Areas is great fun with friends, but loses some of the simple charm that the original had. Playing find the keycard in rooms full of junk just isn’t particularly enjoyable, and the intentionally difficult controls just feel frustrating when you can’t pick something up. If you’ve got a group of buds though, there’s plenty of content to dive into and even more lives to save.

Controls are frustrating
Finding objects in messy rooms is dull

Surgeon Simulator 2: Access All Areas is a ton of fun with friends, but the ability to walk around takes away some of the simple joy of the original.