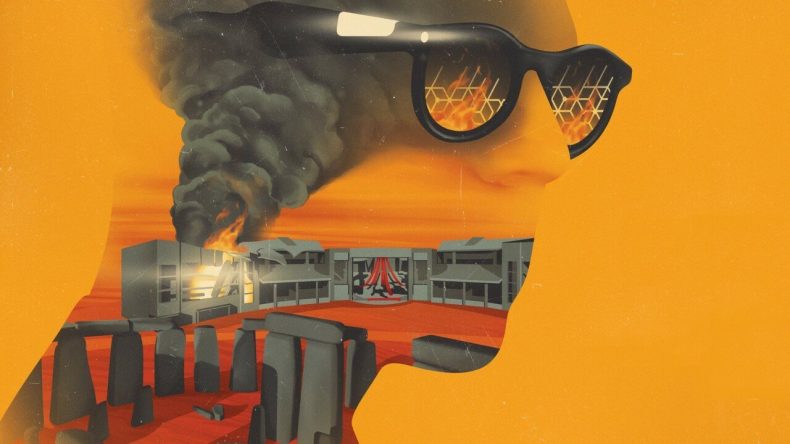 With games these days getting longer and longer, it can be refreshing to try shorter titles. Free from the padding, or the sense of slow or repetitive gameplay, smaller experiences often feel tighter. They don’t outstay their welcome and finish before they run out of new ideas. The Bradwell Conspiracy, from A Brave Plan, is one of those shorter titles. Running at just a few hours, and centering around a unique gameplay mechanic, it should be the perfect tonic to those sprawling sandbox AAA games that take 50+ hours to complete. Bizarrely though it feels both too short and too long at the same time.

The setting is a museum around Stonehenge, England, or more importantly what lies further down. An explosion sees you knocked unconscious. When you come to, the building is in a state of disarray and deserted. You only have your wits and your electronic Guide to help you navigate. Before long you’ll be hearing another human’s voice, but the respite is short-lived as your attempts to escape to freedom only see you plunged underground, further away from safety. You must find a way out, and you may as well kill two birds and figure out what happened here, right? The unique gameplay mechanic is essentially a really accurate portable 3D printer. It enables you to scan in blueprints and then replicate them with near-perfect accuracy using a malleable substance called, um, Substance. Once a blueprint has been added, you can recreate as many items as you have Substance, to solve puzzles and progress the story.

The limit on Substance is only the tip of the iceberg of arbitrary restrictions imposed upon you, seemingly just to create puzzles. Firstly, your character can’t talk, so they need to communicate with the human character you meet, Amber, via photographs. This means you need to take snaps of just the right thing to get Amber to help you out in the right way, which can be fiddly. You also can’t jump, meaning you’ll be printing plenty of Substance platforms to cross gaps, which can sometimes be agonisingly small. You also lose all of your blueprints and Substance as you progress to different floors of the facility for some arbitrary reason, too.

However, if all of these decisions resulted in a tight puzzle experience, I wouldn’t mind. But frankly, the puzzling never really leaves first gear. The majority of the time you’ll be platform building, and even those moments when you’re not, the puzzles never elevate themselves. The only exception is the last puzzle of the game, which actually has a sense of gravitas. But because the game ends after its completion, it only serves to highlight that The Bradwell Conspiracy stops before it really gets started in terms of puzzles. In this sense, I wanted it to keep on going, to have more to do, more fun ways to use the SMP, but sadly this wasn’t the case. What I am glad to see the back of are the technical issues that blight the experience. The frame rate drops at various intervals and becomes terribly jerky when there’s a lot going on. If you set off an alarm or some other significant happening, expect The Bradwell Conspiracy to almost freeze whilst it catches up with itself. I also encountered a problem whereby Amber’s support functionality seemed to time out. I’m not sure if it was because I was taking my sweet time with a puzzle, but after a while she just stopped responding to my photographs, like I’d been blocked on WhatsApp or something. I had to quit out and reload the previous save state, which meant more backtracking to catch up and ensure she wanted to work with me again.

It’s also worth noting the controls are incredibly fiddly. You have to place your intended printouts in 3D space, but more often than not having the right angle or perspective to get this right took far too long. It meant that even though I knew what I had to do, it took ages wiggling my on-screen printout until it went green. It meant the simple gameplay dragged on much longer than my patience could bear. This is not because the game doesn’t explain itself. The SMP has its own specific tutorial, voiced by Jonathan Ross no less, and it’s very clear in setting out its stall. The execution is what lets it down.

Ross’ inclusion is a pleasant one, mainly down to the well-written dialogue, which is a particular highlight. There’s a dry sense of humour running through most of it which feels real and engaging. Amber is also fleshed out as a likable character in her own right, and not just the voice of your help. The setting underneath the museum feels real and alive, before the explosion at least. You’ll find yourself getting more pulled into the story as you uncover more about the Bradwell’s secrets. The Bradwell Conspiracy doesn’t quite live up to expectations. After you leave the confines of the tutorial section, you expect the puzzling to ramp up and excite you. Instead, you’re left building bridges across gaps and not much else, apart from walking between said gaps. The SMP idea is packed with potential, but its utilisation feels restricted which limits its enjoyment and effectiveness. The story will keep you going to the end, and will likely be the thing you remember, along with Jonathan Ross’ dulcet tones. You also won’t forget the jerky frame rate you experienced throughout. Sadly, as such, this is a conspiracy that’s perhaps not worth uncovering.

There's a decent story to uncover here. but the puzzles and technical issues you'll endure to reach it will likely put you off.