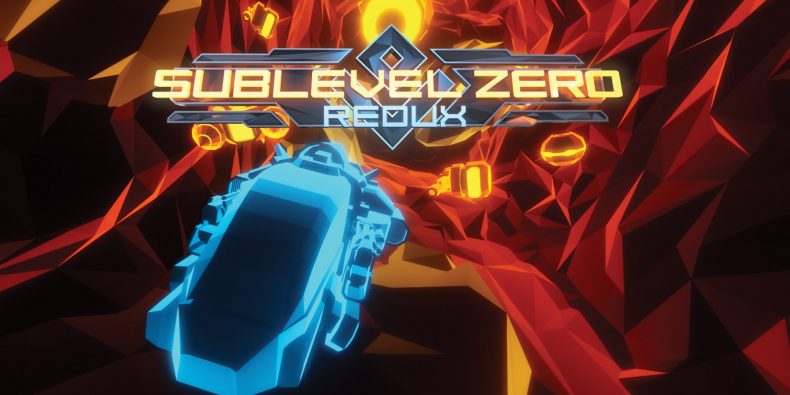 There are some genres of video game that seem to disappear for years, even decades, at a time. Fans of the Zero Gravity FPS series Descent, and the Nintendo 64’s Forsaken, were left in the 90s with very little to satisfy their niche itch. Sublevel Zero Redux aims to scratch that itch with a Roguelike twist.

Sublevel Zero Redux opens with a tale of a universe being destroyed by tears in space and time, and humans fighting to survive in this world. In a search for lost technology, your ship is sucked into an abandoned facility and leaving is not an option unless you gather all the flux engine parts you need. This means navigating each randomly generated stage and the hostile ships within, finding the reactor core, and destroying it for parts.

The facility is beautiful to look at, with bright neon colours coating the walls in a way that screams Sci-Fi. It’s a great aesthetic (which even carries across to the glowing lava-filled depths of the base) but it does sometimes make the small neon enemies a little tricky to spot. Flying through the gravity-lacking world of Sublevel Zero Redux definitely takes some getting used to. The standard FPS control scheme is simple enough, but when combined with vertical movement on the shoulder buttons and rolling 90 degrees left and right on the face buttons, it’s a steep learning curve. New to the Switch release are gyro controls, but they aren’t exactly useful (and I never got them to work particularly well) in such a fast paced and precise shooter.

After getting to grips with the controls, navigating the intensely neon levels and blasting enemies out of the air is an incredibly satisfying loop. It becomes immediately apparent that switching weapons regularly is crucial, as ammo quickly becomes an issue if you don’t switch between gun types. I found a smartgun to be a necessity as I focused on dodging enemy fire, but bullets soon became scarce.

The weapons themselves are varied; if a little limited in number. Between homing weapons, straight shooters, bouncing grenades, and flamethrowers, there’s some interesting options to test out for experienced pilots. Unfortunately, there are shortcomings, which come from the Roguelike elements. The randomly generated stages are compiled by sticking a bunch of pre-made rooms together, and it won’t take more than a few runs to start noticing familiar locations. The variety of items is also an issue. It’s not uncommon for the same laser to drop three or four times in the same stage, and the power level of each weapon is so indistinguishable that I often took my starting weapon all the way to the final boss.

Calling the large reactor cores bosses may be overselling them, too. Each stage ends in a room full of a selection enemies, and a large crystal in need of blasting. As you progress further through the sublevels, the core will begin to shoot out impossibly more lasers. Its not that these encounters aren’t enjoyable, but they never change and you have to battle six every playthrough. Throughout your many journeys through the facility, you’ll also collect Nanites: small white shards that are the closest equivalent to currency. Nanites are used to craft weapons and ship parts by combining two items in your inventory, and if you collect enough on a single stage you’ll be offered a perk. The crafting is pretty threadbare (with a set few options of slightly boosted items to make), and the perks are neither game-changing nor interesting. Regenerating slightly more of a specific ammo when low isn’t going to blow anyone’s mind.

Although it sounds like its got a lot of problems, the moment to moment action is great fun. I found I was enjoying myself more and more as controlling my ship became second nature.

Sublevel Zero Redux is so close to being a great game, there just isn’t enough variety or depth to make it worth playing for long periods of time. Despite that, if you’ve been longing for a new Descent game – there’s still a lot to love here.

A refreshing Zero Gravity FPS let down by it's Roguelike skin. Great moment to moment gameplay, but gets repetitive quickly.