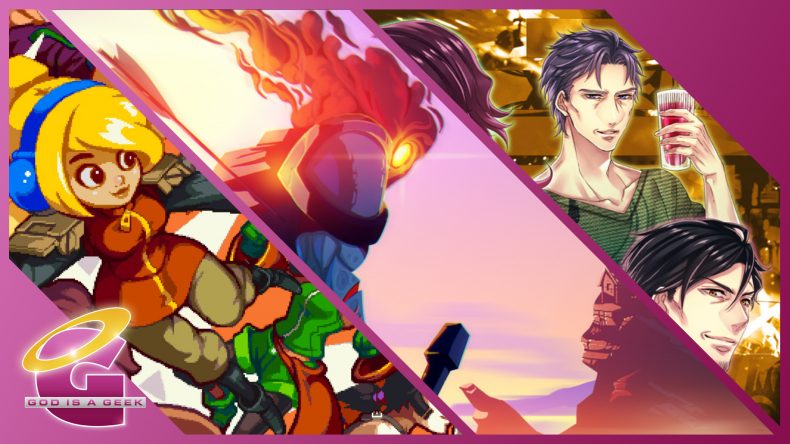 This week sees some really high profile games hit the Switch alongside the other consoles in addition to some late ports. I was hoping August would be a bit relaxing because things are going to get really busy once we hit September. This Re:Port Review has me looking at the port of the fantastic Iconoclasts that hit PS4, PS Vita, and PC a few months ago in addition to another otome visual novel from D3 Publisher while Adam has been playing Dead Cells on literally every platform.

Iconoclasts is a game that only got on my radar closer to the original release. We’ve seen some fantastic indie games in the last few years but the fact that Iconoclasts was made by one person over 7 years, piqued my interest. Every video made it look a bit too good to be true for me. When I finally bought it, I was absolutely blown away. Games of this quality and polish don’t come along that often.

If you’ve never heard of it before, Iconoclasts is a lovely blend of a platformer and a metroidvania game by Joakim Sandberg. It has some gorgeous pixel art and a surprisingly great story. You play as Robin who is a daughter of a mechanic in a world full of excellent boss fights and loads of puzzle sections. In fact the sheer focus on story is surprising given the genre.

When it comes to the actual Switch port, is is almost everything I wanted. Visuals are great in both modes and performance is as smooth as I had hoped it would be. There are some new additions like a new boss rush mode and a new difficulty option but these are all patched into the PlayStation and PC versions as of the Switch launch day. I would’ve loved some nice HD Rumble feedback or some touch screen functionality but other than those things, this is now my preferred version of Iconoclasts.

Despite buying it on PS4 and PS Vita day one, the lack of cross save had me put it on hold on PS4 and slowly play it on Vita. The Vita port is great but this game looks absolutely stunning on the Switch screen. If you haven’t bought it before, this is the version to get. It has all the new content that hit other platforms and all patches right from the get go. Pub Encounter is an otome visual novel from D3 Publisher for the Switch that previous released on Steam and iOS. Unlike most otome games, this one focuses on middle-aged love interests and not the young ones. While it is free to play on iOS, this version includes all the content in the asking price and the love interest variety is pretty good overall.

You play as a woman who is tired of her daily routine who decides to go to a new area. She discovers a bar here and eventually sees loads of potential love interests. As with the other visual novels from the team, once you’re done with the prologue you can select which route to take and progress through the stories (some of which are pretty cliched) until you get the endings. There’s a lot less text here than most full length visual novels but the text has a few translation or localisation issues.

On the Switch, this supports the touchscreen and traditional button controls. It suffers from the same issue where the buttons at the bottom overlap with the dialogue boxes. This isn’t a problem on the iOS version. The art looks really nice in both modes and the music is varied. Sadly there is no voice acting and playing an otome without voice acting is missing out on a lot.

While this is yet another bite sized otome experience from Dogenzaka Lab and D3 Publisher, the slightly different setting will be worth the price of admission for some. I didn’t much care for the new setting but still enjoyed playing through the routes. Hopefully they continue to bring out more of the English otome releases in the future as we wait for Aksys to start localising the Switch releases from Otomate. As of now, this is worth checking out on the Switch if you’re looking for more otome games but can tolerate the budget production values.

Adam Cook
Simultaneously released on all platforms and scored 9.5/10 on Xbox One

If you follow our site at all, you’ll know I’ve been banging on about Dead Cells since it hit early access over a year ago. At this point I’ve played every version of the game and am delighted to say that they are share the incredible performance you’d hope for, including the Switch version. While you won’t get a 4K resolution from the game here, you’re getting portability in which can probably be considered a title that’s a perfect fit for Nintendo’s popular console with it’s randomly generated, run-based action combat and retro aesthetic.

Dead Cells already allows you to save and quit anywhere you want, be it mid-level, safe-area, or boss battle. If you’re traveling or in a waiting room somewhere, you can fire it up and play for ten minutes for some fun, but also some progression. In the retail version there’s a daily challenge mode, which is all about running quickly (you’re timed) through a dungeon and getting to the boss: find some power-ups along the way and have a better time against the boss. It’s a bit of a shame that often, you’ll have to run this challenge 4 times to get a reward, because earlier in the review phase there was often a blueprint reward after the first run. Maybe it’s just a random thing, but it’d be good if every single run garnered some kind of reward, especially on the Switch version. If you do enjoy sharing moments from games through the Switch video capture, it is enabled here so go wild.

Regardless, Dead Cells is one of the best rogue-vania games I’ve ever played. The visuals are to die for and it runs beautifully (docked and handheld), but the best facet is that the combat is ultra responsive. Regardless of play-style (try sword-and-board, you’ll be surprised at how useful shields can be) you will be rewarded, and every time you think you’ve pushed as deep as you can go, you’ll discover improvement that allows you to challenge yourself, and the game. This game is brilliant, and the Switch version, while not the “ultimate” version to buy, is more than good enough if you prefer that format. I truly hope this game doesn’t get lost in the Fall games-melee, because after over a year of open development in the public eye, it deserves adoration and status as one of the very best of 2018.