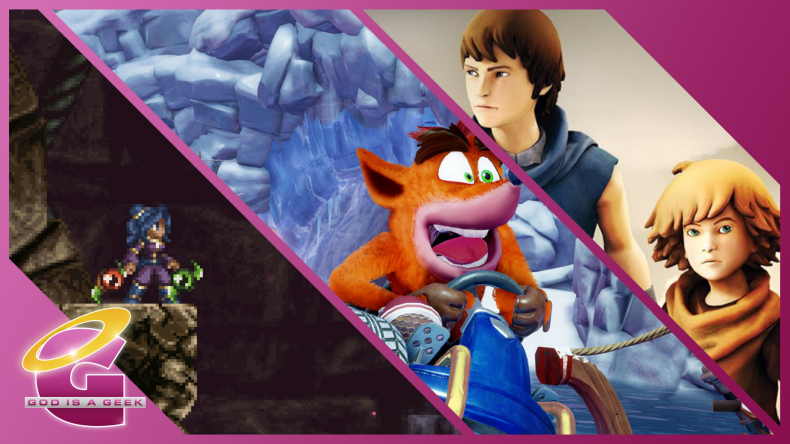 Today’s Switch Re:Port review has an eclectic selection of games both new and old. Nick looks at Crash Team Racing on Switch while Nicola takes a look at the recent port for Resident Evil 0. I’ve been playing Assassin’s Creed III Remastered, Brothers: A Tale of Two Sons, and the excellent Timespinner for today’s Switch Re:Port Review. It has been seventeen years since Resident Evil 0 launched on the GameCube, and now the remaster has made its way onto Switch a few years after it was launched onto the PlayStation 4 and Xbox One. It follows the investigation by S.T.A.R.S officer Rebecca Chambers and convicted criminal Billy Coen of an Umbrella Corporation facility. Deviating slightly from previous Resident Evil instalments it features a partner system where players switch between the two main characters to progress through the levels, sharing items between each other.

In handheld mode the game performs very well with clear visuals and beautifully rendered cut-scenes, but the game does suffer from some lengthy load sequences and transitions between areas that make the inevitable backtracking through previously explored locations a bit of a chore.

Overall, the Switch version is an excellent port of the previous remaster with the same additional content available once you have completed the main story. There is very little to distinguish this version from the previously released HD remasters, the only difference being the portability option that the Switch console offers.

Nick Gillham
Simultaneously released on PS4, Xbox One, and Nintendo Switch and scored 9/10 on PS4 On a console where Mario Kart exists it’s easy to dismiss Beenox’s remaster of Crash Team Racing, a two decade old game made on for considerably more powerful consoles and ported to Switch versus a game made specifically for the console and by Nintendo no less. But, all things considered a wonderful job has been done here to get the game working on Nintendo’s hybrid console.

Obviously graphical fidelity has been toned down somewhat for this version, with docked mode running at 720p there’s a considerable amount of jagged edges and grainy textures around, then in handheld mode resolution is once again reduced this time to 480p, but thankfully the smaller screen size hides the loss of detail quite well with it being hard to tell the difference between docked and handheld at a glance. This is obviously to maintain the 30fps frame rate cap that exists on all versions of the game, meaning that no matter what console you play on you’re guaranteed a similar gameplay experience.

My biggest issue with the game is the joy-cons themselves and those tiny little face buttons that start to dig into my thumb when I hold them down for long periods of time. If you’ve got a pro controller this is the time to use it as the larger buttons are much nicer on the digits. All things considered though for a quick blast with friends singular joy-con control is really welcome, with the controls mapping really well to the smaller button count of a single joy-con, there’s no motion control so it’s down to those sticks and buttons as there’s also no driving assists like there is in Nintendo’s kart racing franchise.

Split screen works well in both docked and handheld modes with the 30fps cap still firmly in place and seemingly no loss in the looks department, another boon for the single joy-con controls the base Switch console offers. Frustratingly though the screen split is vertical and cannot be switched to horizontal, I do not like a vertical split, no siree bob, I don’t like it.

Beenox’s remake job on Switch is worth its position alongside it’s PS4 and Xbox One brethren. A considerable effort has gone into squeezing as much into the games looks as is technologically possible without hampering the gameplay and they’ve done a great job. Trackside detail is immense, and while there is a little loss of finer detail, the characters still look great and the latter tracks look absolutely stunning, it’s a real feat of design on the developers part.

Realistically if you have the choice of which format to get many would plump for the PS4 or Xbox One versions, but I think it’s the Switch version you should plump for, the portability and ease of multiplayer being considerable selling points should you fancy a quick race with a friend. Games like this make you realise that there are quickly becoming less and less reasons why games shouldn’t be ported to Nintendo’s great little machine.

Originally released on PS4, Xbox One, and PC and scored 7/10 on PS4 One of the more surprising additions to the Assassin’s Creed Odyssey Season Pass is the inclusion of a full remaster of not just one but two games in the form of Assassin’s Creed III Remastered. While this was already announced for current home consoles and PC, the inclusion of a Switch version piqued my interest for portable play. Assassin’s Creed III Remastered on PS4 and Xbox One is a mixed bag with various aspects being vastly improved the last generation versions but certain issues like frame drops and glitches holding it back a fair bit.

Assassin’s Creed III Remastered on Switch includes both Assassin’s Creed III and Assassin’s Creed Liberation but the singleplayer DLC from the former is included as free DLC. This is all to ensure the package fits on a 16GB game card which has caused other issues that I’ll get to. In terms of content, Switch isn’t missing anything when you download all the DLC and this marks the first time Assassin’s Creed III has been playable on a portable. Liberation was on PS Vita originally before being made available here in portable form once again.

Before getting into the various issues this port has, it is great to see the image quality for Assassin’s Creed III be pretty great in both docked and handheld modes. Frame rate on the other hand isn’t great but it feels better in portable mode than docked. I thought Liberation would be hitting a locked 30fps target pretty easily since it was a PS Vita game originally but it varies a lot resulting in something that never feels smooth while docked. Liberation feels better in handheld mode as well but not by too much. The biggest issue is the audio which is very compressed. Hopefully Ubisoft either patches in better audio or adds a high quality audio pack as free DLC for the release. The touchscreen functionality included is very nice.

Overall, this is definitely a version to avoid unless you absolutely need portable play over everything. The cutbacks across the board are more than what I saw in Dark Souls Remastered on Switch and it has worse audio issues and glitches. The fact remains that Assassin’s Creed III itself hasn’t aged brilliantly compared to other games in the franchise like Black Flag that was on the Wii U and would’ve been a better game to play on the go with a Switch port.

Originally released on PS4, PS Vita, and PC before seeing a Nintendo Switch and Xbox One port When Timespinner by Lunar Ray Games and Chucklefish was announced for a release on PlayStation and PC platforms, I was very excited because it looked like a super polished metroidvania platformer with gorgeous art and animations. I ended up passing on it initially for whatever reason but I’m glad the Switch port has arrived letting me play an excellent game.

Timespinner has you playing as Lunais who is taken to a new unknown world after a traumatic experience. She has the ability to control time and uses it to take revenge. The story itself isn’t amazing but it does its job. The real draw here is the gorgeous visuals and the superb gameplay that never gets old. The metroidvania aspect here is better than most indie games and it has almost no padding. You could finish Timespinner in under 8 hours which some people might find too little but it has allowed the developers to not waste your time with a nicely paced experience.

When it comes to Switch specific features, Timespinner doesn’t really do anything special. There isn’t any touchscreen support but the game does support the native Nintendo Switch video recording that many games seem to ignore for some reason. Thankfully text looks very nice and crisp in handheld mode as well as docked. Many games with stylised text in interfaces often don’t account for handheld mode. Timespinner looks ace regardless of how you play it on Switch.

Overall, I cannot recommend Timespinner enough. The Switch port is fantastic and the game itself is special. My biggest disappointment is not being able to back the Kickstarter project because I had no idea about it then. I know most people who enjoyed Castlevania: Symphony of the Night will likely be enjoying Bloodstained: Ritual of the Night right now but Timespinner is something you absolutely need to play.

Brothers: A Tale of Two Sons Brothers: A Tale of Two Sons from Turn Me Up Games was a very interesting game when it debuted in August 2013 on Xbox Live Arcade. The use of both analog sticks to control two characters and solve puzzles was excellent and it delivered its story brilliantly. In 2019, after being ported just about everywhere including iOS and Android, Brothers: A Tale of Two Sons is now available on Nintendo Switch with some exclusive content.

Brothers: A Tale of Two Sons runs very well and looks as you’d expect in both docked and handheld modes. The only visual issues I noticed are flickering shadows in some situations. This game is about 6 years old and it would be surprising to see it have trouble on the Switch but I’ve been proven wrong multiple times in the past. Since there isn’t any achievement support on Switch overall, some developers add their own achievements in games. Brothers: A Tale of Two Sons has its own in game achievements. In terms of bonus content, this port has an art gallery, a sound gallery for music, and a commentary video from Josef Fares talking about gameplay elements.

When it comes to exclusive features and use of the Switch functionality, Brothers: A Tale of Two Sons doesn’t do much beyond offering single Joy-Con support for co-op play. There is no touchscreen functionality despite having a mobile port. The addition of co-op play in general is excellent though.

Overall, if you haven’t played Brothers: A Tale of Two Sons before, this is definitely the version to get since it has an all new proper co-op mode including single Joy-Con support for you to be able to experience this short story on the go with a ready to go co-op setup. If you’ve already played the game, there isn’t much value in getting it again since the main draw is the puzzles and experiencing them for the first time.